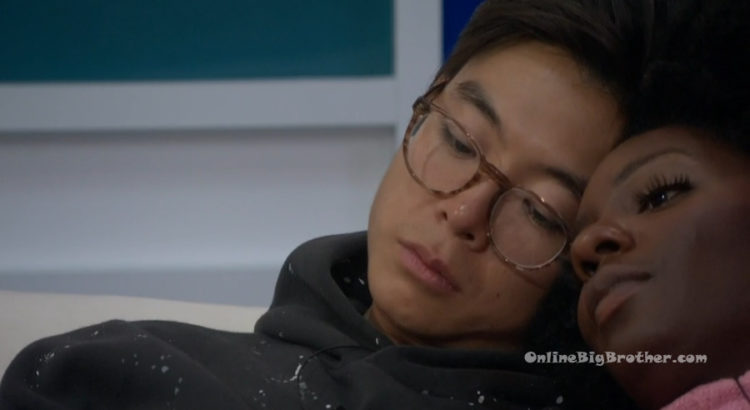 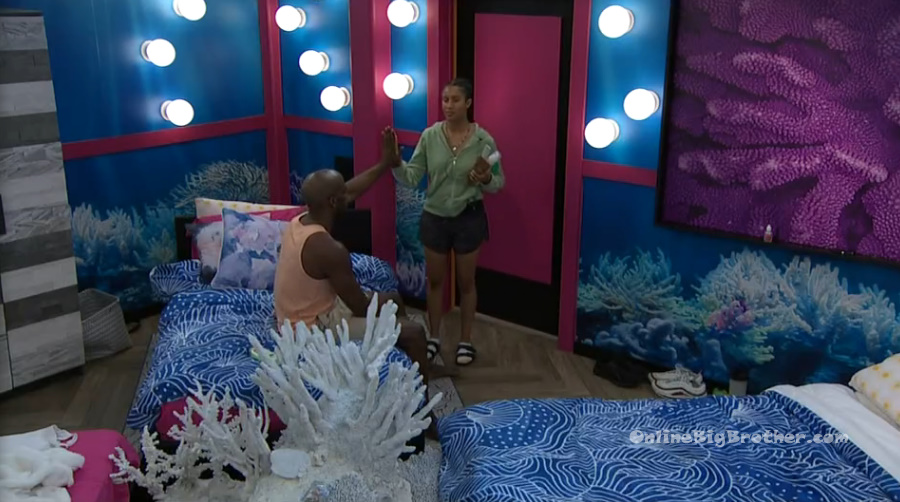 12pm Bedroom. Hannah and Xavier.
Hannah – I am feeling a bit of nervous energy. Xavier – why? Hannh – for the veto. You know I’m not a very strong competitor. Xavier – you’re a very strong competitor. Hannah – no I’m not. Xavier – yes you are. You’re huge competitor. You have BFE! Big Fish Energy. Hannah – you saw that I almost fainted when I had to play in the Wildcard competition. Almost fainted. Like shaking. But I am also pretty excited. Xavier – to compete? Or just to have fun? Hannah – to play in a veto competition. It was on my BB bucket list. Xavier – well go out there and do you best. Try your best. That’s all that you can do. If you win great, if you don’t at least you know you didn’t throw it. Hannah – yeah, we don’t throw competitions in here. Xavier – we’re out here to win. That’s why I was in that room last week. We’re out here winning. Hannah – but this time its different its my team. Xavier – I think you’re a good competitor .. you just haven’t found your competition yet. What I want you to do is when you’re sharing information with people, make sure its the right people. Hannah – yeah .. so you, Ky and Tiff. Xavier – there you go. That is pretty much as far as you should go. And outside of that people might take something you said and twist it and then use it against you. Hannah – even with Derek X I have to filter. Xavier – Like he is someone I think you can trust but he is not a good liar. So if someone asks him a question about something you might have told him .. he might be like Ahhhh.. and then spill the beans. Hannah – no I agree with you. Xavier – I think you’ve handled going on the block well and even if noms stay the same I don’t think you’re in a difficult position. Hannah – you don’t think SB would try to flip the vote? Xavier – even if she did .. this is Christian’s HOH not hers. Hannah – and I have the numbers. 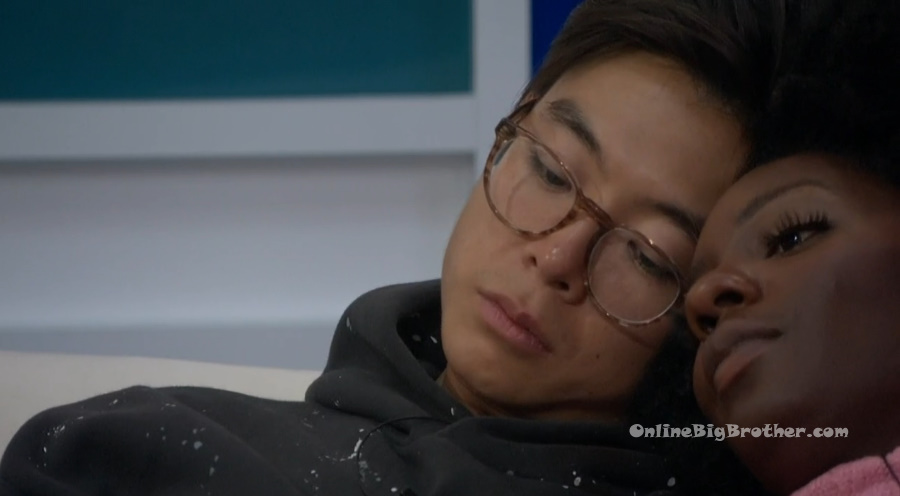 Living room. Azah and Derek X.
Azah – I need to reset in this game because I feel like Brent and Whitney have had a lot of influence in this game. I feel like the Kings are definitely running this game this week but the next HOH is going to determine a lot of stuff and I feel like the whole house is going to reset. I think the obvious objective move is to have everyone on an even playing field. And it is going to be who is brave enough to make that decision. I am not going to lie, I am afraid. I haven’t been afraid in this game at all but this is the first time I am afraid because now its fighting against morals and stuff. Right now the jokers have been like a punching bag. We are the weakest team and we are viewed as expendable to a lot of people. But he (Christian) really gave us a break this week which I am very appreciative of. If I turn around and bite his team in the a$$ its going to go against my morals. So I have to pray about a lot of stuff this week about how I’m going to play the game. So that’s what I’m battling against right now. Its obvious, they (The Kings) need a player down. When you think about jury. When you think about a lot of things .. its obvious they need to be the one to go next week. I mean he could have just finished us off and given an open avenue to the rest of the house to get to jury by just picking us off. Which was very nice of him especially not having any relationship with him. So if I win I have to figure out if I am going to play the game or am I going to be nice. Derek – there is the question .. do you think in the long term that they would work with your team? At some point they have to start taking shots. Azah – but if they don’t have one person down, we’re looking at a king definitely winning. Derek – the entire game? Azah – yup! They set it up really well .. in his speech he set it up for us to go against each other. He said in the meetings it came up that the Aces have to go. 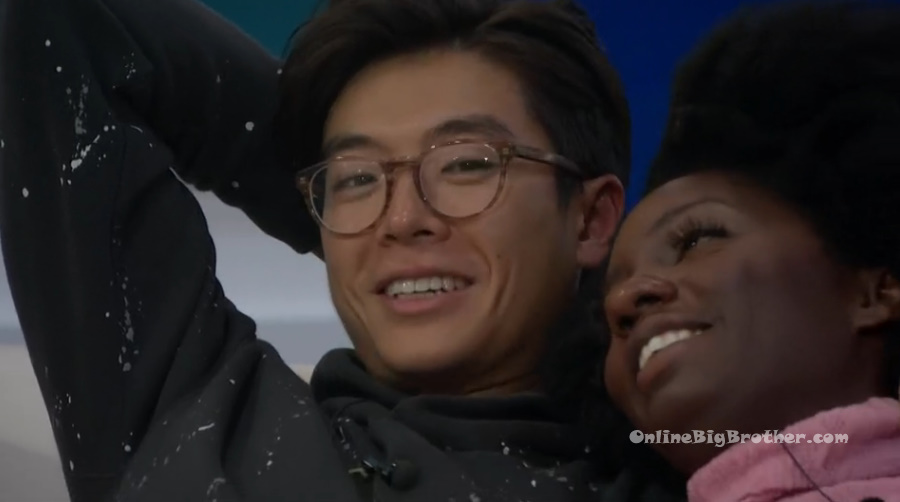 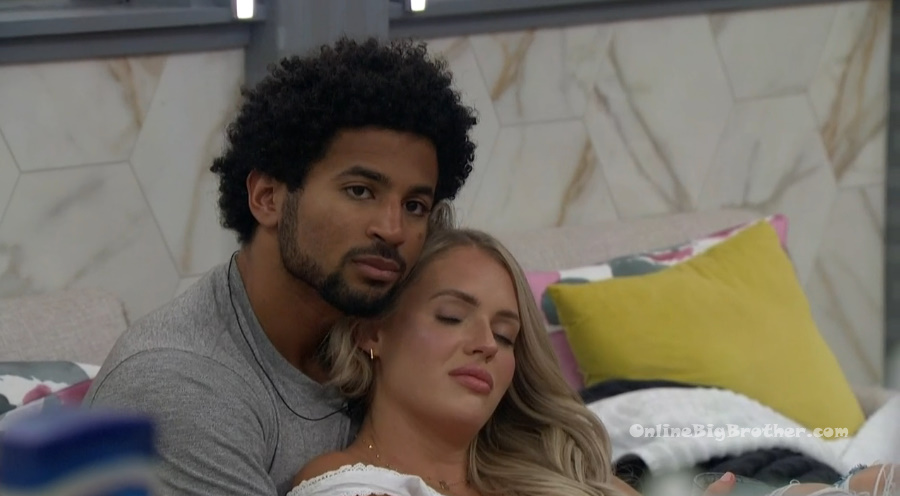 1:10pm Storage room. Ky and Xavier.
Kyland – say noms stay the same, have you asked the Jokers how they would feel voting out Hannah because that would be enough votes? And it would be smart move because even if the jokers say yes and don’t do it… it would be 3 to whatever the vote is and they would still save face because no one would know where the votes actually come from. That would be a smart move on their part. Alyssa and Azah come into the room and Kyland leaves.

2:10pm The house guests are sitting around waiting for the veto competition to start.

2:15pm The feeds switch to the kitty / puppy pound for the power of veto competition to start…

Show your support :) Without your support this site and these spoilers wouldn’t be possible.
Please consider a donation to keep the madness going.

Azah, you should have left your morals at the door. You are playing Big Brother!

Azah should say it differently so that when the time comes she can get someone to make the move on the Kings for her. She definitely should not have said that to Derek X because that’s something he can use in the future

The Beef(@the-beef)
Reply to  Chrissy

Azah’s game play is absolutely weak! She has done nothing to help her alliance get further in the game, and in fact has fought against them when they were trying to make moves to protect themselves and each other in previous weeks. Now she’s worried about the Kings, when before all she was worried about was protecting her teammate, and she didn’t give a damn about her alliance and the possible bad situation she may have been putting them in! I understand her moral dilemma, but she doesn’t seem to have a strategic bone in her body, or if she does, they seem to be twisted askew somehow, and out of focus, so they are looking in the wrong direction, every single time. Why is she talking to Derek X about this? Why isn’t she talking to one of her alliance members like Kyland or Tiffany about it? I understand her reluctance to talk to Xavier, since he IS a King, but she should be able to talk to some of the others about it, and maybe figure out a strategy to fix this 4 Kings mess! She might have to do a little back stabbing though, as I’m sure Christian and Alyssa would have no problem doing to her if the situation was right. She seems to think they didn’t put a Joker up because they were “nice” to them or something. Again, just goes to show how weak her game is. They did what they thought was BEST for their game! Azah needs to learn how this game is played, and fast, before she’s gone out that front door!

Kailei(@kailei)
Reply to  The Beef

Good riddance. She is frustrating.

I hope the love birds know that they are prime targets next after this week. All in all, Hannah is the biggest threat imo, good social game & will kill at the mental comps….. SB is right in her assessment of H and they have a chance to get her out now. Of course that would only happen if they had a Ky , X or Tiff up next to her, which will probably not happen….Hannah is the silent assassin this season

She definitely has potential.

This is a BORING snoozefest.