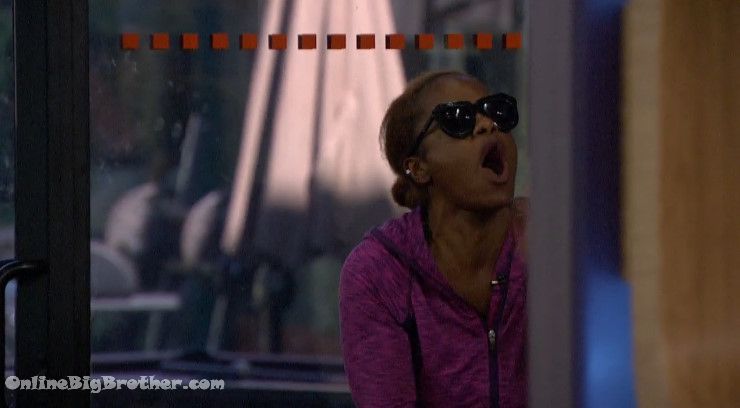 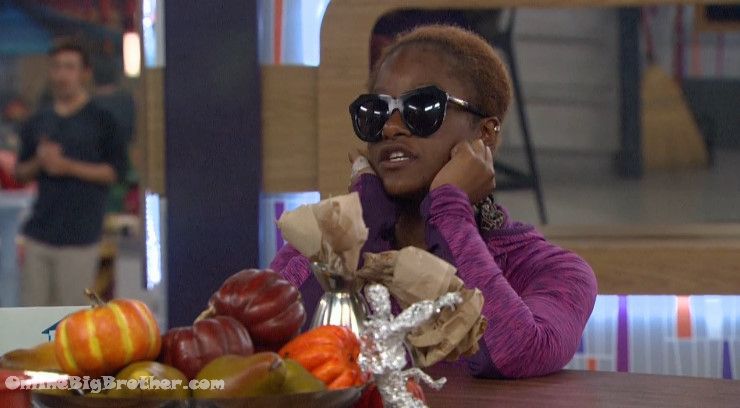 Neeley and Scott fight
Neely – Scott’s been campaigning all night
Alex – Scott’s a super fan he’s not going down without a fight
Scott joins them
Neeley – I’m not going to be like these other mother f****rs
Neeley – I knopw how you really are .. I Had no Drama with you I had no issue with you
Neely – you talked sh1t about me and tried to come after me
Scott – I’ve never talked sh1t about you
Neeley – I had no issue with you 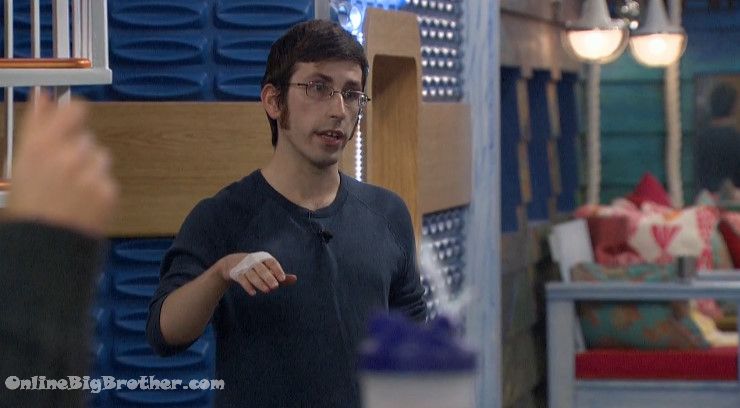 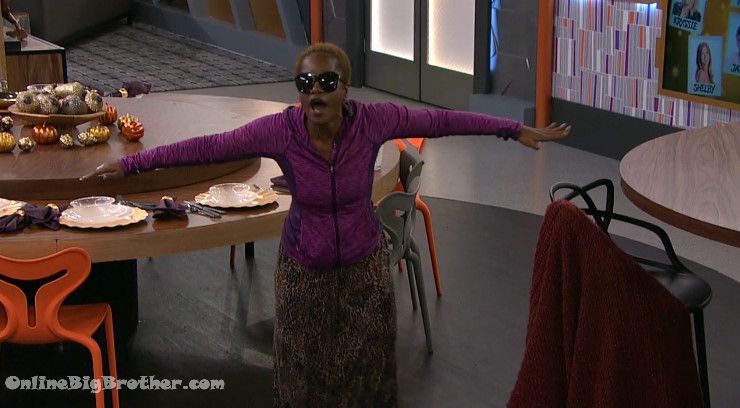 Neeley – you don’t have to come at me like that at all
Scott – I’ve never said a negative word about you
Neeley – don’t be trying to throw my name under the bus .. talking bad about me
Scott – Never.. I’ve never said a bad word to anyone
Neeley – no one in this house should trust you .. Day one.. that shit is gone.. why should any of them trust you when you can’t keep your day 1 alliance intact
Scott – Shane couldn’t keep it intact
Neeley – Yes and you got rid of him .. and you want to terrorize Danielle I hope America sees that 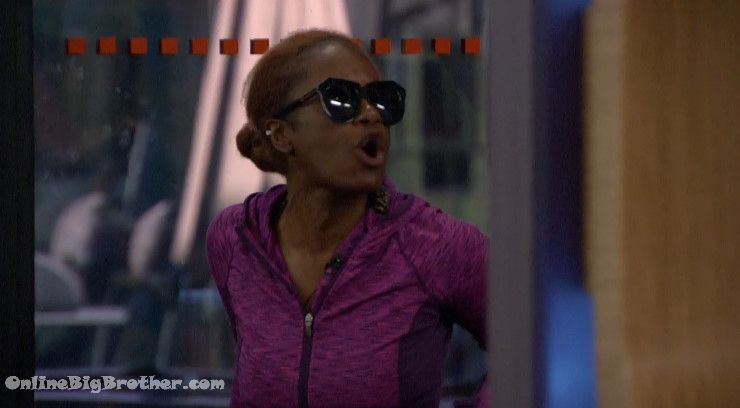 Neeley – he wants to bully Danielle that’s his game plan..
Scott – mark those words America
Neeley – America sees you for who you are
Scott – I’ve never said a bad thing about you Neeley
Neeley – on the purple spirit day you want to bully somebody..
Neeley turns to the girls says Scott is here for his stipend she’s here to play. Again brings up Scott not keeping to his day 1 alliance.
Neeley – you ticked me off dog
SCott again tells her he’s never said a bad thing about her he’s just campaigning to stay in the game.
Neeley – don’t come to my friends with some bullshit how I’m going to flip on people
SCott – I’ve never said a bad word
Neeley – You’re the only one that’s flipped.. Alex knows for a fact week 2 how you went to each individual sides getting information..
Scott – who did I give information too
Neeley – you are not trustworthy you are not loyal so don’t act like you’re a better bet 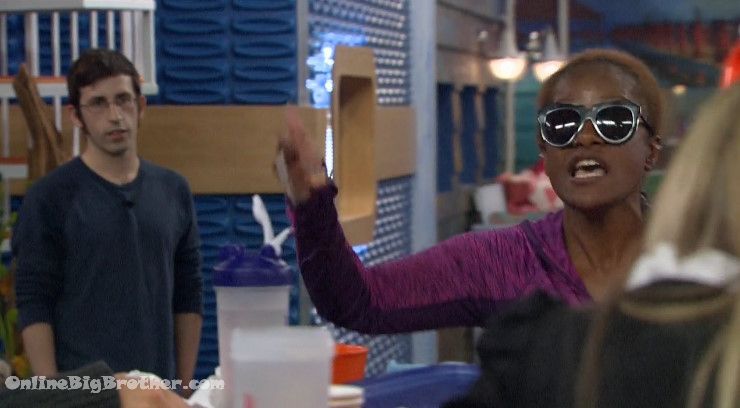 Neeley – you sold everyone of them out last night.. 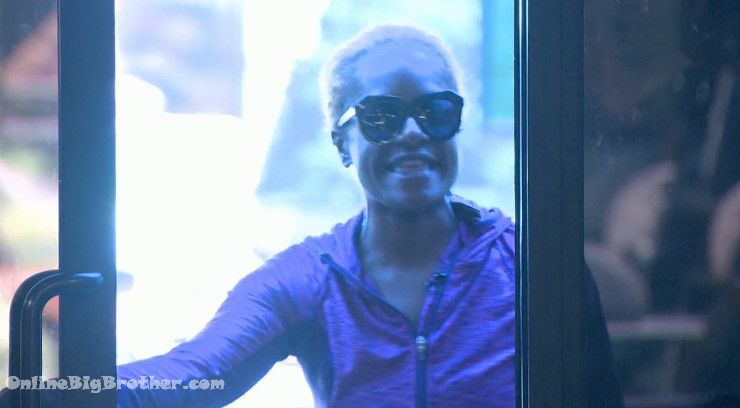 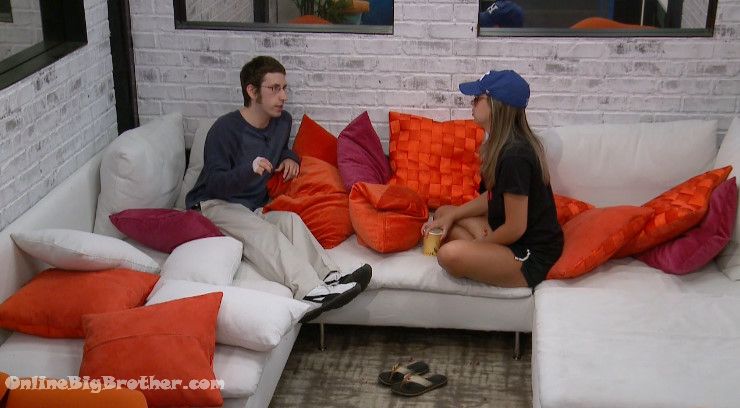 11:23am yoga room Whitney and Scott
Scott says he’s going to be fighting to stay until the very end. Mention how last night he tried to get Justins’ and Jason’s vote. He had gone over what he was saying to Alex.
Scott – Basically if Alex tells me to jump I say how high..
Scott says he feels bad for screwing up Alex’s game and he’ll do whatever it takes to help her.
Scott going on about how he has to win a bunch of competitions to “Make it up to Alex”
Scott says Kryssie walked in on him saying he was going to make Danielle’s life a living hell and now Neeley is running around calling him a bully.
Scott – that goes against Purple day and CBS you’re a horrible person”
Scott – I’ve never said anything about Neeley personally.. I’ve said bad things about Danielle sure.. she’s a spoiled brat and has entitlement issues.
Scott thinks Neeley did all that in the kitchen to make s scene.
Whitney agrees says it made her look stupid. Confirms all the girls are voting to evict Neeley. 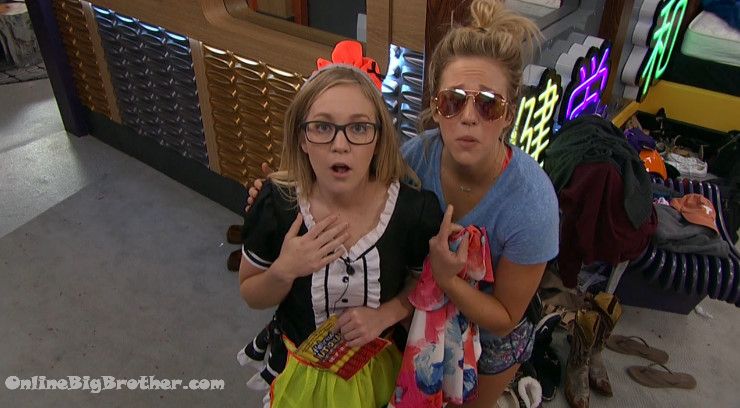 12:37pm Sisters
Talking about how Neeley is blundering.
Alex says Whitney might try one more time to get Justin to keep Scott but she’s thinking the vote will be a tie. It’s up to America.
the sisters look at the camera asking Amercia to keep Scott for them. 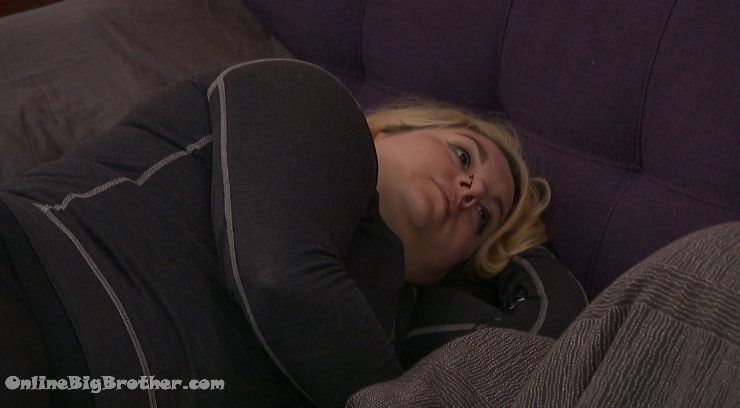 2:26pm Kryssie and Neeley
Kryssie – I don’t want you to go
Neeley – I go a lot more game to play
Neeley about Scott – He f***G sucks
Kryssie – I feel in my heart of hearts the only reason America nominated you was Scott was off the table and so was Alex.
Neeley – they gave her the package they wanted her safe anyways..
Kryssie – I don’t think they wanted her safe.. (ZOMG)
Kryssie – America has a bizarre sense of humour in all this.. Whatever happens I think they saved Alex so they could see her be my servant for a week. I honestly think that is what it was
Neeley agrees it was funny.
Kryssie – America doesn’t want to see her stick around (Alex)
Neeley says she’s super friendly with people.
Kryssie says she feels it in her gut and her gut is always right.

That is a good one! Vote Shelby for next care package. BB should put Krackles in it for her. Love to see lnj faces. Priceless!

So sick of hearing of her gut, and believing in her “heart of hearts”. Your gut sucks Kryssie. Just start doing the opposite of whatever it tells you.

OMG… Scott there is nothing wrong with playing for yourself. Alex has her own game to play she’s not going to make the same sacrifice for you. I really wish HG wouldn’t play this way. Sacrifice their game to help another. I’m playing the game to win not lose.

Lol neely is so crazy scott has been getting alot of heat all season for no reason first when shane gets rid monte and coenbread who cares but scott gets rid shane its like what about ur day 1 alliance you cant be trusted lol wtf???? Im unsure if most these people understand this is big brother people arent just gonna say ok you dont likenhim or her so everyone is voting because your feelings matter gtfoh

LNJ is soooo delusional. Not to say Scott is sane, but WTF. Krissey saying we only kept Alex safe so she could wait on Kirssey? That was just a side effect of keeping Alex safe.

The only person that has any redeeming character on the LNJ side is Justin and he is floating between sides.

For the record, I do not always agree with the other side of the hose and what they do – like harass Dani.

But Spitting in the tub, rubbing armpits on pillows, the level of trash talk, the hyprocrytic behavior and words,, OH MY I have no words left but to say – evict them so Dani can go take a nap and not get paid for it, Krissy and heal her overly wounded hand (yea right), Jason can go back and keep his vulgar rants to those who want to hear it, etc..

Then we get to see real fireworks – The other side being strategic on who they are bringing and taking out.

Apparantly today the hypocridiots called Shelby a c*m dumpster and Justin called her a c-nt behind her back and said to her face he hates her guts. Sorry Justin, Im done with you bro.

Im so glad to hear people are done with Justin. To me he’s annoying, he’s playing both sides, and he’s just not a good player at all. He needs to be a have not for sure next week along with Kryssie and Danielle.

Why does everyone love Shelby so much. She’s a bitch to everyone on the other side. Always making rude and nasty comments. And just the other day Danelle asked her a question and she deliberately ignored her. There’s a reason why everyone hates her.

Jason and his alliances hatred of her is beyond belief. I have seen alot of love for Shelby from fans. I respect her for leaving the hypocridiots as she much prefers the company of the girls, and did not care if she was aligned with Jason when it was revealed how heavily America would influence the show. She is quirky, funny, feisty and undercover smart. I like her humorous and energetic DRs. I enjoy her banter and silly dances, particularly when she dances with Morgan. I think she is fun to watch.

So as long as you’re quirky and funny it’s ok to be complete asshole? Got it. Looks like you’re the Hypocridiot.

Yeah I'm mad and proud of it
Reply to  Anonymous

Such a genius comeback. Bro!

Genius
Reply to  Yeah I'm mad and proud of it

It’s called sarcasm. Look it up. You forgot to add the last part to your name. “In my own mind”. Not sarcasm. Get the picture now?

But Jason called her far worst than Justin “one word” comment of Shelby. Jason is the most rude oboxnious disrepectful to the girls than Justin. If u want to be outraged than at least be honest about.

I agree Jason has been far worse, but doesnt mean Justin gets a pass when he calls someone the c word.

Wow! What’s the big deal with someone calling a c**t a c**t? It’s no different than calling someone an a-hole or a di*khead or a dumb tw*t! It’s just a word.! You guys are acting like it’s the equivalent of stabbing them in the eye with a pencil?!?

OMG this girl is disillusional! Didn’t she tell the girls they were Have Nots because America hates them? Can’t wait for Neeley to GO

My gurl ain’t going nowhere! Tell that cracker like it is!! Missing you dady!

Really can’t stand the sisters. I hope someone finds out about them soon – not sure how that can’t tell they aren’t.

Someone really needs to give Neeley a Snickers

LOL !!! Post of the day!!! LNJ needs a couple of cases of Snickers just to take edge off.

It’s the funniest BB video EVER!

This is so freakingly, disgustingly hilarious. Someone took the audio of Kryssie’s and Scott’s performance during the Veto Comp and mashed them up to make a sex tape!!! So disturbing, so funny!

Simon can you please do a gif of the Shelby Pi 3.14 dance with her bouncing on the ball at around 3:14pm to 3:15pm today? Thanks if you can but if not no worries.

Lol America Loves Alex and scott!!! Nelly out this week. Kryssie on slop next. She will crumble. Great tv!! Game players are definitely Alex and Scott.

Does anyone remember Josie and the pussycats theme song? I know it’s random but if the BS and Justin made an alliance.. I can hear them singing along as Justin and the Ball Smashers.. lol

Scottie and the Hotties!

What a time to be alive!

Worst mistake was sending Neely home. Scott should of been kicked out the door. I pray he gets evicted next weel