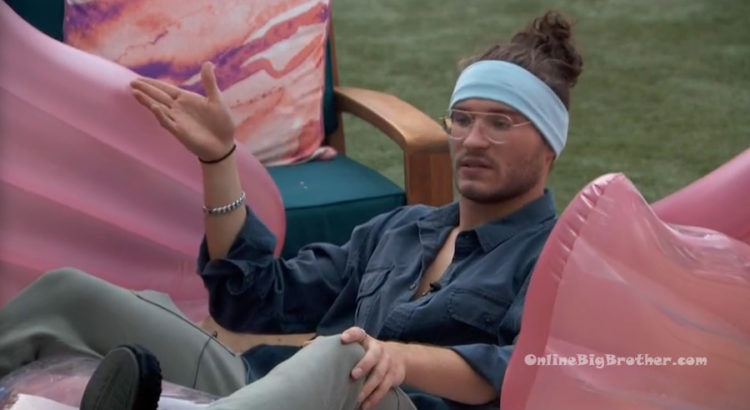 Big Brother Spoilers – Christian is the target. Feeds are getting blocked like crazy again so if updates seem odder than usual I’ll blame it on that. 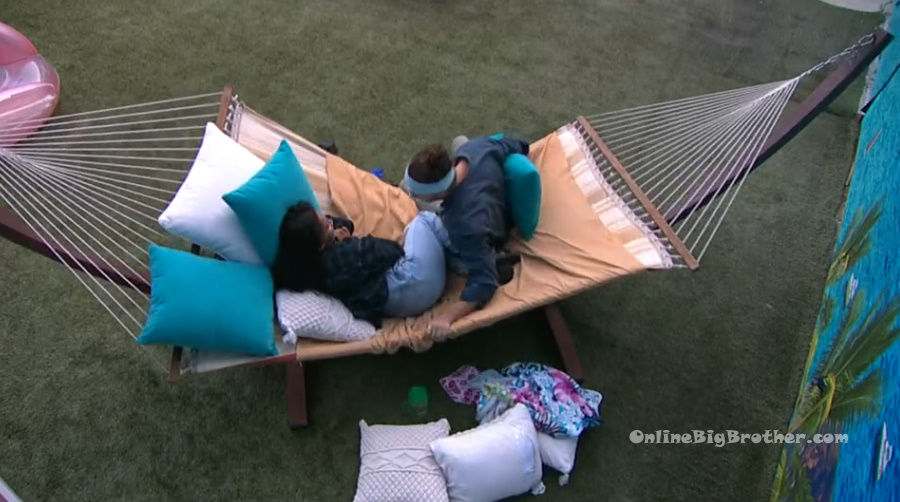 7:25pm Hammock – Hannah and Christian.
Hannah – I think when I leave here they’re going to send me straight to therapy. Christian – you think so? Hannah – yeah. 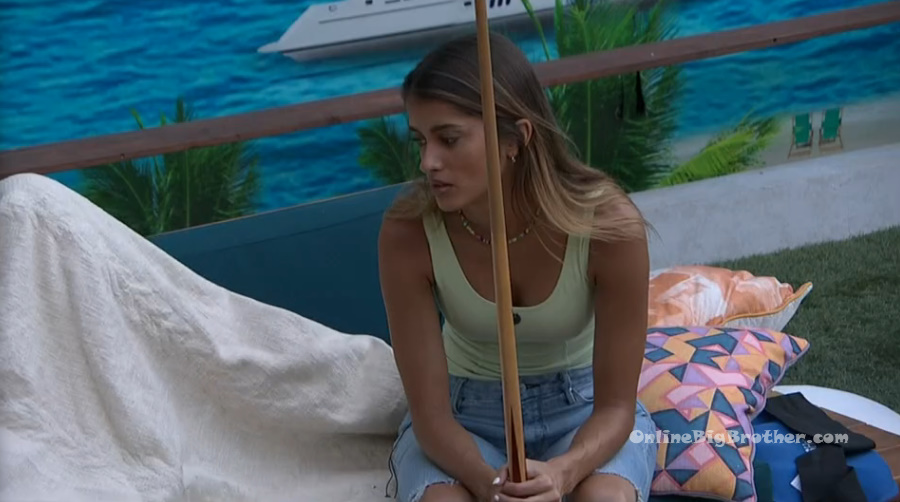 Backyard couch – Alyssa & Azah
Alyssa – I don’t want to say good game reasons about someone and that makes the other person look bad. Hannah – that makes sense. Alyssa – because game and personal I don’t want either one to leave. I feel like I am just in a tough situation. I think there is a lot of .. see I don’t want to say it because I don’t want to say anything bad. I think for .. for the jokers there are a lot of valid reasons for one person to stay. Azah – yeah, Christina and I talked and he had a lot of good reasons why he should stay. He told me what he was going to say about number-wise. If he stays, that’s the target. I am probably next to him. If he stays you guys aren’t the target. Britini isn’t even a pawn. But if he stays and wins, then you guys aren’t a target either. If he goes, its free reign. If we all stick together like last week, then that would be 6 against 4 in the HOH. So its almost like how a lot of people want to vote with the house… like we’re now the house. Which is crazy because its either been the jokers or the kings. Now the two teams that have been the target are the house and the other people can squirm. But the same team girl-wise it would be good to have SB. Azah – MMmmmhmMMm. Alyssa – but then that would be 5 against 5. Azah – on a numbers level and on a lot of other levels it makes sense for Christian to stay. I am thinking about it. I want to give myself time to think. Alyssa – that’s what I said to him, say your points and then let them sit on it. You have plenty of time. I think it was more of a shock. I genuinely feel bad because he had all the power last week and I along with other people said there is no reason to make that move against Derek and he agreed and he was loyal to Derek. I won’t come after you, if you don’t come after me. And then I couldn’t stay up on the wall and I failed. Azah – you didn’t fail. Alyssa – I just feel bad because he had no opportunity to try and I had two and I failed. Azah – you did you best. You can’t beat yourself up about it. But its the game. Its not even like I am upset personally.. it just sucks because everyone is like you have to separate yourself because you’re next. He is like my best friend in the house. Azah – you do what you feel like doing. Christian joins them.

7:58pm Hammock – Christian and Alyssa.
Christian – if I stay or when I stay and he (Derek X) doesn’t know it .. it will be nice. I just don’t want to think I have the votes and then I go home too. You know!? Alyssa – yeah. Christian – what is the vibe you got off of Azah? Alyssa – she said you made really good points. Christian – yeah, that’s the vibe I got. Alyssa – like really good points. And I told her how I don’t want to say good things about your game and for it to affect SB. And I don’t want to say good things about SB and for it to affect your game. She was like I think you should. Christian – say good points about me. Alyssa – yeah. But I only should if there is a chance. I don’t want to ruin my game if there is no chance. Christian – did she say anything about being persuaded? Alyssa – no, just that you made really good points and that she just needs to think about them. Christian – so I spoke to Britini .. I was like Brit, this is the plan buddy! We’ve got a lot of time and a lot of days to do this. So the way it is going to work out is today I planted a few seeds in peoples heads .. Tomorrow, who is closest to Azah? Who talks game with Azah? She said I talk game with Azah, Big D talks game with Azah. That’s about it from what I see. Okay, so perfect. So tomorrow either you and Azah or you, Big D and Azah need to have a discussion.. Because Azah is not going to tell me if I have her vote. I think she will strongly suggest it. Or strongly suggest I don’t have it. But what you need to do is let me know where her head is at because I don’t think I am going to know unless you tell me. Brit’s job tomorrow is to see where Azah’s head is at. In the event that Azah is going to keep me, I would go to Tiffany and Claire and say hey listen… In the event that I have the votes to stay because all of the jokers are keeping me. Alyssa – but keep it as IF .. so that they don’t go and run to Derek. Christian – I said in the event.. if .. I have the votes to stay would you go with the house.. Big Brother blocks the feeds. Alyssa – in the event you stay.. when you stay .. The four thing is done! Christian – but we can’t let them think that it is. Alyssa – right. Christian – I don’t know who the four is moving forward. I don’t give a f**k! Alyssa – really it is just me you and X. Christian – we’re three. Alyssa – We really thought we were doing good. We suck! We suck at this game! Christian – We really thought we were in control. I knew X making that deal and dropping was not the right thing to do. Alyssa – I wish I didn’t slip. Christian – yeah but you tried your hardest, X gave up. That’s why I am more upset. Alyssa – I will be so miserable if you leave. 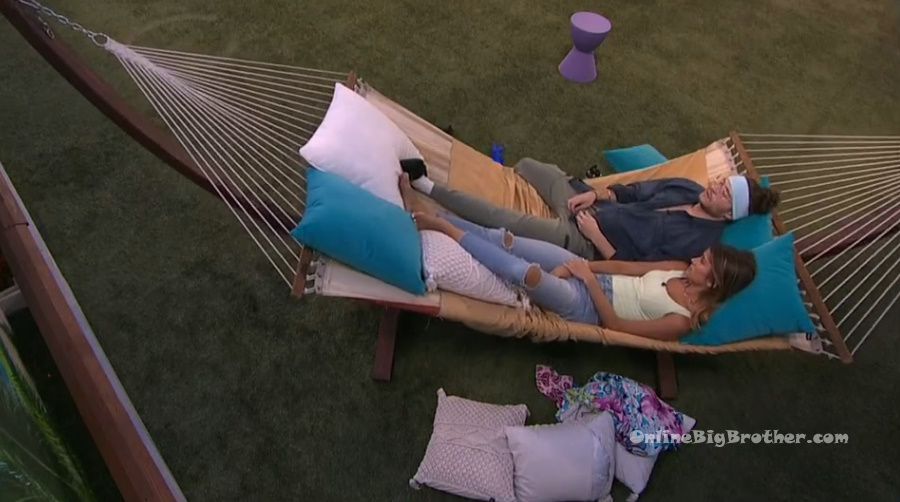 8:39pm Bathroom – Tiffany and Kyland.
Tiffany – I think with time he will make the right decision because it will really jeopardize our six if Christian stays. Because Christian and Xavier are going to come for DX and honestly that messes up your game, Hannah’s game, my game and Claire’s game. And even though Claire isn’t with us and DX isn’t with us .. it is still three of us. And DX would work with X too. Ky – and DX literally feels like he has not choice. Tiff – the only thing that bothers me is that I don’t fully trust Alyssa .. I want her to keep working with me and I want her to be comfortable with me but I think that Alyssa will be coming for DX and I can’t have that either. Ky – no. Tiff – but I think I can beat her in a competition and DX can too. Ky – and Hannah can too. Tiff – if he wants to keep Alyssa till the end, then keep her till the end but that shows that she is the weaker person. Ky – but I know that she is stronger than she lets on.

9:04pm Bedroom. Britini and Azah.
Brit – …especially if I tell her that I am voting for Christian and I flip it. Azah – they have us in a very weird position. Asking about HOH stuff.. I don’t give a f**k about that. I want a letter. Brit – We just need to win it. Azah – I don’t know what to tell them. It is very interesting though.. they said pick anybody but Alyssa. That shows how bond strong that is. But they don’t care about X? Brit – I feel like that is the conversation we need to have is with X because we’re getting no answers over there. If we are seriously sending him home this week to save our a$$ for next week. X has a much better chance of winning this comp than she does if its mental. So that is who we need to be talking to.. and maybe we do mention this deal. Like look Christian presented this deal but he only assured safety for one person and it wasn’t you but we want to know where you stand. What are you doing next week if you get it? Do we need to worry. Azah – I don’t even know if he is going to go for it. He is in a weird place right now. Brit – everyone would go after them. EVERYONE! We just need to beat Alyssa. I know we can do it. Let it be a puzzle!! All this crap about we got your back… NO you don’t! You threw us under the bus this week. Because you literally told them that we were your damn targets. Alyssa said if Christian goes home next weeks target is Alyssa and I am the pawn next to her. They think Ky ran the HOH and they referred to DX as a word that I am not going to repeat because he can’t make his own decisions in this house. 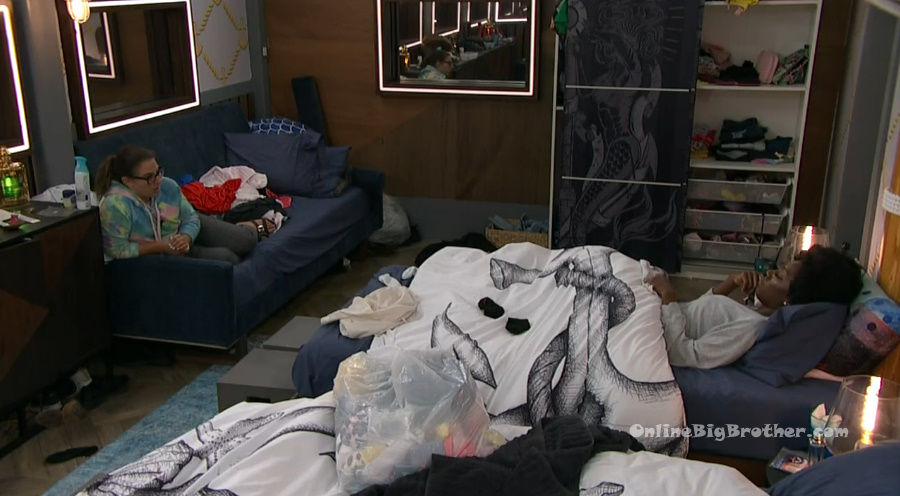 9:33pm The house guests are cooking dinner .. while dancing and singing..

Show your support 🙂 Without your support this site and these spoilers wouldn’t be possible.
Please consider a donation to keep the madness going.

If Ch stays and wins HOH, then it will be an honorary Joker’s HOH.

If Ch stays and Alyssa wins HOH, if Brit/Azah vote to keep Christian, she won’t put them on the block.

The deal doesn’t include Xavier, is only a Ch/Al deal with the jokers.

If Christian goes, then Brit will be used as a pawn to get Alyssa.

Christian earlier said Dx is a pussy because Ky ran his HOH. He said this to Brit, who thinks she is fourth ass in assistant assassin this week.

I’m going to have to say that was not a good meeting.
Oh, they’re going to think it was great. I don’t think I can watch if they celebrate how great that went. (….. without popcorn).
I sort of feel pity, because they’re trying, but isolated themselves to play have not sibling games while everyone else was gaming.
I’d like to see some improvement in their campaigning for round 2.
I’m serious about that.

Yeah the Kings forgot the cardinal rule b/c they held power for 2 straight weeks & forgot never to get too comfortable. Alyssa’s convo’s were interesting as she spent equal time worrying about her position post eviction as she did pitching to keep Chris.

More pressing for me and I wanted to ask your opinion on is this power struggle going on. I’m going to post it separate (see next page) b/c it’s long – hope you get a chance to see it & let me now your thoughts.

The season of pity continues. Would you rather win based off gameplay or just because they finally forced a POC to win? It would almost seem embarrassing to win this season

Tiff has been getting on my nerves and the CO. I’m still #TeamX but his game has been off this week. He needs to either stick to Kings or just CO. Even if I’m not fan of Tiff her gameplay has been good but she needs to watch what she says or her game will blowup. People are starting to wonder about an underground alliance. Last but not least how will America’s twist effect the game? #ByeByeChristian