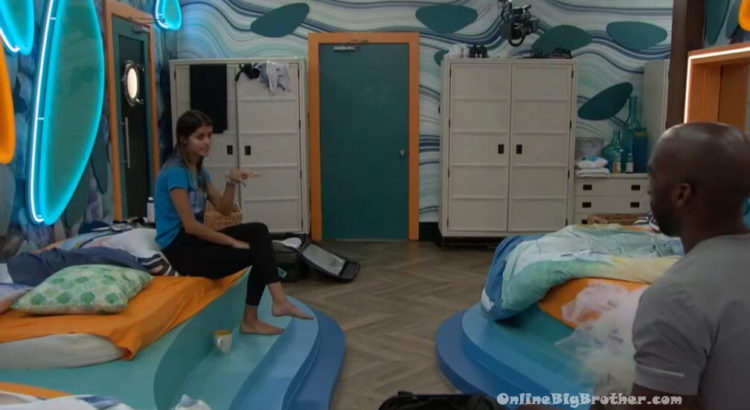 Big Brother Spoilers – Claire is going to be evicted. 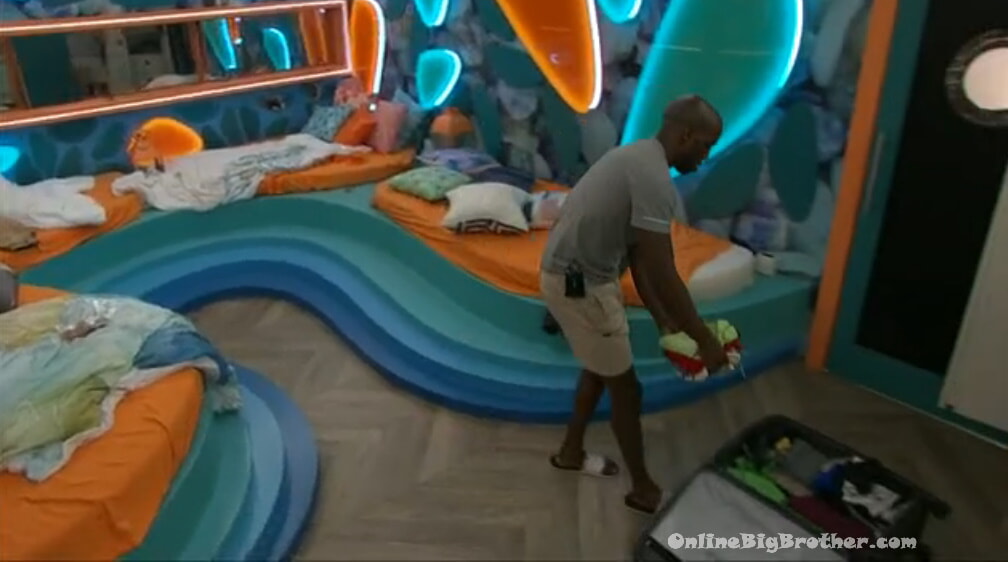 12:44 pm Houseguest packing up their stuff.

Tiffany comments on X packing “this is the neatest man I’ve ever met in my life. I am jealous”
X – I hate it when things are unorganized.
Tiff – when this is over you are going to met Christian and tell him this is what a man does it’s not just your mom.. (LOL, Christian is her son) 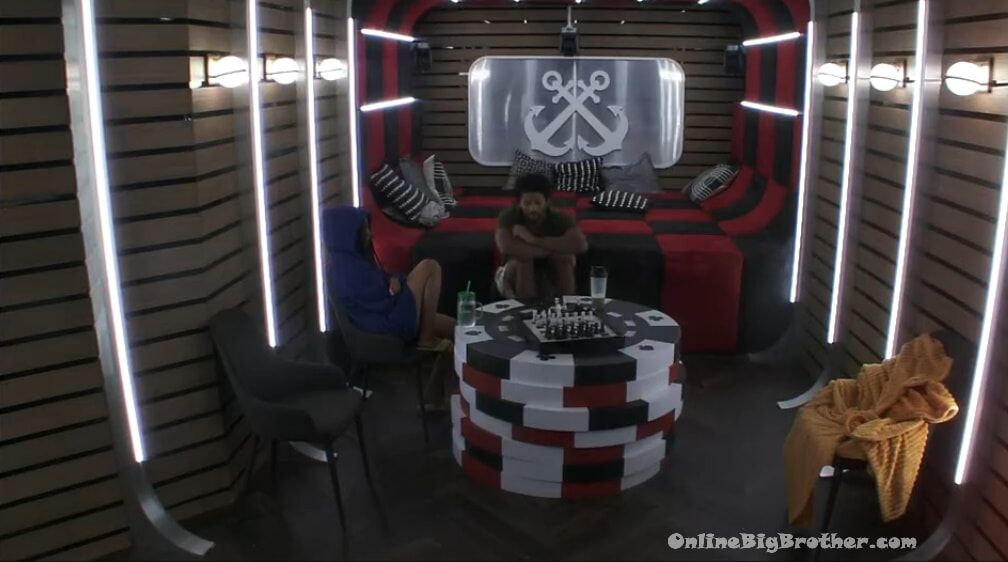 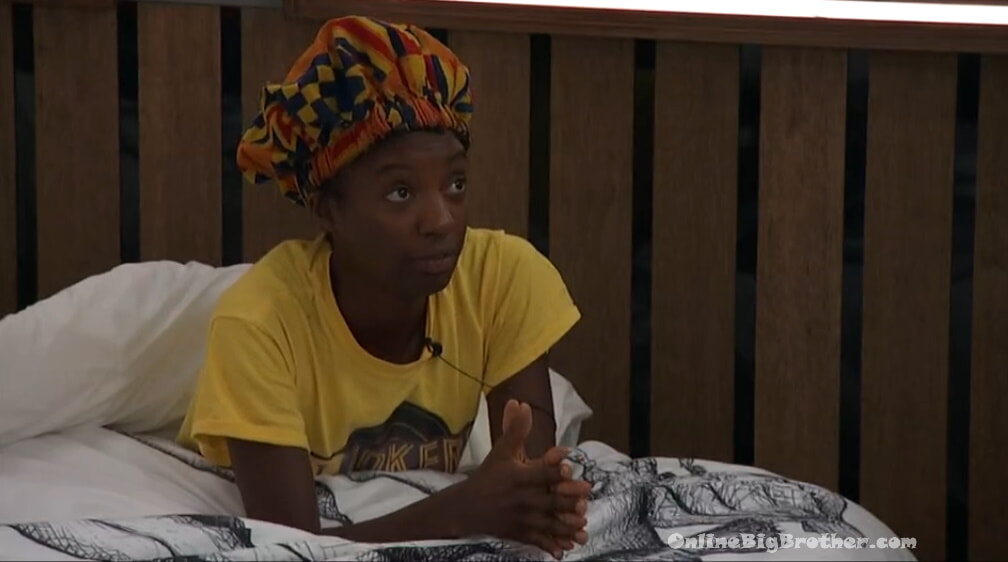 12:46 pm X and Azah
Azah – I’m thinking Ky and Alyssa if Alyssa comes off I put up tiffany.
Azah – if I’m not sure about that I was considering putting you up first with Alyssa and then switching Alyssa with Ky because I know you would say between Alyssa and BIGD
X – I’m not as convinced. Tiffany thinks I have reason to come after her and that paranoia will vote me out over Ky
Azah – I’m not counting their votes. Alyssa.. BIGD for KY I break it you stay.
Azah – I am always going to respect you opinion and how you feel
X – put up Ky and Tiffany and we can decide which one.
X – I know that is how BIGD feels he would rather choose between them two. I don’t want to sit on the block during eviction time AGAIN. I’ll let you do whatever you feel is best”
Azah – ok
X – I’m playing for the veto regardless if I’m on the block or not. 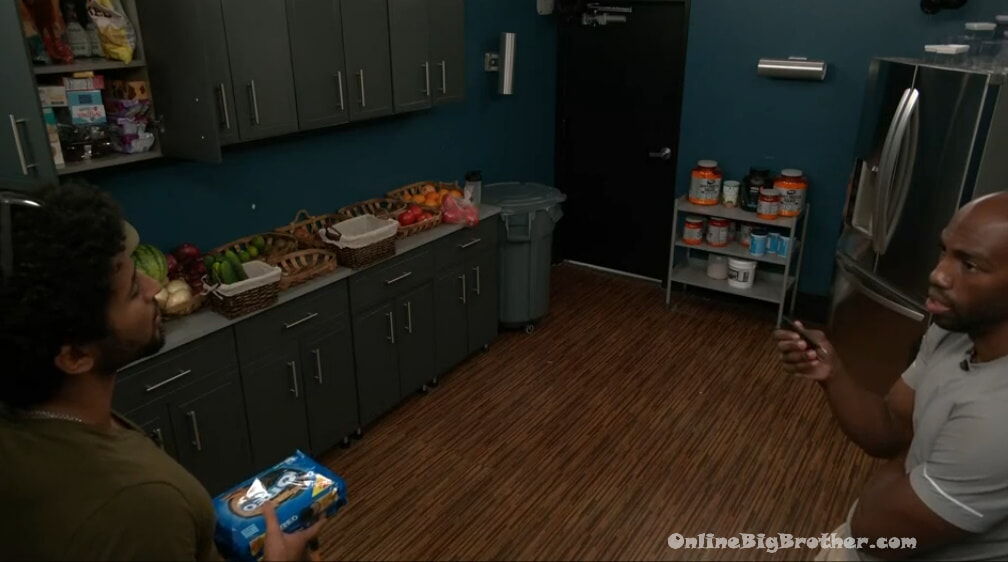 1:02 pm Ky and X
Talking about who Alyssa would put up if she won the HOH. X says he told her Tiffany and Hannah if she wants Tiffany out then Hannah will be a vote for Tiffany.
Ky – maybe she’s looking at hannah as her number 2
Ky thinks he’ll go up and wants to make sure he has the votes against Tiff.
X – if Tiff comes down it’ll probably be Azah or Hannah
Ky – don’t you think Azah or BIGD
X – Azah and Hannah
Ky – do you have a preference for 6 or 5 (HOH)
X – I’m going for 6
Ky – I’m also going for 6 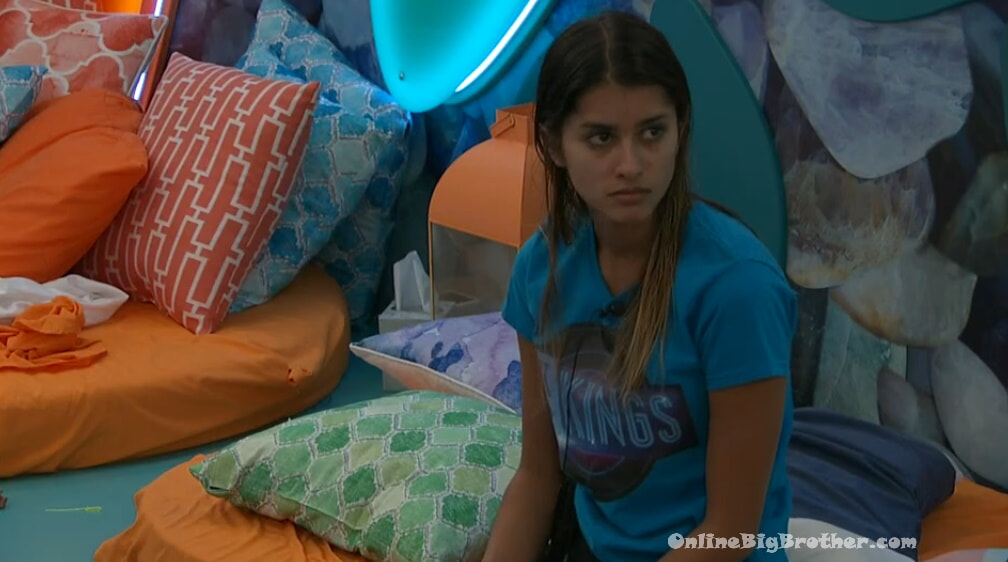 1:10 pm X and Alyssa
Alyssa – if one of them win veto. If Tiff and Ky are on the block and one of them wins Veto I don’t feel comfortable with Hannah next to Ky
X – I agree
Alyssa – BIGD next to ky
X – people have already tried to flip the vote on BIGD before
Alyssa – you, Hannah, and me will vote the same. If Ky wins Veto Hannah next to Tiff. Tiff goes home because BIOGD wants to take her out. If it’s ky on teh block I don’t trust Hannah up. BIGD won’t vote out Ky he won’t even put him on the block.
X – ok
Alyssa – Tiff, and Ky. If Ky comes down Hannah if Tiff comes down BIGD 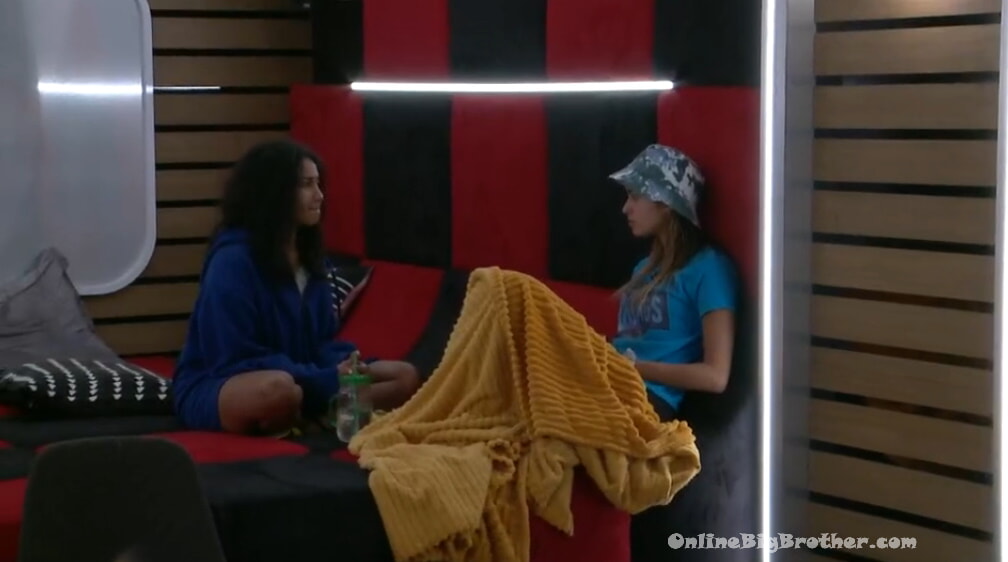 1:20 pm Alyssa and Hannah
Alyssa says she doesn’t want to put Hannah next to Ky.
Alyssa – X is onboard
Alyssa – I know you have the votes next to Tiff I don’t know what the votes are next to KY.. Me, X and BIGD would vote out Tiff over you.
They talk about BIGD and Azah going on the block. Alyssa sees the “victoria thing” She would send BIGD home. They agree they can trust Azah more.
Alyssa says Hannah os good with Azah she’ll likely go after Kyland. 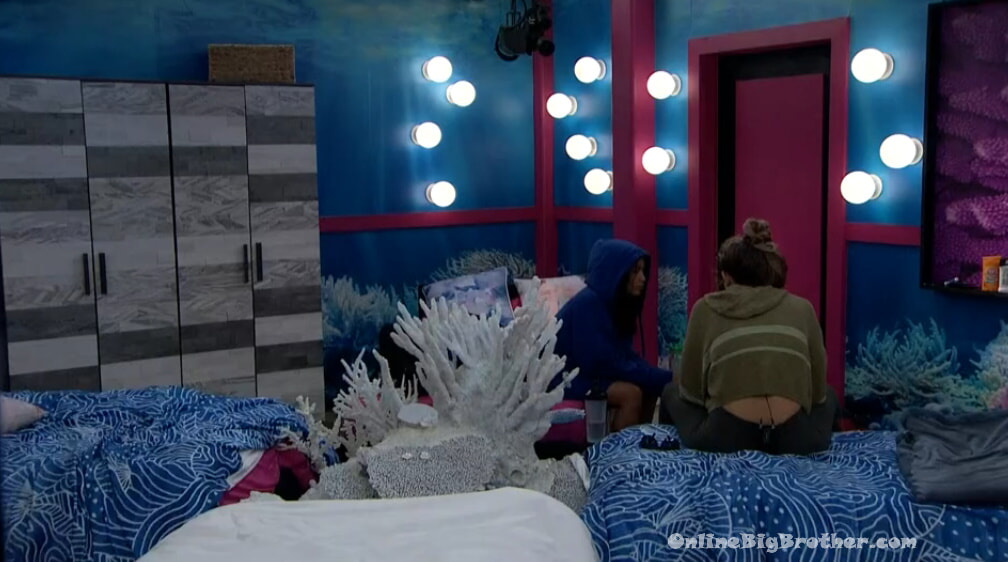 2:16 pm Claire, BIGD and Azah
Claire says if anyone sits next to X in the end they will win. Claire adds that Alyssa and X can just keep winning competitions, “He wins it no matter what”
BIGD – ok ok I respect that.
BIGD – I feel like you have Azah, I feel like you have Hannah and I feel like you have Kyland. I am the only one that doesn’t know.
BIGD says he’s nervous about voting X out because then Alyssa will come after him because he also voted Christian.
Claire offers to get into a fight with Alyssa to make sure Alyssa is targeting her.
BIGD laughs tells her not to do that.

I really liked X and even wanted him to win the $750K, until he began to show us who he really is. I hate how he treats/uses Azah, manipulating her feelings for him. And now as soon as Christian is gone, X ropes in Alyssa. Some men are just jerks. I’m rooting for Tiff for the win, but I’m sure it’s going to be an uphill battle after she refused to lose the HOH. Overall, I’m really enjoying this season, and honestly, I really do like everyone. That alone makes this a great season. So many great choices. I was planning to vote DX for AFP, but after Claire’s mature and emotional reaction to Tiff’s betrayal, and the reason why, I think I’m going to vote for her for AFP.

I feel the same way about X. Early on, I liked his steady demeanor. But each time he didn’t get his way, he revealed a little bit more of himself and it wasn’t good. I’d rather Alyssa stay over X in DE. She’s putting in a lot more effort and I’ll give her credit for the veto win. X said to DF that the Cookout made it to F7 and that’s good enough (intending to cut Tiffany). I’d love to see X’s own words bite him in his arrogant @ss tonight. It’s highly unlikely, since he’s Grod’s favorite, but it would be poetic justice.

As for Claire, I know that she hasn’t done much in the game other than follow Tiff’s marching orders, but I agree with you that she showed an incredible amount of maturity this week. For that reason alone, I’ll withhold my criticism of her gameplay.

LOL — I was just crafting a post on how X is positioned so well in the game out of circumstance (on Kings, Co & Royal Flush) & have trouble finding anything he’s done strategically in the game or via influence while Ally is at least making moves & trying to play.

X game is to TELL people what to do — & low & behold it’s Thursday & his day has been spent TELLING Azah she needs to keep him off the block & put up Tiff — ditto for Ally (re: put Tiff up).

I don’t know how much of this is bullsh*t but Azah had said she couldn’t put Tiff up on her HOH but there she is telling X she would put her up if Ally came down — (maybe also if Ky comes down). That’s super concerning b/c in either scenario I think Tiff leaves b/c X will pull Ky/Big D in a room & say vote out Tiff & we keep Ally. Not sure Ky would do it but it’s scary nonetheless.

I’m so nervous for this DE b/c I really want to see Tiff stay in this game & I’m super frustrated that X’s week of trashing Tiff hasn’t been called out by ANYONE or that the Tiff bash bros have yet to acknowledge Tiffany put the CO’s interest ahead of her own while they plot to break it up. When X is saying “she’s basically saying f*ck the culture” if she doesn’t put up Claire but meanwhile is aiming to fracture the CO for his own interests in the very next comp. Just OWN it assh*le, you’re not about the CO & never truly have been & this entire week was about you trying to trash Tiff’s game. He’s acted like a spoiled child – as if everyone came to BB to play for X to win.

I do think Hannah is hedging her bets hoping Ally doesn’t win HOH & if she does will try to get her to switch nominations & I’d expect Tiff to make a deal (& ask Hannah to come into the room to verify information).

I imagine the convo would include whether X pushed for this to happen & if she confirms Tiff can tell Ally she has a F3 with X & the reason her #1 Claire was put OTB was b/c that’s what X wanted her to do & that HE KNEW before the initial nominations Claire would go up if Ally came down. And that was why she tried to get Ally to use the POV on X to protect him but knew he’d have the votes to stay.

She can say since she blew up her game to prove her loyalty she no longer owes him any & that she’ll demonstrate the same loyalty to Ally/Han to F3 but they need to take out one of the men to lesson their powerhold in the house. Hopefully she would agree but since she prefers to work with men who knows. I mean Tiff was up in that HOHR thinking by herself most of the past few days so it wouldn’t surprise me if she has something at the ready.

Putting out into the universe a Hannah F7 HOH win nominating Ally/X — then Ally winning POV & Big D going up with Azah/Tiff voting out X & Hannah breaking the tie to send Xavier to jury (I’m trying to manifest it — especially after this last week). With X gone Ky would need to realign with Tiff b/c he couldn’t rely on Big D or Ally to work with him so yeah that’s my ideal scenario. HANNAH for HOH!

Your analysis is insightful and spot on, as usual. X’s holier-than-thou righteous indignation at Tiff all week has been ugly to watch. If everyone was supposed to throw the HOH to Azah, then Azah should have hung on a little longer. What were they supposed to do? Drop and fall to the ground as soon as Julie said, “Go!”?!

At least Claire painted a nice target on X’s back with her speech. Now, on to HOH…

But all that juicy meet and greet money. ;)

True. Desperation at its finest. What’s more sad is the fact that, she doesn’t and/ or refuses to read his body language towards her. He’s after Alyssa than her.

AdaezeSpider
Reply to  Hopeful for a Good Season

Hope X leaves in the first eviction and Big D follows him in the second!

When all the dust settles, the season is over……Claire will go home with a lot of us clearly ranking her as one classy lady.

not sure about anyone else but this is not the most exciting BBshow~!

Question for y’all: is Big D likable on the feeds? Because on TV I find him really annoying. He comes off as this lazy, spoiled brat, that thinks he’s in control and then complains about his shortcomings. I heard he threatened to quit once.

He has some funny moments but for the most part, he’s a lazy spoiled brat.

Next is Alyssa not the right poc.