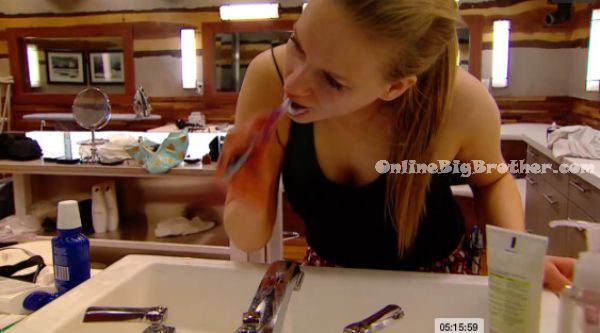 Jon says f**K me! Heather says what was the point of that! Jon says that was so exhausting! Adel says I’m not even washing my face I’m so tired. Jon hobbles down the stairs in his underwear. He kicks the have not room door open to peek inside and then looks in the kitchen and the pantry. Adel asks Jon if he wants to smash some dogs? Jon asks are you serious!? No I’m going to bed! I’ll have some for breakfast though. Jon goes to the kitchen and back to the bathroom and says it says it 5:30am eh!? Neda says she feels so sick. JOn says me too! Adel says I am just going to sleep Jon says I am just sleeping through it if they try and wake us up. I don’t f**king care. Adel says what did they do though? Jon says I don’t know. Adel says nothings different! Adel says they’re not even dimming the lights yet! Jon, Adel and Sabrina climb into bed. In the bathroom Neda and Heather are getting ready for bed. Heather sighs and says goodness.. 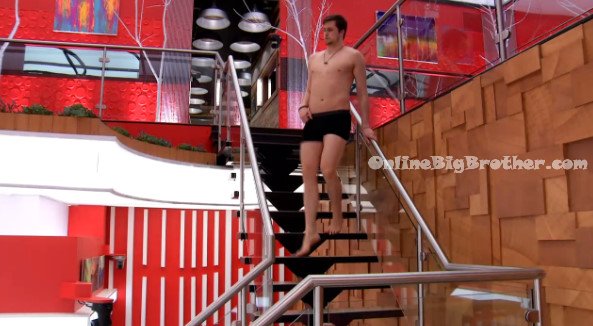 5am All the house guests are now in bed .. with no mention of who won the VETO.. We will have to wait until they wake up tomorrow to find out who won it. Jon also didn’t sleep in the HOH bed .. he just climbed into his regular bed in the main bedroom.

9:55am Big Brother is let the house guests sleep in this morning.. the lights being to turn on now.. 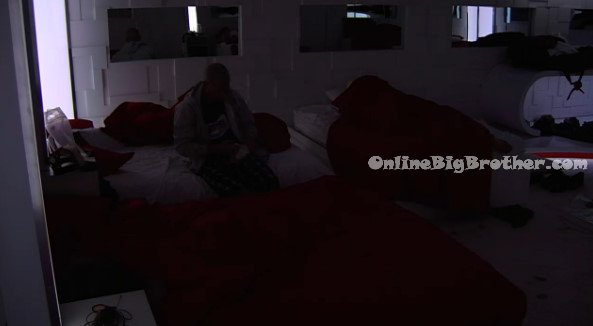 HELP keep the spoilers coming.. Show your support by making a donation. ANY amount is greatly appreciated! Simon and I work 24/7 all season long to keep you updated on everything that happens inside the Big Brother house. Your donations go directly to paying the fees required to run this site.

Why all the hate on adel? Its obviously an act. You heard what he said in the diary room. Its all game…And it looks like its working. If he makes it to final 3 with jon and neda…neda will ditch jon and take him or jon will ditch neda and take him

I don’t like the look of Heather’s body language. I think Jon or Neda won it.

Although she could just be pissed off. If everyone fought hard to keep her from winning she would realize that she was never a pawn to begin with.

Given everyone’s lack of conversation and reaction I have a feeling there might have been technical difficulties and there wasn’t a winner determined tonight/this morning. That’s my guess.

And Neda saying, oh my god, this isn’t good which could mean Sabs starting spouting info about Jon and Neda to Adel/Heather (that’s my guess).

Given Jon said he was just going to keep sleeping it leads me to believe they are all exhausted and no one was determined a winner OR they had to stop comp b/c there were still people up competing who refused to give in. It obviously was endurance so maybe they were ALL still in it to win it and so they had to call it. Just a guess b/c it makes no sense that Sabs wouldn’t have been in someone’s face had she won. Neda would’ve been happy if Heather won b/c she would prefer Adel leave. SO… most logical answer is the POV winner has still to be determined.

sounds good to me…

i dont recall an endutance comp for pov? all the endurance comp i remember are for hoh….. i know running and looking for something is a veto comp stapleq q and a are also normal for veto comp….

You may be right because when Adel said, nothing’s changed, he was gaining Joneda the assurance that he wasn’t going to use the veto. Howver, if he did win, he should use it by taking Heather off. Then Jon would have no choice, but to put out up Neda. Then Heather and Adel votes her out.This is Jon’s chance to get rid of her and go f2 with Adel, which he has wanted to do. Neda goes home.it would be a power move.

Let’s be real unless it’s who can cry, eat and pick their nose the most then Sabrina ain’t winning anythingb

she could win, if it was an ice-cream eating contest

All kind of looks like an act to me. Maybe production told them not to say anything. Especially how they all came in together saying the same thing, that they were exhausted and went straight to bed.

Let’s go Adel 2 weeks remain! And the prize is all yours !
#TeamAdel

Should Be Calleg BB After Dull omg the show is soooo boaringgg WAKE UP BB i cleaned my hole house while it was on & cleaning was more emtertainingg!!!

Well I like Dawg’s answer and the other person who suggested no winner on a technical issue or folks refusing to quit. What about a little of both! :P They got locked out in the backyard a long time….. while production tried to fix a technical/safety problem and they couldn’t sleep, eat ect. Everyone wins……. I mean loses.

Those that mention no one had any joy and I actually waited up all night for feeds to return and I think those folks are right. Body language and what wasn’t said seemed to me that what ever happened didn’t resolve anything. I doubt they’ll be up before 1 or 2 o’clock at the earliest.

Personally I think production dropped the ball starting this POV so late especially if it turns out to be endurance. They were up late the night before as well. It looked like all 6 hamsters could no longer run the wheel! :( :(

Sabrina won, It’s written all over her face. I’ve never seen her look so happy after a POV comp. “Ever”

If Sabby won it could explain some of the time on the feeds after they came back. Wouldn’t a Heather Neda conversation naturally have Adel and him going up. What of the F4 deal and Heathers F3. They could have been just plain tired. Sabs smile could be a endurance comp disaster and she gets a do over today as a possibility. Guessing the HGs won’t be up for hours. booooooooooooooooooooo

Who”s best at counting? Most probably it was a horror themed counting game in the middle of the night. I can’t imagine Heather or Adel winning it. Almost certainly a Neda or Jon win.

I would have to agree that the POV holder was not yet determined. I think they are going to find out with only seconds to spare before eviction.
On a side note I find it hilarious that Adel is always suggesting that the eat minutes before going to bed.

Pinocchio Obama
Reply to  The Truth

“Heather says what was the point of that!”

I’m still trying to figure out what this means.

Adel is asking Jon to put up Neda! Sounds like either Heather or Sabs won the POV.

Lots of speculation on the live feeds chat this morning and one comment has me thinking…..What if it is Canada’s POV this week and we get to vote on who comes off the block. It would complete our HOH reign. All that stuff last night could be to throw them off (and live feeders) until tonight’s show. They could announce tonight that Canada holds the POV power and theres no comp this week. There’s still plenty of time to vote before eviction night. I’ll be curiously watching for hints today.

It sounds like Heather won. She said “I’m so happy”. Neda said “You should be”.

Adel asked Jon to put up Neda instead of him.
This means either Sabrina Heather or Jon won the POV.
I hope Neda gets evicted this week she’s evil and not good
for Jon’s game at all.

It’s official Heather won the POV can’t contain my excitement.
Lets hope Jon has a brain and puts up Neda and she gets blindsided.