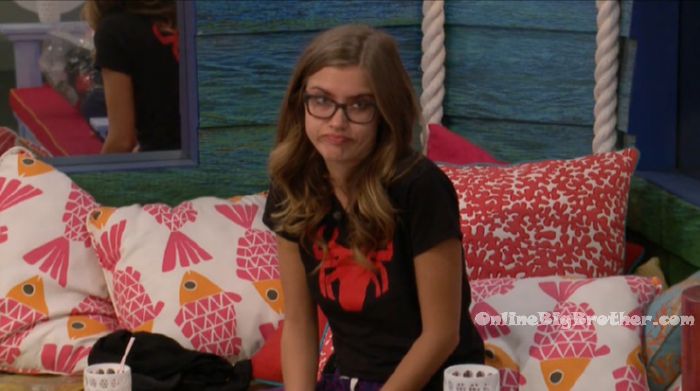 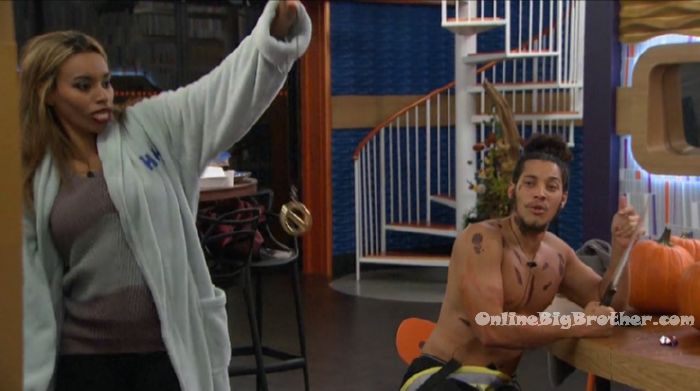 12am Danielle, Justin, Jason and Kryssie are in the kitchen hanging out. Justin is singing. They join the others in the bedroom. They’re all haging out talking about random things. 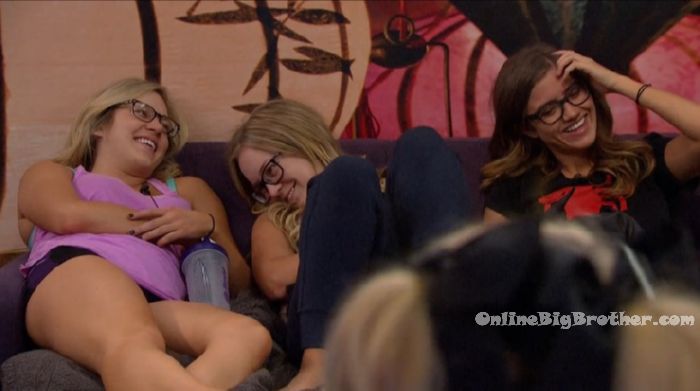 12:35am Bathroom. Alex and Shelby. Alex – I started having panics when we were in the room woth Morgan and Whitney. I didn’t know what was going to happen. It was almost to the point where I didn’t want to step in and say anything so that people think we’re lying or playing both sides. Its at the point where Danielle, you do what you’re going to do and we’ll make a decision from it. Shelby – I’m like you go talk to Danielle. I think she is going to use it on Scott or not use it at all. Alex – I was trying to talk to Whitney earlier.. and I don’t know if she is upset but she isn’t making eye contact with me and not really communicating with me. She is acting distant. Shelby – She must be freaking out …but even if she has some plan .. I have to be in the plan. She isn’t saying anything to me. Alex – she isn’t talking to us about stuff. My gut is telling me something is off. Shelby – it doesn’t matter .. take away 3 votes. Alex – I know, I’m struggling a bit because technically Scott is better for me. Shelby – he is. There’s a part of me that wants to keep the all girls alliance. Alex – my heart is telling me all girls alliance. Y’all are my favourite people. And my gut is telling me that Scott is probably better for you and Shelby because he is more invested in you and Shelby whereas Whitney is more invested in Justin. She proved that today. Shelby – my heart wants to keep Whitney, my head wants to keep Scott but its all going to depend on Danielle. She will probably use it Scott so we won’t even need to have to convince Morgan to vote out Whitney. That was just weird that Scott just assumed Morgan would chose him over Whitney. Alex – Scott just doesn’t think. Alex – keeping Scott is better because he will always be a bigger target than us. Shelby – I’ve had doubts about her (Whitney) for a while. Shelby – Scott isn’t trustworthy but after this he will have to have more loyalty to me after I use the care package to save him. Shelby – I don’t want to be the one to tell her (Whitney. That she is going home.)

12:55am – 1:10am Scott is talking to the cameras in the lounge room. God America, we have to win HOH .. we have to win HOH so badly. Scott heads outside. I’m pretty sure Danielle is going to take me off the block which is huge. Its an incredible move on her part to keep me and Alex safe. She says she trusts me the most out of the people on my side and honestly I am starting to think she is the person I can trust most on her side. Which is really messed up but when Alex nominates her and her showmance I successfully take out her showmance and she doesn’t come after us… like that is a huge leap of faith on her part and honestly I have to respect that. As of right now it looks like she is going to take me off the block with the veto she won today leaving the nominees to be Shelby and Whitney. I’ve been doing a lot of thinking. There are a couple of reasons to keep Whitney around namely the fact that she is still eligible to receive a care package. And b the fact that Whitney is a marginally better competitor than Shelby. The reasons to keep Shelby are that Shelby, myself and Alex have been working together since week 1. I think Shelby would actually consider a final 3 with me and Alex. They have been my best friends so for personal reasons it seems better to keep Shelby over Whitney. Not to mention if Shelby sticks around and Jason and Justin win HOH they would want to take her out before me or Alex. Justin does not like Shelby at all. If we keep Whitney and Justin wins HOH he would probably gun after me and Alex. So there is a lot more strategic logic keeping Shelby around. It would be the darkest timeline if Whitney teamed up with Justin and Kryssie for a final 3. Me and Alex would be screwed. Not that I think Whitney would do that because she is a loyalty member. There is a lot more strategic value in keeping Shelby around. Obviously I will listen to Alex and if she tells me to jump, I will ask how high. Unfortunately, it looks like Whitney is going to go home. Me and Alex are pretty in tune strategically. Scott heads back in to socialize. 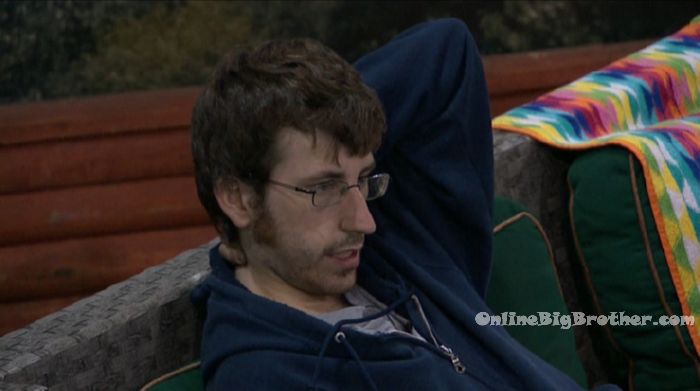 1:35am – 3:30am Everyone but Whitney, Danielle, Jason, Justin and Kryssie head to bed. They chat about random things and then get ready for bed. Danielle asks Jason if he will sleep with her tonight because she is scared. Jason laughs and says he will. Danielle the ouiji board just freaked me out. Jason – Scott was like Danielle is such a good strategist, I wish I was talking to her sooner. I was like yeah dumba$$! You’re a dumba$$. He’s such an idiot. Danielle – yeah Scott how did you not see I was a better strategist than Shane. Shane had good ideas, but I always fined tuned Shanes ideas. 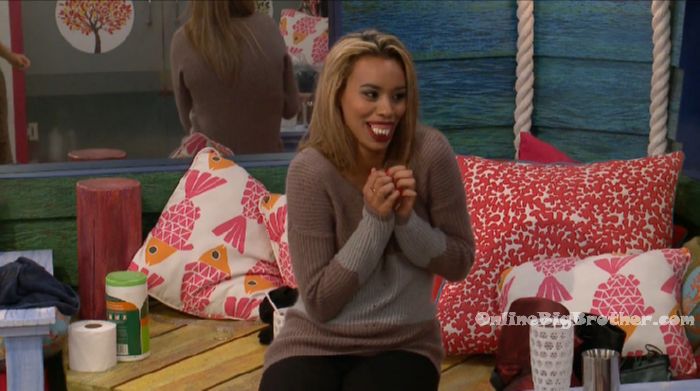 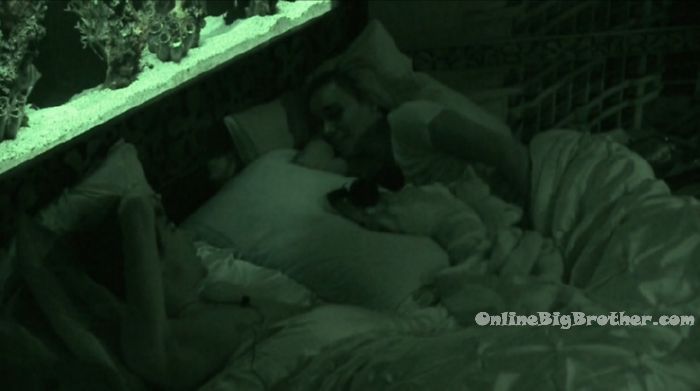 I mean, they’re talking about sacrificing her to keep (gulp) Scott. Hopefully the BS get their stuff together!! You don’t need stupid Scott!

To everyone that voted to help the scumbags and keep that disgusting slob Krissy off the block, robbing many thousands of people seeing her realize she is hated, and to the scumbags Whitney, Jason, Krissy, Dani and Justin………..

Kryssie having costume issues upstairs. You can hear her crying, calling herself a fat ass. Danielle & Jason trying to help her #bbott
LOL is she just noticing she has a wide load?

Great Week!!! tired of the plastics getting bailed out. Dan is a BEAST!

Everyone always says it and it will always be true. An all girl alliance will never work.

It’s not over yet. With girls it would take one conversation to come back together and I think these girls still have hope. If Dani doesn’t use veto on Scott there is still a good chance BS can stick together. These girls have been very smart and I would love to see them fight through this week and make it to the end. Hopefully Scott goes and then Kryssie next week.

I think you are right Danielle wants to now save Whitney. I am speechless but confused lol. This could either be a brilliant move or a disaster for her.

I hope Alex sticks with the girls.

Thought she was taking Whitney off the block

I really don’t see them sticking together. Whitney knows that she is low man on the totem pole for BS, and can’t be a good feeling. The other side has let her know this, and doing what is required to save her. She knows she is in a great position with Kryssie and Justin already, and now with the rest of them telling her they want to save her, where would your loyalties lie? She isn’t stupid and knows that her days are numbered with BS. She still has a good chance with LNC.

But where does that leave her with LNC? like yes sure this time around they want to use her to get rid of one of the BS. But that was her original alliance. Presumably, they would not turn on Whitney before getting rid of everyone else and LNC can do her dirty work for her. If she switches to LNC, then what the benefits in the long term, that she is not getting from BS?

I hope Danielle really does take Scott off. That would be awesome!! I surprised to see Jason telling her about Scott saying he thought she was a strategist and wished he would’ve started talking to her sooner. Bc we all know Danielle and she loves having her ego stroked:) By Jason telling her, this could just reinforce what she was already thinking.
I just have this gut feeling she’s gonna save Whitney though. That’s pretty risky if you think about it. If she saves Whitney and nominates Morgan. That’s 3 ppl she nominated……that are staying(if their plan worked), that could be coming after her. And if not gunning for her at the very least they can throw her up as a pawn and just say, you put me up. Ok So Whitney’s off and Morgan’s on. That means Shelby cancels Jason, Krusty, and Justin’s vote’s, leaving Alex and Whitney as the only voters this week. They think Whitney would vote out Scott and Alex would vote out Shelby or Morgan(which we know would never happen) and then they’re banking on America to vote out Scott as well. It just seems risky. If you’re Danielle. When she could get out one of the girls with a lot less blood on her hands and still have had a successful HOH!

Just curious, watching everyone cleaning up and putting awsy all the extra food–Danielle & Justin just sat at the table chit-chatting, do they ever help out around the kitchen in cleaning up?

Whitney is sealing her fate by getting closer to Justin and not talking to the others as much.

I really don’t care who goes this week. Most of the LNC want Scott gone, but Shelby or Morgan wouldn’t be that bad either. Danielle takes Scott off, and then she no longer has anyone in LNC on her side because they all know she cut a deal with Scott. By taking off Whitney and putting up Morgan, unbeknownst to Danielle, she is putting Alex in a bad position as to who she will save. Will she save Scott or Morgan?

See the LNC is back to sitting around bashing Shelby. She will never amount to anything and she is lazy………If they only knew…….

Not defending them, but they can only go by what they see in the house. She does nothing. Nothing in the house, and nothing in comps.