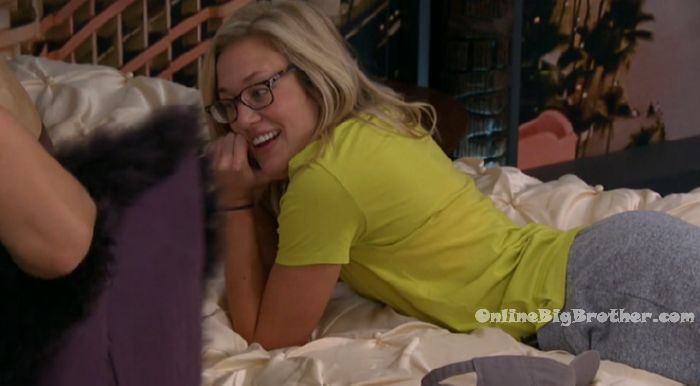 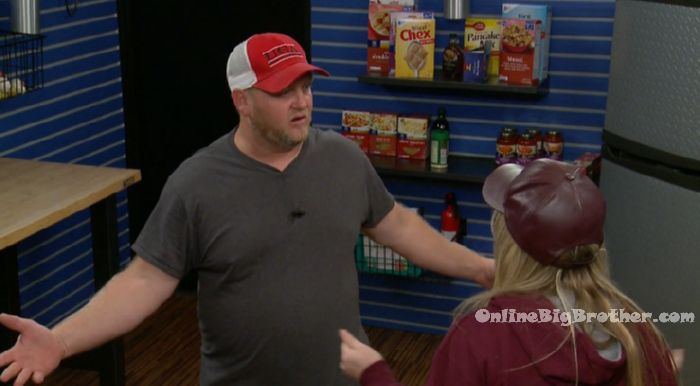 12:20am Storage room – Alex – are you mad at Shelby? Why because she didn’t get put up? Cornbread tells Alex – no, no, I was mad because I walked over to the group of people. I was talking and they just gave me this look like, ya know?! Like why are you here? Alex – rubbed you the wrong way basically? Cornbread – yeah. Alex – that’s why like .. we have our group of people but we have her (Shelby) for a vote but we don’t tell her that much information. I know y’all are that compatible. Y’all are just very opposite. Your personalities just clash. Cornbread – its not like I went out of my way for it to be like that but I need y’all to be my eye’s and ears. Alex – yeah as long as you do the same for me. Cornbread – I think she came here for a showmance to take it to the end. Alex – well yeah, she’s a very flirty. Cornbread – its just she does so good and then .. I think she’s bi-polar. Alex – this house makes everyone crazy. Cornbread – she wears her feelings on her face. Alex – she doesn’t have a good poker face. Cornbread – I don’t want everyone to think I’m always pissed off .. I was just irritated tonight. 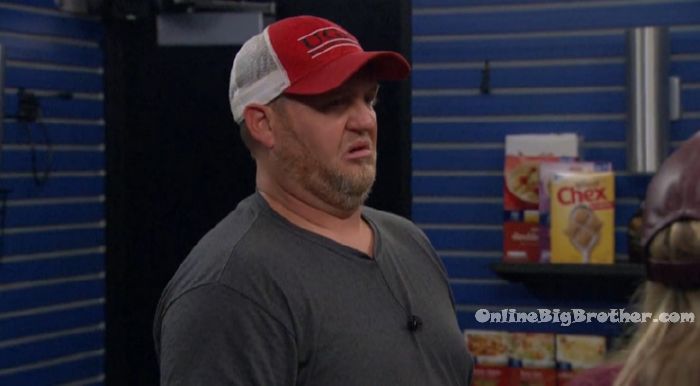 12:50am – 1:45am HOH room – Monte and Morgan are talking in bed. Monte – Shane has my back and he will have yours too if I tell him. Like if someone goes after Morgan or Whitney I’ll have your back. And the house is going to learn this and I’ll be like so what?! I’ve got Morgan, Whitney and Shanes back. Alex – Cornbread seems loyal too. Monte – he does. Monte – we can’t count out Danielle and Jason winning POV and winning HOH. He told me even if you did put me up and I somehow stayed he wouldn’t put me up because he could see working with me down the road. I was like how can I trust you. 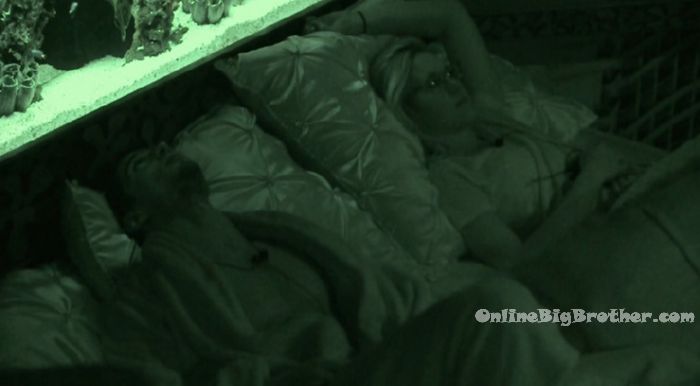 1:55am Bedroom – Justin tells Shane – I told him (Jason) that if I win the veto I’m not going to use it on you. Like we ain’t going to be cuddling and sh*t. Shane – yeah I told him the same thing. 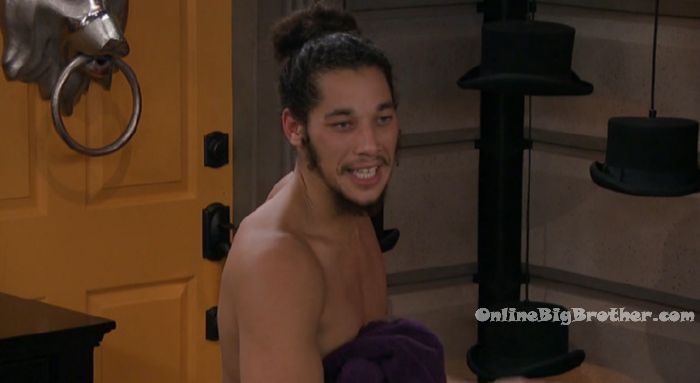 2:10am In the bedroom – Cornbread – Kryssie is having another melt down. Like the sh*t she is telling me.. She is ready to walk out. Scott – she doesn’t want to be the first to walk out. It’s almost like a mercy killing at this point. If I win HOH, I would put up Kryssie and Danielle because that takes a little head off of Monte. Monte isn’t the only person that nominated you. It is what it is. Cornbread – you’re a pretty diabolical dude. Scott – its pretty much st in stone. Cornbread – let nature take its course. 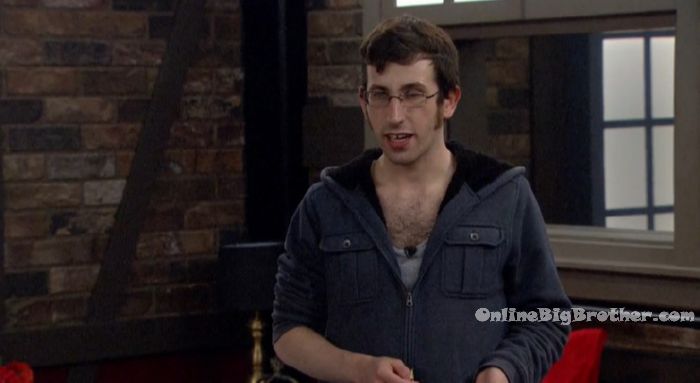 2:20am – 3:30am Jason tells Scott he’s been through all the emotions. I am just hoping for something positive like its a comp I’d be good at. I have cards left. I’ve got knowledge about stuff but why would I pull it out if I’m not going to be here. Scott – you brought so much life to the house I didn’t think you would be the first to go Justin & Kryssie join them. Jason – Jason only cares about himself and none of you c**ts! They’re going to have final 8 of boring a$$ motherfu*kers. Kryssie – I’m not giving up. Jason – the BB17 people didn’t piss me off this much and I was nominated 7 times. They all head to bed.

3:30am All the house guests are sleeping…

wtf is up with Scott and his cigarette smoking? I have been around smokers my whole life and I have never seen anyone with the smoking mannerisms of this guy. He is just plain weird. I think we may have an alien visitation in the BB house!

Yet Another Hillary Lie
Reply to  bbfan

Bud
Reply to  Yet Another Hillary Lie

lol Must be nice to not pay taxes. Scott is odd for sure.

Bud and Corn are buddies.

Is there any way to watch the recap shows if you are outside the states? I have heard that its on demand on CBS?

Dawg
Reply to  Guy From Canada

Only if you have a VPN and sign up for CBS All Access. To do that you would need to purchase an American Express prepaid credit card at Shoppers Drug Mart.

Guy from Canada……..What Dawg says works well. Google ‘Ún-block us’ sign up for the free trial to begin with, then get the American Express card. Make up a US address with CBS (nothing is mailed out) and it works. Make sure you are on US region with ”Únblock’ when you create CBS account. Go back to Çanada’ when you go on Netflix.’You don’t have to restart laptop when switching, it’s super easy. I just bought a Roku as you can even connect show to tv with it. Setting that up tonight. Ignore CBS message on geographical location as it does work.
Thanks Simon and Dawg for all your help, I will be sending a couple donations through this season.

A lot of people on feeds don’t like Whitney. I want to vote to put her otb but I’m going to vote Shane. Just to take a vote away from monte and send him the message that he’s not liked. He’s way too cocky, it’s too soon after Paulie for a really cocky attitude right now. lol.

Its weird Shelby sounds just like Liz from BB17 and has all the same weird facial ticks furrowed brow….puckered lips ect…..she’s very reminiscent of Liz…..what do you think?

Hi Dawg & Simon,
I am reading the post. Seems like they are playing hard and lots of players this time around. Is it called BB19? Monte is the tool so far and I like the sisters. It is strange not seeing them on TV. Also like CBS is saving a ton of cash playing access only. Thanks for all you do

Alex! I want to play the Bongos on those buns.

I haven’t paid a lot of attention to these guys so far. I was wondering if they are actually interesting to watch or more of the same bland personalities? Are there players in the crowd? I see the game has quite a few shifts from the televised version so the house guests have to adjust strategy to a new game environment. I noticed the age range for the girls was 21-25 with 1 outlier being 33. The guys skew a little older but again only 1 guy over 40 and everyone else under 30. I’m curious and slowly willing to see if this works.

The girls are pretty good. Like them all but one. So much better than last season. But the guys leave a lot to be desired.

I’m trying to get use to the changes. I can’t really tell if I like it until I see some of the effects of our votes etc.

The feeds themselves are a lot more entertaining. The hg HAVE to be awake from 10am to 10pm. So at least it’s not a lot of sleeping like usual. And they’ve been trying to play a lot of games, so it’s not quite as boring.

All in all I still kind of feel like this is the Wal Mart version of big brother, but I’m not locking that assessment in until I see a little bit more.

I have yet to see anything really entertaining. These are boring people! The only time I wasn’t bored was early Saturday (I think) with everyone in the hot tub talking about drug use & Justin explaining what it’s like to be a pimp, which he was while in school. Jason was bragging about all the drugs he’s tried & even mentioned common OTC drugs that will make you high. It was disgusting. I want them both gone, the sooner the better. Maybe I’m just a prude but not what I want to listen to.

I am going to LAUGH my ASS OFF If Jason gets voted off this week & is the first to go!!

And hilarity ensued as they tried to make sense of it, and convinced themselves it was because America loves him and wants him to “prove himself”.

Yes Cornholio, that is exactly it!!!

Now what would be perf is Jason wins Veto…
Go Jason go!!!!

Could you guys put a poll up of who America would nominate, please?

Yet Another Hillary Lie
Reply to  Katie Girl

i would love to see that too if possible. Thanks.

Justin and Jason are fu**ing hilarious!

Because Cornbread gave
Jason the bug taking Jason out of being HOH.

I was right!!!! Danielle is a low life! Right after Jason won veto hoe runs upstairs to Monte and starts squirming throwing shade to Jason and the midnight gymboree. Done son! Go Jason! Hope he reveals his two face “friend” and exposes the sisters (even though their good and playing the game hard).

Monte “I hope the house is scared to touch us!”

Oh, Monte, your hubris will be your down fall, just like every other alpha male to come before you.

Okay America, regardless of the replacement nom, I think we have a chance to send cornpop home!

Jason, Justin, Neely, Shelby/Khryssi (one will probably be on the block), us, and maybe Scott??? Let’s make it like a civil war reenactment…. and we know how that will end