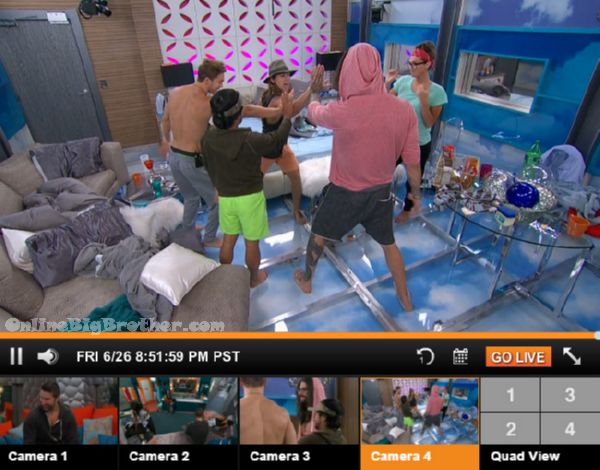 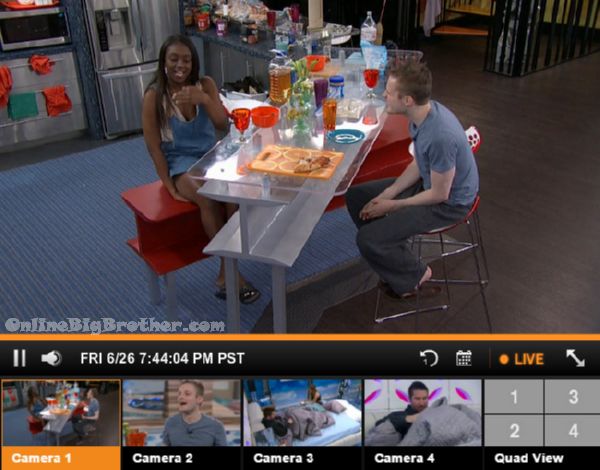 7:20pm DA is asking Johnny mac where he is with the other houseguests.
Johnny Mac is good with Jason. He reminds him if a friends back home.
DA says she’s close to Jason and knows Johnny mac doesn’t have to worry.
He’s worried about Shelli thinks if she wins HOH she’ll put him up.
DA says today Austin and Liz were telling her that they don’t trust Audrey.
The next thing she knew Liz and Austin went and told Jace that DA is the Mole and told them not to trust Audrey.
Da is saying that dan is more of a legend than Dr Will.
Johnny MAc wonders how Derrick will do in All Stars
DA – I don’t think he’ll make it to Jury
Johnny Mac – People were on to him but they never had the power.

Johnny Mac complains about how full he is.
DA points out he’s eaten 13 pieces.
John says he’s slept in a dental chair before so the have nots isn’t that bad for him. He brings up Dental school. They go in depth into dental work. 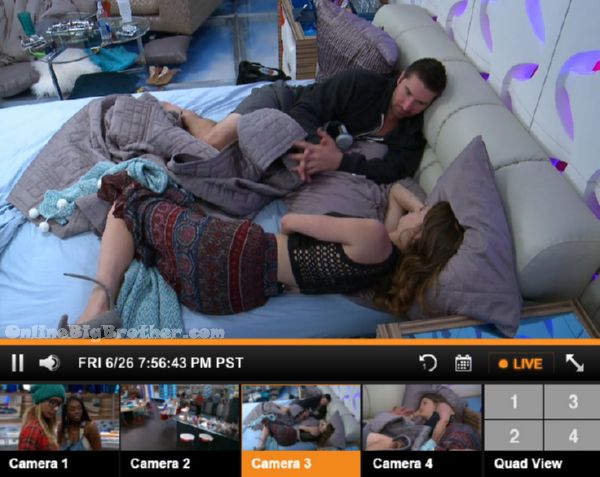 8:01pm Jeff and Becky
Having a one on one non game conversation. 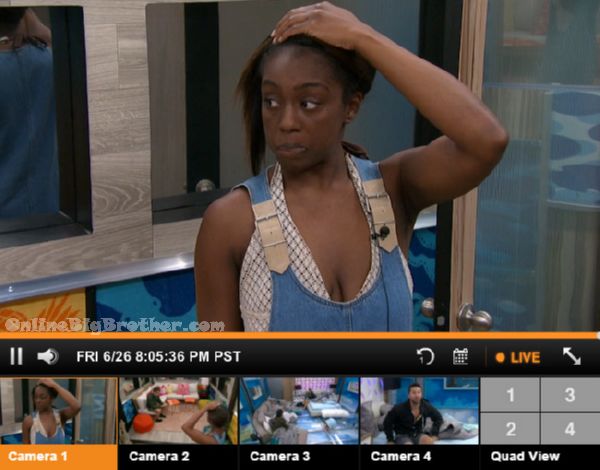 8:06pm Da and Steve
She’s asking him if he’s said anything about her today.
Steve says he’s never said anything negative ‘May I ask what you’ve heard”

8:30pm Austin and Audrey are having a conversation we can hear them but the video is of a wrong conversation.

They are talking about James not putting up Jeff. Austin says Jace is with him he willing to work with them.
Austin is pretty sure DA is not a teacher. 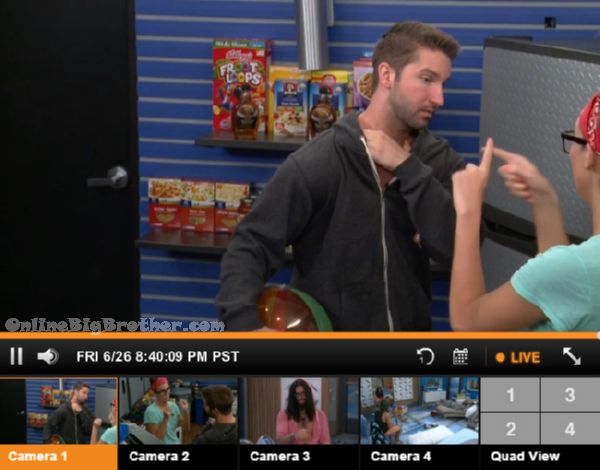 8:40pm Audrey and Jeff Storage room
Tells him AJce and Austin will try and Get out Jason then DA.
Jeff asks if they are still getting Jace out
Audrey – Ya
Jeff- you guys know I have to get rid of Austin.. he hates me.. I feel good about this alliance btu I like Clay.
Audrey – We’re not gunning for him.. I feel really close to Clay
Jeff says he can’t gun for Clay.
Audrey says next week they need to get Liz out and if that doesn’t work Austin.

8:42pm HOH Jace, Austin, James, Audrey and Clay (Aka 5 alive crew)
Austin says they are pretty much all gunning for Da. Reminds them they have a group that is trustworthy, “We trust each other 100%”
They wonder about the name for their alliance.
Austin – 5 finger
They come up with “5 alive Crew”
Jace and Austin leave. \
James – Dumbest dumb alliance ever
James – they think i’m stupid they just want to solidify something before Veto ceremony..
James says it’s the dumbest alliance ever hell no he’s in that alliance.
Audrey tells Clay there’s an alliance that includes, James, Meg, Audrey, Jackie, Jeff and Jason.
DA and Jason join them. Clay tells her he is not targeting her he’s got nothing against her.
They tell DA JAce, Austin and Liz are targeting her next week. 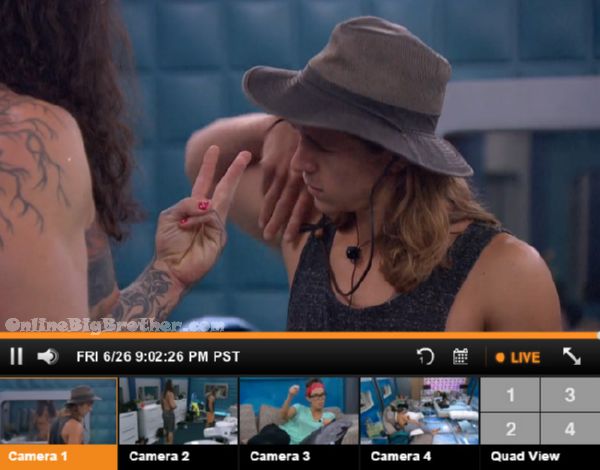 9:00pm Have nots Jace and Austin
Jace wonders if 5 alive is a realy alliance.
Austin thinks it is at the very least it will keep them safe this week. 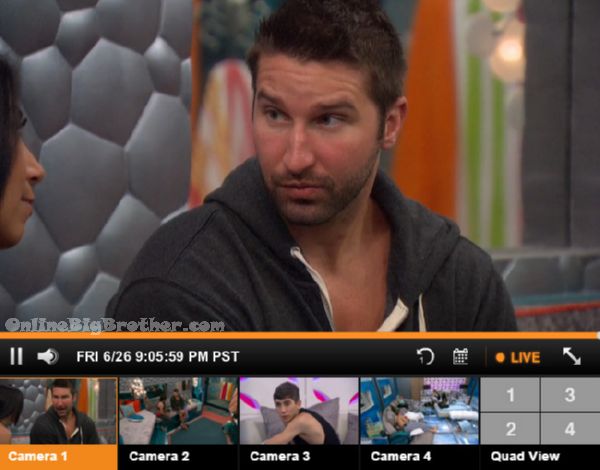 9:06pm Bathroom Jeff and Jackie
Jeff pointing out that Audrey is a really good player. he thinks he’s going to start some shit and get kicked out. Jackie noticed she’s a good talker. Jeff trust Jackie and Jeff in this game. They got Sheli and Becky on the side. Jeff is really pissed at Becky says she’s throwing his name under the bus all day. Doesn’t sound like Jeff is serious about the High rollers alliance.
Jeff wants to laugh in Austin’s face “Dude nobody is jealous of you” 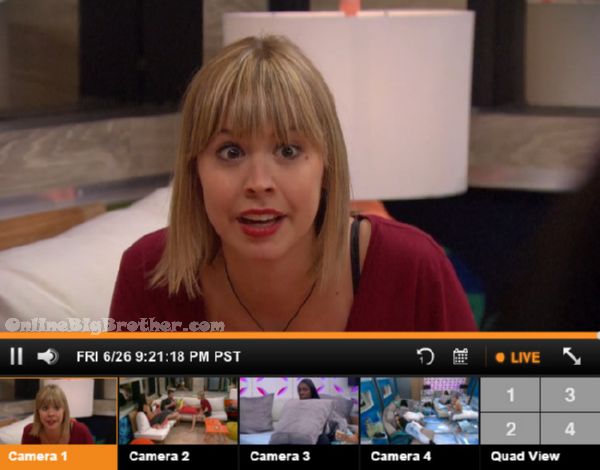 Jeff says the cat is out of the bag that she’s in an alliance with James. Mentions they called him into the HOH. “Me and Jackie are working with you all now”
Meg – I’ve been fighting for you with them this whole time.. they didn’t trust you guys” They agree Austin and Liz have to go next after Jace leaves on Thursday. They plan on using the High Rollers alliance to get them to Jury after that it’s off.
Jackie joins them. Jeff says he needs to build more trust with DA. He doesn’t care if she doesn’t trust him but they have to keep working together.
The girls tell him to “Play Nice” with DA she’s emotional.
Meg wants to keep the Clay and Shelli close. There is worry about Clay wanting to get DA out soon. They are certain if Clay wins the HOH he’s putting her up. The plan is to keep it secret from Clay that they are working together.

They laugh about Jace and Austin thinking they won that Steve won the POW they think jason is getting backdoored.
Clay joins them.

Jeff is really funny. I like him now. Jackie’s a sweetie. Meg is also growing on me. Austin’s been a disappointment.

I agree Austin has been a disappointment…yet I still like him. He seems honest and real. I hate he got caught up with Jace..ugh! I hope if they backdoor Jace and he leaves, that Austin can regroup and maybe stand a chance.

Looking at that photo of Meg crosseyed makes me dizzy, quick, somebody hit her over the head with a Louisville Slugger.

There’s no real pretty female HG this season. Shelli and Becky ‘fair to midlands” at best. Beyond that, maybe by the fifth week they might look attractive to the male HGs.

There’s no male eye candy either.The guys all look like toads except for Clay and he’s not all that either.

So Meg doesn’t want Da to go, and wants Jeff and Jackie to get closer to her? I had Meg pegged for being one of the first evicted HG, but I think she may make it to the end. She’s on nobody’s radar and is still able to talk game with multiple people. She has ties to Audrey, Clay, Jackie/Jeff, and seems to want to keep Da in as a bigger target than herself. She’s kind of like Andy socially. She talks to almost everyone, but isn’t seen as a target by anyone. I’ve become more impressed with her gameplay. She’s Floating in-between a lot of bigger threats which will take her to at least jury if not farther. I can now say her and Audrey are this seasons Floaters, but Meg is the better Floater of the two. Audrey is a aggressive Floater and Meg is a more social Floater.

Hey Simon, Dawg, or can anybody else give a breakdown of where each HG stands or at least the alliances as of now? Incredibly and ridiculously confusing.

What are you talking about? She’s made ties with multiple people and has talked alot of game without appearing on anybody’s radar.
I honestly thought she would be evicted pre jury but i see her making it much farther.

Please put James up and get him out. 1 episode of him was enough. Don’t need another Frankie in the house.

Do you mean Jason?

I’m fine with either or both going. Their accents…arghhhh..the inside of my skull hurts

i think this has potential to be a really good season! Not a huge fan of them bringing BOTB back but I am interested to see this BBTakeover and how it will influence the game each case week! I just hope that this year will be a little less predictable than last!

Besides Clay, there are no really “model type” people here. Don’t get me wrong, i’d much rather average looking people ( like me lol) play that have great games than the Brits and Ambers of Bb16. It was just kinda unusual, since Grodner seems to always recruit the model types.

Audrey is the biggest snake in the game. She’s lucky that she’s around a bunch of people that have no idea how to recognize when someone is always demanding info but never offering it. She’s spent the day peppering HG’s with questions about their honesty and loyalty, demanding answers, and deflecting any questions put to her. She’s the puppet master so far in week one, but I don’t see her being threatened, because none of them want to be the one to evict the first transgender HG.

Flashback to 3:10pm today to watch her work her magic. After three minutes of breaking down Jeff and he leaves to get Clay, she’s alone and does her happy dance mugging to the camera knowing that she is manipulating the shit out of them. And this convo then brought on her meetings with Austin, Jace and Liz, where she got them to admit everything they’re thinking….and now she’s using that info to get everyone to hate them..

This is week one? These kids are playing it hard, and a few are playing well. How many pseudo and real alliances are there now? I hope Audrey doesn’t burn herself out. She needs to slow her roll. Vanessa is disappointing so far too. I’m liking James and Da’vonne at the moment.

I think Austin is going to be in a really good spot if Jace and Liz go quickly. Jeff already seems to be warming up to him again (actions-not what he’s saying) and I think people are going to want to keep him in as a “target.”

When there are clearly defined groups they will keep deciding to use him as a number they can get out later…and he can cruise through the show making big moves with little fear of retaliation because he doesn’t really belong to anyone.

He stumbled into a good spot. I hope he recognizes it and doesn’t go crazy as they evict his alliance.

So far Johnny mac is impressing me, doing a fine job coasting the middle and pretending like he doesn’t know anything

How does Austin know DAIs not a teacher? He keeps voicing his suspicion that she is involved with poker, did she tell him?