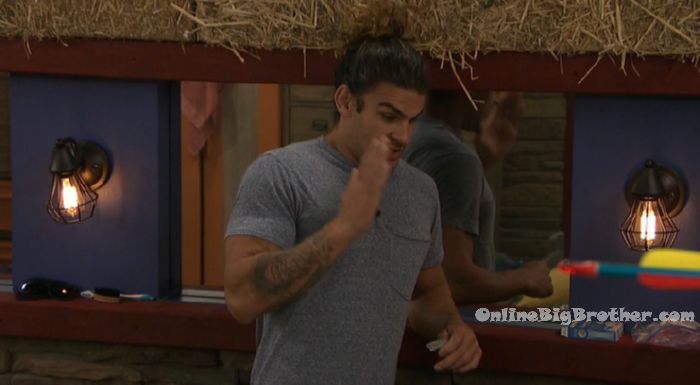 8pm HOH room. Christie and Cliff conversation continued..
Christie – I would way sooner go to the end with someone like you and Tommy than a couple couples that think they’re the elite because that’s what they think they are. Cliff – we all do some sneaky things because you just have to… but I have a minimal level of things I won’t do. And a lot of that has to do with being mean to people just for the sake of being mean. Christie – that’s why I am so pissed at Michie. Cliff – so much of this is just so unnecessary and that irritates me. If I don’t make if far…life goes on for me ..I’ve got plenty of things at home for me.
You or Tommy. I don’t want THEM to win. Christie – I don’t either honestly. Part of me thinks it would be funny for them to go to jury and have to sit around to vote for one of you to win. 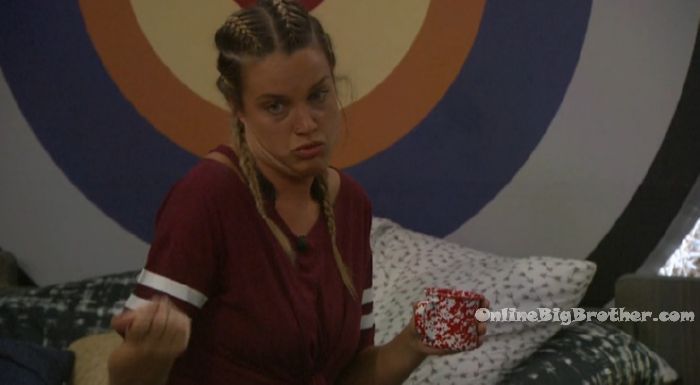 6:06pm Storage room. Christie and Nicole. Christie – everyone has their eye’s on me and they’re putting pressure on me. I’m so scared. Nicole – I didn’t do any kind of math. And I have just been told by both sides that I am the deciding vote. So now I am flipping my sh*t! Christie – that you’re the deciding vote? Nicole – where is Christie at? Where is your head at? Christie – so basically how I feel is that I won this power and it should be used for me. The thought of even using it at all is terrifying. Either A) I use it.. and the five people I voted with last week ..are happy and safe .. and the six stay here and we can move forward in this. 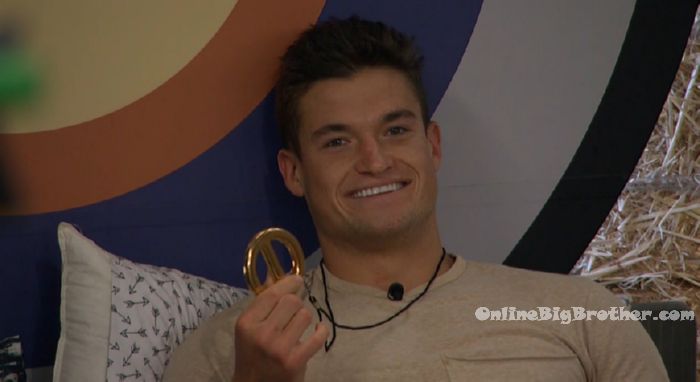 The house guests are all in the living room talking about the power of veto competition. Jackson – every second counts as 30 seconds. If you take all three buttons off every second is 1 minute. And you have to take all three off because you have to turn and push this button that’s in the water. You have to swim through the water. So every second is a full minute. Jackson explains how he completed the comp in the fastest time. I probably did everything I had to do in a minute real time. I’m playing chess not checkers!!! Lets GO!! Old boy did what I had to do!! 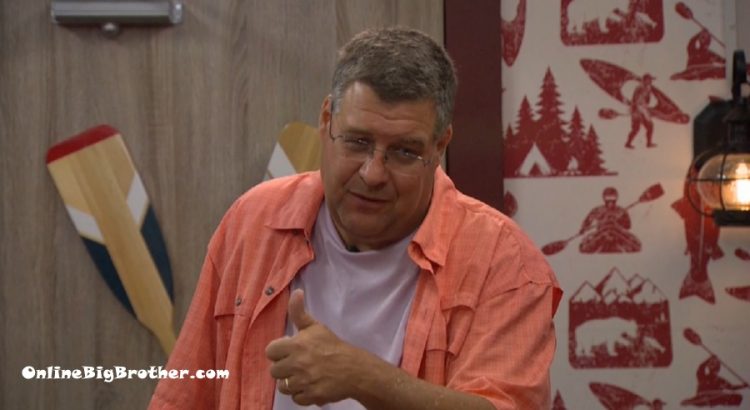 10:25 am Cliff and Kat
Cliff – if this doesn’t work we’re all gone
CLiff telling her that the outsiders are her, him, Nicole, Jess and Sam
Cliff noticed Jessica and Bella arguing over some frivolous things that happened last week and who had the power, “who cares no one knew who had the power”
Kat doesn’t think Nicole will vote Jack out
Cliff – you don’t think so
Kat – not this week
Cliff – we’ll see if so that’ll make it real tough. there’s no other next week if she doesn’t do it this week he’s in this house for good then that power six
Kat – I know