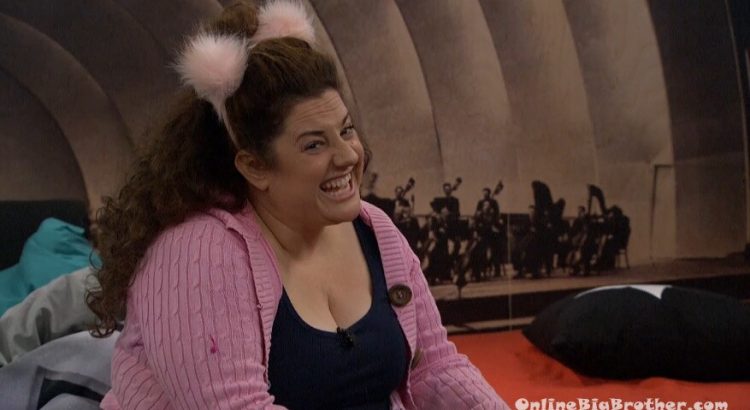 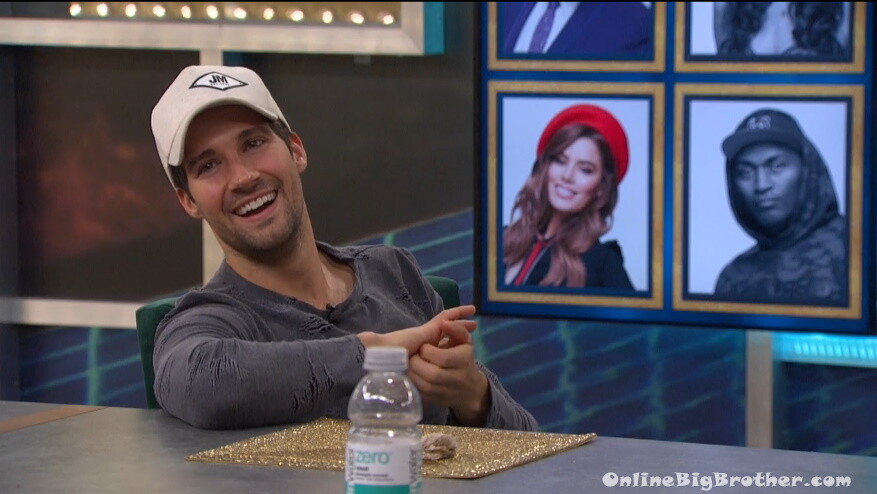 12:42pm James and Mark
Mark saying he’s aged 50 years since being in the house
James was going to tell Ari she wasn’t the target but felt it best to be coming from Mark
James – just say it at the table
Mark – she put me up too

James – I think Omarossa is so happy she’s going to be so happy
James – we gotta watch out for her next
Mark – they’re both dangerous.. (brandi and Omarossa)
James – depends on the competition..
Mark – Brandi is a way bigger threat in a competition
James agrees
James says if it’s anything where you are moving about Omarossa won’t do well
James- i think Omarosa might be quicker with true false stuff..
James – we gotta get them both out anyways.. and you have no blood on your hands by getting out Brandi
Mark – I don’t care about that.. it’s too late now..
James – look, people outside the house may get more excited if you get rid of Omarosa but we’re playing a game inside the house..
Jame s- our fans will be so happy you got rid of BRandi.. that’s a big win
Mark – stay the course 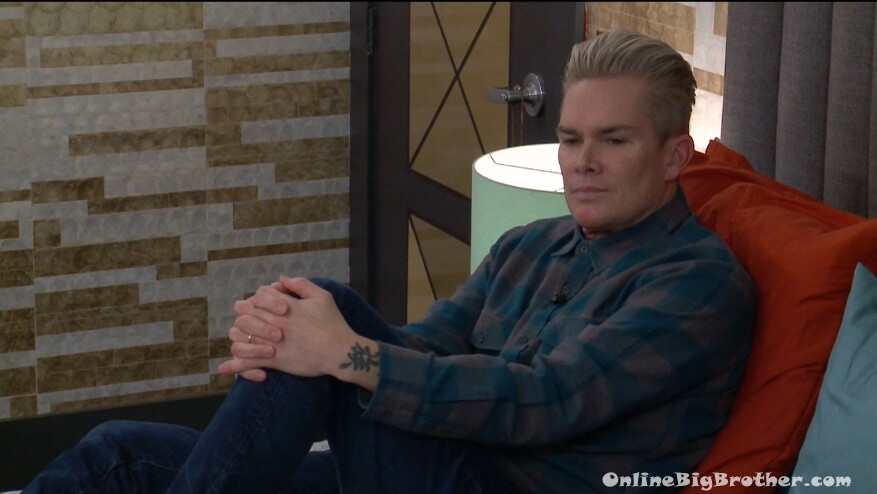 Ross – this game is getting tougher
Mark – I don’t think anybody will be surprised by my nominations.. I’ve briefly talked to Ari and Brandi..
Mark – people understand it’s part of the game.
Ross – Ari asked me and I just played dumb
Mark – I almost told them.. I just want to keep the peace.. \
Mark says Brandi won’t be surprised but Ari might be. Adds that Ari nominated him though he was just a pawn.
Mark – we’re at the end of the game here.. I gotta make some moves and not worry about feelings

Mark says he’s “Totally committed” to their final 4 with James and Marissa
Mark – I want us to be in the final 4
Ross – YES
Ross – I want MArissa to win that next hoh or James..
Ross – saving James for the last one.. crunch time.. any order. Me, MArissa, James..

Mark – Brandi is going to go for me no matter what and I know it
Ross – mmmhmmm
Mark – me or James
Mark – if she had the power she would put me and James up but I have the power and I’ll put her and Ari up.. it’s very simple
Ross – if I was sitting where you are sitting it’s exactly what I would be doing

Mark says Omarossa is stuck by herself and Brandi/Ari are a team so it makes sense to split them up first. especially now that they have their numbers

Ross – say Brandi or Ari left.. and Omarossa got HOH next and put me up.. I think you guys can keep me.. you just need 2 votes
Mark – I don’t think we could lose. I really think you’re good ross
Mark – in my experience in the Big BRother house the first plan is the best plan and don’t deviate 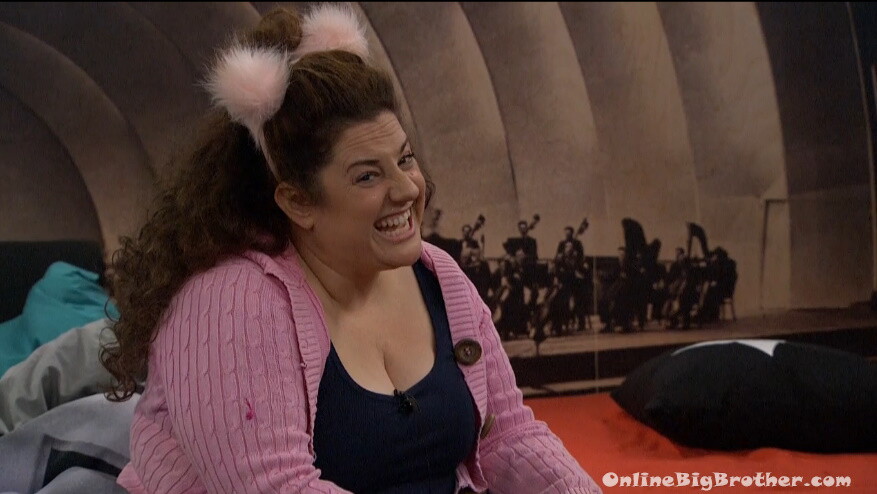 3:33pm Marissa and Ross
Marissa says she wants Omarossa gone next.
Marissa mentions Brandi saying “everyone’s got to do things for their own game”

Ross says if it comes between Ari and Brandi he’ll vote to Keep Brandi.
Ross – Ari is too big of a threat in this game
Marissa – I would keep Ari

Marissa says Ari told her that Brandi is trying to make deals with Omarossa.
Marissa – she’s just trying to save herself and I respect that good game play..
Marissa – my dream would be you me and Ari that would just be fun..
Marissa – everything I’ve dine is for our four, it’s a numbers game.. if we can’t do it for the four

Ross mentions Omrarossa
Marissa – I don’t want her to win.. I don’t think it would be good

Marissa tells him the girls don’t care about the girls they just say they do.
Marissa says she’s hanging onto Ross’ Games she doesn’t think she can win in the end.
Marissa – I’m not hanging on.. i’m following your lead.. I helped you join this team.. it saved you but it’s a numbers game

Ross is upset about a final 2 he had with Brandi and she’s slated as a target.
Marissa – I final two doesn’t mean you have to make sure it stays in place every second
Marissa goes on to explain to Ross not to be upset if Brandi goes. 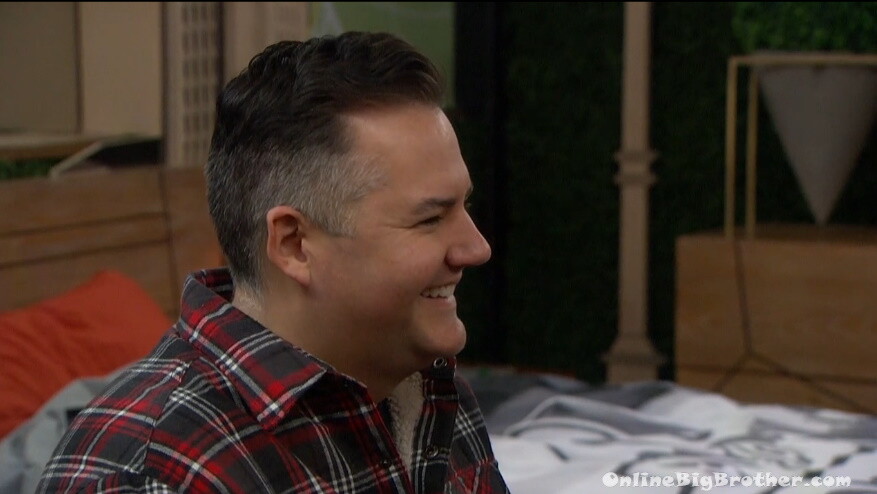 Marissa – you know why you and I are here
Ross – to make it fun
MArissa nods – lets go do something
Marissa – the reason you and me are here?
Ross – is fun
MArissa – the reason why both of us are here was in case one of us went home (ZOMG)
Ross – yeah
MArissa – I thought of that early.. they stacked the deck with energy they made sure there was good energy in the house and that’s you and me
Ross agrees
Marissa – they were scared one of us would go fast.. that’s why we’re here
Ross – I think so too
(ZOMG) 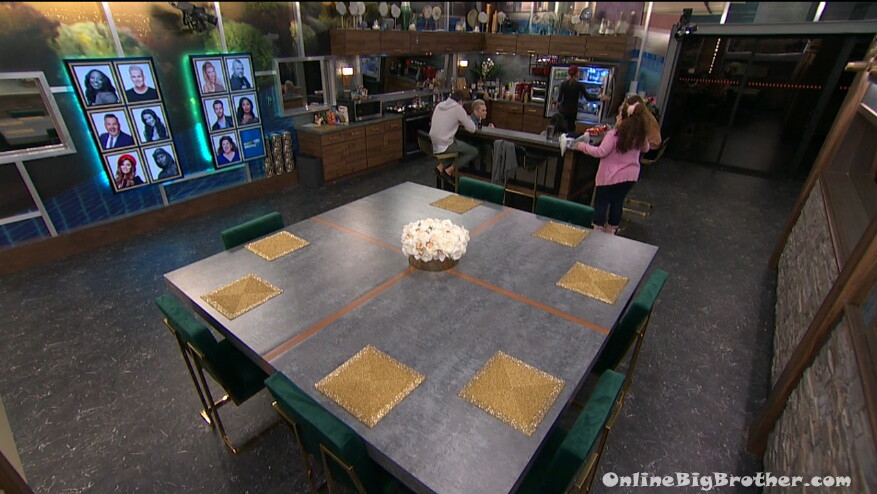 6:00pm Brandi and Ari are nominated for eviction 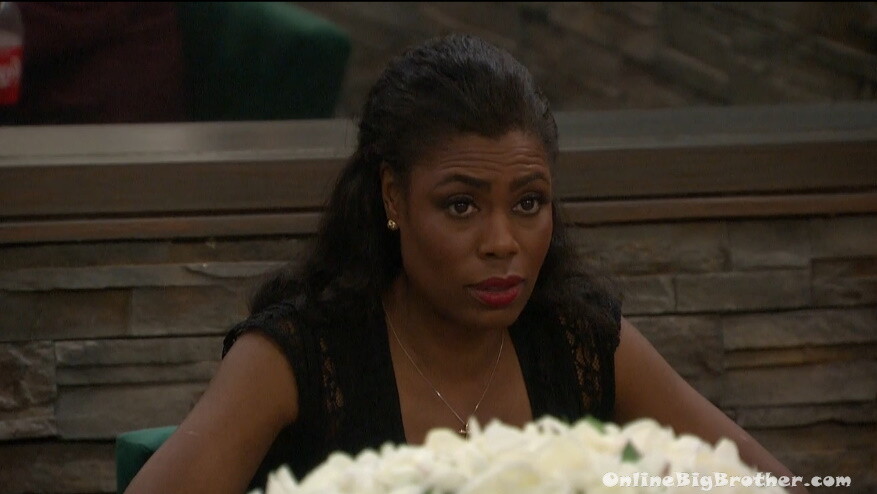 8:04pm around the dinner table talking politics.
They mention they had no idea Omarossa was in the white house.
Mark – I find it strange that it was never mentioned you were in a White House presidency before.
Omarossa – It’s the clearest evidence that journalism and true journalists have faded away.. just to do basic fake checking.. without going to wiki and cutting/pasting and repeating the same stuff over and over.
Omarossa – I literally seen stories go from a blog to a legitimate newspaper
Mark – yeah
Omarossa – without the language being changed.
Mark – they would rather be wrong than late 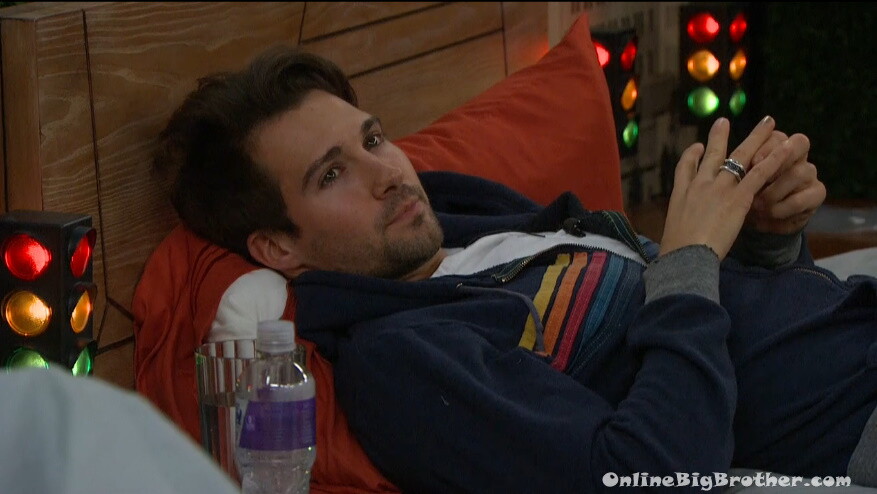 8:25pm Ross and James are talking about how the finale will play out. James thinks the game is sanctioned so it has to be fair. (LOL)

It is so hard to continue to like Ross and Marissa. They were my faves but many comments like “they can’t represent OUR show and such just grate my senses.

I really hope Mark would survive DE this Friday. He’s so close to final 5 and hopefully he can fly all the way into the final 3. I just hope James can win HOH next to keep Mark safe going forward because ross/marrisa is going to turn on his first chance they have. I would like nothing more for Mark to find out about the final 4 so if one of his noms gets off the block he can put one of them up and send someone from the 4 home.

Cannot believe that Mark is soooooo clueless! He believes he can trust Marissa & Ross….Yikes! And they want to get out Brandi instead of Ari because Brandi is more dangerous??????? Double Yikes! Well, at least it breaks up Ross’ 4. James better win the next HOH or he and Mark are going up. And that leaves us with Ross, Marissa, Ari and OMAROSA! It looks like it’s going to be Ross, Marissa as final 2. Yuk………..

Now is the time that the competitions mean everything.

Would someone please, for the love of all that’s good & holy………..get Omarosa out!

(P.S.- sorry about all the exclamation points.)

Wow, Ross & Marissa are so freakin full of themselves! Marissa’s delusion is that America is in love with them and that “they” are the show. F**k that! I wanna see big banshee Marissa and her stinky hair walking out the door soon then she can irritate the snot out of Julie with her fake ass voice

Good grief!! Do Ross and Marissa have to hold a press conference, hire a marching band to parade through the house, and fly banners overhead in order to sound the alarm loud enough for Mark and the rest to hear that they are undermining him at every turn? Mark!! Please tell me that if either Ari or Brandi wins the POV, or is otherwise saved, you will backdoor Ross. Geez!!! Why, oh why is it so hard to get “Rossa” / Ross and Marissa out the door?? Marissa isn’t even trying to do anything except support Ross’s win. Does Ari know that? Doesn’t Ari still want to win? It bears repeating: Ross has to go if anyone else is to have a shot at winning the game. People!! Do the math!! Ross has the numbers, not only to get any one of you evicted, but to secure the votes to win. No one has more alliances, real or fake. : – (

who is the target?

Stephe
Reply to  me

For sure I like Omarosa more than Marissa now. I want to see the shocked look on Marissa’s face when Omarossa makes it further than her. Go Mark

This could be better

Best case scenario Omarosa wins veto and takes off either Brandi or Ari forcing Mark to put up Marrisa or Ross.

So, is James taking credit for pretty much every move everyone else has made in the game yet? How long before he takes credit for breastmilkgate?
Brandi is blunt, rude, perpetually too much, and probably unhinges her jaw like a cottonmouth… while let’s face it, James is a bit too much when it comes to ego.
Would I rather see Brandi evicted than Omarosa? No. But i’m still convinced Omarosa’s got a contract rider to make it to final 5. Oh come on, I can’t be the only person that thought that.
Does anyone else pray for the moments when Marissa is in diary? Just for a couple of minutes of relative quiet? I don’t need to hear her rainman impression that there are 74 steps from her bed to the bathroom, 74 steps.
Mark? No, I just can’t with Sugar Ray. But then, I just couldn’t with Sugar Ray in the 90’s either.
Ross? Only one hamster per wheel Ross, the only person he hasn’t had a deal with is Chenbot.
Can all of them just fall into a sinkhole?
Oh. I forgot Ari? I’m sure Steve Harvey remembers her. She better love him, because without that monumental error, she’d be nowhere near the set of Celebrity Big Brother. Work that fifteen minutes.

Would love to see it. BTW Omarrosa was fired by the Clinton administration related to personnel issues. I have to agree with Ross- would hate to see her win. I used to find Mark attractive-back in the day- this is what happens when fillers go wrong-same with Brandi. Thought she was a great beauty before- now she has that drag on the side of her mouth- has gotten better with time but it’s still distracting.

I hope I don’t get hates from this comment/statement/observation but…..I think James is gay. My observation is that he has a ring (identical) on the same finger like Andy Cohen on Watch What Happens Live! I know it’s probably a stupid observation but I got a bit of a vibe.

I think James is gay as I am getting a vibe from him plus he has an identical ring on the same finger just like Andy Cohen from Watch What Happens Live!