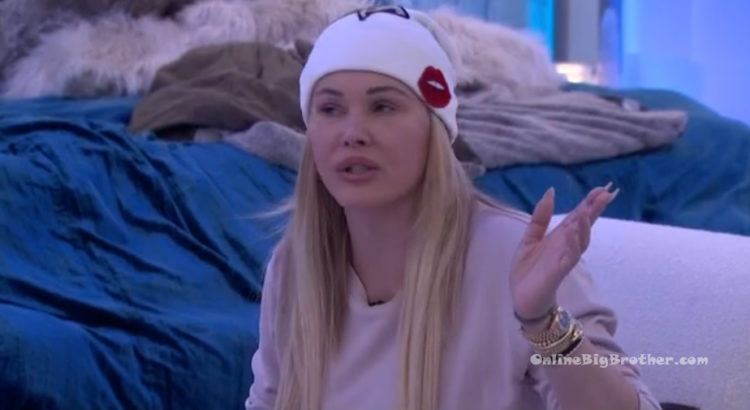 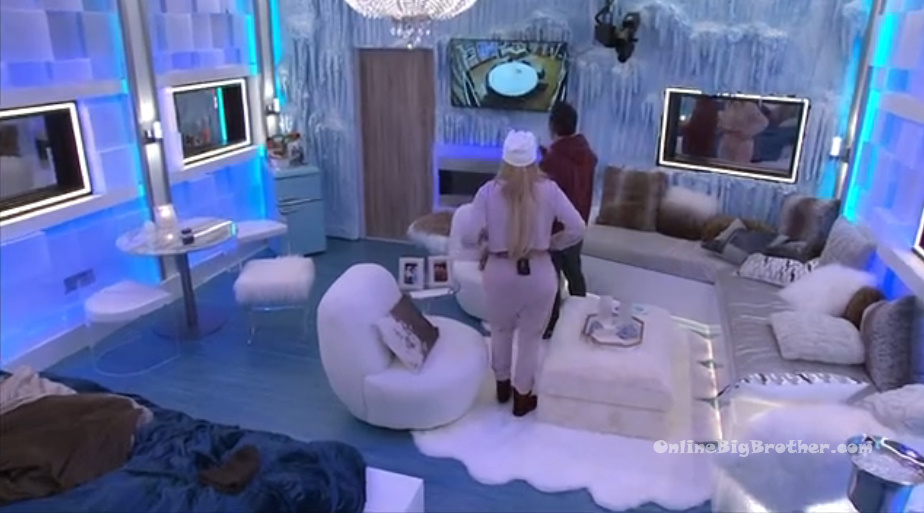 6:20pm HOH room. Chris Kirkpatrick and Shanna.
Chris – let her go rogue again. Whirl wind. And she could really start to shoot herself in the foot. If she makes it easy. Shanna – It just bums me out because like what the f**k Todrick! You know!? He was sitting in here with Miesha and being like I hate how Teddi comes from like this cushy life and like and all this stuff. Chris – yeah they keep saying that. Shanna – and for me its just as gross as anything about the opposite. And now he is talking about like how he is buying a $250,000 piece of judy garland memorabilia and how his house is 10,000 square feet and everything and I am like what the hell!? I just found it like sort of hypocritical. And so like what, I should be punished because my mom and dad worked their f**king a$$es off. It just kind of like hurt my feelings. He is like the Kardashians rented out my house and this person and this person rented out my house. I was like wow that must me nice! Chris – yeah he doesn’t need this. Shanna – and I was like wow I don’t have it like that at all! 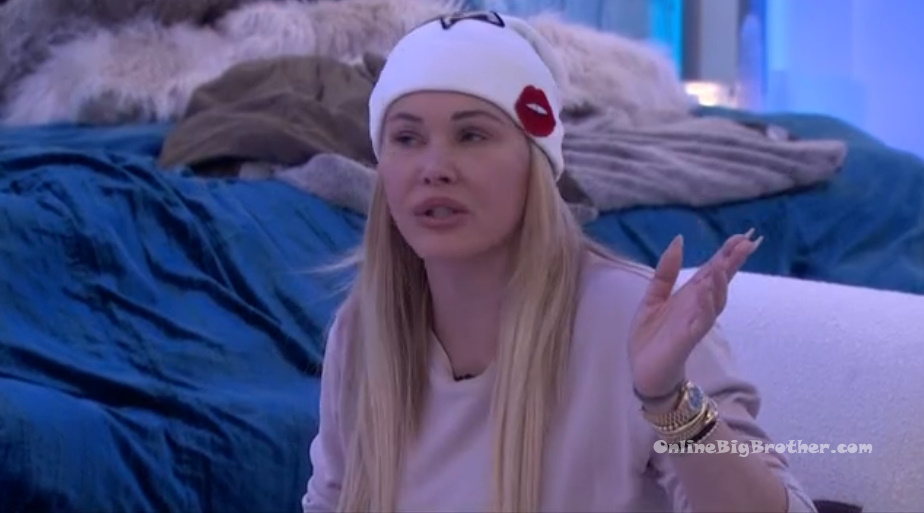 Chris – I don’t think Miesha would be gunning for me until really at the end. Shanna – Okay. Lamar is pissed. He was like I am pissed! Chris – at me? Shanna – no, not at you. He is just mad. And Mirai was like what’s wrong? And he was like Nothing! Chris – yeah its at me. Shanna – no, its not mad at you. Chris – Its at me but Todd told me not to do it. Todd told me flat out not to do it. And I don’t want to waste an HOH on that because .. and the good thing is if he keeps doing this somebody else can waste an HOH on it. And he could play in the next one. Shanna – yup. Chris – and win an HOH and that’s when we have to start thinking about the big move! And its all about where the cards fall. Shanna – you could not have won at a better time because I do feel like she will take care of you in the next one. You will have to really help protect me. I think she will be good to me for what I did for her. I think I proved my loyalty and my trust. Chris – I think so and especially when she said that Miesha really fell on a sword for us. That is pretty noble. That means something. I do really feel like at the next ceremony mine and your face could go on that wall. Shanna – yeah. Chris – because they might think we’re getting too scary and powerful… and another thing what if I win the veto and keep my noms the same? What is going to go through Todrick’s head to sway Miesha and go like Chris just won two comps in a row .. he a huge.. Shanna – I think she is going to be way more loyal to you than that. I think that he is going to go around the next couple days and campaign for Mirai. And I am going to go around campaigning like they’re very close so be careful. You’re in a good position. I think everyone could understand your nominations. Chris – right. If Miesha wins this .. this could be good for us. Obviously Lamar has been campaigning this to everyone .. you said he asked Cynthia.. and he asked me. If he goes to her and he is really getting tired and he gives her the ultimatum. She could waste that HOH on him. And not only that, that would knock Lamar out. Shanna – do you think she would do that? I doubt it but its a possibility. And depending we could even be in Lamar’s ear and be like there are ways of you leaving without quitting. You could always act a fool and blow up everything and get people angry enough that they’ll want to get you out. That takes another number off that side. 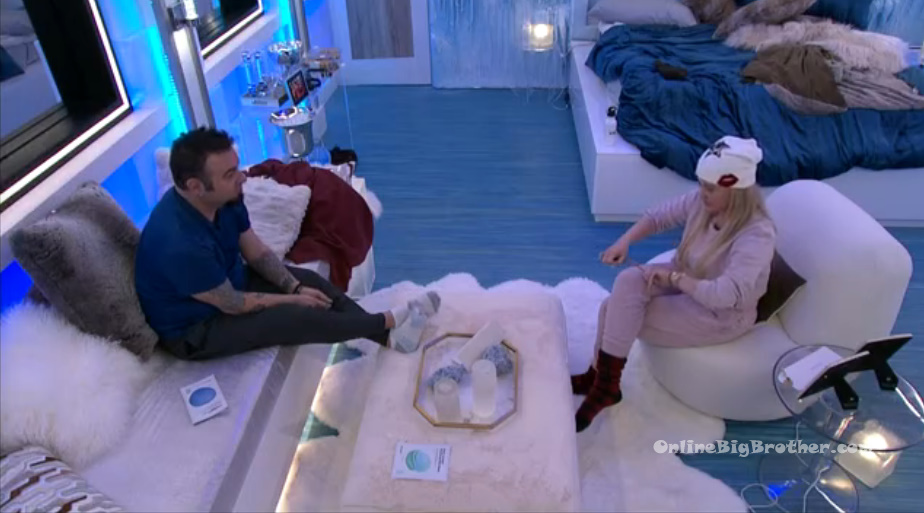 9pm Kitchen – The house guest are eating and chatting.. 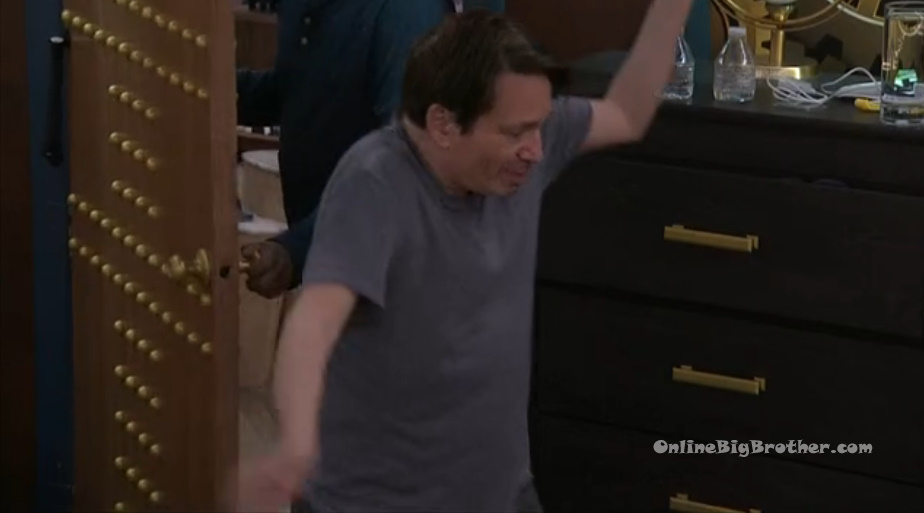 Does Lamar want to go home? I feel like I missed alot.

Yes, he’s fine with leaving. He also really doesn’t understand the game or know anything about it.

I’m not really sure unfortunately … He might have just been acting..

He doesn’t know anything at all. Dumbo

Does anyone have the background on this Mirai – Chris Kirkpatrick fight?

On social media they’re saying Mirai went way below the belt – called him Justin Timberlake’s “back up dancer”, old etc but apparently that wasn’t the worst of it. She implied he was being “creepy” towards her which is what upset him. (it also said she took it all back after the fact denying he was being out of line”)

Then I’m seeing Teddy’s post game interview where she’s sort of hinting that Mirai acted upset to be housing with men & was hysterical & then 2 days later is suddenly constantly in rooms massaging them (Lamar & others). Teddy is definitely implying the entire thing is being done for game & camera time.

I’m confused is Mirai like the biggest BB Drama creator ever – an evil mastermind or what?

I also read both her/Lamar wanted to quit but stayed only b/c they won’t get paid if they leave this early.

It sounds like Mirai is causing a ton of issues with production & behind the scenes but her edit hasn’t hinted at any of this (not that we haven’t seen that before).

Anyway – any extra intel you have on the fight would be appreciated.

P.S. there are also reports that Todrick’s cut throat attack on Carson has something to do with bad blood behind the scene’s of RuPaul’s Drag race. — Again I don’t know specifics but it sure seems like Todr is being jelly.

Love to hear about any intel anyone has on the above. Thanks

Unfortunately I don’t have details on either of those situations. Todrick and Carson do look like they are possible frenemies. Meanwhile watching all of them sit down for dinner and clean up makes me realize what the regular contestants haven’t been doing most of the seasons thereby causing ant infestations during those seasons

i have no knowledge of what was actually said i the prefeed nsync skategirl debacle.
the only thing i’ve picked up is from a conversation between kattan and skategirl.
he told her to be careful about what you say behind people’s backs.
she told him she’s learned her lesson.
so, i’m going to go out on a limb and say skategirl was talking to the women in team formation about nsync… and one of them ran it back to him, leading to a confrontation.
toddrick and carson? according to toddrick it’s just like when they were on dragrace and he was left out when carson would be hanging out with rupaul instead of him.
so… petty crap?

what i understand to be the dynamics.
2 “sides” formed.
the 2 sides are slowly dismantling themselves and each other back to pairs.
current hoh wants to suck up to whichever pair is in power to target the other pairs without anyone noticing they hop from side to side. 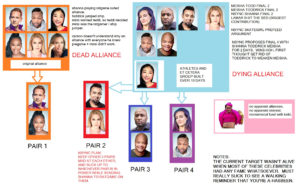 Is this really the conversations? It’s so tough to even read it and make any sense of it.

Kudos for watching the train wrecks and typing them out.

So the “ cook out” is silent on Twitter abt Todrick’s erratic gameplay….. must be that he’s housing several of them right now in his 10,000 sq. ft home….. don’t diss the landlord

Sure hope this morning’s musings were real and not just for show. Kirk got annoyed by the strong arm maneuvers of Todrick/Miesha trying to get him to put up Carson. They spent far too much time trying to guilt him into keeping Mirai stating Kirk will be detested outside BB for taking out the only Asian person in the house.

It was shady & Shanna told Cyn there were other “dirty” things being used & said by Todrick.

Kirk’s new plan is to remove Kattan from the block & instead of Lamar re-nom Todrick with Cyn/Car/Shanna & Kattan voting him out. Even if Kattan is a wild card he’d vote to keep Mirai b/c he already told Kirk he feels she deserves to stay so not to take him down – once he recognizes he’ll be safe & can keep her too I think he’ll be on board.

He’s seems closest to Mirai & Cyn plus there is the weirdness between Todd & Kattan — I think b/c Kattan saved Lamar instead of him with the hat (fwiw – he plays a very weird game).

Anyway – I’d enjoy seeing the shake up b/c Todrick has played a messy game that reeks of jealousy and hypocrisy so it would be apropos if this week turned from him saying he would be the puppet master of Kirk’s HOH to being the one evicted.

Besides, – I’d love to see him be ousted by the people he turned on & has been spewing nonsense about.

As an addendum to the Kirk plan to backdoor Todrick there is one MAJOR problem which is he essentially has to win POV now b/c of how many people know about the plan.

That’s one of the biggest issues with the Celebrity version of BB — NO ONE seems to understand the phrase “need to know”.

By telling Shanna she immediately told Cynthia & Carson – now I don’t think they’ll say anything to anyone b/c they’ve already been burned. He hinted to Kattan but that’s fairly innocuous b/c he doesn’t really game talk or understand what’s happening anyway.

Kirk DOES need to tell his bestie to not say anything though b/c she’s brutal with the loose lips.

At least the two people she won’t tell are Miesha or Todrick but he needs to tell her NOT to say anything to Lamar or he may as well just announce it to everyone.

None of them seem to be able to keep things to themselves – I lost track of how many of them blurted out who they working with in front of others. With the normal BB cast that would’ve sank Todrick’s ship the first week b/c he kept getting outed for alliances he was in right infront of other people he was in alliances with.

It was one of the things I found odd about his & Miesha’s ride or die friendship – he never gave her the heads up about “Formation” she learned about it from Teddi, Mirai & Shanna. Todrick didn’t bring it up to her until this week. She said loyalty was so important but he wasn’t held to the same standard. ODD.

Anyway I always have to remind myself most celebrities aren’t BB stans & don’t naturally understand the strategy of the game – or even the little nuances like not sharing information others don’t need to know until absolutely necessary.

There was NO NEED for Kirk or Shanna to tell anyone – he should’ve said let’s keep this quiet til we see what happens in POV. We know Cyn/Carson will vote the way we want & Kattan wants to keep Mirai so we’ll have the votes but let’s keep it between us until we know the results.

Thanks for the update!

another name
Reply to  Robert

he should have said he had depleted breast milk.

Hi, totally off topic. Anyone know the designer of the sparkly denim shirt Carson has been wearing?

I’m pretty sure it belongs to Todrick, as I saw an interview about 6mos ago & he was sporting it.

It must be mine. Thanks BB crew.

I need this shirt!