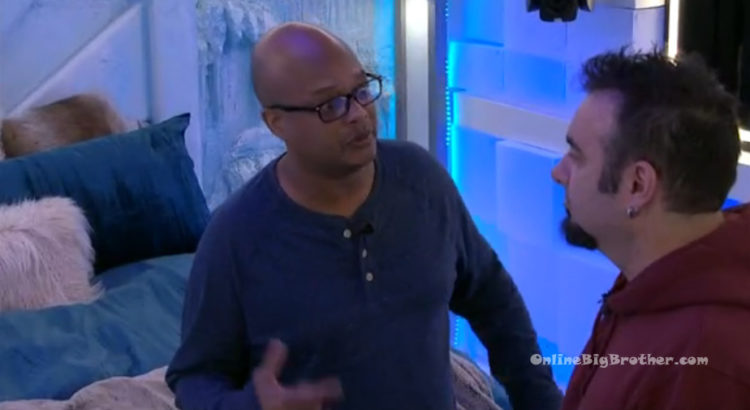 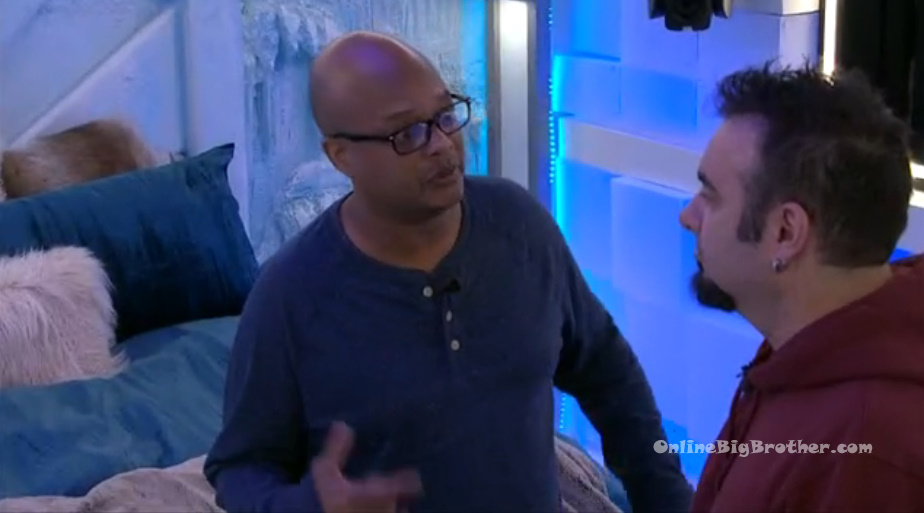 11:40am HOH room. Chris Kirkpatrick and Todd.
Todd is talking on and on about nothing. Chris – Okay Todd! Shut up and sit. Todd – okay. What’s up? Chris – lets talk. lets talk because I’ve got to nominate today. Todd – oh damn! MMmmm..yeah! Chris – so I know where your head is at. What would you think if I put up an obvious target for me and for you … and we know who that is. Todd – Okay. yeah. Chris – now who do I put up against her? Chris Kattan? Todd – someone that can win. Chris – so that’s no him. Todd – no, that’s not Chris. Don’t put him up .. Chris is not going to win. Chris – I mean I have a chance to compete in the veto too. Whoever she is against has a chance to compete in the veto too. And then three other players have a chance to compete in the veto. The ultimate would be if I could get Miesha.. because Miesha could crush a veto. Todd – yeah … so here is the thing.. who do you want to put up? Chris – I don’t want to put anyone up. Todd – yeah I know but you’re going to have to. Chris – I know, I mean right .. just Chris. Todd – whoever you want to put up, you have to put up someone against him that can beat him. That is how you do it. Chris – listen you can beat him but I don’t want to put you up. I don’t want to put you up at all unless it was a pawn situation but even then dude… pawns go home! Todd – let me tell you something dude… I was up there and its the most nerve-racking feeling. Chris – plus she (Mirai) is a scary player. REALLY scary! We saw what she did before right! Todd – but I think we have her loyalty now. Chris – no, she’s gone though! She’s my target! Todd – oh she’s your target … then take her out! Chris – its not about that ..its who do I put her up against to make sure she’s my target. Todd – you have to put her up against someone VERY strong. Chris – but then that’s putting somebody.. who is that putting up? Because if I put up Cynthia or Carson …then our side of the house is going to say lets get rid of Cynthia or Carson, right?! And I don’t want to get rid of Cynthia or Carson… I mean I do but they’re not my target right now. 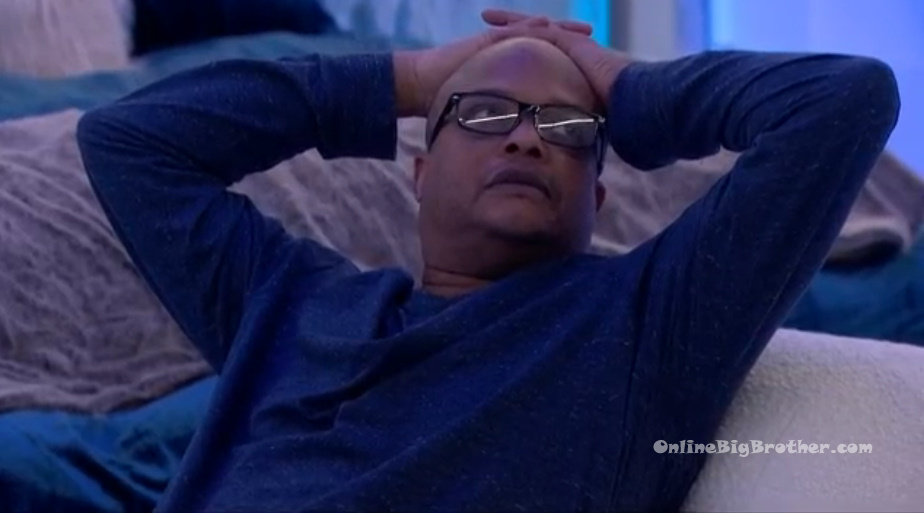 They call Lamar in. Todd – who do you think we should put up? Lamar – I dunno. I already told you what I was thinking. But besides that .. what does you gut say? Because the name of the competition is to take out the competition .. right!? Chris – right. My gut is Mirai. Lamar – cool. Go with it then. She already did you wrong so its already a little personal. Chris – yeah, so who do we put her up against? Do I put you up? I don’t want to put you up. I don’t even want to put the other side of the house up because if I do that our side of the house is going to want to vote them and not who I want. Todd – no that’s not true. You tell me who to vote and I’m going to vote. Lamar – here is the thing .. if you put me up next to Mirai and she takes herself down.. Chris – right but there are other people who are playing too. Its the HOH, the two nominees and 3 other people .. so its not just you and her. Lamar – ohhhhh! I did what I came here to do. Chris – you can’t leave .. you’re intricate to a lot of people here now. You’re really intricate to him (Todd). Lamar – I think Mirai is a tough player. Todd – she is a competitor dude! Big Brother blocks the feeds. Shanna joins them. Chris – I’m worried about putting up someone else who everyone will vote out instead. Todd – you’ve got your alliance ..tell people who you want to go. Chris – but who do we put em up against. Todd – it doesn’t matter .. you tell people who you want to go and you’re going to get one, two, three, four, five votes. Chris – she can still pull her self down. All she has to do is lose the veto.. if she loses the veto we have nothing to worry about. If she wins the veto, I put up Chris Kattan. Shanna – do you think if you talked to the three you could ask if one of the three would be willing to go up as a pawn? Todd – HEY! I already did that pawn sh*t! That sh*t is nervous! Chris – pawns go home though. Todd – yeah sometimes they do! 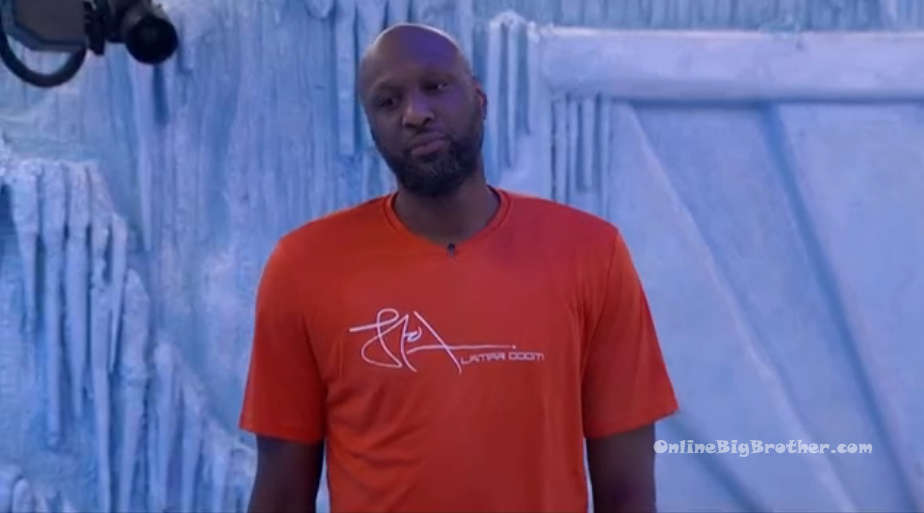 1:30pm Storage room. Carson and Chris Kirkpatrick.
Chris – I can’t put you guys up. Because even if I put you up there they’re going to vote to get you guys out… and its too early to make any big moves. And I would rather just kind of lay low. Because even on that side we vote with them but there is nothing really that we’re in to…. and there could be potentials where we could all work this out because there is a lot of dangerous things in this house and we have to be very careful of it and not so definitely whatever happens …win the next comp! I mean that would be ultimate!!! Carson – the next HOH?! Chris – yeah the next HOH because I can’t play in it. If Shanna wins it, we’re good. If you win it, we’re good. If Cynthia wins it, we’re good. But if any of them win it… there is trouble! Carson – okay. Chris – I am aligning myself more with Shanna now but I still have a loyalty to a point. And I want to help you guys as much as I can. I don’t even mind if I get voted out next. I love this. But I am trying to stay. If I do, I do. I want to help you guys as much as I can. Carson – do whatever you need to do first. 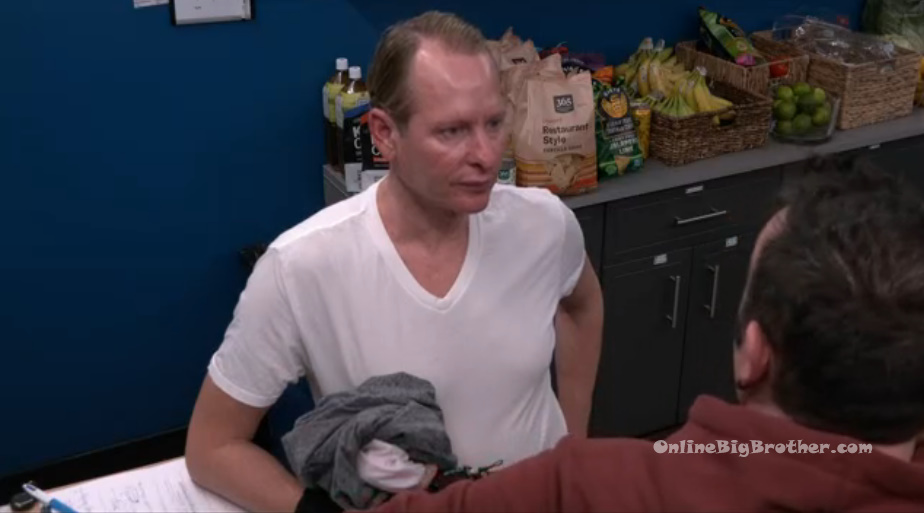 After reading these conversations, I’m thinking we have missed a great deal of what is going on. I’m lost.

Omg, Lamar! He doesn’t know wtf is going on! He really thought you could be crowned the winner after you’re evicted ? They had to literally tell him that YOU HAVE To STILL BE IN THE HOUSE!… some ppl may be amused by him but I find him a waste of space , plus crapping the bed on live tv is f’n gross

I am dumbfounded by his ignorance. His body is broke down and he is soooo slow.

This is painful. The guide channel is livelier than this. Dawg how do you stay awake?

LOL Yeah its not easy at times!

I read somewhere that ChrisKirk leaving the house may have been because Mirai said something, either about him or NSYNC. That would explain why he’s so strangely focused on getting her out. There was no build up to that, it just seems to come out of left field. Can anyone confirm that drama between Chris and Mirai?

Early on she referred to him as “a back up dancer for In’ Sync” or something like that and he didn’t like that!

I’m reading now that she also had a run in with Todd Bridges. Yikes. I think she’s probably better off leaving now lol