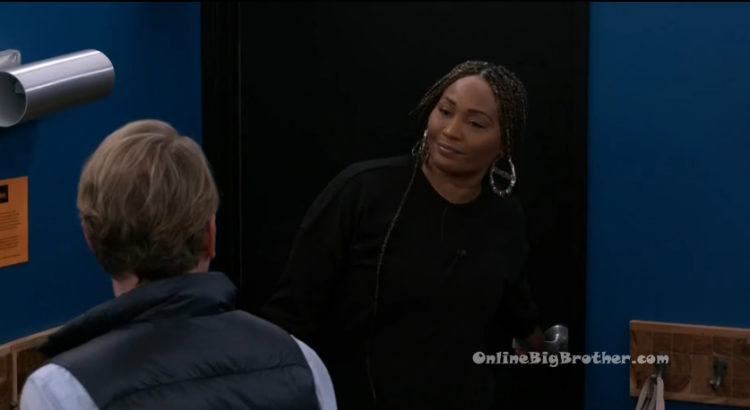 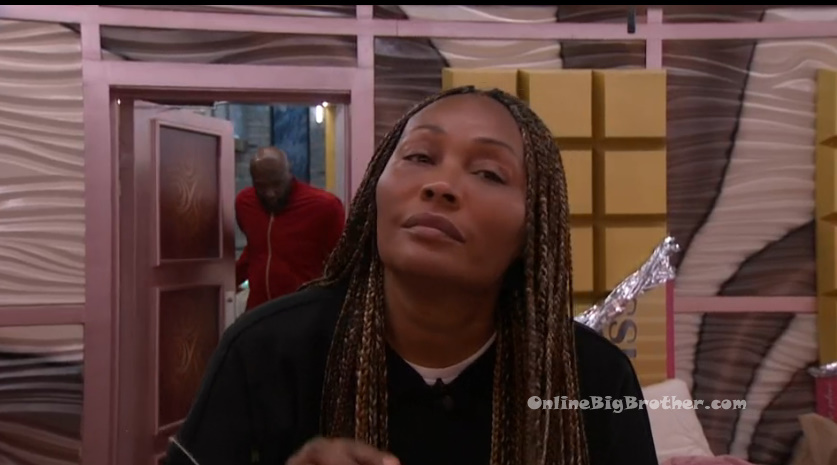 11:36am Bedroom – Lamar and Cynthia.
Lamar – yeah lil’girl its kind of like what I was just telling them. When you start seeing the finish like that’s when you got to get your sprint on! Cynthia – hey, that’s where we at! I woke up with that same realization. Lamar – so it don’t make no sense to pull back now. Cynthia – no, no, this is it! Because I’ve been kind of feeling like a sitting duck at this point because of the position that Carson and I are in but we’re going to try and fight on our way out. Lamar – all this time without my kids. It makes no sense to pull back now. Cynthia – oh absolutely, they would be so angry at you. They would only expect you to fight. There is only one champ in the house. ..well I think Miesha is a champ too with the wrestling thing though right? Lamar – yeah. Cynthia – okay, two champs in the house! Well I guess Mirai was considered a champ too. 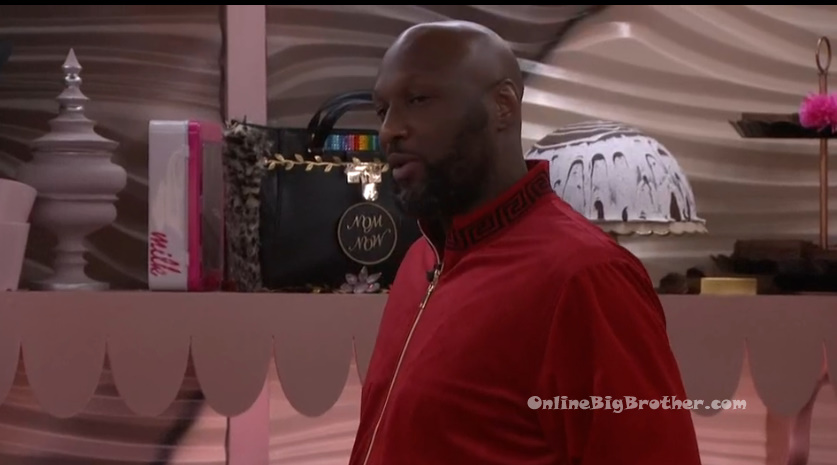 11:57pm – 12:44pm Big Brother blocks the feeds for the veto ceremony. As the Veto holder, Miesha decided not to use the veto. The nominations of Carson and Lamar remain the same.

12:47pm Miesha and Todrick.
Miesha – I can’t believe this ..this is so crazy. Part of me still feels bad though. I really do. Todrick – its okay. Miesha – I know. We’re not supposed to give people more chances to win right. Todrick – no. Not after all we’ve been through. If I am going to exist in a room with Lamar for over a month it needs to be worth it. Miesha – yeah. Todrick – period! Miesha – True. Todrick – because that has been a STRUGLE! Miesha – yeah. 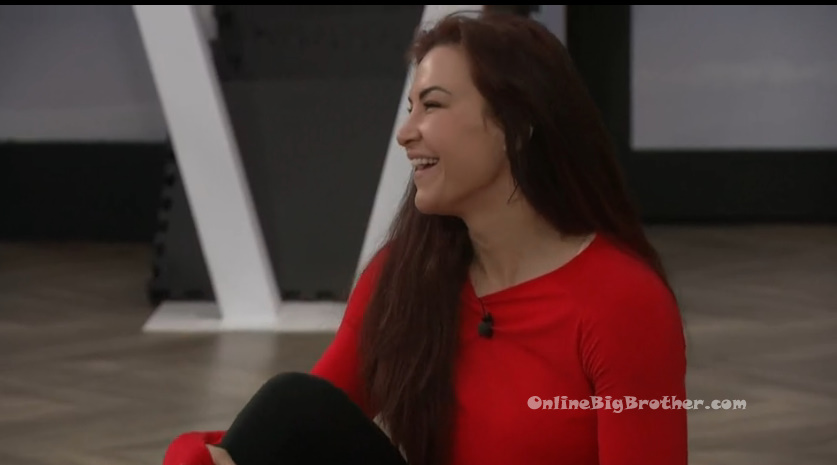 12:52pm Storage room – Carson and Cynthia.
Carson – that worked out as best as it could. Because now I was afraid that she would switch it but now you and I aren’t up there together which would have been the worst case scenario. But she said she wouldn’t and she didn’t so she is very trustworthy. Cynthia – very much so. Carson – now we just have to have a sit down me, you and Todrick …in our room at somepoint before tomorrow and we have to figure out if it should be earlier or later. And I think we just say, hey listen we made a pact to take care of each other in here so now is your chance. Cynthia – right. 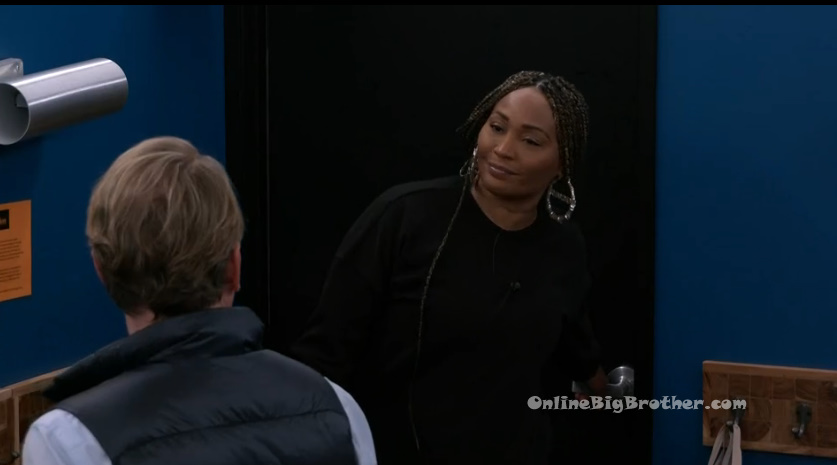 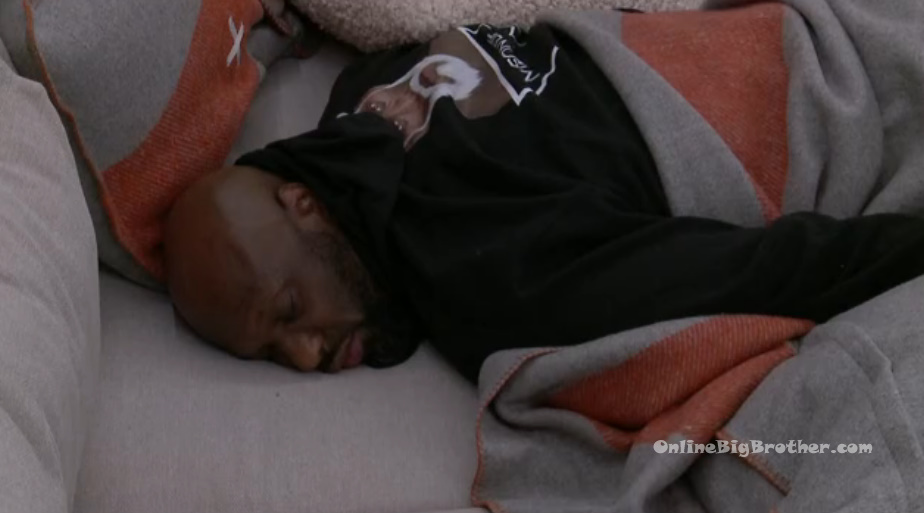 11:20pm Bedroom – Carson and Cynthia.
Carson – either I stay and its a new game or you stay and Cynthia gets her grove back.. because you’re going to be one hot commodity. You’re the “New Chris Kattan”. Start sleeping. Cynthia – hilarious! I didn’t even think about that. Carson – I think he meant that when we made that little agreement to watch out for each other so unless she puts the hammer down. Cynthia – and she would have to .. I think that’s the only way that he would do it. Carson – I think unless she says I am going to get rid of you .. I think he is going to stand up for me. Cynthia – Here is the crazy thing with how the universe works.. she (Miesha) is irritated with Todd and Lamar. Carson – I know. Its very good timing. Cynthia – the timing couldn’t be better. Carson – and they need to calm down and not be so.. like they are being grumpy with her. We’ll vote to save me, Lamar will go home .. and you and I will be a team. They’ll be a team. And Todd is going to be the odd man out. Cynthia – and Todd is so mad because he just realized he was never in our top two. Carson – he’s been on a pleasure cruise this entire time and now he is all of a sudden popping up. 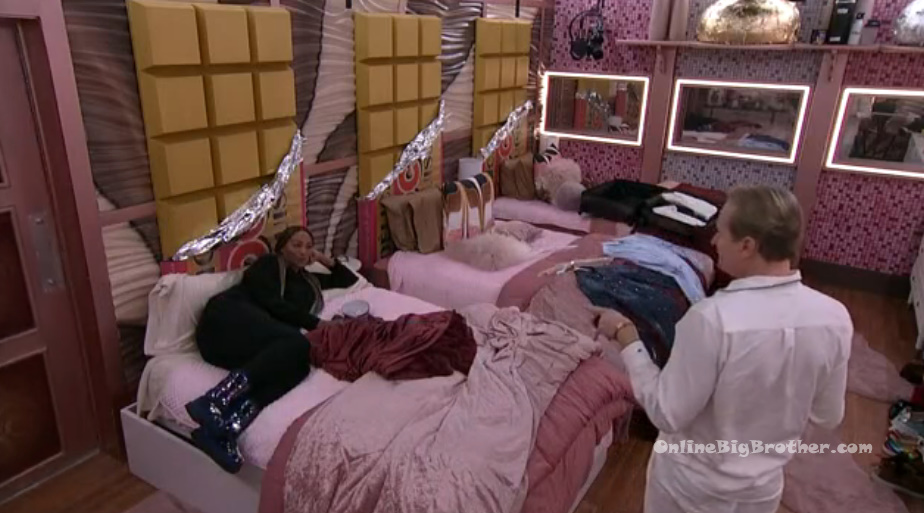 1:30pm The house guests are sleeping..

2:15am Todrick and more cards. 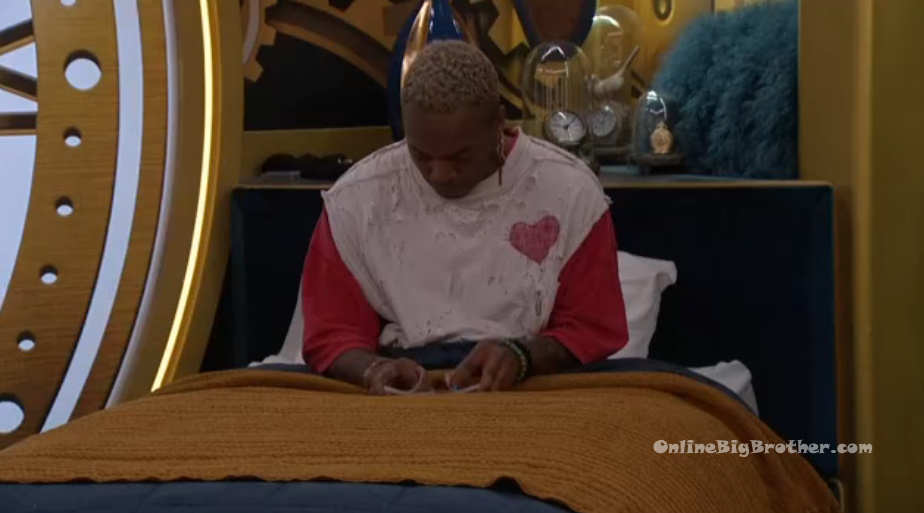 Can’t wait for Shanna to see Carson voted out!

I agree.I was worried that Carson was going to skate by all the way to the end.

And that folks is what karma looks like haha

Yep! Karma is a bigger “B” than any person could ever be!

Lamar is riding for free too. He has no game.

So when these 3rd 4th 5th rate and who the hell is that celebrities are evicted they go home and can watch or hopefully are told what actually happened,does that mean Todrick won’t get a single vote?

KathyK999
Reply to  No Name

Cynthia is stupid enough to vote for him anyway.

She’s all doting on Todrick!

Come back and not much has changed. Looked on social media and saw there’s a Todrickexposed party…. which would be humorous if every single exposure isn’t something that’s been known for a while. I mean… NONE of the big ‘shocking’ revelations are things that haven’t been out there for months / years. Rotten to work with? Known. Fails to pay? known. Asks followers to buy him things? known. Huge mismanagement through seperate shells that all list him as owner or ceo? Yup, knew that too. Sex workers and allegations of sexual harassment by former employees? Yeah, that’s not new either… that’s like the oldest of the bunch. So… what exactly are we exposing that hasn’t been out there for a long time? He’s an ass. That’s been established and known for-EVAH.
In terms of game? Looks to the left, looks to the right…. oh, are they still “playing”?
Want a bit of honesty? If I were a voter this week, I’d actually knock out Lamar.
He’s a layup you drag to finals…. which means I’d consider him a threat to me getting to finals. Here’s my way of thinking: You can appease Todd, who can’t play next HOH, or you can join with Carson and Cynthia (constantly saying play clean) and keep the target off your back for next evictee because everyone is targeting Todd…. who can’t play in the next HOH and by getting rid of Lamar, no longer has a buddy. But, I guess that’s just me.

Safara
Reply to  another name

I SO WANT TO KN MORE ABOUT TODRICK!!!.. I DIDN’T KNOW WHO HE WAS TILL BB, SO PLEASE TELL ME EVERYTHING!! I LOVE IT CAUSE HE NEEDS TO GET HIS HEAD OUT OF THE CLOUDS!!

Carson – now we just have to have a sit down me, you and Todrick …in our room at somepoint before tomorrow and we have to figure out if it should be earlier or later. And I think we just say, hey listen we made a pact to take care of each other in here so now is your chance.

Wonder how that discussion is going to go?

I just joined the discussion. Can someone please tell me why Shawna saved Carson with the POV instead of Cynthia? It seems the Chirs nomination was retaliation by Meshia. If Cynthia had come down, Todd or someone else would have went up and that person would have been evicted, preserving the numbers for Team Shauna.

another name
Reply to  Ringer

Yes, she was playing the game, but she was also completely depending on nobody ever communicating, and not being in on the conversations to steer them. Floating in the classic sense (not the bastardized coasting sense) depends on controlling all flow of information. She got the jump to whoever’s in power (or at least say you are with them) part down, just didn’t cover her tracks and got sloppier and sloppier as time went on.

They clearly didn’t trust Miesha to put up Todd regardless of who they took down — if Miesha put up Kirk instead of Todd if she pulled down Cynthia then Lamar/Todd/Todrick would’ve controlled the vote.

Still, it’s what they should’ve done.

Did you notice tonight Todrick is telling about the dancers/costume controversy to Miesha — GEE what a coincidence that just as Twitter is blowing up with #todrickexposedparty he’s speaking about the three main things highlighted in it the posts? Earlier this season the DR warned him he was coming off poorly & to watch what he was saying & he ignored them – this time I guess they gave him full details so he could address it in the house to get out in front of it.

I mean, i’m not surprised they gave him a head’s up… but he’s a toxic waste dump. He’s going to be the Couch post season, I can already see it.
At least he stopped dumping on his mother… for now.

“They clearly didn’t trust Miesha to put up Todd regardless of who they took down — if Miesha put up Kirk instead of Todd if she pulled down Cynthia then Lamar/Todd/Todrick would’ve controlled the vote.”

You’re probably right. Initially Miesha seemed ok with Shana’s plan to take down Cynthia, but Miesha did appear to later have 2nd thoughts about Shauna changing the noms.

Safara
Reply to  another name

Probably the smartest one in there!!!.. you can’t let ANYONE in when your playg this game,keep your cards close to your vest or you could end up like Todd that has no one,or it could come to you and your best buddy (that’s what you think he/she is),,,just my opinion

another name
Reply to  Safara

If you are playing the game in the floater style, it’s not good enough to just haphazardly stir the pot. You have to control the perception and communication of everyone else. She failed.

No Name
Reply to  Ringer

It was Chris Kirkpatrick’s idiotic plan to save Carson who would have been evicted if he stayed on the block.

For AFP, even though he screwed up, I am voting for Carson. I just can’t vote for Shanna

I don’t believe in cancel culture. Game is game. It’s how you play it is what matters. I don’t like how Toddrick played the game or how he treated people in the game. He was disrespectful. Cynthia played a mean girl game and expected a lot. Yes Shanna played both sides of the house but so did Toddrick until he realized he could use Meisha as his shield. The house cease to be nice to Shanna and blocked her out. Instead of it being game play it became personal. My top 3 are Meisha Lamar, and Todd.