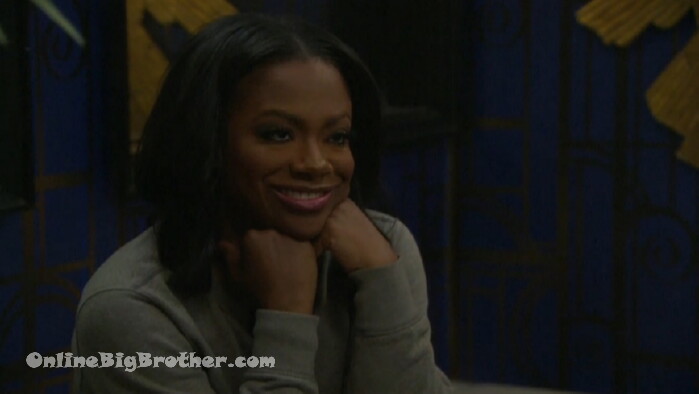 Tom and Kato were nominated 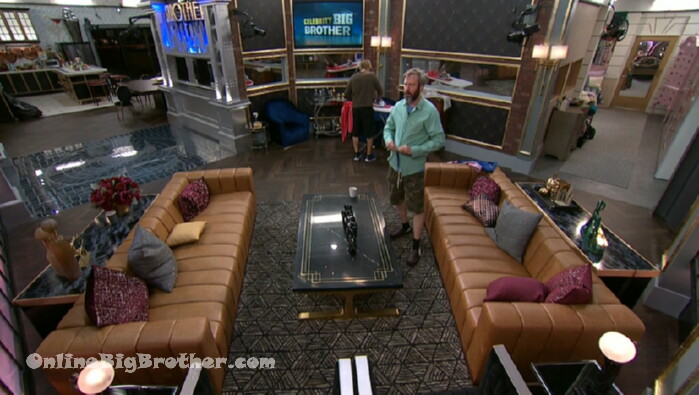 11:01am Tom and Kato
K – Oh my lord I can’t take this.. I don’t want to say anything
K – I’m thinking if I won Veto.. It would make Good TV if I gave it to you
Tom says he thought of the same in reverse.
K – I have to feel like I have a chance..
Tom says it’s one way to get out of the house 3 days earlier.
Tom – it’s sorta not really like quiting.. we can really really work hard for that veto than give it to the other guy
K – I’m going to feel it out..
T – I think you should use it on yourself and go win the damn thing I would actually get no greater happiness
K – that’s really nice
T – I don’t want you to give it to me .. I will not accept it 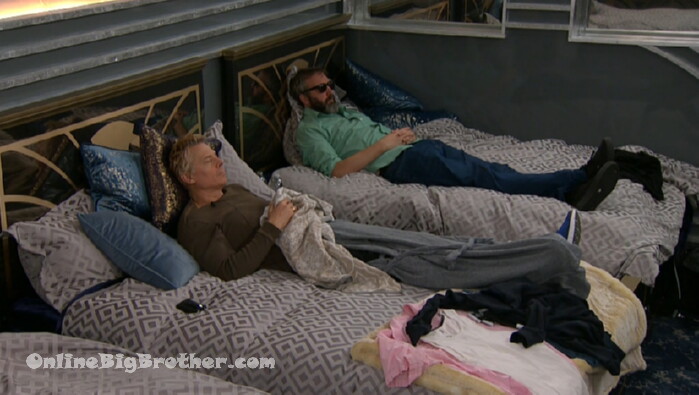 NOON – 12:25pm
Tom – we could psychological trick them into thinking..
Kato interrupts him says he’s certain they are going on the block.
T – are you going to fight hard for the veto
K – Of course.. but you have to hear my thought..
Kato told Kandi that Tamar is making the weakest move in the game Tamar’s strongest move is to take out Natalie or LOLO
K – I know it won’t happen, if she’s smart which I know she is that’s the move to make..
Kato – You can think of all this things but I’m telling you.. Don’t drive your self crazy Tom
T – in my scenario .. If I’m wrong I don’t have to over exert myself running through Slime
K – once you’re out there you are going to go Screw it I’m going for it (For the POV)
T – it’s all counter-intuative. every time Jon tried really hard to win they knock him off.. Trying really hard to win right now is going to make you appear like a future threat.
K – If I try really hard and lose I hope you win
T – if you try really hard to win and I look like I don’t give a damn then we are both here next week .. we can still make final 2
K – right .. I’ll tell you..
Tom – what
K – It’s great you are thinking of things .. I’m going to try it’s in me I’m competitive
T – I’m thinking more of a physiological game.. don’t tell them I’m not trying
Kato – do you think I am going to talk to anybody
T – play it up like Tom’s not feeling well.. I think he wants to go
K – yeah of course
Tom – It could work right.. If I’m down why wouldn’t they put LOLO up

Kato Smiles “One of us is going home”
T – don’t give up.. We can literally both be here next week if we plan it just right.. it’s hilarious.. try try..
Tom – you fight for the veto win it I’ll look like I’ve lost all hope.. You take yourself off the block and I’ll be mopping around..
K – wait a minute if that’s today that means the veto is today..
T – the competition’s today
K – yeah.. this is horrible I need to work out..
K – the eviction tomorrow that means the Veto competitions is today.. it’s pouring outside..
Kato reminds him that the time between now and eviction is nothing. (they don’t have a week to work Tom’s plan)
Kato – we’re defeated already that’s what they see.. let them think that

Tom – the desperation of fighting for the veto is embarrassing for me..
Tom tells him the one that survives needs to win the next HOH and at least knock one of “them” out (Ricky, Natalie, LOLO)
Kato agrees says that’s it that’s their only chance “I’m going for it.. ”
Tom – I could go for the veto today and ..
Kato – I’m going for it I’m competitive..
Tom – you’re chances of staying are a little bit better..
Kato leaves to work out. 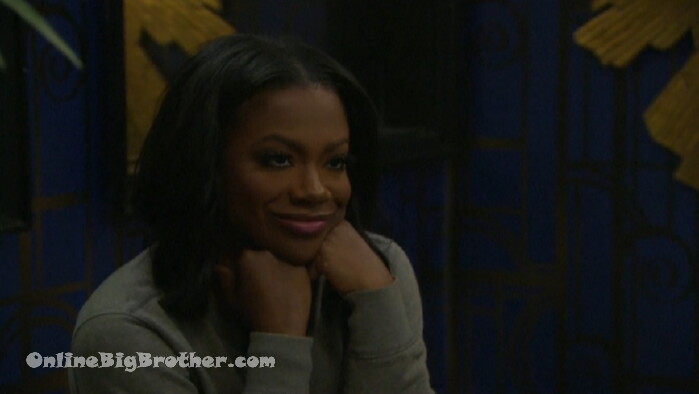 Kandi – another scenarios .. next one to go on the block is who.. Tom and Dina? what if Tom pulls himself off the block..
Tamar – They’re not going to put you up
Kandi – but if one of them wins the veto..
T – who Tom
K – yeah
T – you’ll go up but you’re not going home
T – I know so
T – I chose you to have a final 5 not Joey
Tamar – Tom and Kato both Gotta go I’m telling you trust me..
Kandi – Okay 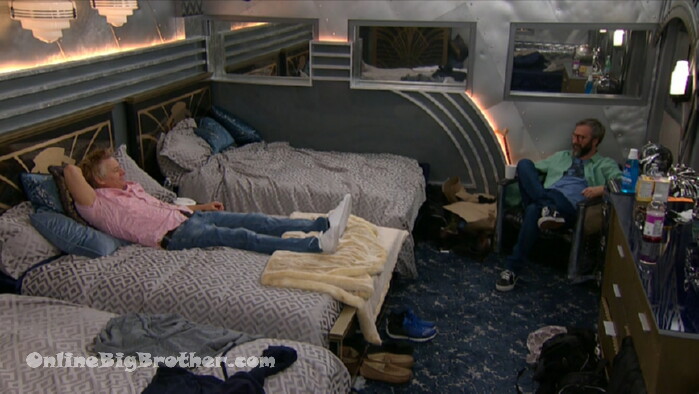 Tom – Did Ricky win a super bowl
Kato – no
Tom – than this is Ricky’s Super Bowl
Tom – thos are really good teams right?>
Kato – every team is really good.. You get drafted you’re pretty good.. you play it’s even better.
Kato says Ricky is set for life “His pension is pretty good.. It can’t be touched..”
Tom – we were close.. we were close Kato..
Tom – when did we put up JOey and Kandi.. ON my HOH?
Kato – at that time we kinda thought..

Tom wonders why they didn’t break on their alliance right away why did they wait for after they nominated Dina/Joey.
Tom – I thought Joey or Kandi had the power .. even without the veto the power would have brought someone down I thought..
Kato – we had all these things in my head
Tom – hindsight is 20/20
Tom – just a few days before we had Joey, Ryan and Jon against us..

Tom thought Ricky was going to “get us later.. like 2 weeks from now” (after the season is over) This is why he wanted to get Ricky out first on his HOH. 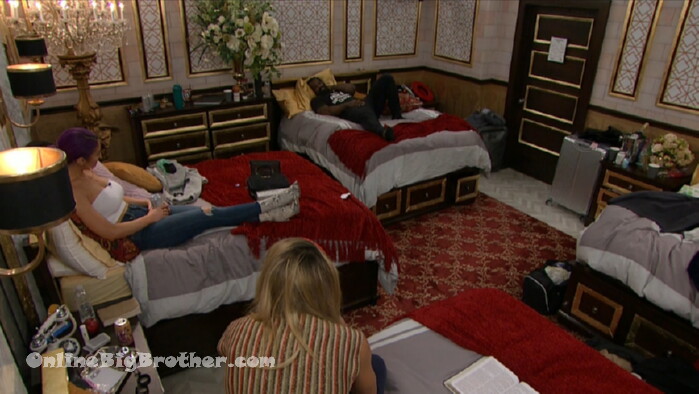 2:05pm Ricky, LO, Nat
Nat – if it’s 5 who will our ideal 5 be
R – I think us 3 and Dina.. and Tamar..
Nat – that would be pretty amazing if our room made it
Lo – Dina and Kandi are in good places right now
Lo and Ricky agree that Kandi doesn’t trust them because they ahd “That thing with Tom”

Lo reminds them that Kandi is “Smart” she’s a fan of the show and has been watching it
Nat – that’s why we need to win the next 2.. not this one the next ones..
Lo – so we’re not trying to win this one..
R – we might have to
Lo – Yeah
R – I would just be sick if Kandi won.. she would be all dancing .. it would be hard for me.
Natalie says Kandi is “Ruthless as f***”
Natalie says the three of them would be targets of Kandi wins HOH

Nat – so basically
Lo – just win
R – yeah
Ricky doesn’t think Kandi “isn’t that smart.. she’s lucky no doubt about that.. I wouldn’t say smart she’s just not savvy in the game”
Nat – tomorrow HOH will be important cause one of those f* heads will still be here.. we have to win everything
R – that’s not a bad strategy
Nat – If one of us wins HOH tomorrow who goes up one of Tom/Kato and?
R – if I win I’ll just go around and ask everyone
Nat – Tom or Kato and Dina or Kandi
R – yeah ..
R – I mean I was thinking if I won put Dina and Kandi up and backdoor the guy
N – what if we don’t win the veto
R – the only person that wouldn’t pull the person off is a guy anyways so I would rather give him 1 chance instead of 2
Girls agree..
Lo – that is why they were trying to backdoor you ..
R – if it backfires you have 2 people pissed off at you 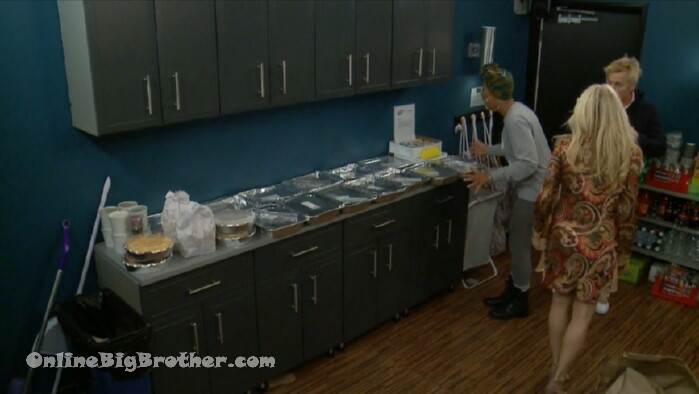 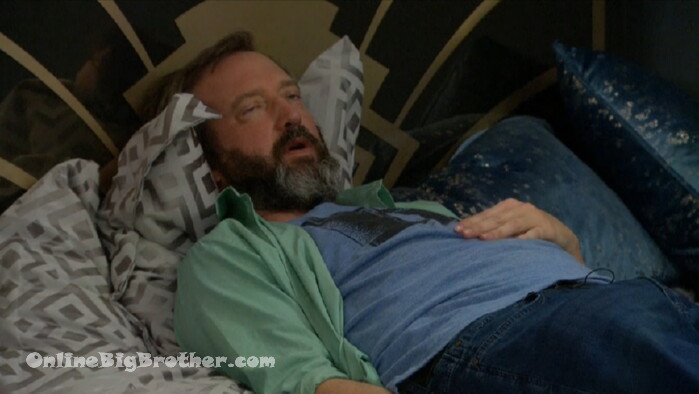 6:12pm it’s been pretty slow..
Tom – the only 2 people I’m rooting for to win is you or myself.. after that I really don’t give a damn who wins.
Tom says if Kato is left in the house there’s no way LOLO would partner with him neither would Natalie.
Kato – they would try.. they would be so worried it would be great television to see them grovel
Tom – you really think they would you don’t think they would be so over confident they got Ricky, Tamar, Dina Kandi
Kato – not if I win HOH
Tom – Ohh after you win HO that’s a different story.. well everyone will grovel if you win hoh
Tom – the funny thing is that scenario is entirely possible 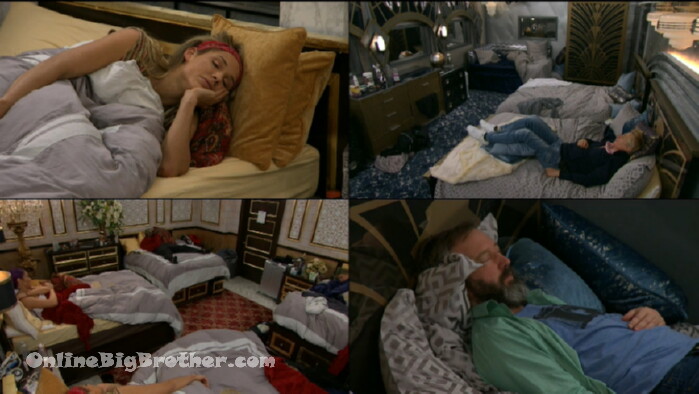 Tom telling Kato to stop going over Tamar’s speech because caring too much is just embarrassing is chuckle worthy.
I really do like Tom when he is just being real.

Unibroue delivery for Tom right now, if I could.

Karma is a bitch, but Kato needs a bitch slap. Just sayin’!

Well the power won’t be used this season.

Lolo and Ricky get on my dam nerves would love to see them on block together they would loose they’re shit they are running every nomination Tamar is dumb doing they’re dirty work.

i thought Tamar would be smart enough to get rid off a HUGE target, Lolo or Nat, instead she’s thinking ahead believing that she going to keep winning HOH/Veto. When reality smacks her in the face, its going to hit her really hard.

It’s quite funny Tom and Kato bitching about everything. i.e. The kind of conversations everyone ELSE is having. What else should they do. They’re both on the block. I get it.
It’s even harder when you were on top,,,and then…at the bottom. And so quickly.
It’s kind of The 2 grumpy old Men. Was that a movie?
If Ricki leaves soon..it’s all women.
So..it could very well be nat and Lolo final 2. Some of the comps will be luck and mental. Then it could be a toss up.
Personally..I’d like to see Lolo and Ricky gone. Soon.

LOOONg discussion between Tom and Kato outside (in the rain) 🙂
Kato is over Tom’s scenarios. I think if the 2 of them were left in the house…they would be over each other. Certainly Kato over Tom.
What I didn’t know is that Tom and kato knew each other before the show.
I think Kato will be the one voted out between the 2.
It was a moment earlier when Nat, Lolo and Tamar walked into the Kitchen area and found Dina, Kandi and Tomato going over days.
Tamar said to Dina in the BR..*That didn’t look good *
It’s going to be remembered by Tamar. For Sure.

im happy one of tomato is leaving. i dont care who. but! will also love for the one who stays
to win hoh and put lolo on the block!!!!!!

This is the worst group ,a bunch of spoiled cry baby’s and what’s with the sun glasses