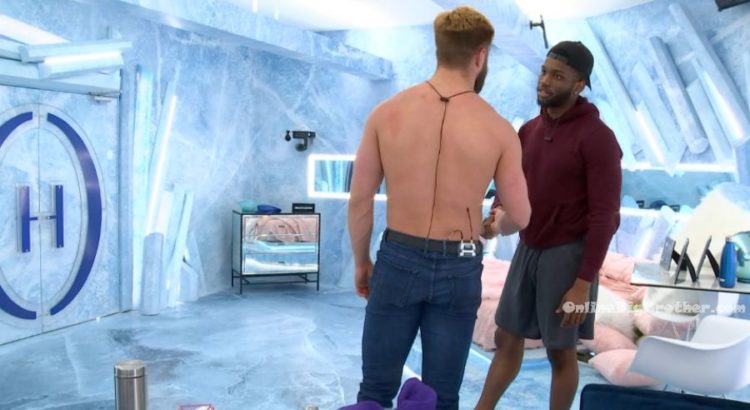 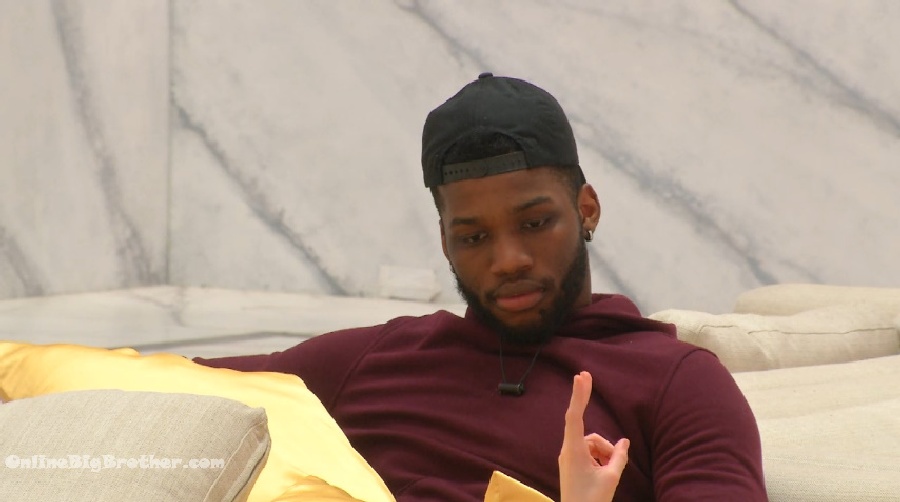 12:10am Sheldon and Brooke.
Brooke – I had a really good conversation with Maddy and Ria. We talked for like 45 minutes. Sheldon – what was the conversation? Brooke – They were like honestly we’re being super real with you .. we want to work with you and like only you guys till the end. And I was like noted. 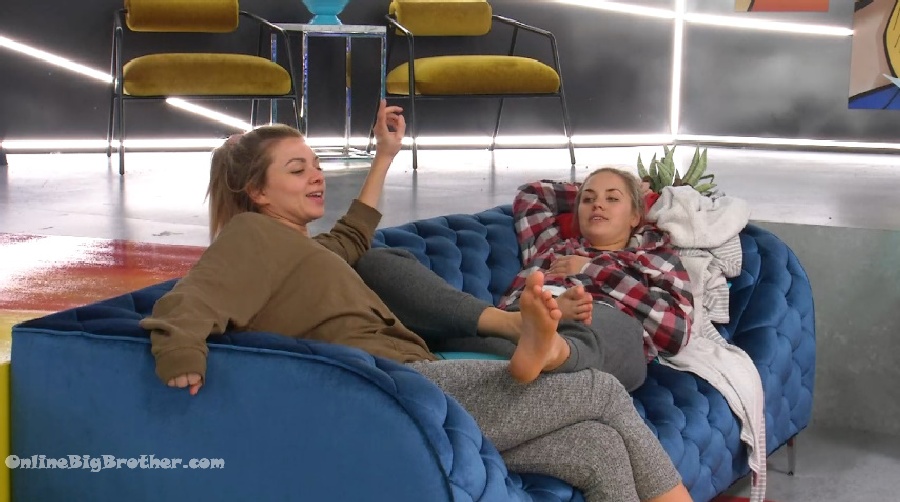 12:35am Upstairs. Chris joins Rianne and Maddy. Rianne – are you going to kiss Vanessa? Chris – guys I am probably not going to kiss Vanessa. Rianne and Maddy both scream – what?! Rianne – are you serious? Chris – like I like her.. Rianne – do you like Sue? Maddy – like if she didn’t have a boyfriend. Chris – well its her I have to worry about .. not me. Rianne – what do you mean? Chris – I’m just kidding. She’s alright. Rianne – why not Vanessa? Chris – she’s alright. Rianne – Are you more into Sue? Chris – She’s feistier. Maddy – Sue is feistier? Chris – a little bit more. Maddy – you like feisty? Chris – a little bit more. 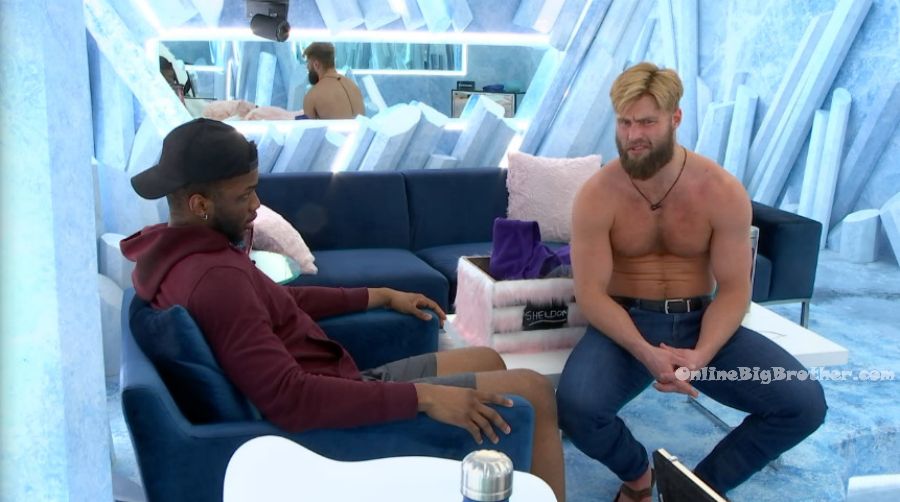 1:22am HOH room. Sheldon and Chris.
Chris – do you have things figured out? Sheldon – yeah, I just want your opinion. Chris – we have the same target right? Sheldon – yeah. Chris – Backdoor is the most efficient. Sheldon – yeah but who do you want as the other pawn? Who would we do? Chris – Carol. Sheldon – I am going to propose it in my talks tomorrow and there is a chance that someone is okay with it. And there is a chance .. its obviously the most efficient way to do it. Chris – we just have to convince them they are 100% safe and let them know.. Sheldon – that everyone is in on it. I’m sure someone will so I will let you know how all those conversations go in terms of people volunteering. I figure it will be late like tomorrow night. I think the five of us should update and talk ..cover bases of what everyone has heard. It should be easy though because the target is clear.
Chris – do you want to make the five official? Sheldon – what do you think? Do you think we should? Obviously you and I. Chris – these girls got us. They need us both. Sheldon – I agree. Chris – they trust us more than any other girls out there. Sheldon – and I think they’re good ears for around the house. They’re all on board. I trust them all. Do you trust them all? Chris – yeah. Sheldon – ok, we’ll make it official tomorrow and then I will update you guys with everything I am hearing. We did it again bro! Chris – yeah we could have competed just us four but I wanted to show you that I support you man. Sheldon – I appreciate it. Chris – I have faith in you and we’re rolling together. Sheldon – and we are rolling together 100%. Chris – f**king freight train! Sheldon – f**king freight train! Back to back to back to back! Rest of the way. They hug and shake hands. Sheldon – we’ve come a long way. Chris – even when Kyle was here I knew that long term it was going to be me and you because we can trust each other and we’re calm. Sheldon – and we’re not gigantic targets. Chris leaves and Brooke joins Sheldon. 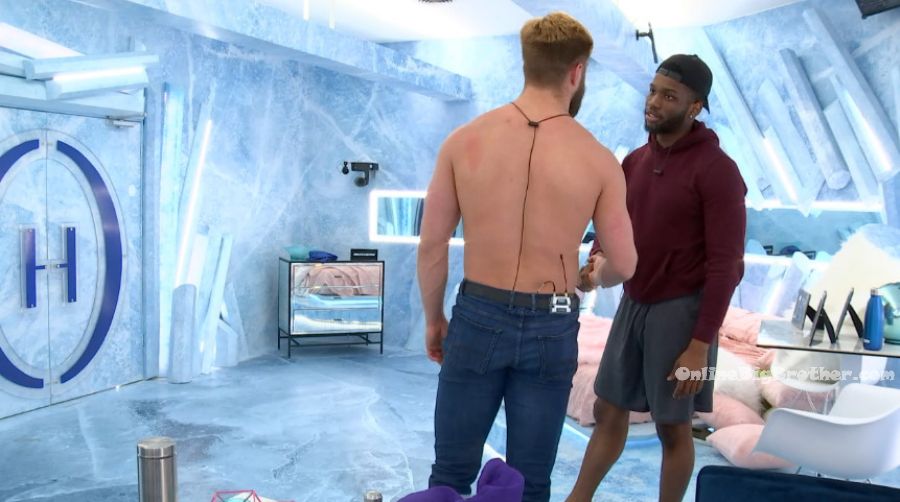 1:25am HOH room. Sheldon and Brooke.
Sheldon – we got interrupted but the two of those girls .. you feel good about it. Your mind and everything feel good about it? Brooke – everything felt good and if everything goes well this week, I genuinely think they want to work with us deep in the game. Sheldon – and how did they say it. Brooke – we were talking about personal stuff and then Maddy said that she was so happy when Sheldon won again. She was freaked out when Chris was up there again. Then they were just like we saw Sheldon’s character and really want to work with you. Sheldon – that is good. And just getting rid of men and socially castrating everyone from the rest of them. Brooke – I feel like we’re in a good spot. Sheldon – we still have the final 3.. me, you and James (The stuffed animal). Brooke – the only true alliance. Brooke – taking James to final two .. he is quite the smooth talker though so I am quite nervous for his final speech. Sheldon – yeah I know. He is going to blow us out of the water. Chris is having a hard time not having won that comp. He wants to backdoor Minh so badly. I said I would see if in my talks there are any potential volunteers to be a second pawn. And he said if not we will just forcefully put one up. And I am like Chris that is not how you play this game. Brooke – oh the bull. Sheldon – I would love for there to be two pawns. I guess we are pretty decent. Brooke – there are a lot of things that could go weird this week. There is only so much planning we can do and just need to keep it quite. Sheldon – what if tomorrow Carol doesn’t want to be a pawn? Because she has no option at this point. Like what if tomorrow is one of those days where she is like going for the 100k. Like I don’t want to be a pawn. Brooke – its a really good possibility but you would just have to put her up anyways. If you’re still on the block and Minh doesn’t go home over you.. 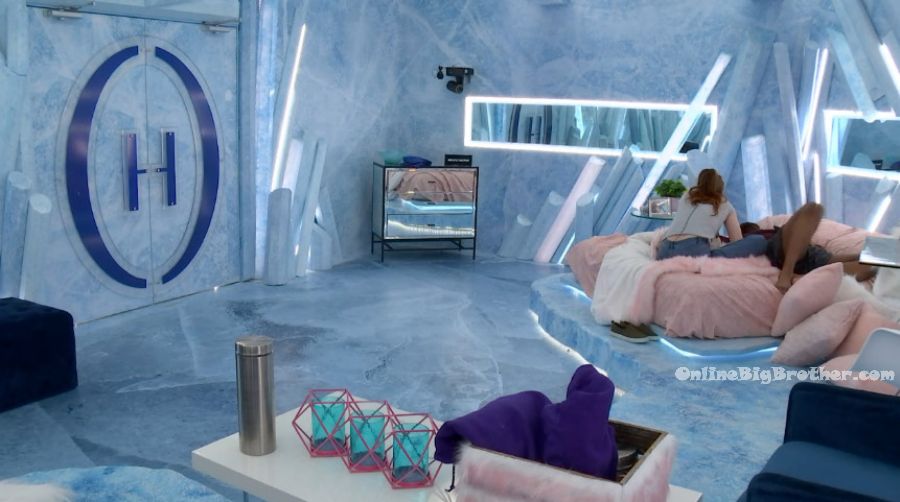 Maddy and Rian are gonna be in a five with Chris and Sheldon?? Really?
And thats it , they don’t trust Vanessa?

Frenchie
Reply to  Just a game

Just a game
Reply to  Frenchie

another name
Reply to  Frenchie

Isn’t it ridiculous at this point when they say the five, and we have to say “which one”?

This season has gone in the gutter. Of course Production let Sheldon win HOH again.

Just a game
Reply to  BBJam

Sheldon is prob the last thing production wanted.
A hoh for mihn ly would be the most exciting

Kind of unfair he “lost” his first HOH for no fault of his own.

another name
Reply to  hernanday oleary

Then he should have been given immunity for this week. Not a chance to continue play instead of restart.