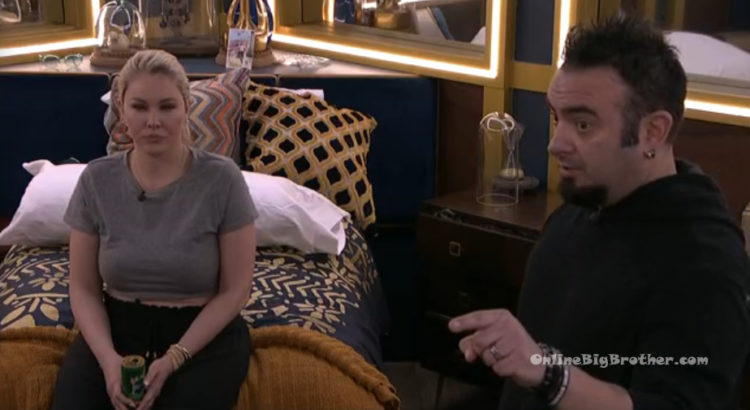 ** Chris Kattan has left the Big Brother house. “Chris’ situation will be addressed on Friday’s show,” a CBS spokesperson 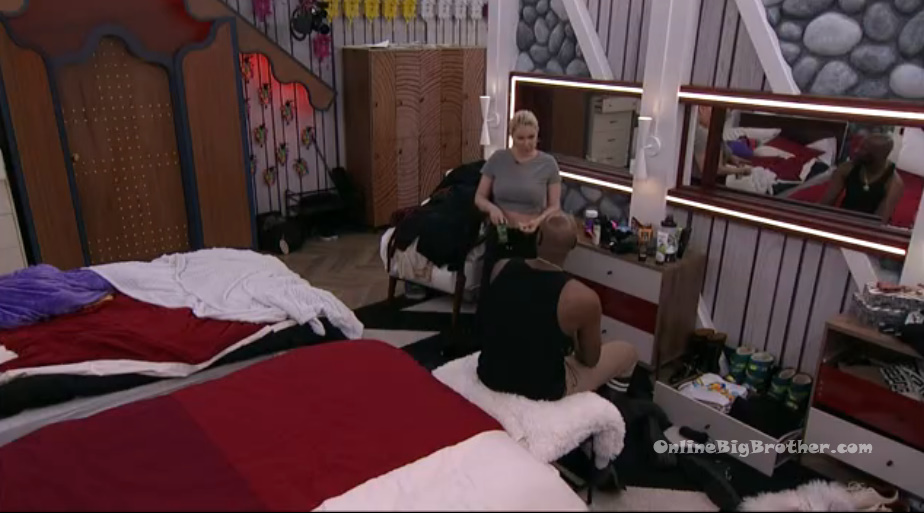 5:06pm The Live Feeds return from being blocked. Bedroom – Shanna and Lamar.
Shanna – I might save him. They think I might save Carson regardless. And they said that they were going to put up .. I think Todd. Lamar – so you want Cynthia to go? Shanna – no, I am not evicting Cynthia at all. It would be Todd. I would have to vote for Todd. Lamar – no but you have to pick one of them today? Shanna – no, Friday we evict. Lamar – one of the two vetos? Shanna – well evict someone. I can either take Cynthia off the block and she’ll put Todd up. And it will be Todd and Carson. Lamar – OOHHHHHHH! Shanna – or I can take Carson down and they would probably put Todd or Chris Kirkpatrick up. Or we need her .. so that is where it is going to get really tricky. I don’t want to .. I need you and Todd. If you can get Todd off Miesha’s jockstrap that would be great! Lamar – yeah I’m going to talk to him about that tonight. Shanna – because otherwise moving forward if Todd or Todrick win the HOH we’re f**king in trouble Lamar. Lamar – yeah. Shanna – you’re not, like they’ll keep you but I am. Like if I didn’t win this today, I was going on the block. Lamar – I still don’t really understand how the game works. Shanna – the first person I am saving would be Cynthia. But regardless of if I take Carson or Cynthia down she has to pick someone to put up and its going to be either you, Todd or Chris Kirkpatrick. That is all she has. How about you and Todd talk and then you guys tell me what you guys are comfortable with. Lamar – alright. Shanna – if you want me to keep Carson on the block and take Cynthia off the block. I am 100% okay with that. 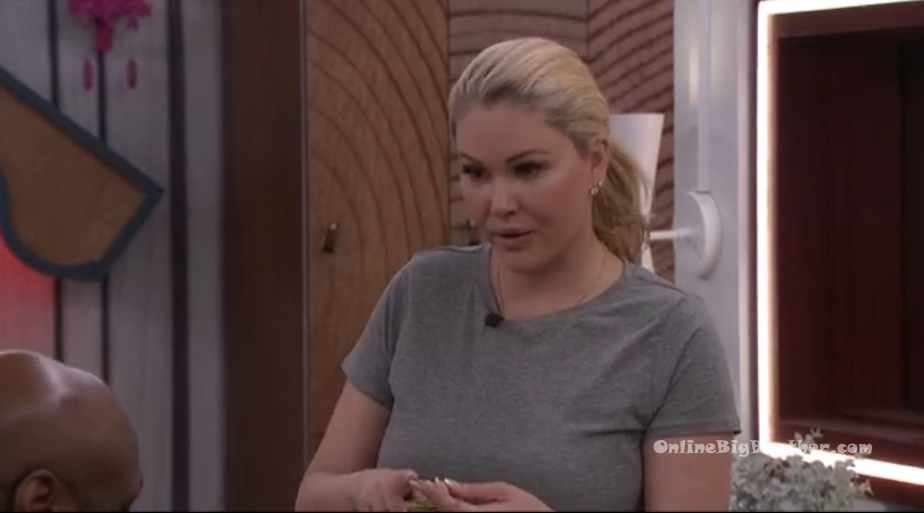 5:19pm Bedroom. Shanna, Chris Kirkpatrick and Carson.
Chris Kirk – you (Carson) and Cynthia are cool with each other right? Carson – absolutely. Chris Kirk – like you are a duo because she is talking to Todd and Lamar right now. Carson – no I trust her 100,000%! Shanna – I trust her 1000%. Chris Kirk – okay, listen they’re assuming she (Shanna) is going to pull you down. If she pulls you down, they’re going to put Todd up. I thought they would put me up. Carson – I did too. Chris Kirk – because that would assure that I went and they could just be saying that. And I could be going home but I am willing to take that chance for you guys. Carson – if you need insurance you can leave me and take down Cynthia. Chris Kirk – no! That is not an option. Carson – and force them to put someone up ..which could still be you though. Shanna – we want to take you down and have them put up Todd and then vote Todd out. Carson – I am down with that! Chris Kirk – and then we have to win the next HOH because they’re going to be gunning for us. Shanna – and I feel like Lamar will go with us. Lamar was like are you going to take down Cynthia and I was like yes I am taking down Cynthia but I was like you realize if I take someone down its either going to be you Todd or Chris Kirk. And I was like if I were you I would get Todd in check because he is basically like told me that he is a soldier for Miesha.. and he has a final two with her… and I was like and so I have like no problem voting him out Lamar because he has basically told me that he is indebted to her. Lamar said that he is going to talk to Todd. Carson leaves. Shanna – she (Miesha) was like hey if you want to take down Cynthia, I am totally cool with that. And I was like oh yes, I’ll do exactly what you want me to do. Chris Kirk – then maybe we do take down Cynthia. If Cynthia comes down then we still have the votes. Shanna – no, you guys are going to vote for Carson and like we need him here. Chris Kirk – No! I’m not! If you take down Cynthia, we will have my, you and Cynthia’s vote to take Todd out. They’ll have Todrick and Lamar’s .. you understand? Shanna – yeah. Chris Kirk – either way if one of them comes down and as long as one of us don’t go up we’ll be okay. It could blow up in our face and I could go home. But the way we are playing this game, I am willing to take that chance. Shanna – I will talk to her tonight and if she is cool with it. I will be like hey I just want to do whatever is best for the team. Chris Kirk – then we would know if I go up, then I would be going home or Carson is going home. 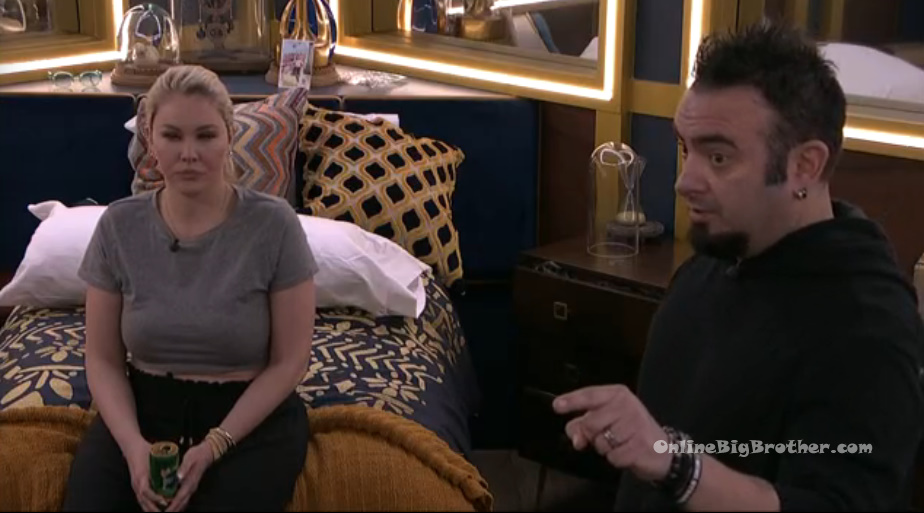 8:34pm HOH room. Miesha and Todrick.
Todrick – Cynthia almost wants to play Switzerland. And I was like are you playing this game or not!? Like if Carson is leaving, are you going to be someone’s ally or not?! And maybe its better to make a deal with Carson. Miesha – yeah. Todrick – Like you can’t just stay and cook and not participate in the game. That’s it and like no one know where you stand. 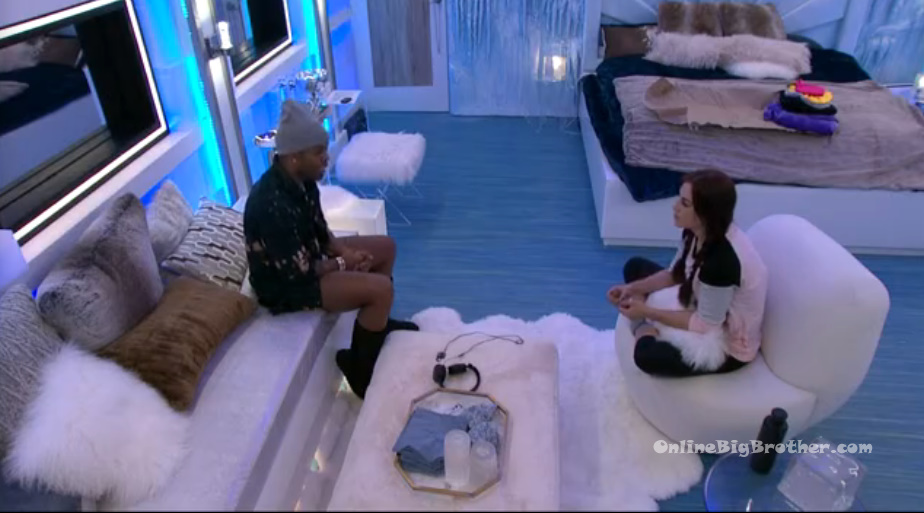 11:17pm Sauna room. Chris Kirk and Miesha.
Miesha – I tried to talk to you and we heard each other out… and we supported each other in the end. I feel like that is fair. Chris Kirk – that is fair. Miesha – right?! We had a conversation and we expressed how we feel and we decide how we’re going to move forward and we’ve played great I think so far together. Chris Kirk – how am I supposed to feel when he’s got a top two with you. And like I know Todrick is your top two. And now its like NO one is talking to me. What the freak am I supposed to do1? Like I don’t know if this next one is it. To me this is it. I am going to do what I can but to me this is it. Miesha – yeah. But that is because I really love you both. Chris Kirk – I get that. I know the pecking order. I know where I stand. He (Todrick) hasn’t looked at me. I’ve tried to include him in on something he will talk right here. But like this is a game. I was having fun… you know I am still kind of having fun. But who am I having fun with… so like throw me out. Get me out of here. If that’s the case, then fine! 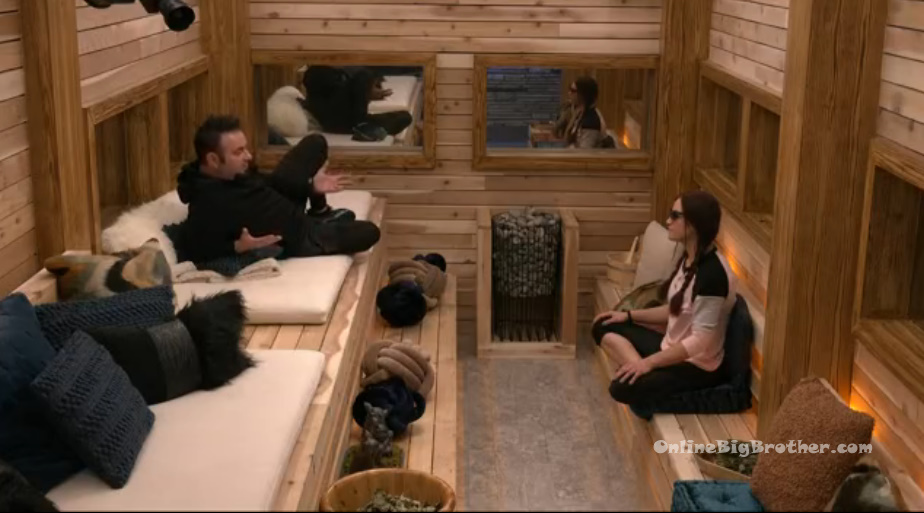 I think it’s because they’re “celebrities” that need to be instructed a lot about what’s happening or what they can or can’t do.