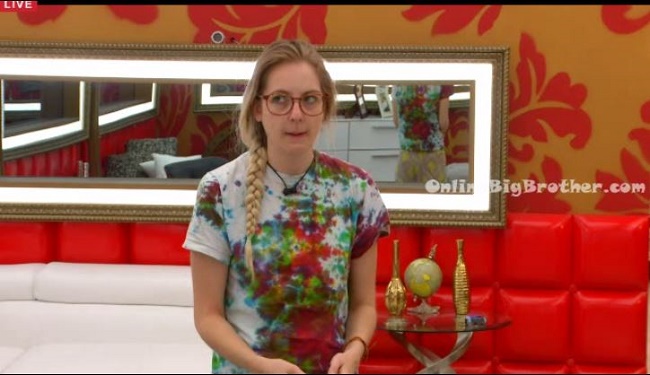 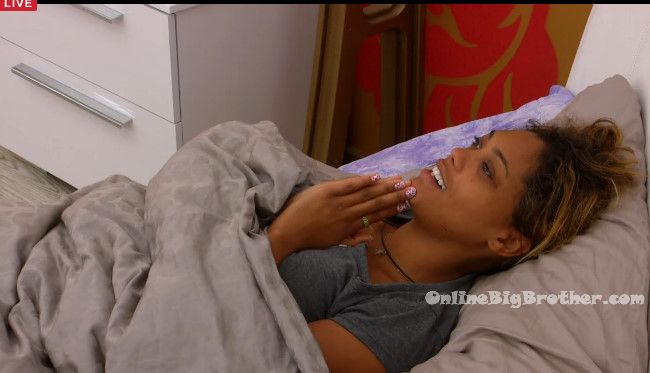 9:40am Big Brother wakes up the house guests. Sarah says you can’t be like I’m more at risk than you. And there’s lots of arguments I have. Like they put me up first and they didn’t put you up. They were going to send me home. I know it for 100% fact! They told me now basically. When it was me and Godfrey up. Britt asks they told you, you were going home? Sarah says yup, Godfrey knows it. I know it because I would ask Ashleigh like I said so if Godfrey doesn’t win the veto I’m good right? And she was like what? UMmm, yeah! Right because that’s who I want home. It was so obvious! So obvious.
Brittnee says its scary how not winning HOH makes you at risk next week. Sarah says yeah its scary. Britt says Its also scary how we have 5 days to get down to the final 2. Sarah says yeah that’s how Willow said it was. Sarah says maybe there’s an instant or something. There are 5 of us after today and then we still have to get down to the 4 for the final 3 part HOH. Sarah says he (Zach) is asking about the normal things like if he can get fast food and stuff. Last night Ashleigh was really happy… but I think it was because she was spending the last night with him. Sarah says I would not vote for someone who f**ked around with my emotion. Like just be real you’re sending me to jury. They head down stairs the make breakfast. They comment on how its weird they were told to gather all their stuff and head to the HOH room. Zach says he doesn’t think its weird. 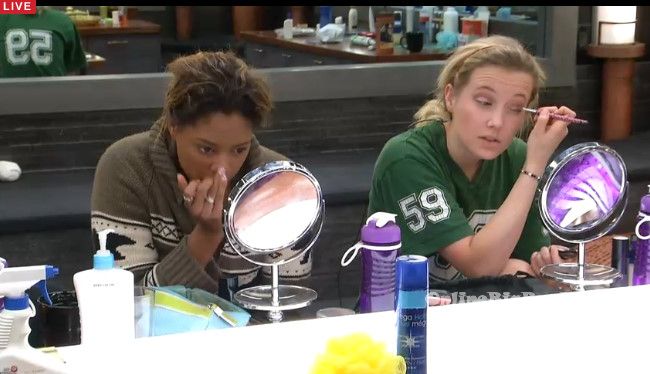 Britt asks Ash are you ready for today. She says yeah, ready as I’ll ever be. To think we outlasted super fans like Johnny and Naeha ..and a pro baseball player. Brittnee says I am just so proud of Calgary. Ash comments on how its amazing two of us lasted till now. Ash says well we know you’re well liked. Britt says so are you.

10:30am Big Brother blocks the feeds…

12:20pm The live feeds are still blocked and likely will be until after the double eviction episode. Tonight’s episode airs at a different time – 7pm ET/PT.

“Britt says Its also scary how we have 5 days to get down to the final 2. Sarah says yeah that’s how Willow said it was. Sarah says maybe there’s an instant or something. ”
“They comment on how its weird they were told to gather all their stuff and head to the HOH room. Zach says he doesn’t think its weird.”

These are the bright girls?

I think all the guests do pretend to they are entertaining to vote out someone (even though they have no intention), or they act like they don’t know whats going on (when they know exactly whats going down) to appease the production gods and to get more air time.

“oh big brother, you got me!” will get aired for sure…

a lot of the conversations last night were moderately interesting. my favorite comment that came out of one of their mouths was actually courtesy of Godfrey: “I wish we were allowed to put our own spin on the nomination script: to be honest I don’t like you, you need to go sit there” gee, scripted ceremony speeches. who knew. Considering the impact ceremony speeches have had on his role in the game, its a little like killing the golden goose, but okay.
i’m thinking about godfrey’s episode edit right now. he’s been portrayed as never having been member of an alliance (he was allied with Bruno, with Bruno and bobby, garb and the goblins, and with all of the guys at one point. he thought they were alliances). He’s been portrayed this week as never having been presented with or entertained Zach’s offer. it’s interesting. his episode edit portrayal is a fine portrait for f2.
does he deserve it from his game on the feeds. yeah. does he deserve it even more from his game on the episodes. yeah. for this reason I don’t expect godfrey to fall victim to the double eviction. it doesn’t fit the storyline i’m projecting into next week.

Batman
Reply to  another name

I hope he goes home, he deserves it more than any other! I can’t get over him throwing that veto when he was on the block. He seems like he has no fight in him. Just weaseling by, that’s my take!

another name
Reply to  Batman

my take on godfrey’s game plan:
go into the house acting like you don’t know how to play and behave somewhat erratically (trying to make multiple alliances week one) and openly so that you are determined to lack subtlety. play dead for a few weeks while listening to what people are saying and watching what they are doing. when in danger choose an imposing player to target, whether you actually intend to attack or not, so that the majority will keep you feeling secure that you have tunnel vision. throw everything you can throw to appear inept. keep telling people you’re all alone even if you have alliances and a final two just to make you appear even weaker. make side deals with each side that is left after they’ve picked each other off. It’s not a flashy game. except for the speeches that garnered him viewer support its a complete undercover game. His best argument if in f2: I yelled from the rooftops I was going to take out the player considered the biggest threat, and still you underestimated me and never voted me out when that player’s alliance had power for weeks. i’m in final two, you’re not. you shouldn’t have underestimated me. I had you all fooled.

Marie
Reply to  another name

I remember Godfrey saying to Bruno earlier in the game, “hey yo, I better get going we don’t want anyone to know I’m with you”. Meanwhile the super fan JP & Zack were “trying” to keep their alliance on the down low …. HA HA HA . They were spending all their time together in pantry and were up all night together. So I find it funny that JP thought no body was aware and offered himself up on the block to hide his and Zack’s alliance!!!! Duh, even Godfrey who was apparently napping knew this and call out Z during his HOH. It’s dumb stuff like this, I think that frustrates Sarah … love her BS scanner!!!

Lets see I like a little hypocracy in the morning. Sarah says don’t mess with my emotions. That exactly what GOS and her were doing with the little plan to convince Ash to vote out Pili to save Zack. Designed to rip Ash and Pili’s friendship apart. Pretty much the douche bag hypocracy crybaby Sarah gives us on a daily basis. She really is a vial creature.

Oh Please…. give it a rest already!
Thumbs Down.

Guy From Canada
Reply to  SuZQ

SuZQ
Reply to  Guy From Canada

Thanks Guy From Canada… I thumbs up-ed ya lol

I believe what Sarah was saying about the emotions had more to do with Zach and his emotions towards Asliegh being that they were supposed to be in a relationship. She wasn’t playing with Pili’s emotions because Asliegh would for damn sure evict Pili had she had the votes. Asliegh was deceiving Pili herself.

i truly can’t believe how many people like Sarah so much. She is a Whitney cry baby that believes her own lies that come out of her mouth. She was the one that start d the fight with Bruno. I would get up in her face too. Then again prob not cause she prob has such bad BO and who knows what’s in her hair. She is the true definition of a Dirty Girl.

It’s definitely been a disappointing time investment that for sure.

I kind of hope Pili goes during the double eviction. It would be cool to see the last 4 fight till the end :)

I prefer to see Ash follow Zach tonight…. then Godfrey

If Pili somehow manages to win this game…

Yikes… not what I want to see happen. I just figure she might as well continue to fill the void as a number to final 3… then she can leave as her purpose has been fulfilled.

I wonder if Pili has been playing us all since day one. She has made a few questionable comments, but I think she is a lot smarter than we give her credit for. Her name came up once at the beginning of the game, and then everyone forgot about her. The danger in allowing her to get to the final 2 is that she might actually win. She has very little blood on her hands and most of the jury likes her.

True, I wouldn’t want Pili to make it beyond final 3, also jury may like her but I question… would they vote her worthy of taking the win for what little game play she has shown. I personally don’t think they would.
I’ve wondered about her intelligence also but I won’t give credit for what I don’t see, especially being on this side of the feeds.

Why do ppl like Sarah.. she seems so fake.. doesn’t care about anyone but herself..

i think this house be full girls now!

The house has been full of girls all along!

that was sarcasm frodo….

if i’m looking at game play i’m not sure who I respect less: Ashleigh or pilar. Even when either does have a plan, or has a moment of enlightenment, they always defer to another player and happily follow the leader. in terms of contribution, being a plus one in the final two is bad math if i’m looking at game. i’d rather if the jury voted seagull.

Guy From Canada
Reply to  another name

If I was in that jury to cast a vote, I would snap my entry in two and toss it at the crowd.

SuZQ
Reply to  Guy From Canada

LMAO, I can so see that.

SuZQ
Reply to  another name

Team Seagull it is…. 100 G’s would certainly buy Seagull a lot of McFries

really hope there instant eviction with 2nd person gloing out!

I am hoping godfrey stays till final 3.

I was on the fence with that thought before I picked Pili for final 3, mostly because I think its a piss poor time for him (Godfrey) to kick it into gear for comps. I don’t think he deserves that chance as of now.

i hope it instant eviction on the 2nd person

I hope Britt wins. She has made big moves and deserves it.

so the show will start at 4pm PST thru live stream instead of the normal 6pm?

The results are in! Check out Hamsterwatch

At this point it’s Britnee that deserves to win and I really hope she does :)