Heather talking about her ex fiance . Neda says she’s not into being in a relationship. Heather also talks about wanting to be a model.
Sabrina rolls in to give them a ll a hug asks Neda how she’s doing. (Neda is on slop from the easter egg hunt earlier today)

Sabrina Sarcastically mentions Sarah was “Such a responsible mother” because at some point Sarah had mentioned her children’s names and the school they go to.

Heather talking about her rebellious youth, “I did a lot of really silly things.. I was a crazy teenager”. Says she feels bad for her parents having put them through so much stressed.

Heather says she really liked modelling but can only do print and catalog, She’s not tall enough to do international runway, “That killed me inside”
Heather says she started acting after modelling and fell in love with it. She adds that she just started her acting career before Big Brother Canada Started.

Adel – “I’m a boy version of my mother”
Says he’s been using attributes from both his parents and family to get through the time in the house.

Adel says he believes that Rachelle is going home this week and Sabrina next week. Says he’s got it all set especially if Jon wins the HOH.

Adel explains that super fans will vote for him but people playing emotionally will not. Adel thinks Arlie will help him in the jury house because as a super fan he’ll understand what Adel

6:53pm Adel and Jon Briefly chat about them going all the way to final 2 and winning Big Brother Canada.
Adel says you “Pi$$ off the wrong boys” in the house and you are f***. He’s implying if people in production do not like you or you’ve pissed them off for some reason it will affect you in the house. Adel’s ipod stopped working and he’s still waiting for another one. Jon had requested something and immediately it was done. (Cigars maybe..) 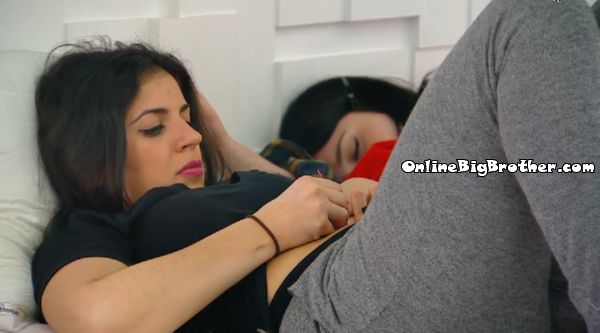 7:00pm Bedroom Sabrina and Rachelle
Sabrina saying how boring the house is because everyone is set on what they are going to do.

Rachelle – “It’s so boring like it’s so F*** boring we don’t do anything”
Sabrina – “It’s over for everyone they already know what’s happening their game is already figured out for now.. It’s boring for everyone no one has to talk game right now”

Feeds have been on HUsh Hush for the past 40 minutes

They got cigars and beer.

As much as i want Neda to Win Big Brother, the house is literally getting super boring! there is nothing surprising at all – I need a twist but i still want Neda to win haha
and wth happened to the Emmet and Jillian session? already happened or they not gonna do it anymore?

I found Emmet and Jillian so boring, I hope the session has SOME entertainment value… It would have been cooler if they brought Dan back again.

Emmett and Jillian are in town – at the Blue Jay’s game tonight.

A lot of people claim to hate her voice, but Heather would make a great voice actor. Yes, Heather, come to Vancouver, where I live!

She must have had some animation jobs, it is perfect for that because she can to at least 2 or 3 tones, it can be high pitched when she gets excited, but her normal voice is still a few octaves higher than normal people lol. which is why she is ideal for animation, and there can be a LOT of work with that for sure, but also there are a few film actresses with voices like her, over the years. They tend to stand out actually.

Yeah such as Melanie Griffith

Sabrina talking about them having the game all figured out.. didn’t SHE have the final 5 figured out in the first 5 minutes she was in the house? What did she think they were going to do when they got to final 5? Wasn’t it their plan to go all together as a group of 5 and than battle it out between them when they’re there? Now she doesn’t like those other 4 sticking together? It’s not as fun when you’re on the other side, Sabrina? Well suck it!!! I’m enjoying it!!

I love how Neda was saying that she imagined Slobby’s parents to be loud, annoying mafiosos, indirectly telling her just what we all think of her.

Well Neda fans another example of perfect Neda attacking people. I said it because it was and is true. Neda says Sab’s parents are in the mafia because of Sabby’s Italian heritage I guess? Neda is sub human waste of air IMO. Now lie some more about how she doesn’t trash people. And attacking an HGs family is repugnant and in this case displays a little bigotry as well. I’ve known several persons of Italian heritage and NONE were in the mafia!!!

Well were on character, Neda’s is vile, she reiterated she hates Heather but yet plays her friend in the house. She is one cold hearted fish! :P

Well she does say she has all these connections and can get into any club in major cities, been here there and everywhere. LOL (obviously lies) But, if we didn’t know they were lies, I would think that too! calm down!

You’re absolutely right Stan. Just because Slobby is a subhuman waste of my viewing time, doesn’t mean her family deserves to be derided so. I was wrong to get pleasure from her family’s mistreatment. Seeing Slobrina makes me a worser person I guess.

I luv that Jon called Sabrina out on her bullshit. Its amazing how she loves playing the victim. I cant wait till she she’s how whiny and payhetic she’s become and at the beginning of the game she was an ok player!

Wow, Slobrina fans coming out of the woodwork with the down votes, eh?

Production was hoping Allison would win HOH as she desperately needed a coaching session from jillian and Emmet. Once they found out Neda won and needs no coaching they canceled it.

i don’t think she got the Jemmett thing, even tho as POV holder she was supposedly getting that. was she excluded from the Alan Thick show airing? If so, maybe they did the Jemmet then instead, but if so she’d be a lot less touchy.

It happened when the feeds were down. Emmett posted on hiabfacebook page that it will air Wednesday or Thursday for sure. He will also be the guest on the sideshow this Thursday :)

If I gave to hear I am bored one more time from the gremlins, I am gonna reach in …Then stop being bored and do something. Invent a game or try to shake things up! (I want Sabrina to try and do that so they vote her out instead! ) She grates my nerve because she is a know it all, bossy pants and very self centered! I can’t believe Rach lets herself be treat her like she is her lap puppy. Actually scratch that cause they are cute and have purpose. Rach get a spine and play the game! Sab would try and crush Rach if she thought it was her leaving! I want them to catch Sabrina off guard and vote her out. Imagine her reaction? Now that would be must see Tv! Did you see her reaction during instant eviction? That was precious!

i don’t know why we’d be bored with the gremlins. They get up, R looks at herself in the mirror, they eat, they go to the hot tub and sit in the chairs, where Sabs eats some more, all bundled up even tho it is supposed to be kind of mild by now, and then they move back inside to shower, maybe, meanwhile R is still checking herself out in every mirror, they walk back to the house, bypassing all the games, pool, workout equipment, even the hammock, then repeat thru the day. Except for brief interludes of R checking herself in the mirror and/or doing the hair flip.

How will R keep herself company without those mirrors?

Am I the only Rachelle fan? LOL!

Probably. What is there to be a fan of? She has brought nothing to the show, no entertainment value (besides peeing in the hot tub), no strategy, no personality.

You forgot that Rachelle is constantly looking at herself in the mirrors. So annoying.

What is disappointing about Ro is that she shows glimmers of awareness within a situation and clams up. She just is to disinterested in the game.

You may be. I admit, she made a good first impression on me and I thought she could really be a player at the beginning of the season. What a disappointment.

The disappointment is not as much as with Allison.

Sorry typo.. I mean if I had to hear…
She just irritates the crap out of me. I wonder what she will be like without Rach! Fake I am sure!

If Heather wins the next HOH, then she might be smart and take John out.

I think that’s everyone’s backup plan if they can’t get Slobby out. Jon is public enemy number one once they hit final 4. the only one who might not put him up immediately is Neda.

Kellym I agree with you.

I hope Heather wins HOH, and ensures her safety with Adel. I am worried though that Neda might talk her into having a final 2 only with her and get Adel out.

We all know Neda is ruthless, but I hope Sabrina goes out next after Rachelle.

If Heather and Adel won HOH’s back to back, then they can get Sabrina and Jon out.

Heather will put up Adel

They seriously need to give these people activities. Not only is it boring for the viewers to watch people sitting around being bored, it also seems cruel to force the house guests to stay awake when there’s nothing to do. If I was in that house, I’d go stir crazy.

Lol, I think thats ones pretty obvious. Neda is holding her own.
Never was a fan of hers but I’m actually rooting for her now ((shocker))
Neda FTW!

Sabrina doesn’t just pick her nose but also her nails, bellybutton and eyelashes. Her hands can’t keep still. She really has a lot of bad habits.

some of the earlier episodes, they didn’t even bother to give her any air time, unless it was because she was in a comp, or it was the eviction show. she was just not there.

jon and adel are calling out sabrina this is good …

so fu**g over Adel. He needs to go home next week.

Adel is piece of shit for what he did to sabrina in the hot tub. leave her the fuck alone already jfc FUCK YOU ADEL!!

Jon initiated the blowup. Unfortunately Adel fell for it.

This show has gotten so boring it should end this week. What are they going to do for 3 more weeks, like seriously boring!!!!

Much of it is boring…tonight was not.