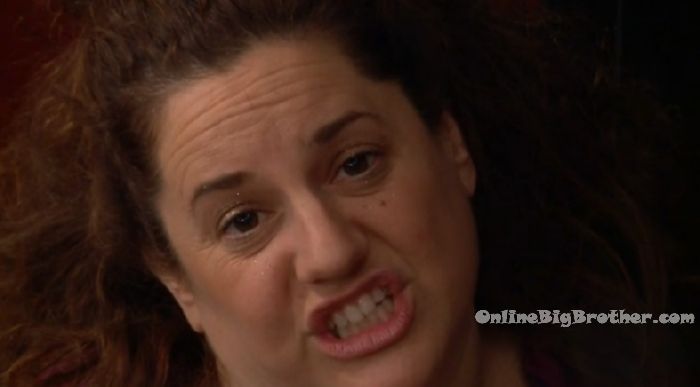 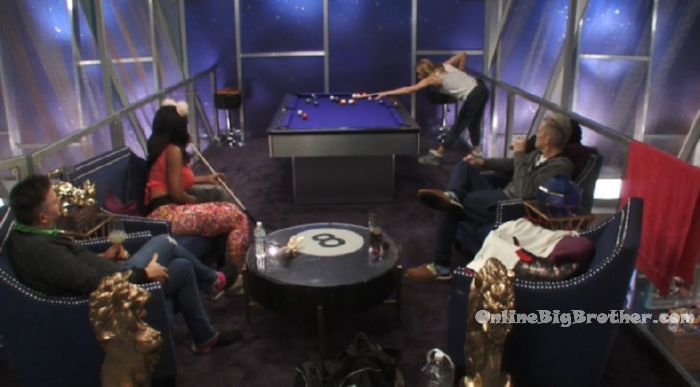 9:20pm Omarosa and Brandi are starting a pool tournament. Mark and Ross are watching and chatting with them. They talk about how before the cast was release Julie Chen tweeted out 11 different emoticons hints for each one of them. Brandi and palm tree, Mark a microphone, Metta a basketball, Chuck a karate kid, Marrisa was theater face, Shannon was a pie, Omarosa was a brief case, Ross was a talking head, James was a time clock, etc. 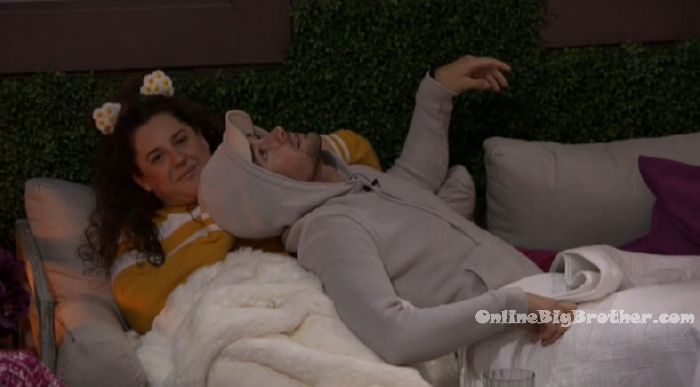 9:45pm Mark, Ross, Marissa, Brandi, Omarosa, Metta and James all head out into the backyard. They roast marshmallows and make s’mores over the fire pit. Marissa says that she has never smoked weed or anything else but that if it showed up in the house right now she would be “down”. 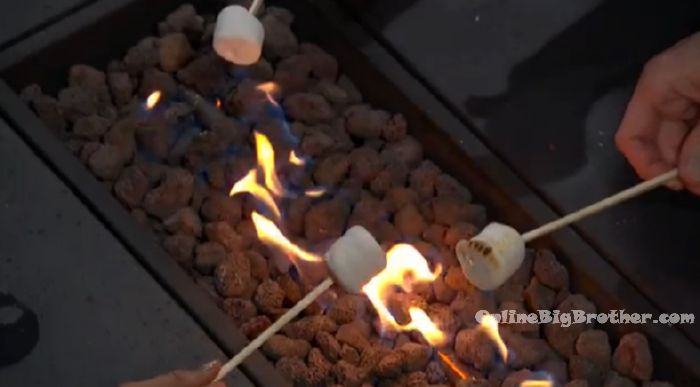 10:25pm Metta comes up with an orchestra game were when he points at them they each make a sound. Marissa then conducts them.

11:06pm Backyard. Metta talks about his wife Maya being from Vancouver Island. (Simon and Dawg live on Vancouver Island) Metta – its beautiful! Unreal! Omarosa – when you’re on Vancouver Island everyone knows you’re there, don’t they? Metta – not if I don’t announce it. Its a small city where she is from with like 50k people. A river in the back with all these pools. Natural pools. They get their water from the glacier. Its unbelievable. 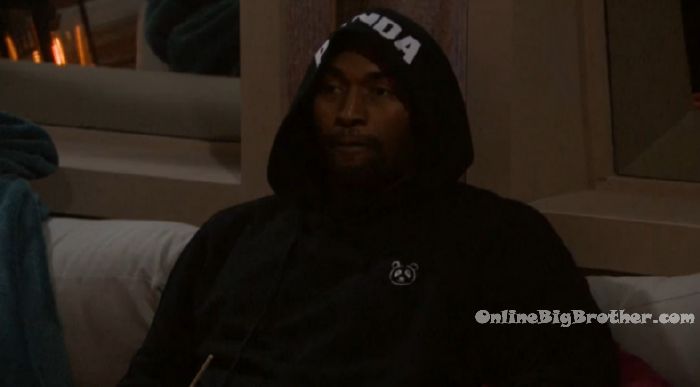 11:35pm HOH room. Omarosa and Ari. Omarosa – we have to figure something out. The house wants Brandi out. Ari – more than Ross? Omarosa – yes. Ross has the guys and he has Marissa. Then you’ll be by yourself. You’ve got to find a path. Think about it Ross already cut deals with everybody. Ari – who is saving Metta? I mean is Metta saving Ross or ? Omarosa – I don’t know where Metta is. Do you know where Metta is? Can you lock up Metta? Then me, you and Metta can work together? Its hard because he talks to.. Ari – I don’t think he will tell anybody. Omarosa – if Brandi goes who is your.. Ari – I am all by myself. Omarosa – You’re not by yourself.. HELLO?! I am somebody! Ari – no I know but I don’t have Ross, James, Marissa..
Omarosa – you have to try and get to Metta. You have to tell him no to leave. Like if he goes you have nobody! Ari – do you prefer Brandi to go home or Ross. Omarosa – it doesn’t matter, I don’t have any control with this twist. I have no control now. Its going to be up to America. Ari – Oh my god! Omarosa – Ari you can do it just talk to Metta. Ari – but they still have the votes. Omarosa – not necessarily. Think about it 2 people on the block, 1 person HOH, 4 people voting … that’s two / two. We don’t have a lot of options. And next week I can’t play in the HOH … I’m a sitting duck. 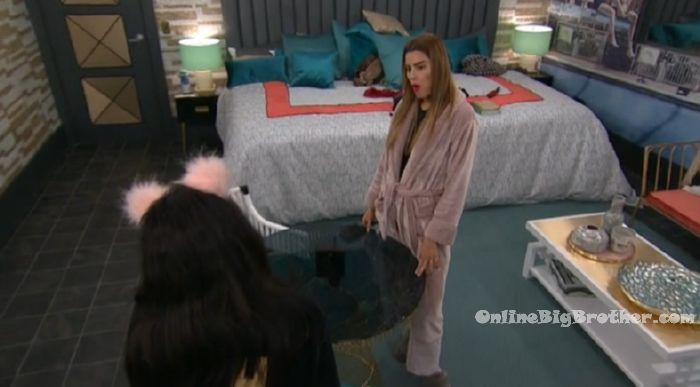 11:55pm Bedroom – Marissa and Ross. Marissa tells Ross that Omarosa told her to tell Ross that Brandi is the target and not him. She says then Omarosa told her not to tell Ross. Ross – you know what she is doing? Marissa – she is looking at the numbers knowing that Ross is not getting voted out. She told me not to tell you .. knowing that I would tell you. I mean she is GOODDD! Ross – we need to learn from her. Ross – she is betting at this than us. BRAVO! Well we will find out tomorrow. Marissa – its like we’re on a reality tv show with OMAROSA and she is playing all of us!

12:30am Kitchen – Marissa, Ross, Ari, Omarosa. Marissa – I think everyone knows that no matter the situation I am voting for Ross to stay. I don’t feel like I am betraying Brandi. I don’t feel like I am betraying you, Omarosa, the boys… everyone knows how I feel about this situation. If tomorrow that veto changes things up, then I would be happy. Ari – what if the twist is… Ross that both of the people come off? Omarosa – that would horrible.. that would mean I’ve pissed off half the house. Ross – its all going to be okay. …and in a week it will all be over and we can all go back to being friends. Ross heads to bed. 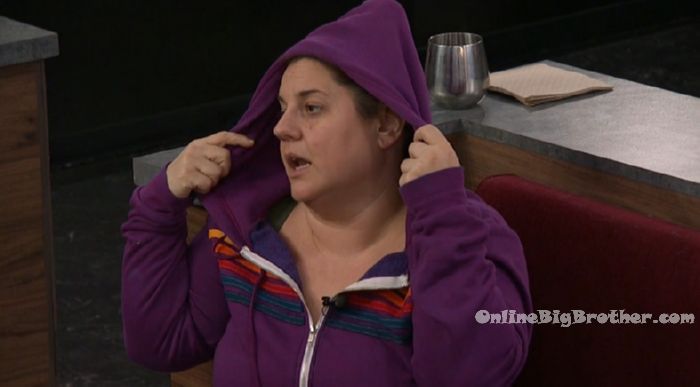 Vote Brandi out let her get back to her wine and Botox . It’s funny how quick James had her pegged

Ross or Marissa gots to go!! At least then we’ll have a week of complete chaos.

speaking of Botox, what is the golden yellow thing that Brandi puts under her eyes?

Wow… people downvoted a simple question? What’s wrong with you?

He must have watched her on RHBH, or was one of her boy toys back in the day….

They need to calll it Celebrity – not Obramosa Big Brother! She is a wannabe and no one can stand her!

If omorossa realy smart she will put marrisa instead brendi

Marissa’s 15 minutes are up

I’m kinda glad CBB is only 3 wks long. I can hardly stand another week of Marissa, let alone another 2 months! I somehow think this game is rigged for either Ross or Nomoreosa to win… or Metta.

Anonymous
Reply to  Marissa’s 15 minutes are up

She is driving me crazy, her manners are awful and she speaks over everyone.

Well, Marissa, this is why Shannon told you to GET RID OF Omarosa. Instead, everyone freaked out over the fact that Shannon is so good at Comps. Some Houseguests on BB get dumber the longer they stay in the game – some are already really dumb to begin with…soooooo….

How the heck did Omarosa figure out that “Ross has the boys & Marisa”?????

Just like to point out that the political operator, the lady who apparently held a high level post in the Clinton administration, worked for a powerful grassroots pro-Hillary outfit, then became a key Trump adviser…can’t even count votes. She thinks there’s 4 voters, but there’s five.

I’m just imagining her advising Trump to fight the Russia thing to the Supreme Court because he can get a 4-4 decision, then break the tie himself….

She may be trying to manipulate the situation with the confusion of votes. She is a sly cookie. Glad shes out of the white house. She is bright, but she is a flip flopper as well. Giving interviews defending Pres. Trump then all of a sudden he is bad. She didn’t find out anything she didn’t already know if whatever she insinuates is remotely true. Plus, I don’t believe a word she says. She is working to solely make a buck and using all the tools she has.
I personally luv’d her during the signing and how well she taught the cast & all of us. She should be a teacher and regain some self respect, becuz she is merely a reality ho just like brandi.

Trump in the news
Now here. Can’t get away from it.
Trump trump trump.

“She is working to solely make a buck and using all the tools she has.”
I work to make a buck too. Cause I’m not working for nothing.
I think they all there to make a buck. Big bucks!

why is there no diary room?

Min O'Paus
Reply to  me

Same reason there are no have nots and no one on slop. They are pampered spoiled celebrities who are so out of touch with reality that they dont realize all we want from them is to play pretend characters for our entertainment and otherwise keep their political opinions to themselves. Opinions are like assholes. Everyone has one and they all stink.

There are three peop l e on slop.

no name
Reply to  Min O'Paus

they are eating slop

You
Reply to  me

Uh, there is a diary room

I hope the twist is they have to vote out Marissa.

I like the maturity of the players this time. Having a bunch of kiddos in the house just to hook up is such a turn off to me. Playing the game and not alienating anyone because they are on the block is refreshing. Last summer was horrible to watch.

I hope Marissa goes on the block if there was a replacement nominee or the twist is Marissa going home this week hoping one of those two happen .

holy crap! this crew is in huge denial! they are lap dogs for Omarosa’s stories about the job she was fired from. She knows this – Brandi is a huge threat to Omarosa, this dunce cap crew deserve to be tortured for weeks at a time – they could have ditched Omarosa…but …noooo….they knew better!

of course you dunces are playing …Omarosa says…game..DUH!

I believe they all know Oma is full of herself & a liar ( her hubby must be so proud). They were all just so set on getting out Shannon thinking that Oma couldn’t win any comp that they had more time to get Oma later…ding ding ding ~ wrong! Anyway, maybe meddling production has put a twist that will allow the others to regain control whether Ross, James and / or even Metta. Then, everyone better focus on getting that self absorbed barracuda out. No worries about Brandi, she always ends up a loser and besides, she has to get onto her next reality show with her dad that is ashamed of her in Family Boot Camp Reality.

I think a good veto twist would be that Omarosa, Ross, Marissa and Brandi all leave the house. This season is a train wreck.

Marissa is a slob, licks her fingers then puts in communal food. she is gross!!! She talks over everyone and says NOTHING hope she leaves.

Omerosa is really a man. I saw her dancing on “Ellen” and the proof is in the pudding….

Really? How exciting – dumb celebrities begging to get evicted. Play Big Brother for god sake – that’s what you were paid to do. What a waste of time this game has been. Spoiled celebrities!! Ridiculous!