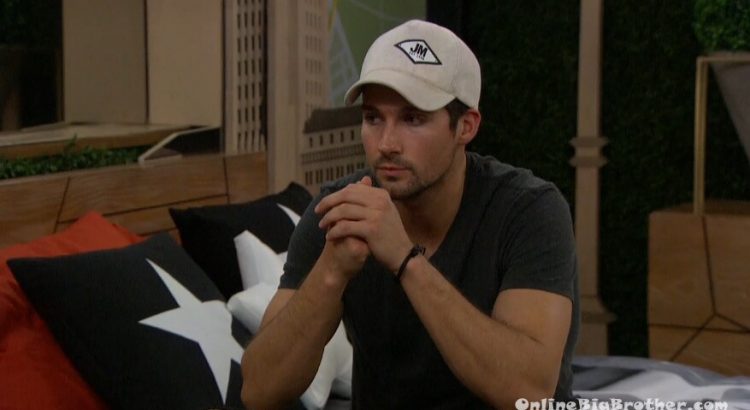 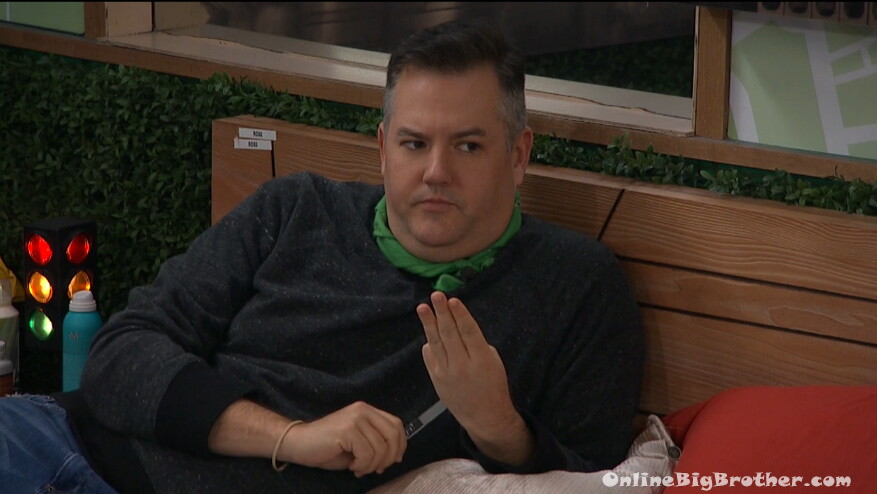 4:54pm James, Ross and Mark
James asks Ross if Marissa has any final deals that he knows of.
Ross – there was the one that you knew about.. but it looks like that has disintegrated because one of the four is going home.
Ross says he’s talked to Marissa a bit about the final 4 deal and she told him she’s down.
James- if us four work together we have the numbers we’re good
Ross – Say Brandi goes home.. It leaves. Ari, Metta, Omarossa

James – that’s the order..
James says it will be easy for him to put Ari up becuase she put him up
Mark – me too

James says nobody has honoured any of their deals in this game. This deal with Ross, Marissa has to be solid, “NO f** around”
Ross – I’m down.. 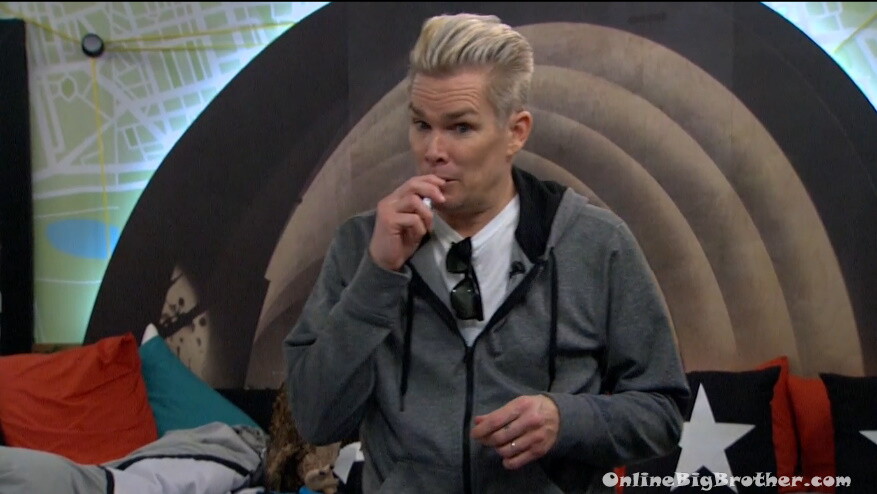 Mark – we can waltz into the finale..

Ross says he doesn’t have a final 2 with Marissa he doesn’t think he can beat her in the end because of all the girls in the jury.
James- the only way we have a fair chance is to be with a guy in the end 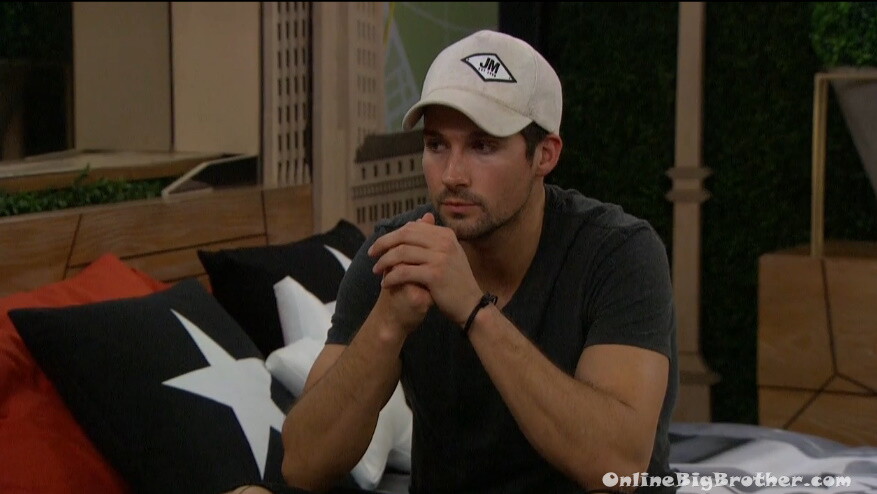 James – it makes sense that the three of us are the last three standing. (Ross, James, Mark)
Mark – gives everyone the best chance to win.
James – Marissa just wants to make it to final 4 she says it all the time.
Ross – you get the same number of TV days. 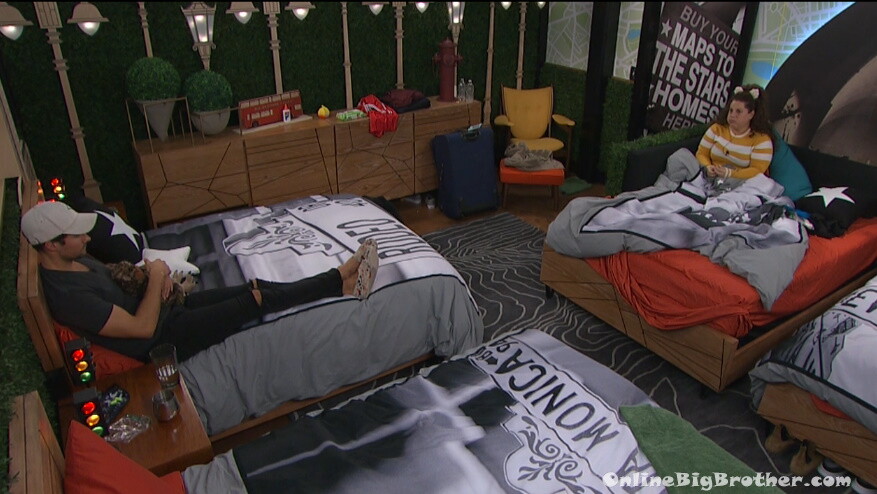 5:26pm Marissa and James
James says if Mark, her, Ross and himself are in something they can save Ross this week, “Guaranteed”
Marissa – I need to save Ross..
James wants to make sure that the people he’s working with to save Ross stay in this game and keep playing.
James – Ari has put me up and I don’t think anybody will beat Ari at the end.. the 4 of us have a far shot

Marissa says if she wins Power of Veto she’ll use it to take Ross off \
James – I would too
Marissa – I would be scared if there was some other plan.. no offense
James – you can’t give me a no offense if we agree to this..
MArissa – I mean no offense..
Marissa- I just have to sit on it for a second.
James- Why? That makes me think you are going to go tell Ari about it.
Marissa- I am not telling anybody anything honest on all my being.. 100% promise everybody and everything.. . It’s more about me figuring out if I’m ok with not working with Ari

Marissa – I would feel bad for her..
James – Brandi’s ruined both of those
Marissa – I know

James says If Ari makes it to the end she’s winning.
Marissa – I think the 4 of us are in the exact same boat (James, Mark, Ross, Marissa)
James tells Marissa she’s not screwing Ari over because Ari “isn’t playing the game”

James – she clung to Brandi she hasn’t made any decisions on her own..
James calls Ari a floater adds that she won the Head of Household by luck.

Marissa- I get it 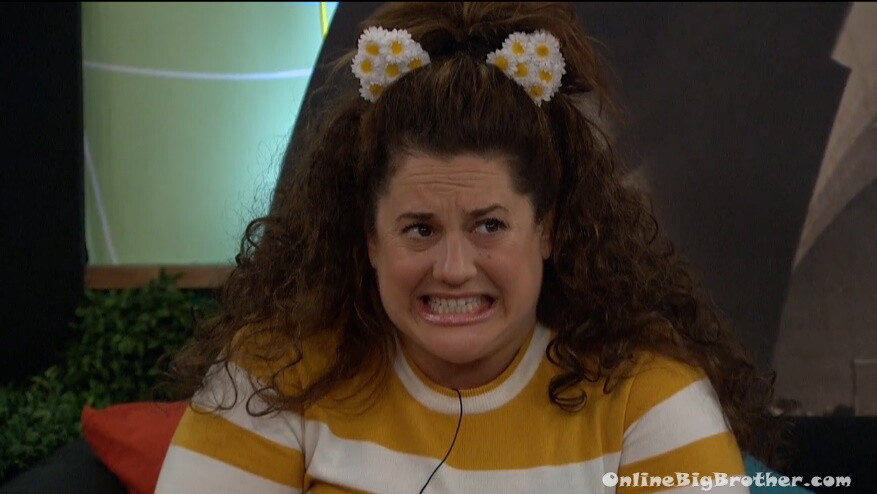 Marissa – I am going to have to say yes.. but then I’m not going to do it. That’s what I’ll do 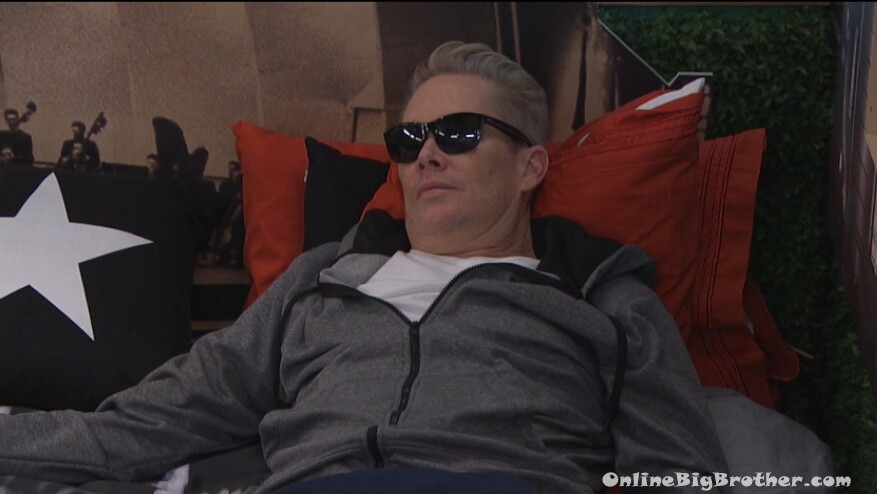 5:57pm James and Mark
James bringing up his conversation with Marissa to Mark.
James says Marissa is lucky she’s being asked to be part of “this” (their alliance)

Mark wants them to commit to the final 4 alliance so they can “ride to the finale peacefully”
Mark – we’re all friends..
James – we need to tell Ross that she hasn’t given a firm commitment and we need a firm commitment so he needs to talk to her
Mark – I agree.. or we’ll explore something else.
James adds how he told Marissa they need to know they have the numbers before they go save Ross.
Mark – just tell her we’ll either save Ari or Save Ross
Jame s- you mean Brandi or Ross
Mark – that too
They think neither of them will beat Marissa in the end so they plan to cut a final 3 deal with Ross. 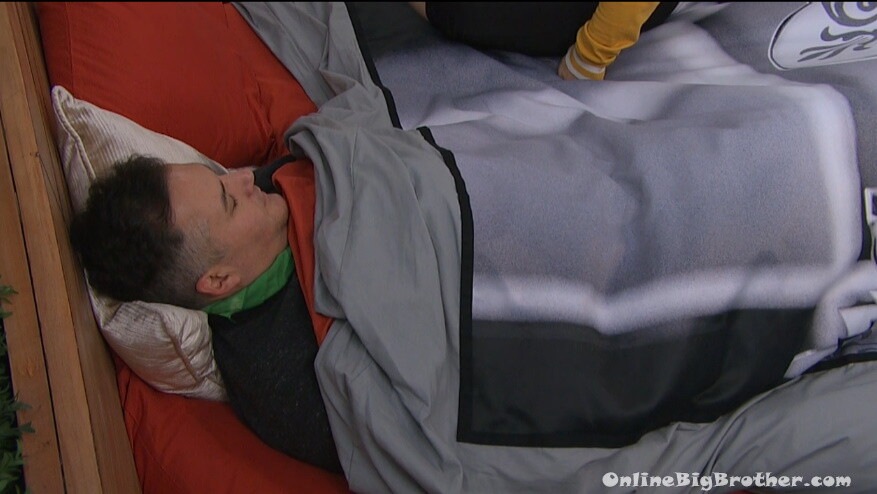 8:50pm ROss and MArissa
Ross says he’s having a tough time being cordial to Omarossa. He feels like if he’s nice to her he’ll come across fake
Agreeing they’ll say yes to James and Marks deal. Marissa says James and Mark will keep Ross around over her.
Marissa – they don’t need me
Ross poitns out that those boys made it clear they won’t help Ross unless MArissa is with them. 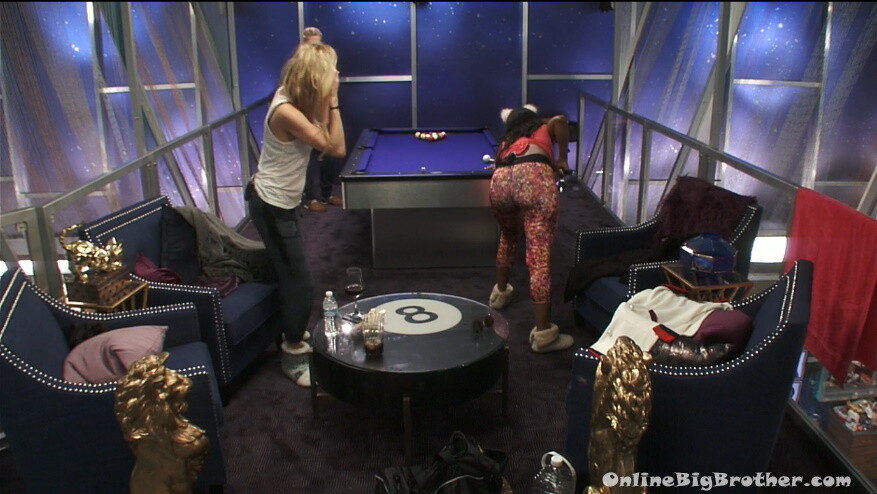 Ross. Omarosa, Brandi and Marissa all need to go. Sooner than later please.

James, James, James…..Looking to pull in Ross & Marisa will be your downfall.

Ross will agree to murder at this point & Marisa is velcro’d to Ari. I can’t stand Omarosa but she is your best bet at this point. She will pull in Metta & Mark will follow like a puppy dog. I figure Ross is toast as long as he doesn’t win the special veto. But I think this week has a couple of doubles coming up. Then you (or one of your crew) goes after Ari, then Brandi, then Marisa. As much as I can’t tolerate her, Omarosa is the best one to sit next to in the finals if you want to win. No one will vote for her.

I still think that this season is much better than the regular season because of the faster pace. They should do it all the time.

I want Ross to Win!!!! omarosa has lied and lied – take her down. Metta will go with whoever asks him – he isn’t interested and wants to go home. I like Ari but nor sure of Marissa – she tends to flip.