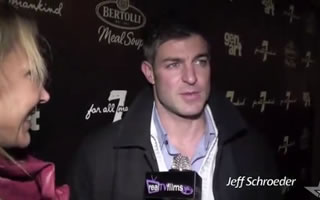 Earlier in the week we say images of Big Jeff posing down at the 2012 Sundance festival.

This interview emerged showing the BIG BROTHER allstar* at the 7 Fresh Faces in Film celebration on January the 19th. When i first say the video I thought “wow” he’s one of the fresh faces in film.. good for BIG JEFF, got to expect him on BIG BROTHER 14 for sure now.

Unfortunately he was not one of the 7 fresh faces on the “brink of stardom”, he was just there hanging out getting his name out. Still it was a good event to attend for a reality TV “superstar” whose trying to break out of the reality web show arena and into something different.

So what the heck was the event all about? from the Gen Art website

For the fifth year running, Gen Art is teaming up with 7 For All Mankind to recognize the best new actors and actresses on the brink of stardom with their 7 Fresh Faces in Film celebration. While guests sip on complimentary Ultimat Vodka cocktails, Stella Artois and Activate Water, the event will feature a special honoree presentation and all of the fun and excitement that has made Gen Art events legendary!

The fresh Faces were..

Alexia Rasmussen (The Comedy and California Solo)
Ari Graynor (For A Good Time, Call . . . and Celeste and Jesse Forever)
Christopher Abbott (Hello I Must Be Going)
Dreama Walker (Compliance)
Gina Rodriguez (Filly Brown)
Lizzy Caplan (Bachelorette and Save the Date)
Zachary Booth (Keep The Lights On)

*There’s been some debate whether or not to call Big Jeff a BIG BROTHER “All Star”. He never really came close to winning any of his reality shows; Big Brother 11, Big Brother 13 or The Amazing Race. What do you all think is Jeff a BB All star or is he the worst reality star ?

hey would you suck jeffs dick?

Simon…CAN YOU BANNED NAME FROM THIS SITE?
HERE IS WHAT NAME SAID:
HEY WOULD YOU SUCK DANIELE VAGINA? THERE WOMEN OUT THERE.

How about banning both?

Banning NOT A PHD Student & Name! I agree with that Squabble!!

Not a PHD student
Reply to  Name

Seeing how he didn’t say no to the question, it certainly doesn’t take a PH D student to see that his answer would be yes

NAME…..WHAT AN IDIOT? YOU ARE SO STUPID! NO WONDER YOUR BRAIN IS NOT WORKING!

Let me guess you like dudes too! I’m sure you are so weird. get some help!

Jeff is definitely an ALL STAR!!!!!

Come on, clearly hes an all star. He took out Danielle last year.