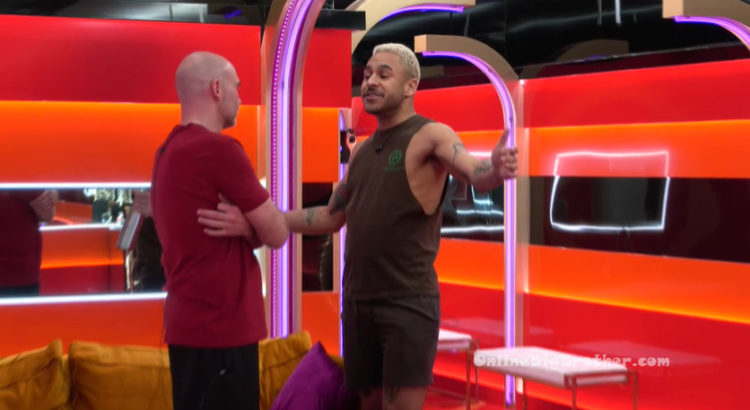 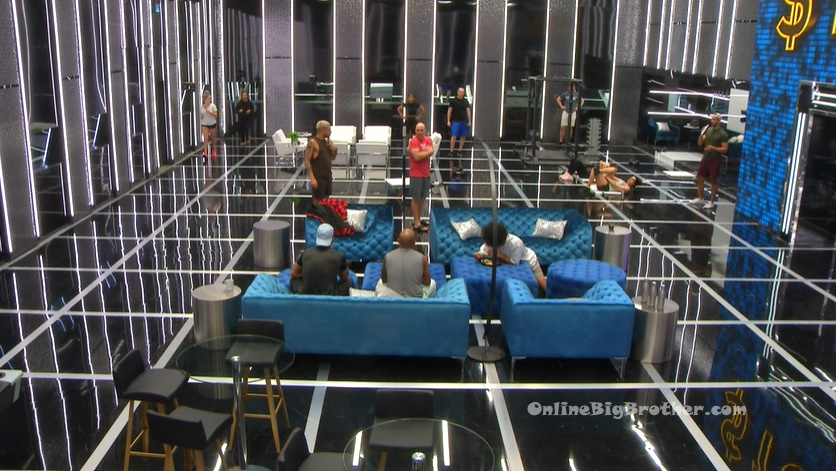 11:05am Backyard – Martin – hey guys can I get everyone’s attention? Whenever they said they were going to close the backyard in 4 hours … so like 3 hours from now.. if we can all gather in the living room. I just want to have a quick word with everybody. If that’s alright. Just 5 minutes. Its nothing official, just a quick thing I want to say. He says that he didn’t realize nominations were today. He thought he had a full day to talk to everyone. 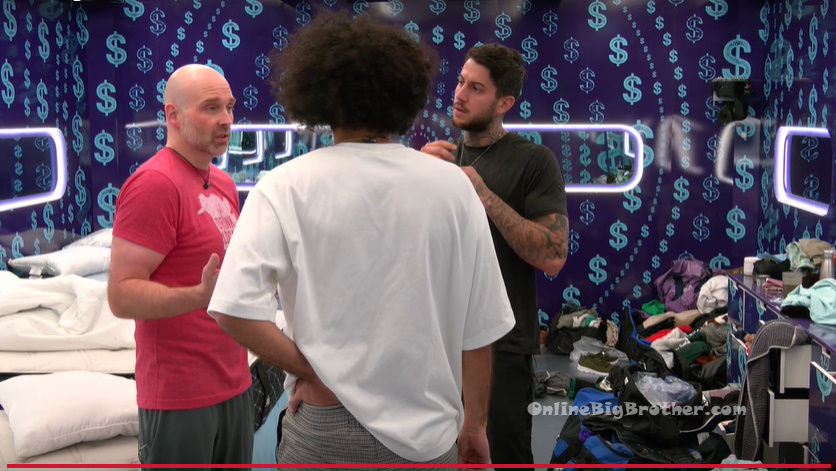 11:23am Bedroom – Martin, Moose and Steven.
Martin – obviously us four are safe no matter what. I already know what I am going to do, I am going to put up Jacey-Lynne and Jay. The reason why is because especially Jay I tried to talk to game with him and he never talked back. And I had a feeling that if he had it, I would have been up. And Jacey, I love Jacey and I’ve had a few talks with her but .. I know she is a big target and she is going to stay a target. She is going to stay a shield for us but like to be honest I never worked anything out with her and I don’t think she would put me up. To be honest if she gets it I don’t think I would go up. Moose – I hope its not endurance .. like we just did a work out and that’s the thing with noms you never know what the challenge is going to be. Martin – but are you guys good with that? Moose – yeah, yeah I’m good with that. Moose – I’ve been throwing the scent off… just because people are like they’re French, they stick together. So I want to remove one of us from the equation because like I’ve told multiple people like that I am scared that you’re HOH. Steven – who is your real target? Like who do you want out? Martin – Jay. That’s the one that scares me. I tried to talk to him and I just get a bad vibe. I love the guy and its nothing personal. Its just if he got it he might put me up. And Jacey its not as deep. 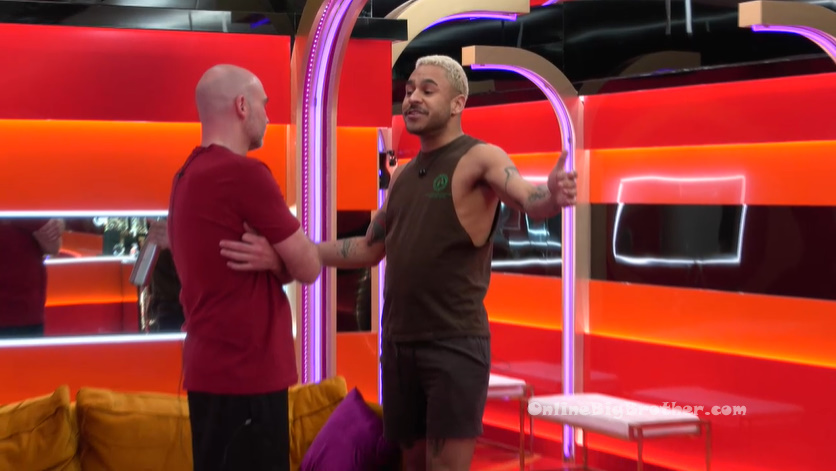 1:20pm HOH room – Martin and Jay.
Jay – all I want to say is that I want to stay until Jury and I hope you’ve had good conversations this last week and I don’t know where your head is at. You’re not my target at all. I don’t know what you’re thinking. I’ll be straight up with you and I hope you can be with me. Martin – that’s what I was planning on doing. To be honest Jay, we had one conversation me, you and Betty .. and for me this was an olive branch and I honestly tried to hang around you.. and that you would reach out to me. I had a lot of conversations with everybody. I love you as a guy and this is not personal.. its just game. Jay – are you putting me up? Martin – yes. Jay – do you know who you’re putting me up with? Is it Jessica? Martin – no…. I will just leave it as that for now. But at least I am giving you the chance to win the veto. And look if you win the veto and take yourself off and next week if you win and you’re like you put me up so I am putting you up .. I will respect that. I offered you an olive branch. Jay – I thought that conversation with me, you and Betty was.. Martin – I wanted to solidify that after and I did that with other people and I didn’t get that ..because I think you would be good in this game and that is why I was doing this. Jay – the last thing I would want to say to try and change your mind.. I came here to make it to jury and if I go home I go home to no job. If I go home this week I am f**ked! And I know that is life.. Martin – that is everyone. Everyone come in to get to jury and I need money as well. Jay – Its not the money ..I need the per diem every day. Martin – I calculate every day how much I am earning. Jay – thank you for not backdooring me. Martin – that’s what I mean you still have the veto. Jay – that’s good that you see me as a threat. I told you that Stef and Summer were the people I was looking at and you weren’t even on my radar. Martin – its just talking with everyone and last night I don’t know if you heard me but Stef I made a deal with her. So I respected that. Its not personal and the thing that you did at the ceremony I respect that. Its not personal. Sorry man. They hug. 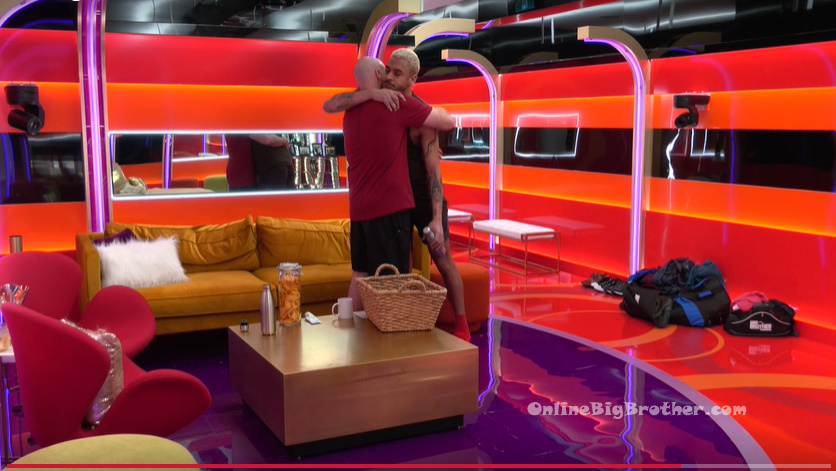 Grab ‘‘em by the Poutine

I think you mean Gino, not Steven. I don’t think there is a Steven in the house.?

Dawg
Reply to  Grab ‘‘em by the Poutine

so did they cut the feeds for that house meeting?

another name
Reply to  ddd

I think the house meeting was quashed when Production told Marty that due to fire regs. he can’t have door stoppers for the HOH room door to keep it open.

Gino / Marty talk. Bits and pieces. Sorry, I was distracted so didn’t get all of it.
the four to Gino is actually 3 and Kyle. So this would be the Marty with Gino Moose Kyle. That’s the only place Marty shows up in an alliance. Moose might prioritize this four or the young guys 4 over the savage seven. Gino… maybe, but Gino’s in all five of the big groups i’ve been tracking, so who knows what his ACTUAL priority is.
(ed. it seems many guys have figured out Moose thinks he’s puppetmaster/masterminding for the cameras, but don’t mind because he’s on their side.)
if there is a renom: Marty tells Gino it will be Kevin. Marty already told this to Kevin.
Marty made one week safety deals with half of the houseguests before the HOH comp.
His targets are the people that he didn’t make deals with?

The problem with Jess: she’s a social etiquette wrecking ball and doesn’t know it. While she’s trying to game, she’s also throwing factoids at people like grenades while interrupting them.
The problem with Jace? Girl has ZERO game, and darn well BETTER hope a showmance sticks.
The problem with Steph? If she ISN’T acting, she should be tested for brain activity. Put her up to your ear and you’ll hear the ocean. She learned oceans exist last week. Sue her school board. Preschool and up. Gotta be an act because otherwise…. wooooooow.
The problem with Summer? I’m getting TURNIP. Season five woman. Constantly saying she was going to Turnip? Never actually did? Yeah. That’s my current fear.
Jay? He’s gone to just about every member of the seven to suggest working together next week. How you going to walk into week two in zero alliances? oi.

The problem with Olive Branches this season? Olive branch doesn’t mean whip them into submission with said branch. Lots and lots of aggressive peacemaking going on with that poor branch.

… so.
are some of these people on glue?
Marty has his one on one with Steph. He’s told every other one on one that he wanted to target Steph, but made that darned deal that he’s going to honor because he wants to be honest for the first half of the game (he said it). During his meeting with Steph he tells her he’s working with some people, so maybe he can keep her safe with them too if she doesn’t come after him. He’s about to name names (no, he was. really) when she interrupted him. Then he names a name and says he isn’t final 2 with Summer, but they are 100% watching each other’s backs. He tells everyone his renom will be Kevin so if they win veto, don’t use it. If nobody is working with Kevin… what incentive is threatening to renom Kevin????
He Named Names to the house when he has no intention of nominating his big target. He named names TO his big target, and let her know he’s working with a bunch of people.
75% of everything he’s saying in his one on ones is bb101 stuff you don’t ever say on week 2, if ever.
Moose. lots of wtf coming out of him today. He asks Marty when they are going to get rid of Tynesha after Marty just did Wendy’s with… Tynesha. He tells Haleena she can stay for another week, and they can watch each other’s backs and target each others allies that need to be evicted…. and she better get herself an alliance unless she’s content to be a floater. Looks to left, looks to right…. so THIS is what passes for mastermind???? Oh look, he just inferred to Betty that he’s in a big alliance, back pedaled and said there are people he trusts. Oh ya.