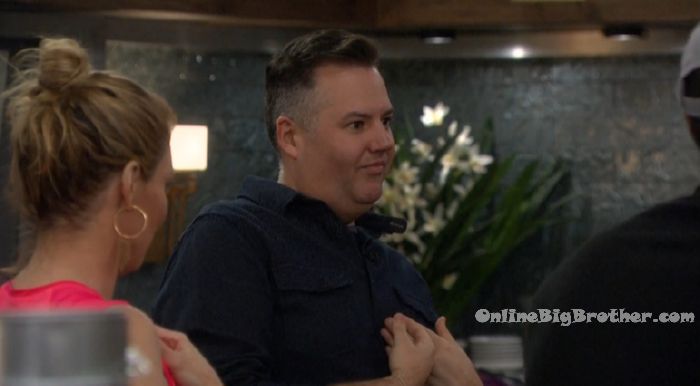 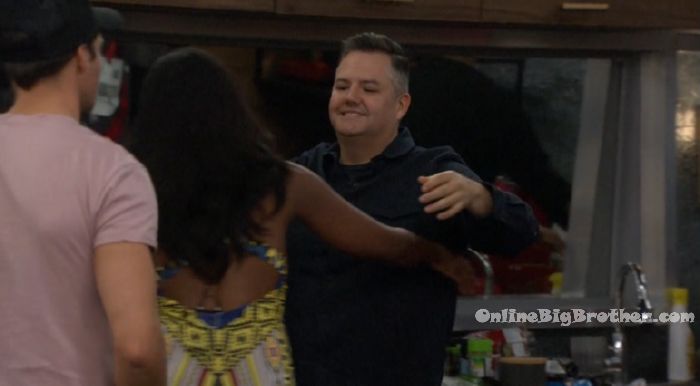 5:20pm – 6:30pm Big Brother blocks the feeds for the nomination ceremony. When the feeds return – Ross hugs Omarosa and says its all good babe. I don’t know what final 4 you’re talking about. I didn’t have a final four with the whole house. Omarosa – well not the whole house, that’s a bit dramatic. Ross – I talked to them and I talked to them. Omarosa – that’s half the house. Ross – I didn’t have final fours with half the house. Omarosa – not with Shannon? Not with James? Not with Marissa? Not with Metta. Ross – I didn’t have a deal with Metta. Metta – we didn’t have any deals. Omarosa – so you didn’t make deal with anyone? Ross – of course I made deals, not with half the house though, no. But you can say whatever you want though honey. Omarosa – I just want to split the pairs. Ross – that makes sense. That I understand.

8:07pm Bedroom – Ari & Marissa. Ari – we need to talk to Omarosa and find out who she wants out. What did she say to Brandi? Marissa – how can I trust you. You betrayed your team and your closest ally. And then she said you guys are in a final four. Brandi – you just sat quietly. You, me and Ross just sat there quietly. Ari – when is the show over? Marissa – 6 days on Monday. Its all fine. Ari – if we go, its okay. There is something mean about … I always tell you guys that Mark is untrustworthy. Marissa – Mark is going to be in the end. Metta is going to be in the end. Metta, Mark and James. Ari – I don’t think Metta will win. Marissa – Metta won’t win because he won’t get to the final 2, no one will take him. Marissa explains how the final HOH works. 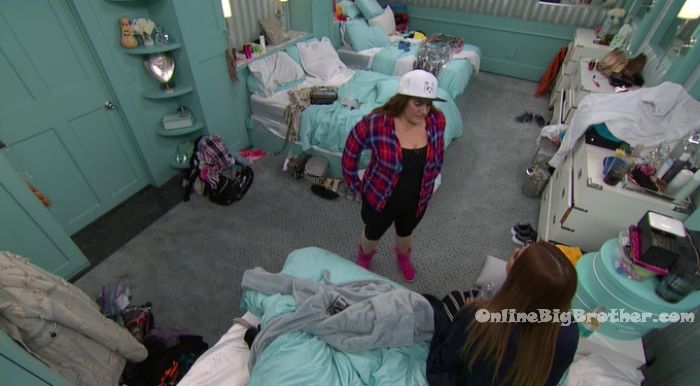 8:30pm Storage room. Ross and Marissa. Marissa – Ari is the smartest person in the house. Ross – okay. Marissa – She goes Mark and James made a deal with Omarosa. Think about it. Mark went up there and and came down and was like she is putting me on the block. No, he went up there and they made a deal. Lets break those four up. Ross – if that’s the case then, they agreed to vote me out. Marrisa – they were up there for so long. Ross – how long. Marissa – we ate lunch. Ross – was James up there? Marrissa – no it was just Mark. Ross – James and Mark would not trust Omaroasa. James doesn’t need to make a deal with her. He is safe this week. I can grill Mark. I can tell if Mark is lying to me. 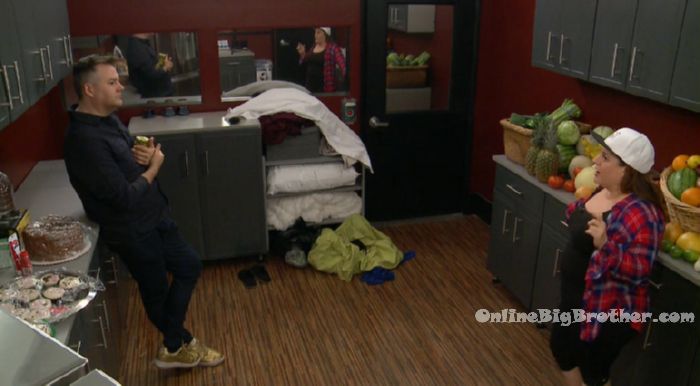 10:40pm Big Brother gives the house the house guests Margaritas and Mugs from POP tv. They all head out into the backyard and think up questions to ask each other from fake viewers. 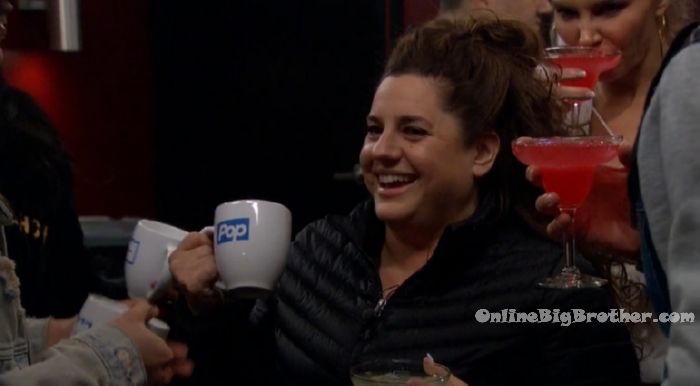 11:10pm – 11:50pm Backyard. Mark, James, Metta, Omarosa. James – my favorite part of the evening is when Brandi gets too cold to hang out. Omarosa – I’ve watched her go after the two of you all. And I’ve heard just in passing all the names and comments that she says about me. Mark – little snips, it gets tiresome. Its kind of sad. James – in any other situation in the world I would just give it back. Mark – oh I would obliterate her. James – but in here it will in no way benefit me or the game. She is such a bully and the last think you want to do is empower them to keep going. So I just say nice things. Metta – that is crazy. I haven’t noticed that. James – I just hope she finds away to be happy. Mark – I think its her thing.

Let me get this right….with the house having couples in the 4 person multi alliances Omarosa decided to target a single from two different couples leaving Ari (who has won and HOH) and Marissa (who has won a POV) in the house plus whoever else is left instead of targeting one couple and only leaving one enemy in the house…..wow, a super fan from only watching the show……

BRING IN THE MASTER SNAKE
Reply to  Guy From Canada

SEND IN PAUL THE MASTER SNAKE OF ALL TIME. ITS THE ONLY WAY TO SAVE THIS SEASON FROM TOTAL BOREDOM. LET HIM SHOW OMANOITALL SHE RUNS NOTHING. COME ON BB BRING IN THE MASTER TWIST OF ALL TIME TO CLEAN UP THIS TOTAL FLOP OF A SEASON.

SMG HOOVER
Reply to  BRING IN THE MASTER SNAKE

Um… how about no.

Jim D
Reply to  BRING IN THE MASTER SNAKE

I agree that it is a flop of a season but I think the world has seen more than enough of Paul. It might be interesting to pit him against Omarosa, but give the Big Brother world a break. Someone who would really annoy Omaroasa would be Vanessa with her constant whining.

F Paul
Reply to  BRING IN THE MASTER SNAKE

Paul was a bully and one of the worst to ever play this game. Hence why he lost twice.

sunshine
Reply to  Guy From Canada

She took one person from each of the two power couples which means one of them will be broken up. If they get Veto then she puts up Marissa or Ari as a replacement. I think she really wants Ross to go but either way one of the couples will cease. I think it was a great move and one I anticipated her making. She hates Brandi so maybe that’s more personal whereas Ari is the stronger player but putting Ross up was a given.

HOGAROSA
Reply to  Guy From Canada

why his hogarosa eating all the slop?? doesn’t she have enough elsewhere or does the pig miss her usual meal. oink

I hope Ross gets his just desserts

Thanks guys for the update. I wouldn’t know half of what goes on without this site. Now that Shannon is gone I find it hard to root for anyone left, but will find it entertaining to watch them go after each other.

Thank gosh Ross and Brandi got nominated ….Marissa for the love of god please shut up she won’t stop talking and please stop having the camera on Her for basically a Hour on AD talking about nothing .

Dear Ross, you have final four deals with Ari, Marissa, Brandy and James that’s more than half the house since there are only 8 people left!

I don’t like Brandi….didnt like her on the Real Housewives either…..dont know why. She just gives off this vibe of being superior than everyone else. It also didnt go unnoticed as well that on Fridays show everyone had family send messages but she didnt? No kids left messages….no boyfriend etc. She had to have Andy Cohen give her a greeting. To each his own I guess

She mentioned on feeds that her ex would not sign off on having her kids on tv so they were not permitted to leave a message for her..

I think Brandi has been banned from having her kids on tv, it wasn’t allowed by her ex husband when she was on Real Housewives of Beverly Hills and I think that is why we saw no message from them.

she doesn’t want her boys in the public eye. she told the hgs it was her ex that wouldn’t allow it, but it’s her. she protects their privacy at all costs. the only photos we’ve ever seen of them were posted by her ex.

Ya, why didn’t Kim Richards or Yolonda Hadid leave a message? They are besties, ya know. Lol

I had watched celebrity apprentice when Omarosa was on it and she had “cheated” during the competition where they had to sell something. She was the project manager. She had taken her assistant behind a curtain and told her to make sure she didnt lose and to buy whatever made her win. She had forgotten her Mic was still on. I lost whatever respect I had for her then….which wasn’t alot. She did end up winning that event. It makes me wonder if she is doing the same on CBB to be sure she is there on finalle(?) night. No one really knows what is being said behind closed doors, when the feeds are down or in the DR. I wonder if she is being told to give out little comments about the WH and Trump so that she is kept in the house just for ratings. And since when does big brother allow the house guests to post on Twitter while still in the house? I was disappointed on friday when the recent shooting in florida wasnt addressed. I feel that impprtant news such as that should be made available to them. Other than that i am actually enjoying CBB

I agree! Julie made a comment about this on her show and how Omarosa talking about the WH. I hate that they are pulling the politics into the game for ratings,

I think that Omarosa made a smart move in nominating Ross and Brandi. She essentially forced both pairs to turn against each other in terms of fighting for the Veto and keeping their partner safe. I’m not a fan of Omarosa but she is playing a smart game in the house. She has nothing to lose….they were all after her. Hopefully she at least gets one of them out before they get her….this week will be interesting

Ari has already turned on Brandi dur to her Shannon vote.

Omarosa is such a bull shitter! Omarosa is a bully and these big babies can’t complain about all their buttons being pushed.

both Brandi and Ross will be tortured til tonite – they should have listened to Brandi! Get rid of Omarosa – who gives a shit where she was fired from?

It will be funny if Metta, the one guy who doesn’t really want to be there and they keep around, actually wins Celebrity Big Brother

I wondered from the beginning if that “I want to go home” wasn’t BS and his strategy to sail into the final three.

I will love it if Metta, the 1 guy who doesn’t want to stay & they keep around, actually wins Celebrity Big Brother

They are all going to wish they did not get rid of Omarosa sooner. She is a deceitful and lying backstaber.

Simon and Dawg are not able to put the same time and effort into this season as they do with the regular seasons. They are saving their mental energies for the summer shenanigans.

Omarosa better watch what she says……her mouth will get her in trouble with the WH and the Clinton’s. So let me get this straight, she was pro Hillary then, jumped ship and was pro trump. Now that she has been fired by both, she’s trashing both. At some point, she may need to take a look at herself and realize, she is a problem.

Her personality is nauseating.