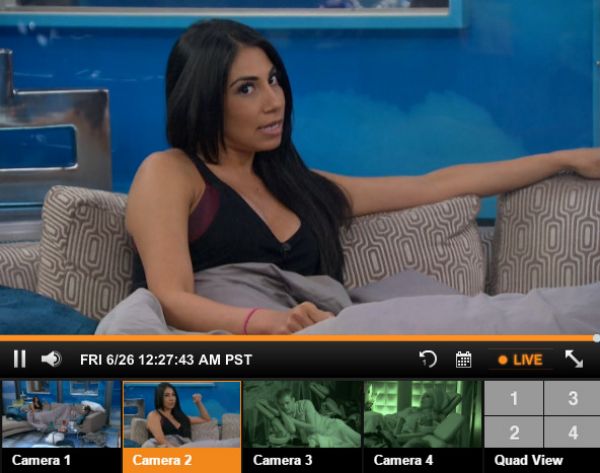 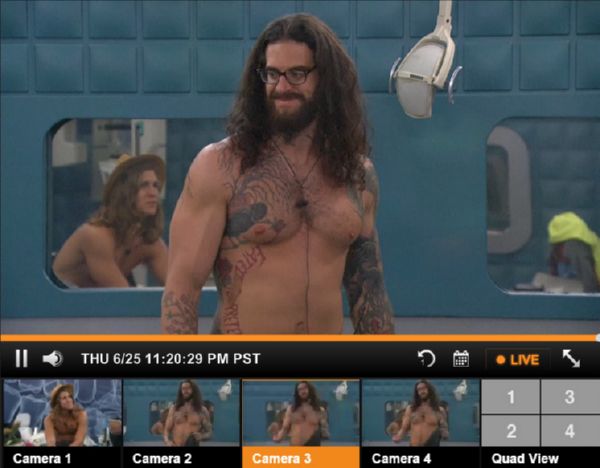 Jace – I like LIz
Austin – oh ya she’s the best it’s us three.. los tres amigos
Jace – a week until eviction anything can happen.
They start making fun of Jeff’s “Dad body” asking who wants a Dad body on the live feeds.

Austin says him and Jace are a bromance.
Jace says the have nots room is their headquarters “No one is coming in here”
Sounds like Jace is a bit worried James might backdoor him asks Austing if he goes out will ASutin gun for James. Austin tells him of course. Jace adds he’ll do some crazy shit if he’s nominated. 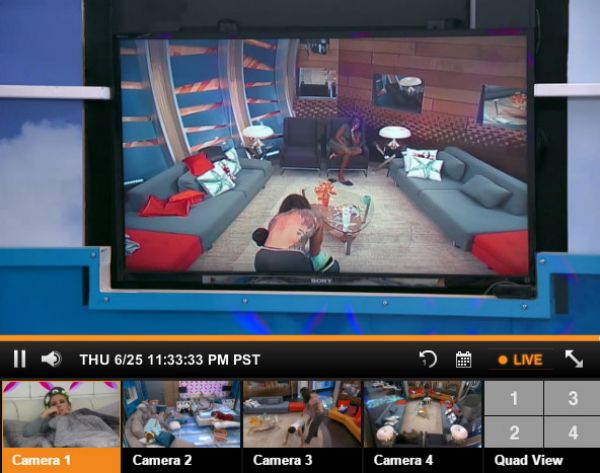 Audrey says her biggest fear is if Jace is in her bed “He moves around a lot”
Her second fear is to sleep with steve. Johnny Mac says he’s slept with both of them. 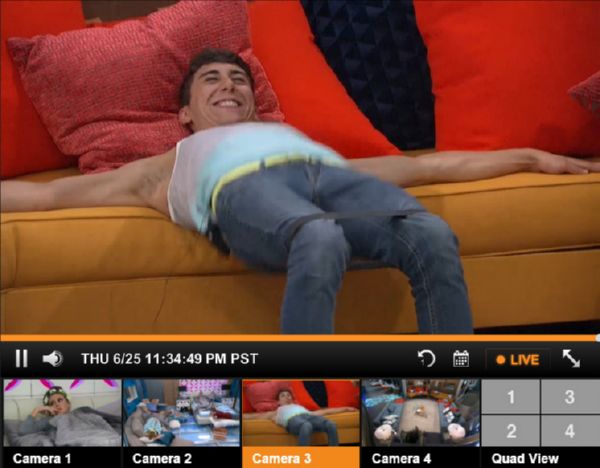 11:40pm Austin gives Jason some types on working his glutes. 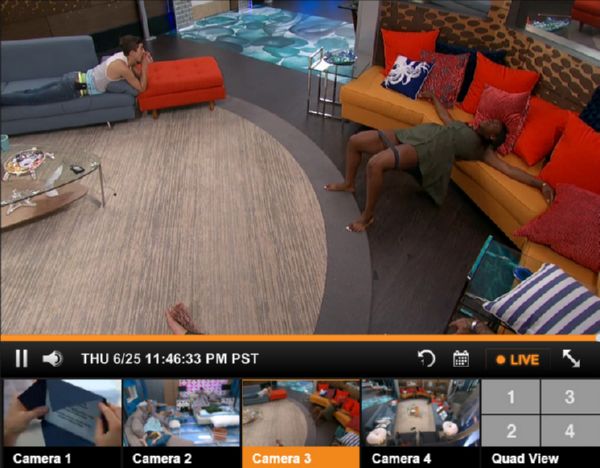 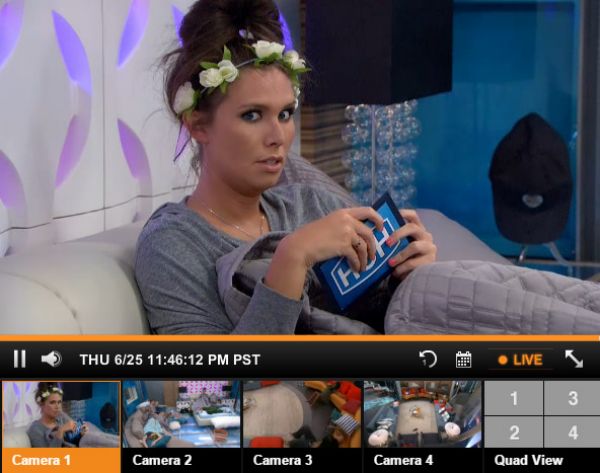 Audrey grabs a HOH card. “I just randomly found it but don’t want to open it cause it’s not mine..

She Reads it out ..
Audrey – “Ohh shit”
“Congratulations James you have a very important decision to make. You have to pick two people to form an alliance with America you have 24 hours”
She tosses it to Clay who reads it. (it’s not what Audrey had said it was the have not card) 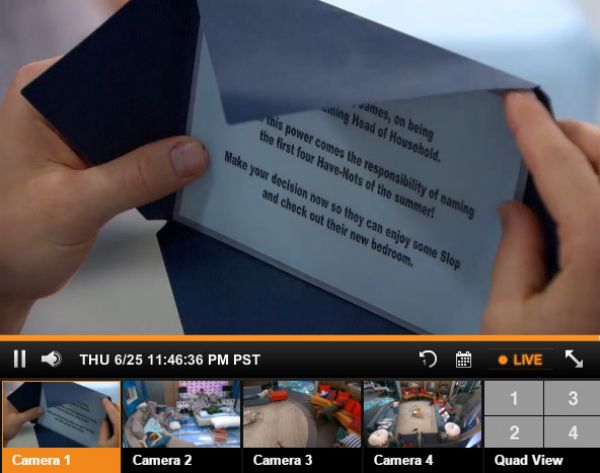 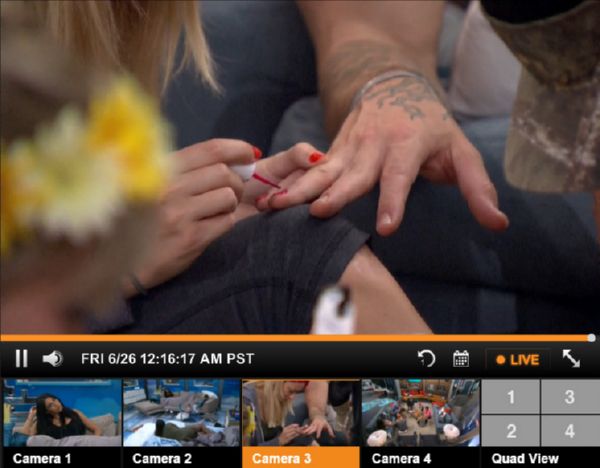 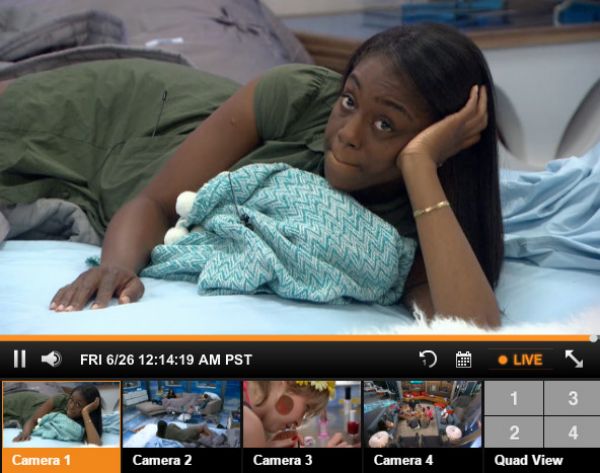 12:09am HOH Audrey, Jackie and DAvonne
Audrey and Jackie talking about how creepy Steve is. Audrey wishes there was a way for them to know if they were on the feeds.
Davonne thinks if you are having an exciting conversation the feeds will be on you.
Jackie starts answering questions about the Amazing race says it was only a 28 day show. She was in sequester for one week.
Jackie says not very many people recognize her after the Amazing race. Sasy she went back to her regular life and job.
Audrey says when she say Jackie in the “Photo shoot” She thought she was a model “For Sure”
Audrey – I can’t believe you haven’t been approached by maxim
Audrey brings up POWPOW from last season being on MAxim
Jackie – I’m just happy with what I have now..
Davonne wants to go back to her regular life after this.
Davonne leaves..

Audrey says Steve is the one to go if Jace doesn’t “He’s the backup plan”
She adds that Everyone will use the POV on Jackie except for Steve. Highlights how pissed jace and Sutin will be “I have no idea what he will do”
Jackie – I’ll look like the biggest idiot ever volunteering to go up
Audrey says the only people she’s not sure where their heads are at are Becky, Liz and Vanessa
Jackie says she’s never talked game with them
Audrey doesn’t think anybody has.
Jackie – that is why I offered to go up so I could be in the know
Jackie downplays her relationship with Jeff says they mentions how in your face Austin and JAce are about their “Bro Sh1t” points out her and Jeff are not planning anything they are not scheming in the corner “We’re doing our own things.. we’re not a team anymore unfortunately”
Jackie was worried her and Jeff were going to be nominated together week one ‘We wouldn’t get the chance to show you guys we’re not a duo”.

ASudrey points out that Shelli and Clay are “really really good looking” and when you see them talking together you think they are together.
Jackie brings up she’s happy with the plan to get JAce out he’s been pointing out around the house that her and Jeff were on a reality show together trying to make it sound like they are working together. 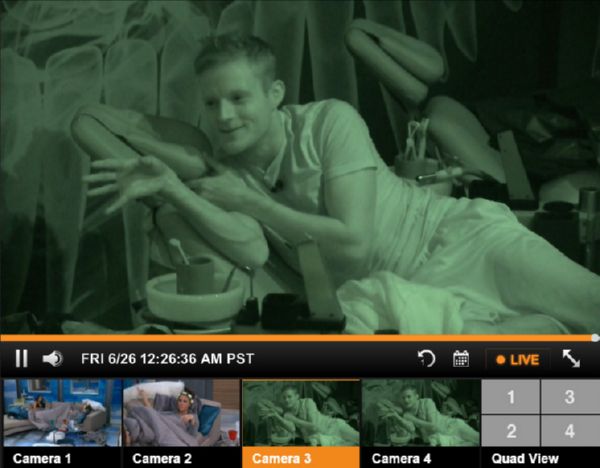 12:26am Johnny mac and Vanessa in the have nots
She’s still upset.. 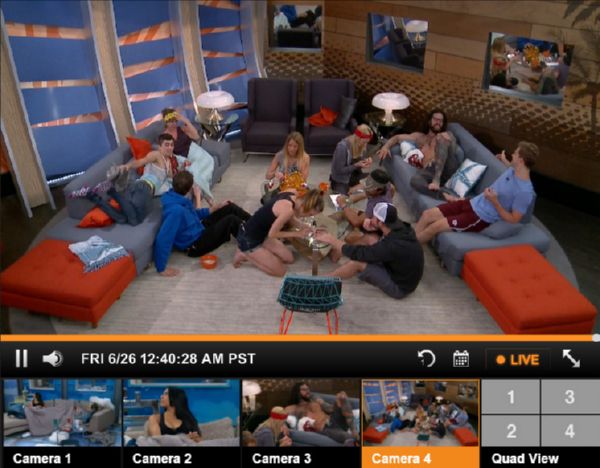 12:41am Nail PARTY while Jackie and Audrey watch them in the HOH.

No, that’s not ‘the’ reason you would look like the biggest idiot ever…..

If it’s Jackie vs Jace on the block, Jace will need to flip 7 votes to stay. Austin, Liz? If Jackie leaves 7-6 I am gonna be so pissed off!!!

Audrey will be the frankie of this season. Quote me on it.

Personally I don’t know how you can make a statement like that this early in the Season?! Live Feeds have only been up for a day and I haven’t seen anyone come close to Frankie’s personality of last Season. What show are you watching???? Let it go – move on. I swear people aren’t happy unless they are saying something negative in a Post about the players!

Lol. I don’t know… I’m leaning toward Jason being the Frankie of the season.
Remember how “lovable” Frankie was at first until his true colors came out???

No Jason will be worse than Frankie because at least at first Frankie had some fans. It’s only been one day following Jason and so many people already dislike him(Including me)

I just hope that the Davonne, Shelli and Audrey trio is still in effect. People are now grouping together and the three of them are positioned really differently (from what I’ve seen) If they solidify their trust, they can actually infiltrate the house and make serious damage. Audrey from the looks of it is tight with Meg, Clay and Jackie. Shelli was able to talk real game with James [which is a surprise because I have pegged her as a ‘just there’ character”, Davonne seems to be hanging out with Jason.

It’s hard to tell if they still are (we’ll have to wait for more updates), but if they are they could work most (if not all) angles of the house and have people target other HG until they are the final 3.

But when Clay talked about getting rid of Da’Vonne, Audrey was like “well you’d have to BD her.” If they were still aligned you’d think she would suggest someone else for Clay to target.

I hope Steve and Jace don’t go week one, and I’m surprised how much Audrey dislikes Steve. Jackie would be a much better option to leave. Hopefully noms stay the same, and Steve is safe.

I can’t decide who’s more annoying as of tonight/early morning. Jackie complaining about volunteering to go on the block (so stupid) or Vanessa’s crying. I’m starting to think they’re real tears (but then I remember she’s a poker player who professionally takes money from people in comps). Stop crying! You’re starting to look like GM.

I hope this year won’t be like last year, with the voting being unanimous all the time. That was boring as hell. People need to grow a pair.

I hope the votes won’t be like last year where it was always unanimous. That was beyond boring. People need to grow a pair and vote how they want. Crossing my fingers this group will be better!

I’m all about Audrey in the house and proud she came out and all but if she’s going to constantly belittle steve about how she thinks he’s creepy. Kinda going off a little strong there.

Are these 16 HGs so uninteresting that all they can ever talk about are previous HGs, previous seasons and previous competitions? Play your own game FFS!

Audrey calling anyone creepy is probably the most pathetic thing I have ever heard. How can a tranny call anyone creepy. I am sorry but as a heterosexual male it is disgusting watching a guy parade trying to imitate a woman. This person has serious mental issues and rather than being congratulated should be seeking help. What is the world coming to?

Yep! I’m totally with you on that one. Audrey is a self proclaimed sociopath… Amogst other things.

He has some serious mental issues and mutilating himself to resemble a woman obviously hasn’t solved it.

The only thing disgusting and pathetic are your comments and archaic belief system. Scratch that. It’s not archaic (considering transgendered people’s have been documented around the world for thousand of years), your beliefs are just plain ignorant.

Audrey has never claimed to be female only ever a woman. Woman does not = female (just ask Chaz). It’s an identity and anyone who wants it can have. Audrey appears (for now) to be of completely sound mind. You on the other sound like you have the problems. If you can’t keep up with the world then you should do some reflection on yourself rather than turning the blame on others.

I think it’s incredibly petty for Audrey to be calling Steve creepy, when he’s obviously socially shy, but she’s entitled to her opinion. Then again I’m not even sure she’ll last longer than him. She like many others are playing very hard very early.

I wouldn’t even give these ppl and there pathetic comments the time of day or a reply. They are attention seekers. It’s pretty much a waist of time and thought to even entertain it.

These guys are playing way too fast