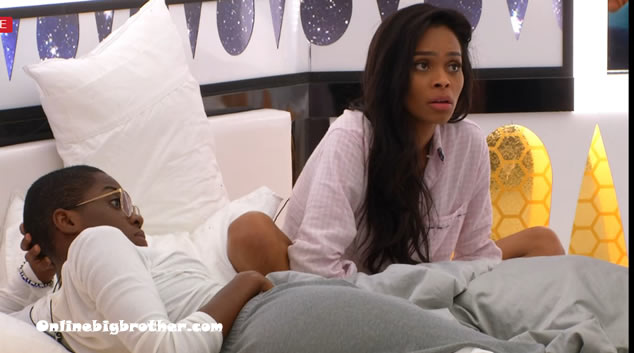 7:14pm Dre Ika and William
Ika says she doesn’t trust Sindy or Kevin.
Dre – who is Neda working with?
Ika says Neda told her Dre is coming after her.
Ika – she said if she won HOH she would put you guys up (Dre and William)
Ika says Neda is working with Sindy, Bruno and Kevin.
Ika adds that Neda wants to keep Dillon and when Ika said she won’t because that’s not what Dre and William wants she got pissed.
Ika says Neda, Bruno and Kevin will go to Dillon and convince him that they convinced William to keep him safe.
Ika – he will have allegiance to them and com after you guys.
William says he’ll still play along with Kevin and make him believe that he wants Dillon out.

Ika says that Neda feels safe with everyone in this house except for Dre that is why you’re her target.
Ika says Neda doesn’t care what William wants she thinks she has the votes to keep Dillon.

Dre – I want them to use the veto so we can put up Bruno
Ika counts the votes, Dre, Ika, Demetres, Karen and William is the tie breaker.
Karen comes in.
Ika – you ok with Dillon going
Karen – f*** ya

7:14pm Bruno and Neda then Jackie

Karen asks if theres any chance Kevin will use the Veto.
Emily says zero “He doesn’t want to rock the boat”
Emily says Kevin won’t use the Veto because he’s worried that Bruno will go up.
Emily says they told him for nominations the 4 possibilities where Bruno, Kevin Dillon and Emily
Karen doesn’t believe that ‘kevin was in his bed all night”

Karen – is Jackie with the French connection
Emily – not with Dre she has a relationship with William.

7:40pm Karen Dillon and EMily
Dillon says there’s no way Kevin will use the veto
Dillon says William, Ika and dre want one of them to go home and Kevin doesn’t want to upset them.

They decide to try and see if they can get Kevin to use the veto and backdoor Bruno
Dre says if they can pull this off and she goes home the next week it’ll be worth it.
Dre mentions they can pull Emily and Dillon onto their side against whatever is left of Neda’s side, “we flip the house”
Dre says people in this house sees her as someone that doesn’t lie and someone that is real she believes she can pull Dillon in.
William says all the blood is going to be on him if they backdoor Bruno.
Dre says if they can pull this off Canada will be like “WHAT THE F*** JUST HAPPENED”
Ika – you don’t think Sindy should be the one that goes
Dre – No 100% Bruno

William – I’ll have the blood on my hands and at the end of the day it’ll be your (Dre) Idea.
Dre – we’re trying to make history right now 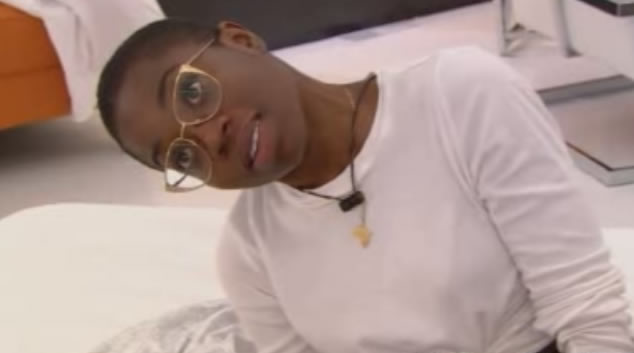 Dre – If kevin and Bruno are in this house when I leave you’ll find me hung somewhere like this
Dre – I’m going to hang myself
Ika – I thin khe should have initially have put Bruno on the block
Dre – no because he would have pulled himself off
Dre – if we don’t start making moves we’re going to be picked off.. I can’t talk to neda she has good intuition so when I lie to her she knows
Dre – I’m not going to talk to her..
Ika – she can go f** herself

Ika says they call a truce with Jackie to attack the other side.
Dre – she’s not going to do it
William – I’m going to talk to Kevin tonight
Ika – Run
William – everywhere

Ika and Demetres
they agree the difference on who goes home is pretty small. Ika says Dre wants William to try and convince Kevin to use the veto so they can backdoor Bruno.
They laugh.
Ika – that put us in a bad spot

Demetres says if Kevin uses the veto he’ll smack him, “The thought hasn’t crossed his mind”
Ika says William doesn’t want to do it.
Iak says they have the votes just like they’ve had all season long and if Kevin uses the veto on Dillon she’s voting out Bruno.
Demeters – we have to make sure that Veto doesn’t get used
ika – it’s not
Ika says they will not let Kevin use the veto

Kevin comes by Ika tells him she’s doing what William wants.
Kevin doesn’t care which one goes, “It’s not one of us”
Bruno rolls in.
Ika says that Neda is pissed off she wanted them to vote out Emily even if that isn’t who William wants out.

Demetres – Sorry you (Neda) don’t get your way this week, princess.
Ika – Sorry
Demetres – Like you already got handed half the fucking game to you
ika – she’s a selfish player
Demetre s- I can’t Believe they f***g did that..
Ika says Canada should have given the immunity to someone like gary someone they need to stay in the house for entertainment, ‘She’s boring and dry”
Demetres adds that Neda brings everyone else down.

and neda has a huge nose and ika has huge nostrils. ugly people up in this house.

William is kinda stupid no?

No kevin is way too smart to use veto. William blew his chance at actually playing big brother.. Worried about blood on his hands lmao when hes now a target for winning twice recently. Ika only person I like reading about as she bashes everyone and gets away with it. Pretty impressive in the bbcan house. Dem is a sheep too following along… I am dissapointed in his reluctance for any risk while he digs his own grave playing it safe. Dre has right mindset but cant win anything to put her mind to good use as william (supposedly superfan) falls in love with a straight guy and loses 100k. As for people thinking what kevin is doing is disgusting.. William gets warned everyday and still falls for it.

So Will pretty much just locked in one of the 6 to win the game. They now have the majority vote in he house so long as one of them stays off the block which is such a steam roll into jury. If Emily goes, the 6 takes out a comp threat and the frenchies are on the block and gone in 4 weeks minimum.

Am i the only one who can’t stand Ika? ..
Yeah neda sucks too but Ika is just a ratchet bully .. like come on.

The Shine on Ika is starting to dull

Hey Simon. Thanks for the updates daily.
Donated to your site.

You’re welcome and thanks for the support :) ;)

She thinks because everyone enjoyed her letter shredding in season 2 that she can get away with her bitch mouth this time around. Nope.

When they r counts votes are they wrong

Am I missing something

There’s time when they think William is the tie breaker

I see what Neda is trying to do here, she is trying to get out all the girls so the guys can all be her meat shields and in the end will take one another out while she stays until the end. Man, this girl didn’t learn anything from Jon, did she? Unbelievable. Does she have one of those “princess, a shining knight in armor will come save her” mentally or something?

That makes no sense. Neda taught Jon how to play. He will say it himself. Neda went after the people who were gunning for her.