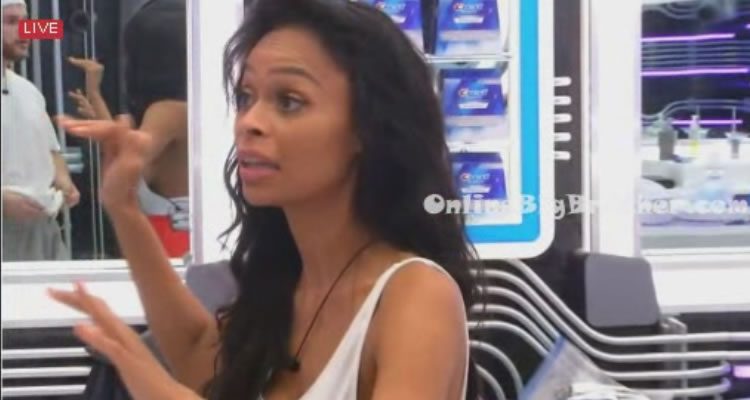 What a hectic late last night and morning. Some of these vets are playing so hard it’s only week 2.

Cindy and Demetres HOH
Demetres says he’s probably putting Dallas up . Cindy says Dallas is running around to everyone this morning but he’s making her slop cookies so she can’t get mad.
Demetres thinks the newbs are going to blow up on Karen and try to get her put up last minute.
Demetres – I’m not putting up KAren. She’s someone that can fill the block if they win
Demetres is confident that their side has the numbers to keep them safe unless the other side of the house wins HOH and POV. He’ll have to live with having emily and Dillon as enemies

11:48am Ika and Gary CAm 1-2
Gary isn’t going to risk his game for Dallas. She thinks going hog wild so early in the game to protect Dallas ia a bad idea. Ika doesn’t think it’s a bold move. Gary thinks Dallas made a mistake and has to pay for it.

11:48am Demetres and Jackie HOH Cam 3-4
Jackie brings up Bruno being the mastermind of the attempted house flip.Jackie says if she doesn’t go up Demetres is afe next week. Demetres tells her he’s not dwelling on the flip too much. Jackie mentions Mark telling her that he 100% has bruno, “I was looking at him sad.. Because I already knew he was going home.. They must have been working together”

12:13pm Ika and Neda CAm 3-4
Ika – We’re sending a VET home week 2 that’s smart (Sarcasm)
Neda doesn’t think they have the power to change Demetres mind “they” really want a vet out
Neda says whatever Ika decides she’s voting with her.
Ika – Kevin and Bruno are playing too hard as soon as he won HOH they’re like let’s backdoor Dallas.
Ika says the vets owe it to each other to tell Dallas he’s going home.
Ika mentions CAssandra freaking out last night
Neda says Cassandra knows she f*** up her game with Neda.

Ika tells Neda that Gary is playing the best game right now. He’s sitting around doing makeup collecting all this information. Ika says she sees right through that.
Neda – no one is talking about gary
Ika – I trust him as far as I can throw him.. he’s shady
Ika – he doesn’t give any information
Dre comes in tells them that Kevin and Bruno are coming after her she wants one of them on the block.
Ika tells Dre not to throw names out right now because right now she’s safe.
Neda says as long as Dillon is in the game Dre is safe because he’ll be the target
Dre – I do trust Cassandra what she’s saying
Dre adds that Cassandra will eventually take her out. Dre points out that Cass has never mentioned Neda or Ika’s name.
neda smirks “Well she can’t come after me”
Dre says Casandra is after Bruno
Dre is not save with kevin.
Ika – I don’t like kevin
Dre – Kevin, Bruno and Cassandra those are the same people (HUH?)
Neda – Bruno and Kevin are more intimidated by guys they don’t see girls as a threat


12:13 Cassandra and french connection have nots 1-2
Cassandra tells them if they can get bruno out they are the masterminds of the game.

1:00pm Neda, Cindy, Ika and Cassandra
Neda says if they can convince Demetres that Dallas is going after Dillon they can get Jackie to go up and vote out Emily.
Neda mentions that the Power of Veto ceremony is usually on Sundays but now it’s not it’s tomorrow. they wonder what is going to happen today. they agree Emily shouldn’t have celebrated so much after Dillon had won. “Everyone already knows those two are together.. it just made us more annoyed”
(POV Cermeony are Monday’s like BBUS)

Ika tells him he needs to show that he’s against Dillon. They have his back.
Dallas – During the POV ceremony 100% done.. You guys the vets you have my loyalty to the death.. I swear to god.. the meeting we still should
Ika – I don’t trust Bruno and Kevin but for now you pretend like you are .. BRO THEM UP BRO THEM UP
Ika – as long as you have Me, neda and Cindy.. as long as we have the numbers they can’t do anything..

Talking about setting up a vet meeting
Dallas – you and Ika are my f**** number ones to death..
Cassandra – no I’m your number 1, I go tthem to trust you

1:30pm HAve nots Demetres and Ika
Ika is working to keep Dallas. Saying Dallas is with them and will target Dillon.
Demetres – my gut has been telling me to get rid of Dallas.
Ika – the position we have in this game is amazing
Ika says jackie is playing a “Weak crybaby game”
Demetres – will she vote Emily out over Dallas if I told her to
Ika thinks so because Jackie kept her word with Mark
Demetres – I’ll throw up Dallas and if something happens and we change out mind we can punt him out.
(emily is now the target)
Demetres says when talking to Dallas it feels genuine but it did last week to.
Ika – I can’t trust Kevin he’s weird

This back and forth is driving me crazy…. Cassandra and IKA are so over playing it’s not even funny. I’ve included the conversations with little.

Dallas saying he’s going to lay some heat on Dillon

Ika tells Cassandra that Gary told her he’s not voting to keep Dallas he’s not blowing up his game. Ika is certain Dallas is better for their game. Ika questions if they are playing too hard or if Bruno and Kevin are. Cassandra thinks it’s Bruno and Kevin. Ika says if Dallas gets nominated he’s going home they don’t have the votes. Gary joins them.


4:20pm Dallas, Ika and Cassandra
Ika tells Dallas the only votes he has right now are Jackie, Cassandra and Ika.

nedas right cassandra 100% can not be trusted anybody who watched BBCAN4 should know that. Also, ika (da’vonne) needs to stop making alliances with everyone, and then she wants to call a vet meeting? wtf? shes just asking to be exposed. the vets that are in the best position right now are cindy and gary, havent heard their names thrown out. they should be good at least until jury. also newbies are dumb as rocks. two newbies have won hoh and both times they have targeted newbies (using your HOH on emily? really?). anyways great season so far!

Ika and Cass are playing way too hard too soon!!

Watcher of the land

Yes…. Ika and Cass are playing really hard. Ika is in a really good spot so she is really risking a lot to save Dallas which could ruin her. But I do not think she’ll be targeted for the next couple of weeks because there are other people who are big targets before her. I honestly think she’s playing a better game then she did her first season. She’s been able to line things up for later on down the line. Why would you evict people you can use and work with down the line? Emily does nothing for her game. Her social game has also been the best. Getting rid of Dallas is not a great move for the vets. It’s make them one man down. I think if they can keep Dallas they could pull them back to their side. She’ll need him to go after Bruno and Kevin later on. Playing hard now could mean the end of her game, or if she plays it right it could get her the furthest. This game is like playing chess… every move needs to be calculated.

Keep up the good work Simon!

Can we get the links from one spoiler to the next back? They used to be at the end of each update.

Sure thing.. it might take me a couple days to code it in but I’ll get it done. Tonight’s the kraken hour ;)