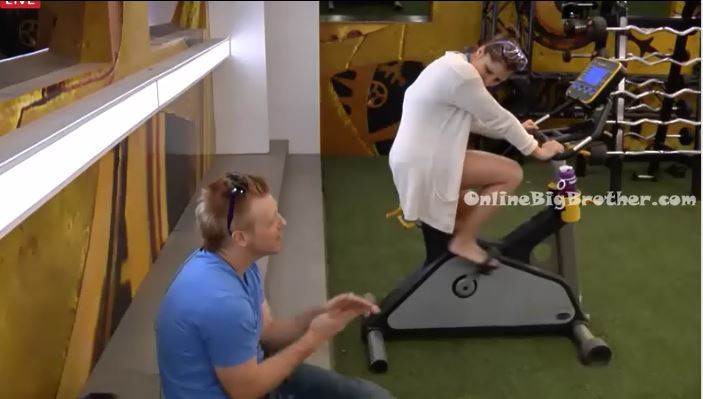 In the bathroom – Jordan and Zach talk. Jordan says he can’t wait till wednesday. Zach says it will be interesting. Right now I am literally plotting the house against my own alliance. Literally plotting for a massive collide.. like Viking style. Jordan laughs. Jordan reads a stain remover – tackles the toughest stains. “Could use that for some of the skid marks” Zach says he can’t wait to see who wins HOH. Jordan says hopefully Graig or Naeha… then we’ll be eating popcorn. It will be a crazy week. Naeha won’t win. G might. Zach says if she does though. Jordan says chaos right!

6:25pm – 7pm In the living room Cindy gives Bruno a massage. In the bedroom – Naeha and Willow are talking. Naeha tells Willow I feel 100% safe with Zach, you, and Sarah. Naeha says she doesn’t know what she would do. It would be nice it there was a consensus next week as well. They end their conversation and head downstairs. In the kitchen Kevin and Willow are playing slop ball. Big Brother tells them to stop that! Willow asks We can’t play slop? Kevin moves the game out into the backyard.

6:55pm In the bathroom – Jordan, Bobby, Sarah, Zach, Asleigh are hanging out chatting about random things like cat stories. Ashleigh says that her neighbours cat hung itself. Jordan laughs and asks how. Ashleigh says I think it was by accident.. 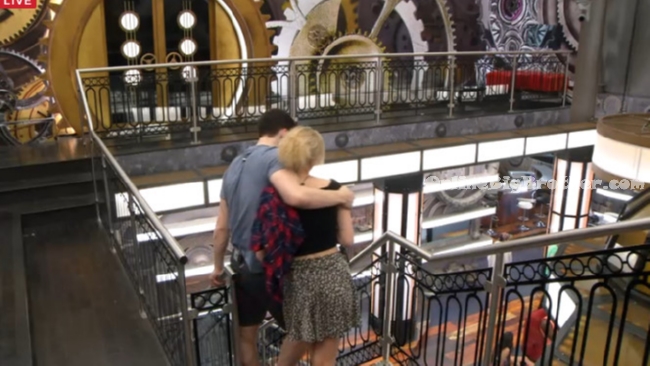 7:10pm – 7:20pm Jordan and Zach head into the bedroom. Zach says we used to have 15 mugs and now we have 4. He say same with the lamps theres one in the living room and there used to be one by the door and now its gone. Zach says we’re on to you big brother. They head downstairs. 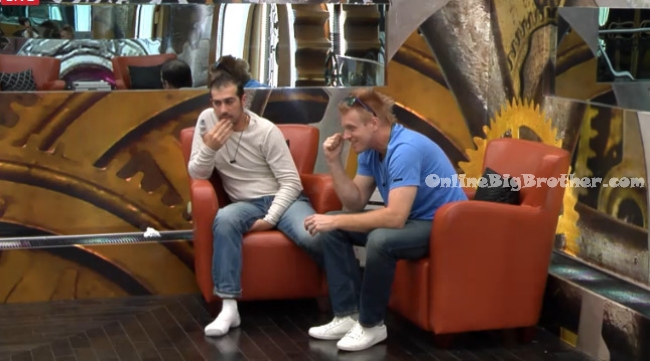 Too bad we didn’t get to see Risha play, Pilar is sweet but she doesn’t seem to know she’s on Big Brother and she’s kinda boring to watch so far. Great cast though, they all seem to have a bit of game in them (except Pilar, and that’s not meant to sound mean).

another name
Reply to  Paulie

I doubt it is strategy, but if pilar were actually playing the be the nicest person and stay out of game talk in order to make yourself harder to evict strategy, I would have to give her some respect. who wants to evict her and look like the dick that shot a cute and fuzzy bunny when there are actual predators in the room. but… I really doubt it’s a strategy. too bad, it might work as a social game move in the first couple of weeks.

Watcher
Reply to  another name

I think people are underestimating Pilar.

why do I get the feeling it isn’t the first time graig has said, ‘and then she started to move and it ruined my climax?’ semi joking: semi creeped right out. shudder. creeped out wins. yeah… I really think I dislike graig.

tastyjane
Reply to  another name

Willow is obsessed with Zach lol

Am I the only person that doesn’t buy Pili and Kevin? I don’t think he has an ounce of interest in Pili even “just for fun”. I also don’t believe that Pili is interested in him, he’s just helps her pass time. Something is just not kosher.

amy
Reply to  The Truth

Finally someone speaks the truth 😉

watched the Monday episode just now…. I realize it’s a one hour program, so not everything is included, but golden edit much?
if I disregard the feeds and the updates the chop shop is getting such a good edit.
no one would know about graig’s rants, or that godfrey had stirred the pot with a lot of people as sketchy making him the initial target, or that willow is mugging for airtime to become a favorite quickly becoming annoying, or that Zach and willow were doing whatever they were doing pre-ashleigh, or that sindy has flirted her way through kevin, bobby and graig in about a week before ending up on the block, let alone that b&g and Ashleigh and bobby have final 2 deals. given the edit, you’d barely know godfrey, graig, Bruno, willow, or pilar were even in the house.
my conclusion is the editing staff is trying very hard not to have too much of a recreation of bbc2 first 5 or bbus 16 bomb squad. when they don’t show any of the chest beating tomahawking we rule the house meetings that occurred quite a bit before bobby even became the hoh, gotta wonder, is production backing that horse?

Oh no, Naeha, no. Talking to Zach, who clearly wants you gone? Dammit I hope this whole thing doesn’t turn out like BBUS16 where the girls give over their trust to the hidden alliance.