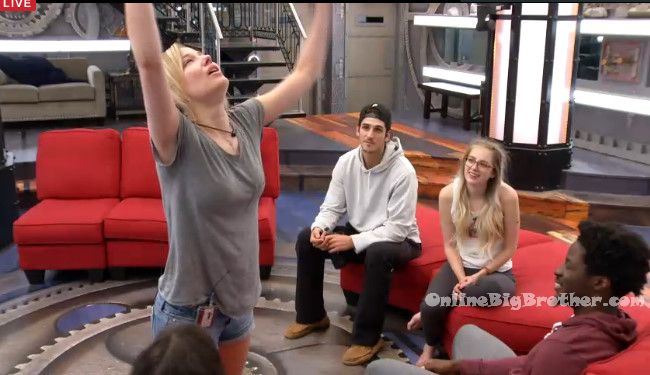 3:45pm The feeds return to Ashleigh explaining to all the other house guests that she opened the door and it was pitch black. All of a sudden a spot light was on their loved ones. Ash says that her mother was there. She got to talk to her. Godfrey says he got to see his and she is pregnant. Ash says she just stood there and hugged her forever. Godfrey says that he thought he was going to get a movie or some cash. He tells Ash good thing you were good at tasting all that food yo! Sarah says wow that is so cool guy! Pili says that is amazing. Pili asks what about your sister god?! He says that he didn’t know what to expect when he saw her sister in the backyard. Ash says that she can’t stop crying. Sarah asks was your sister freaking out. Ash says yeah when I gave her a shoutout in the HOH. Sarah says two minutes? Ash says It felt like 30 seconds! I can still smell her on me! Godfrey says that was so unexpected I thought we were going to watch a movie. Pili says I am so happy for you two! Godfrey says thanks Pils! Big Brother blocks the feeds again. 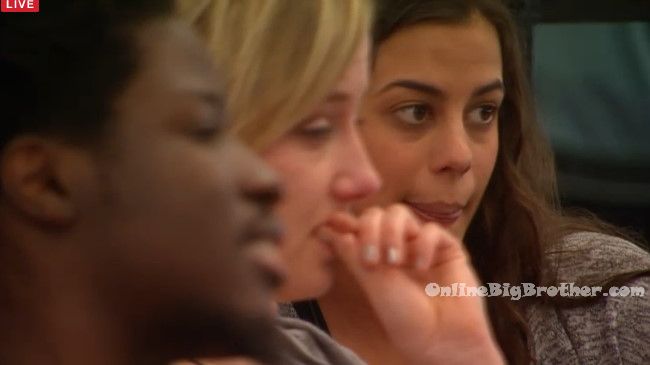 4:05pm – 4:15pm The feeds return again – The backyard is open. Zach and Brittnee are sitting out in the hot tub room in silence. Ash is talking to Pili and Sarah in the backyard. Pili asks were they standing here? Ash says we did it separate. I did it first and then Godfrey came out after to see his sister. They head to the hot tub room. Brittnee says I am happy but you can’t help but think about that feeling. Ash says its good she doesn’t know if she can stop being emotional. Brittnee says it will be hard but use it as that extra push. Ash says I’ve never seen Godfrey so emotional. His lip as quivering. 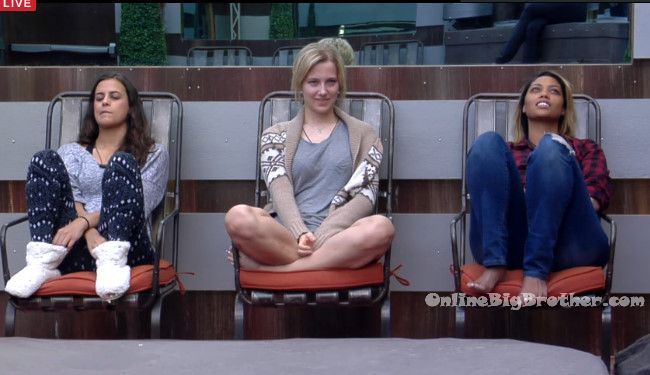 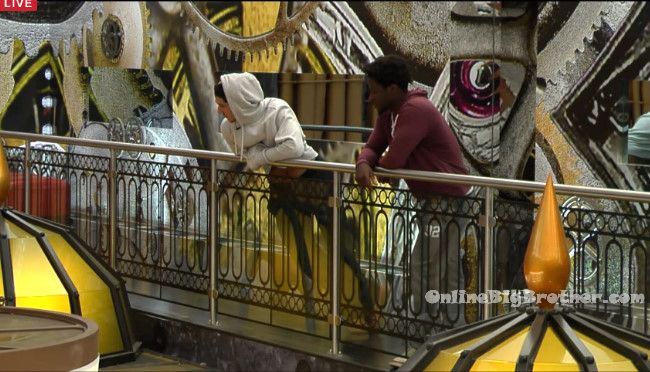 4:30pm – 4:40pm Up in the HOH room – Sarah asks Pili would you be mad if I put you up. Pili says I wouldn’t be happy about it because nothing is for sure like twists and stuff. Pili then says Its okay, I am fine going on the block. Sarah says Its Ashleigh really because God doesn’t matter. Here are the votes I know B will vote out Zach. So you trust Ash right? Pili says it will be hard for her to vote out Zach but I know she wouldn’t vote me out. I am sure about B’s vote but I am not sure about your votes. If you’re not up you have the option to keep Zach. It would be very tempting for you guys. When Zach starts talking to you guys I feel like it would be very tempting. Brittnee joins them. Pili says I am not happy about it but I am fine with it. If I end up leaving I just don’t want you to be unhappy. Sarah says the only twist I see happening would be if Zach had a secret veto from before. It would be awkward because we all love Zach so much. If he was sitting up next to God it would be so hard. Brittnee tells Pili I am not voting to keep Zach I am voting to keep you. Pili says she (Ash) wanted to be on the block next to him so she didn’t have to vote him out. 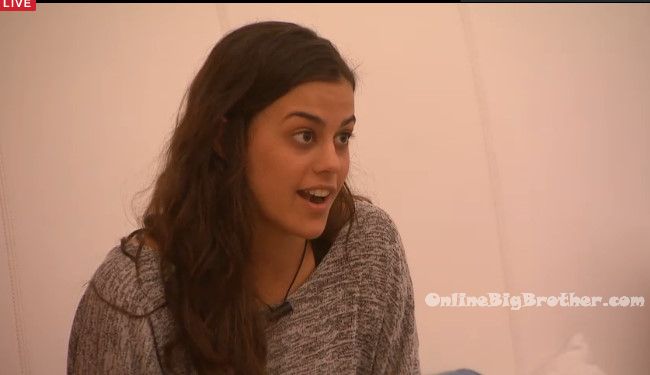 4:45pm Zach tells Pili that he is going to tell Brittnee tonight that he thinks he is safe because I think I have Godfrey and Ash. Then Brittnee will run and tell Sarah. Zach tells Pili that tomorrow before the veto ceremony she will go and tell Sarah that she’s seen Godfrey talking to Zach and its sketching me out. You tell her that you are a vote to vote out Zach. Tell her that Ash is my best friend but I am not sure who she would vote for. I know that I have to split up Zach and Ash. Zach tells Ash that she needs to start acting sketchy around Sarah. Ash says that’s okay because I am already emotional. Zach says I will plant the seed late tonight with Brittnee. So that hopefully in the morning it shoot paranoia into Sarah head. Ash says brilliant. Ash tells Pili we’ll go practice… I’m Sarah. Zach tells Ash and Pili we can make this work. I am going to hang around Godfrey all day to make sure she sees me with him. 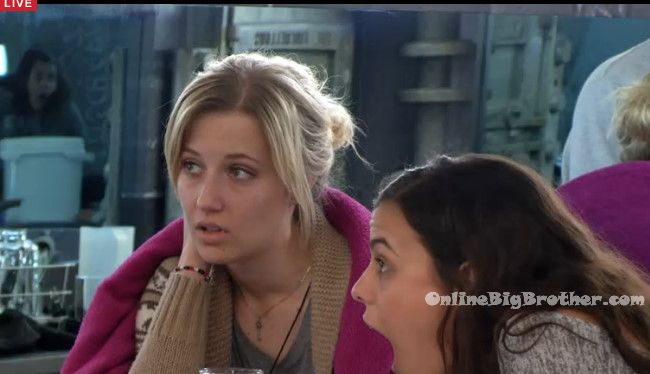 4:45pm – 5:10pm In the bedroom – Ash gets Pili to practice what she will say to Sarah tomorrow morning before the veto ceremony to scare Sarah into putting up Godfrey instead of her. Zach joins them and tells Pili to go to Sarah in a frantic state. Pili says I will say that I am pretty sure Godfrey is going to vote for Zach to stay and Ashleigh won’t tell me who she is going to vote for. I think she’s going to vote for Zach to stay. Ash says a key thing to tell Sarah is that if you stay off the block you can break them (Ash & Zach) up. Zach tells Pili to tells Sarah that Ash was giving me the weirdest read last night. Zach leaves. Pili asks Ash he (Zach) genuinely means that right .. like he isn’t just using me to keep him here so he can eventually get me out right?! Ash says he wants us to go to the final 3. I think he know I would take you over him. He never tells me what he would do. Pili says I don’t really trust him. We are doing this for his game not ours. I know he would take you over me. If that happens I am not going to forgive myself because it would be because of this move. Pili says you’ve been killing comps and I’ve been a sh*t show! Pili says if we want to make a big move we have to play smart, we’re playing with our hearts right now. Big Brother blocks the feeds.

5:23pm – 5:45pm The feeds return – with Zach and Godfrey hanging out in the hot tub room. Brittnee and Sarah join them. They chat about being able to enjoy the weather in Toronto when they get out and other random things like dinosaurs and the power of the human brain. Ash heads inside to shower. Pili join Ash in the bathroom. 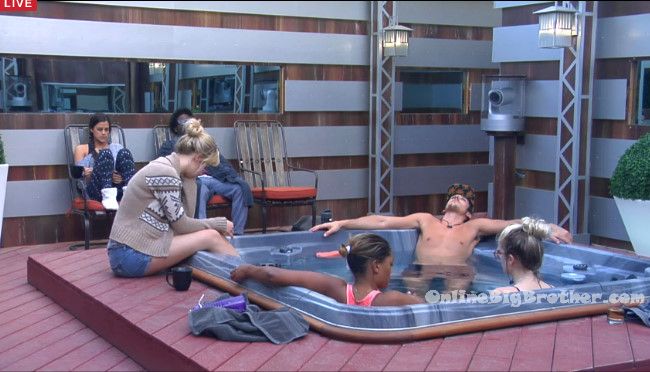 So Ash better figure out who is more important? Her family or the guy/DB that will dump you soon as he’s done using her.

Watcher, I am not sure what you mean. Surely Ash wanting to keep an alliance member in the game has nothing to do with how important her family is to her.

Ashley may be throwing away her chance to win $100,000, or even $20,000 which would help her family, by keeping her alliance member Zach. Who actually is not that interested in her.

The only way Ash will vote to keep Zach is if Godfrey convinces Zach he is voting out Pillar, and then Zach would convince Ash.

I wouldn’t say its a guarantee Zach goes home either. Godfrey is a wild card! He threw that veto when he was on the block, and to me, there was no rational explanation for it! He a very odd dude, and I don’t really understand his following, but to each his own.

I’ve noticed if there are money up for grabs in a comp, Godfrey will fight to win it, otherwise he’s fond of throwing comps even if he’s about to be backdoored.

Uhh, maybe hindsight DR blast.
5K this POV and he wasn’t that close to Ash’s 1/2 hour.

GODFREY, WAKE UP! I seriously hope this kid is talking out of his ass when he says he’s considering keeping Zach!

YOU OPENLY CALLED HIM OUT AS YOUR TARGET! Jury will not vote for you if they find out you’re brown nosing Zach.

Not a bad strategy by Zach. I don’t think it will work, but good for him for not just lying down.

The Diapers are really delusional if they think they can scare Sarah into putting God up. If Sarah threw God up he would go home then it’s Brit vs the 3 diapers in the double eviction HoH and the fembots would more or less be screwed.

I could only imagine being locked away in a house like this for so long, and only see them for 30 seconds. All the emotion.

Anyways, I do not think Zach’s plan is going to work, but I am happy that either Zach or Pilar is going to go home this week.

Godfrey not a good liar…he’s got so many “tells”

This week both Ashley and Godfrey have hard decisions to make. If Zach stays, the lines will be drawn for the remainder of the game.

Where do you guys live Simon and Dawg ? Have uze ever tried out for BB. ? Thanks again and donations coming…will on Friday the 22nd.
Geezus feeds have been down alot eh?
Do you uze think Zach will get past 1ST eviction?

We’re on the west coast of Canada. I’ve never tried out for BB.

Thanks we appreciate the support 🙂

if godfrey keeps zach, he will never win if he makes it to the final 2. The jury would see him as a joke & it will almost be as bad as zach leaving Jordan up on the block. I would say the only way he would be able to win is to vote out zach so he can say he helped in making a ‘big move’ & to be sitting next to Ash or Britnee.

Zach your plan is not going to work, Sarah is smarter than you. I want to see her win it all. Go Sarah!!!
Side note: What is with Britnee stroking Zach the other night? She hides her “crazy” very well. Lol.

The Truth
Reply to  livefeedjunkie

I have to agree. Even though Zach and Ash are not boyfriend/girlfriend I found that inappropriate. When you add that with the comment she keeps making about Ash having a mean streak it’s make her look jealous. I think Ash must remind Britt of someone in her past that she did not like and she is projecting those feelings on to her. I don’t know how else to explain her comments about Ash. There is no footage of this “mean” behaviour.

Brit has a crush on Zack … That is why Bruno the time bomb went instead of Zack and Willow left because Brit was jealous of Willow… .. Bad move after bad move. I do not trust Brit at all.

That POV comp was rigged for Ashley. She’s the only one who knew Sons of Anarchy well.

Why Sons of Anarchy? Is it Canadian? Seems like an odd choice for a POV.

Watcher
Reply to  The Truth

Because it’s their equal ..Started out good and got more unbearable to watch … lol