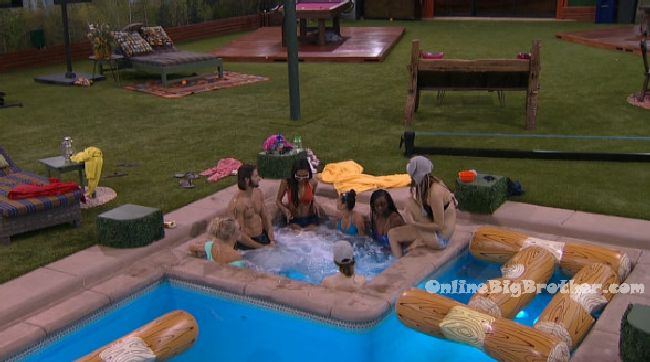 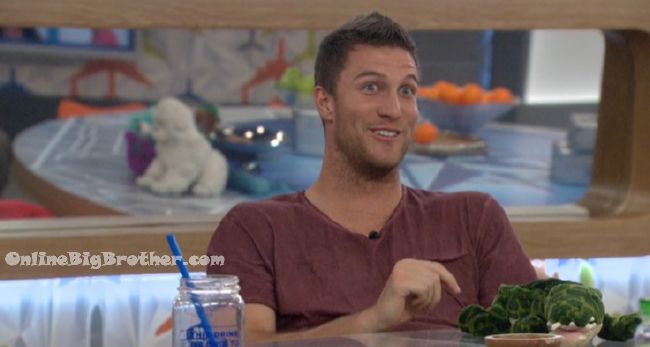 
11:10pm Bedroom – Jozea is talking to Bronte. Jozea says I’m not angry, I’m just upset. If I drink I just get inside my head. And I don’t want to do that. I can’t put on a smile when people are being fake to your face. She tried getting close to me with the whole gay thing… she’s (Tiffany) gay and I’m gay. Don’t lie to me. Paulie’s walking around the house like he ain’t going home just because he’s had a couple drinks. If everyone was just honest in this world, this world would be a lot better. I’m like glue.. I keep people together. Even if like I get HOH when we’re down to 8 or 9 .. that’s all of us .. I would let you guys decide who goes up.

Nicole is talking to Victor. Nicole asks am I Natalie’s target. Victor says Natalie doesn’t have targets. If anybody it would be Bronte. Victor says that Jozea is livid. He is pissed at Tiffany. Yesterday when he was having his meeting she butted in. Nicole asks why am I Bronte’s target? Victor says if anything its because you’re a vet.

11:35pm In the living room James pranks a drunk passed out Paul.. 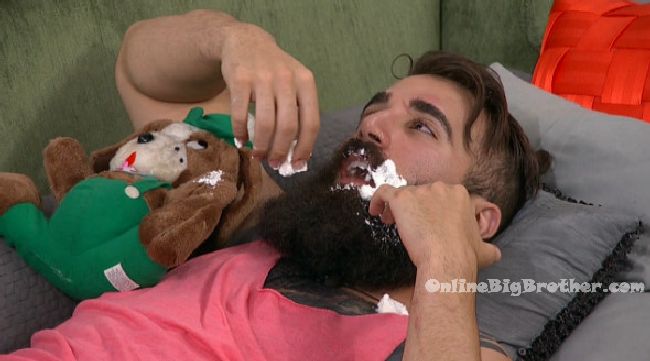 11:50pm Cam 1-2 Backyard – Paulie tells Bridgette that she is good even if she goes on the block because she would be up against Jozea. Even if he tries to bully, you can use it against him. Michelle says I can’t stand another meeting. Paulie says oh he will have another meeting as soon as the nominations are done. Bridgette says I feel like I’m caught in the cross fire. Michelle says I don’t think people are saying as much as you think they are. Paulie says just stay positive.. everything will work out. People are looking out for you.

12am Frank asks Jozea who he thinks will go up. Jozea says I don’t know. I don’t think it matters since Paulie or I are the targets. Franks asks who do you thinks won the roadkill comp. Jozea says maybe her (Tiffany). I’ve been observing her.. she hasn’t said anything about it or talked about it. 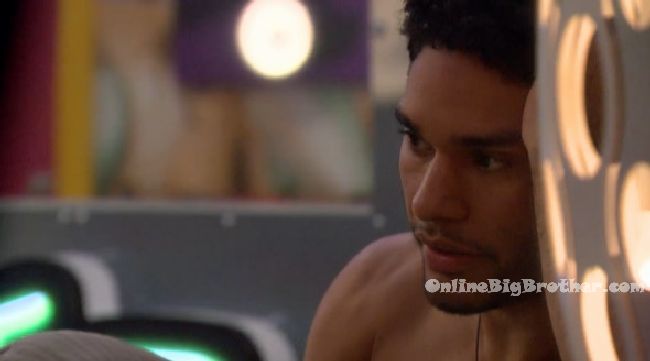 Well this is going to be a pretty interesting week!

I must have missed it but what did Frank say that pissed off Tiffany tonight and made her cry?

She was correcting him on how many bottles of wine there were and he snapped at her saying he was the one that grabbed them out of the storage room so he knows how many there were.

Once again Dawg to the rescue….

Really? I can’t stand him . he’s evil; he needs to go home next.

I fucking love frank I haven’t cracked up this much from a houseguest since Brittany Enzo and lane in bb12!

Curls for the Girls

Sam
Reply to  Curls for the Girls

Tiff cried again tonight over Frank she said, he apologized & kissed her on the cheek, thought she was over it. Is it really Frank or comparing herself to Vanessa, or feeling picked on since Jozea & Paul are calling her out for pretending she’s gay? Seems people are either intimidated or feel her questions & staring a little too intense. Da, Zak & Michelle have expressed some doubts but they seemed genuinely concerned & tried to make her feel better when she was crying. She keeps telling everyone she studied the feeds last year, even when her mom got kicked off, could it be Vanessa’s game got in her head too much, and she’s worried she’s not playing her own game. Maybe you’re right, it’s the wine.

Pretending she is gay?

She has said she has dated both men and women. Never said she was gay. She never made it a issue. You are really going to take what Jozea mister personality disorder and Victor mister dumb as a box of rocks…you are going to re post as fact what they say?

A Jozea and Victor fan. Who knew they existed? Welcome.

I wish Paulie would go home. He gets on my nerves.

and always pushing those stupid glasses back up, drives me nuts

Hahaha! I feel the same way with Paul and his beard & Mohawk fluffing ways. He looks in the mirror and fluffs it without really even touching it, over and over and over, making zero difference to its shape. It’s as though he believes he can tame and shape his beard by sheer force of will, rather than actually putting his hands on it, and it drives me insane.

Yes! She’s looking a bit stalkerish right now. I hope she calms down because I can’t handle another one of those. It’s embarrassing lol

Jozea: “If we were still in the times of kings and queens I would be a king” “I am the glue that holds everything together. If I leave this house it will all fall apart”

Josea,Paul,Vic-the most insufferable, unaware, self-delusional bunch in a long time. Josea the messiah—hahahahaha, the glue that holds them all together-hahahaha

Okay so let’s get this straight – We have Vanessa, I mean Tiffany who is turning out to be more and more like her sister in so many ways ( the hats, talking to herself out loud for strategy.) Next thing she will show is Delusions. Mama Day and James have every right to be keeping their eyes on her, just like a few others in the house have been, who don’t know Tiff’s secret. The problem for Tiff is that everyone knows Vanessa and no one is going to fall for the bat sh*t, hat crazy wannabe this Season.
And is it just me or does everyone else find that even though Frank is funny at times, I believe he is making a HUGE mistake running around talking so much. As they say Loose lips Sink ships. Week one and he is clearly Captain of the ship and not Nicole. It’s not even his HoH just his Road Trip. Won’t take people long to realize they need to start a Mutiny! – Wouldn’t be surprised if those siblings took a swipe a Mr.Pixel first.

Frank FTW with his plan to set up Jo for a major meltdown when he realizes he in fact is not the glue that keeps people together. He’s more like rubber that bounces off all the HG’s and ends up in a deep hole in the backyard.

Frank, I don’t want to like you, but I do. You’ve no idea how happy you’re going to make Big Brother fans everywhere by filling the Jo train with as much paranoia and stress as possible to create the worlds most satisfying trainwreck come next week. Freaking priceless!

What the ever loving f*ck…Corey and his friends lit a goat on fire? How anyone could 1) do such a damn thing and 2) TELL THE STORY WHILE YOURE WEARING A MIC AND ON CAMERA?!? I’m thoroughly disgusted.

He said he lit a goat on fire? N he passed the psych test to get onto this show? That’s messed up. PETA would be all over that. Who does that for fun? That’s crazy n sad n morbid.

Yeah, apparently he and his frat douchecanoes thought it would be fun to go get a goat to bring home and do everything they could to light it on fire. Ya know, like ya do on a Friday or Saturday night when boredom sets in. Corey told the story pretty nonchalantly, smirking and talking about how terrified the goat was and it makes me sick. I will say he speaks as though it never actually caught fire and makes it sound like it was his friends doing but honestly, none of that matters to me, because he was present and never said he tried to stop it from happening. Animal cruelty is never okay or funny and the fact that nobody seriously called him out on it during storytime is beyond me. Not funny, period. Bang up casting job, BB.

Cory is dirt to me now. You are right, the fact that he would even tell the story and that he never said that he did anything to stop it is just awful. Then he says how scared the poor goat was, he is just gross. There is something very wrong with anyone who commits or participates in animal cruelty. Get him the f$&:@ off the show.

My jaw was on the ground reading Corey’s comments. He is a psychopath if he genuinely thought that lighting a goat on fire was funny and/or okay. Animal cruelty is never funny and/or okay. It doesn’t matter if he was drunk. I cannot stand it when people try to use the fact that they were drunk to justify their actions. I am utterly disgusted by the lack of empathy and compassion he possesses. He is a despicable excuse for a civilized human being. I, too, cannot believe that none of the house guests called him out on this. I truly hope Corey gets f*cking nailed for this conversation when he gets out of the house. My blood is boiling over this.

Corey, needs to go. That just made me sick reading the goat story. I hope this makes TV and people know the real Corey.

BB Alias how many screen names are you going to use this season to spew hate about Vanessa again? And it looks like your obsession will extend to Tiffany as well. Hate on hater living in moms basement. Tiffany and Vanessa thank you for watching.

I think Tiffany being so emotional will either make or break her game.

Come on Tiffany! You don’t have a good poker face, even when you cover half of it. Geez Frank, how long are you going to talk to her hat? You see her chin quivering and we all could hear she’s clearly needed a tissue(s).
Paul wants to be the center of attention with his B.S! Who announces before drinking the exact amount of alcohol it will take to get them wasted?
Nothing Paul did was entertaining. Loser!!!

Yo you guys think Jozea is going home???? Opinions???