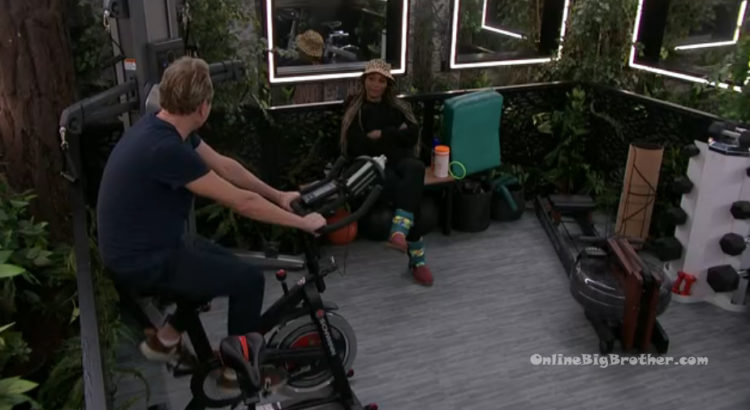 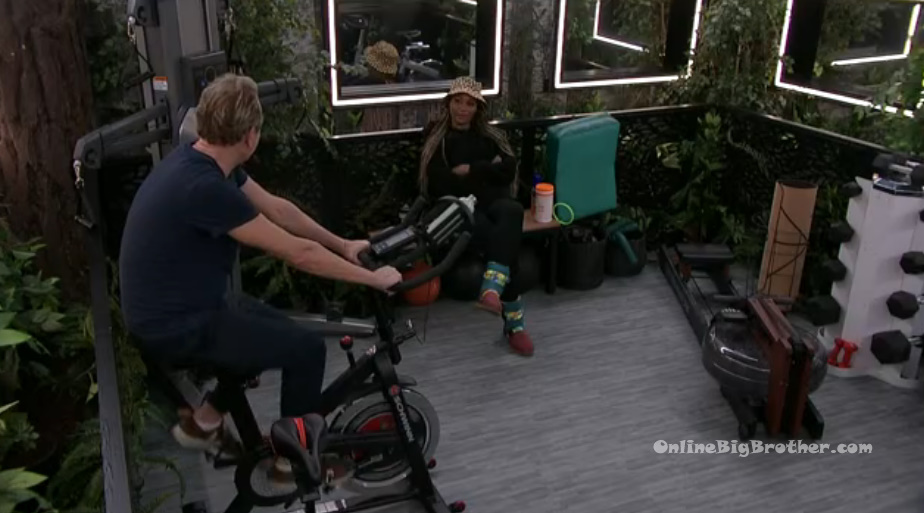 6:43pm Gym – Carson and Cynthia.
Cynthia – when I saw it there were only 2 people left in the house and not four people… so 2 more people after we leave still have to go. Carson – right and they might try to separate Todrick and Miesha. Cynthia – right so if that is ultimately what is going to happen .. I don’t know maybe people are thinking ahead and Todrick and Miesha are going to be hard to beat I think. Carson – yeah, if you have someone to put up.. if it gets to that point, you have to put up Miesha. Cynthia – Yeah, I think they are going to be very hard to beat so.. I am trying to figure out the reasoning for this little small blessing that we got. (Not being put up on the block together.) Carson – I don’t know. Cynthia – this little sliver of hope. When they could have just put our a$$es up there. Carson – yeah. And guarantee because I am sure they would have voted you out. Carson – they get me and then they get you and then they have their final four. Cynthia – exactly. Carson – so I don’t know what is going on but they’ve definitely had a lot of meetings. Its not like we.. we didn’t out smart them. As much as I would like to think that dumb and dumb did out smart them. That is probably not the case.. but now we just wait. Cynthia – no it will reveal itself. I don’t think that we were just that lucky. I just feel like it was strategic but I can’t figure it out why.. why they’re doing it.. because this is the clean house part. Carson – absolutely. Cynthia – everyone understands the assignment… put them both up. Boom, knock them both off. Carson – I just wonder if Todd is going to take one for the team so that Miesha and Todrick can go forward. Or does Todd think that he is in a final two with Miesha? Cynthia – I think Todd has always been very focused on winning. Do not underestimate his gameplay. Carson – dumb like a fox. Cynthia – like it wouldn’t even surprise me if he won. Honestly. Carson – yeah. Cynthia – like we’ve been so focused on Miesha .. like at the end just slide right on in there. Carson – yeah, Mr. Foxy! Cynthia – and everyone likes him. Carson – true! 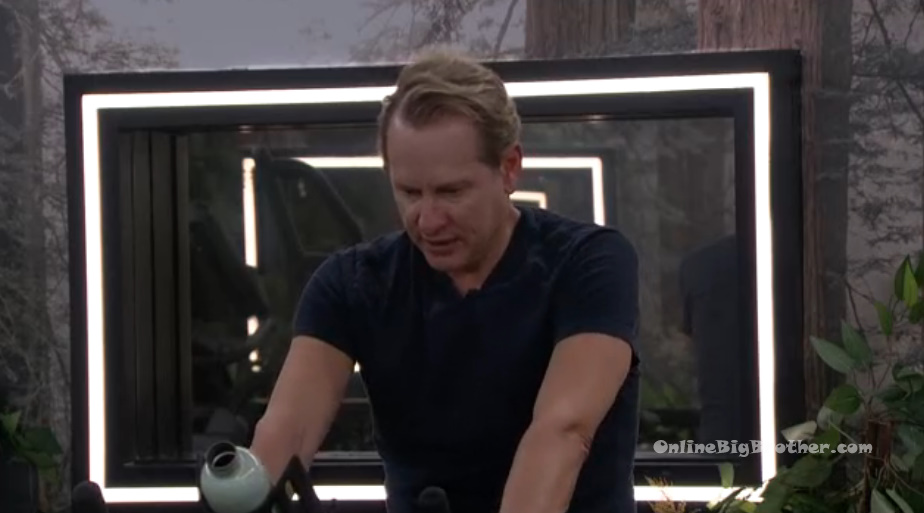 The first couple of days of CBB I thought I could get behind Todrick since he looked like a gamer then he turned into Regina George.So I go back to Carson since he has a great social game and is a competitor in comps even though he has no strategy,but it’s celeb edition so expectations are low and he makes me laugh at his cutesy drs.But after scumbagging the ally that just saved him I am laughing no more.He and his sidekick can go.So now I’m all in with Lamar cause the stupid is real.Lamar winning this season would be perfect and I just can’t stand Todrick and Miesha.

debbie
Reply to  No Name

I am so done with the CBB. Was rooting for Carson but after his dumb play I don’t care anymore. The rest of them are just plain unlikeable.

I can’t believe they were so stupid to get rid of Shanna!!!

I am laughing at the fact that Carson and Cynthia still don’t realize how they have been played and how badly they messed up by getting Shanna out. Listening to Cynthia is sad I at first thought she was some what intelligent but I was wrong. I still can’t believe Carson fell for it all. Cynthia seems OK with Carson getting voted out. I have no one left to cheer for. Shanna for AFP!

DEBORAH A HAWKINS
Reply to  Terry

I wonder how they will feel after they find out they screwed over Shanna and their own games.

Miesha won the POV. Just give her the money and end the season already

So Toddrick had a conversation with Lemar about voting Shanna out and asked if Lemar wanted to help a blonde white girl get to the end? Umm isn’t Miesha white?

there are plenty of celebs that like BB, why dont they only cast those celebs? more than half of them dont really know the game so they have no passion for it…..disappointing and makes for an awful season

I agree. Maybe they can’t afford A level celebs but I think there are enough BB fans out there that they could get some BB lovers who would be willing to compete for a reduced salary.

So Musha & Turdrick want to drag Cynthia to the end? Haha, would love hearing Cynthia explain why she deserves to win….let’s see: “ I played with integrity”. “ I gave my word “ “ I stayed true to who I am” ……. gag me!