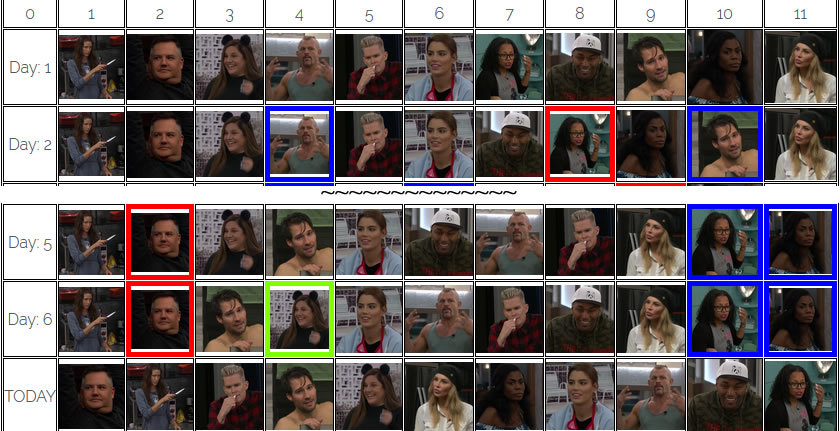 In case you missed it last night Marissa won the Power of Veto and decided not to use this. Keshia and Omarosa remained on the block. Keshia went home by a vote of 7-0. She said her child needed her milk.

Late last night Ari won the Head of Household. Sounds like they will stick to their plan. Omarossa and Metta on the block backdoor Shannon if possible.

How has this changed the ranking?

Not by much. It’s pretty static so far. For the most part the top three have been firm with Shannon/Ross holding the top 2 positions and Marissa holding the 3rd spot. Sometimes James gets into the top three and as of writing this Mark is 3rd so far today (An anomaly no doubt). The Bottom three is mostly reserved for Oamrosa, Brandi and Keshia. Metta spends some time in the bottom as well. Probably due to his willingness to go home.

Honestly, this celebrity season isn’t nearly as interesting as a regular season.

Took awhile for even diehard fans to get hooked. Once this game grabs you it has you though…even these celebs are okay to watch for me. Some of them even understand the game too!

Perhaps in the future, ‘celebrities’ will be mixed into the regular show instead of a whole different show.

Just me
Reply to  Bud Weiser

Excellent idea! I think that would be awesome to watch. Will regular people vote out celebrities? Will celebrities act like normal people to avoid being evicted?

I know everyone wants Shannon out because she’s a strong player but I don’t get all the hate. Everyone seems so upset with her. I’ve only watched the shows, no after dark, and she seems like a nice person to me. I like Ross but he’s getting on my nerves because he can’t keep Shannon’s name out of his mouth for five seconds. I think it’s unfair for them to be judging her on a conversation she had with Omarosa on day one. It’s clear she doesn’t like Omarosa and wants her out so I dunno why Ross keeps saying they have to get rid of her cause she has a final 2 deal with Omarosa.

I don’t understand the hate either to be honest she’s not a strong player and also she hasn’t really done anything but is always sleeping and people still say get her out .

What happened to Marissa’s loyality to Shannon? That sure disappeared fast.

I like how fast the votes change from day to day, I thought James was toast and then Chuck goes. I though Omarosa was history and if Keisha didn’t want to leave Shannon would of been evicted.

I think the paranoia associated with Big Brother (a lot of former house guests have commented on feeling super paranoid in the house) is escalated with the celebrities. Celebrities are a weird group anyway, now we are locking them in a house with no contact to the outside world and wondering why they are super paranoid? I didn’t think I would get into CBB, especially since I only recognized 4 of the people, but it’s growing on me. The expedited schedule stinks, but I don’t know if I could handle a whole summer of these guys. The finale should be good since evicted house guests are not sequestered and they are able to watch all of the episodes.

I like Bud Weiser’s suggestion! Add celebrities to the regular season and make sure it’s celebrities familiar with the game (would love to see Bobby Moynihan back!) and see if people would flip on a celebrity and vote them out, or if a celebrity will come down to earth and play like a normal person. Now, THAT would be interesting to watch!

Buddhistgirl
Reply to  Just me

I like the idea of giving US, the audience a vote too! Or, maybe they could give America’s favorite a weekly stipend of $5,000… That would give everybody in the house a head’s up to what America is thinking! …just a few ideas! But, I love this game!

I think Shannon’s wise to the plan. At least I hope so. I also think she’s getting suspicious of Ross, but still playing him along. She needs to play & win veto to be sure she stays.

Don’t understand the hate Brandi & Ari have for Shannon. Did Ross cause this during his HOH? Brandi was all about getting Omarosa out last week until Ross started the back door talk.

I do like the shorter season. Picks up the pace. Last regular seasons shows were like watching paint dry for 4 out of 5 days!

Actually, Ross didn’t bring up backdooring Shannon to Brandi and Ari. They were talking about it and went to him. They think they convinced Ross of the idea.

I like the show but because they are “celebrities “ they are treated different. Everything is fixed on the spot, beds comfortable, no have nots and many more things. Many of the celebrities know what big brother is. Why give them what other house guests have not had. They signed up for it. Some are playing the game and I do like that. I just wish they would play the real big brother and not special treatment celebrities. Celebrities say they are like anyone else so treat them like anyone else.

Not sure you really want to see these celebrities w/o their hair, make-up,feather beds, and hypo-allergenic pillows, The slop would not phase them since eating is not a big priority in anorexia Hollywood. They are miserable enough outside their 10,000 sq.foot mansions, no servants, no chefs,no fresh flower deliveries daily.