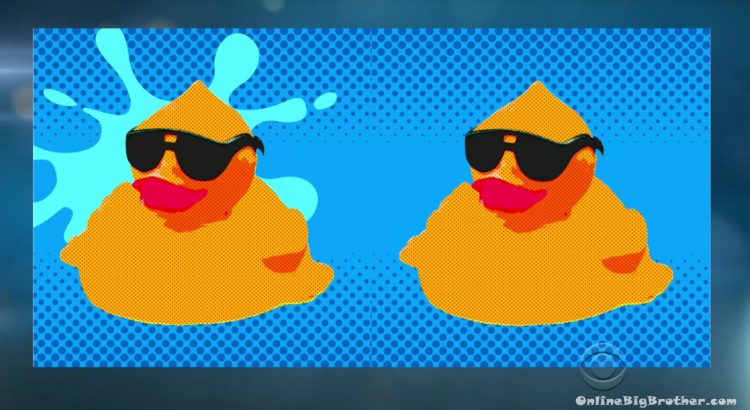 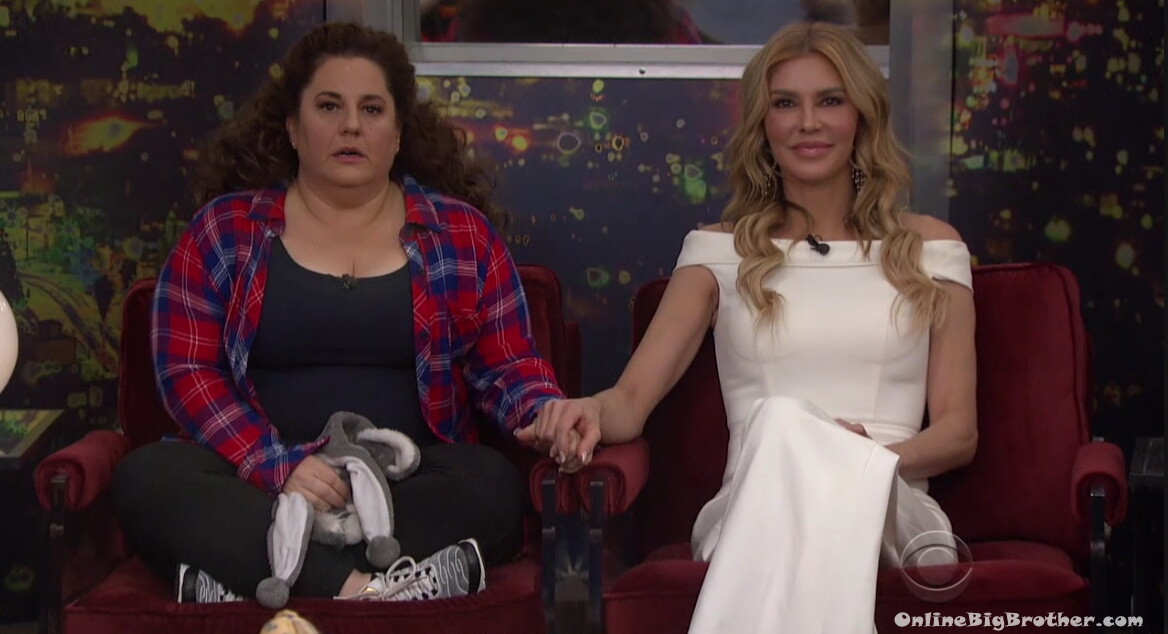 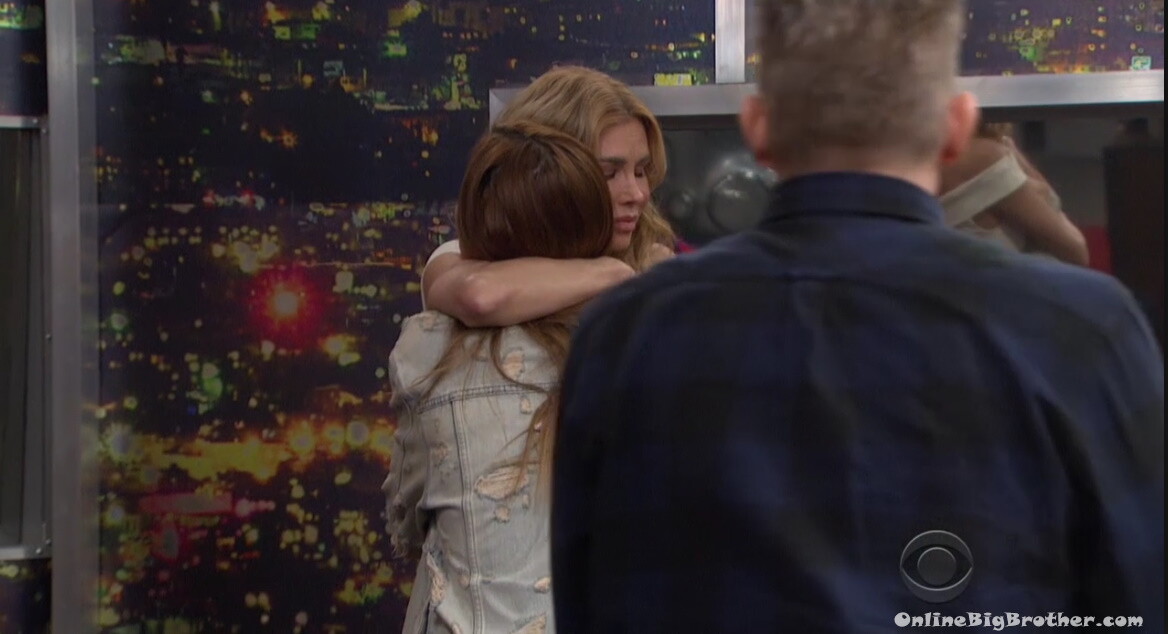 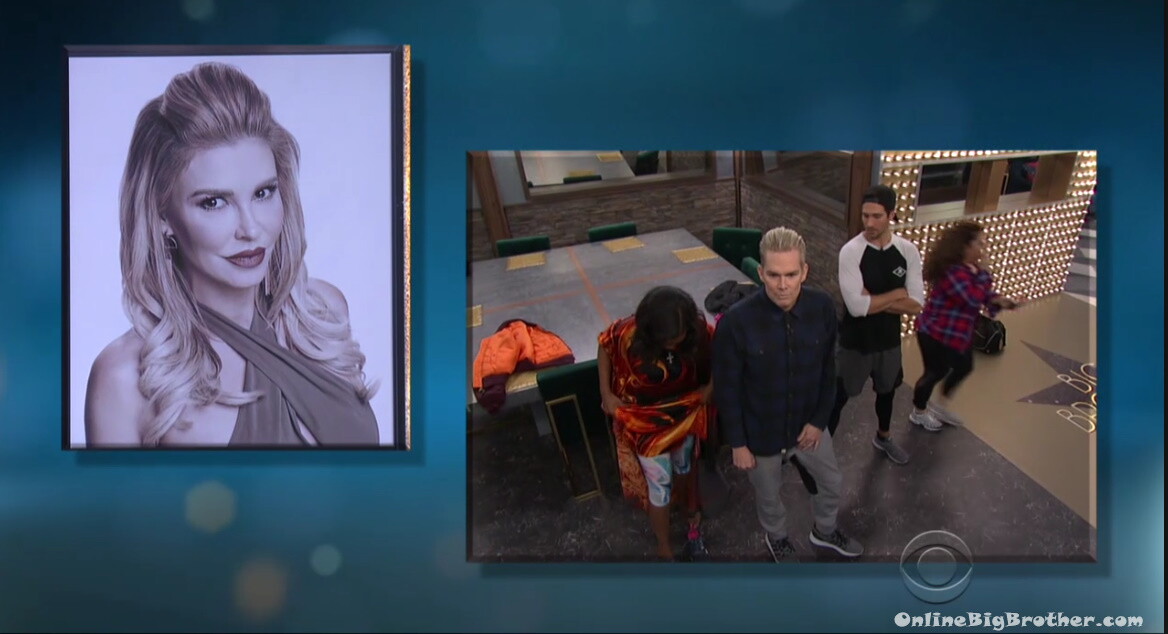 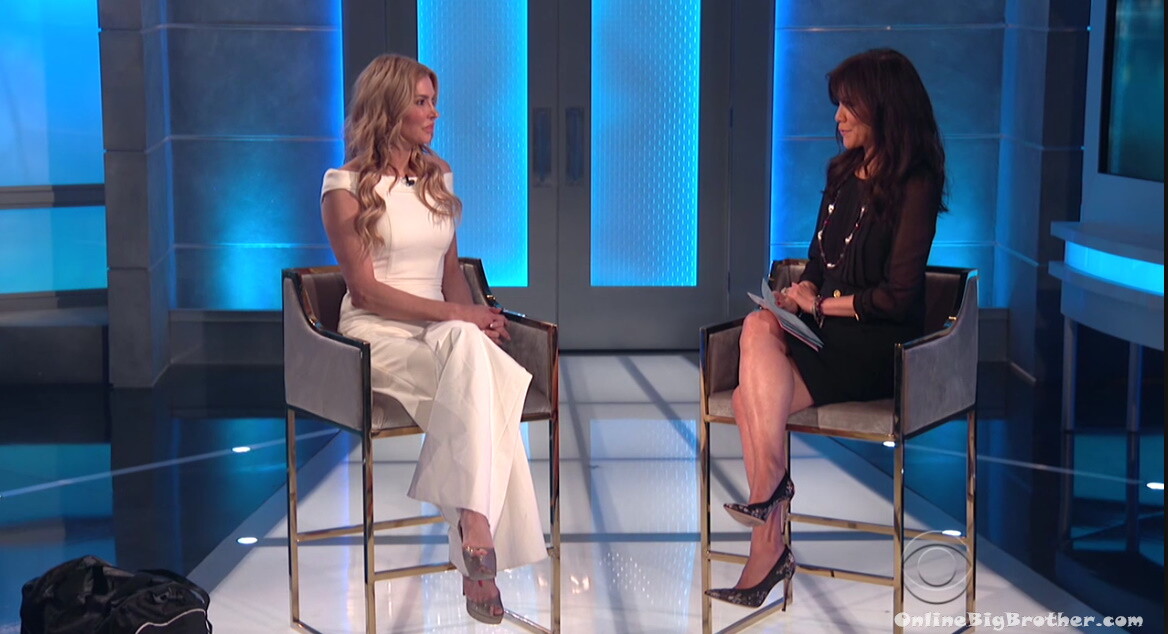 Brandi gets to see Julie Chen 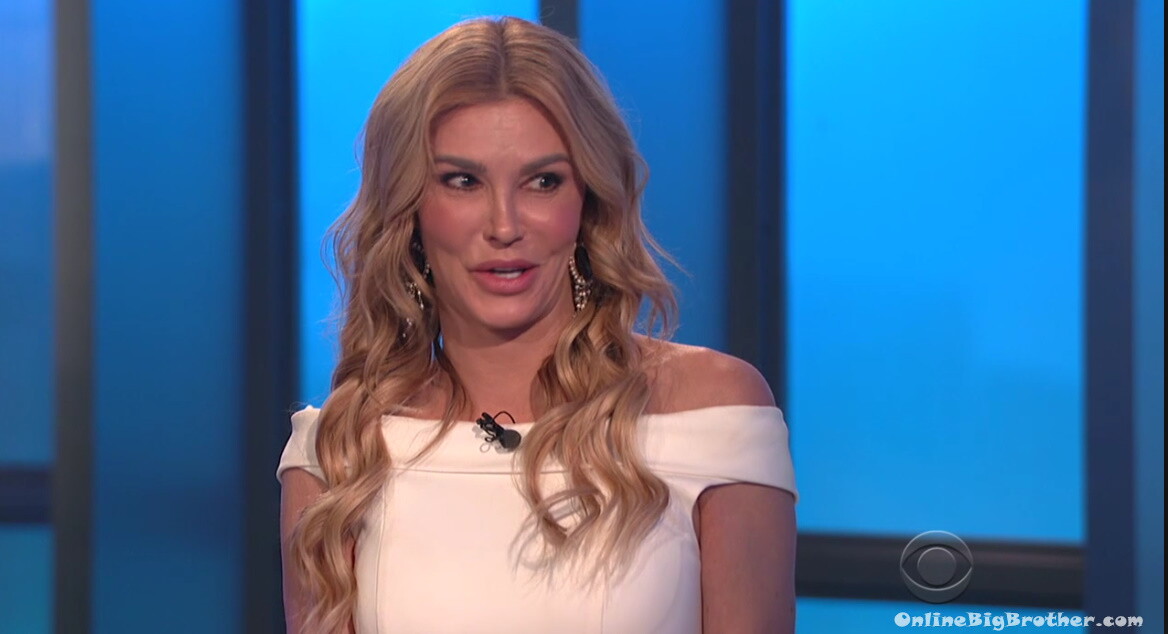 Brandi says she’s sad Ross decided to “betray me and stab me in the back” (LOL)
Brandi thinks James is arrogant and Cocky. Says he’s annoying.
when asked which is more cut throat real housewives or Big BRother. Brandi picks Big Brother. 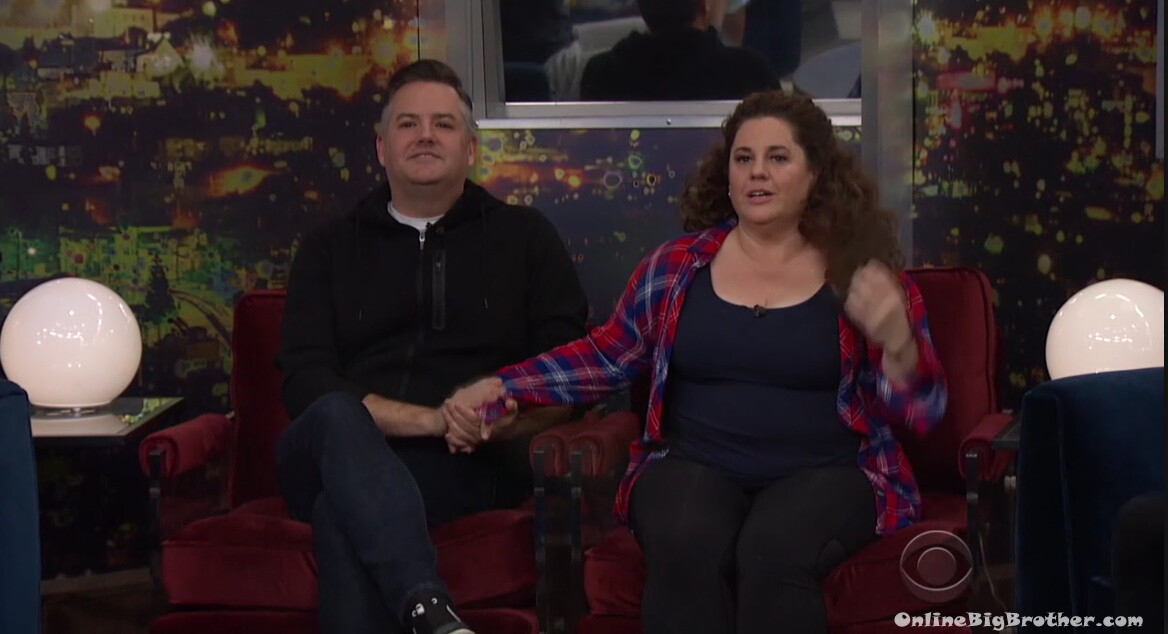 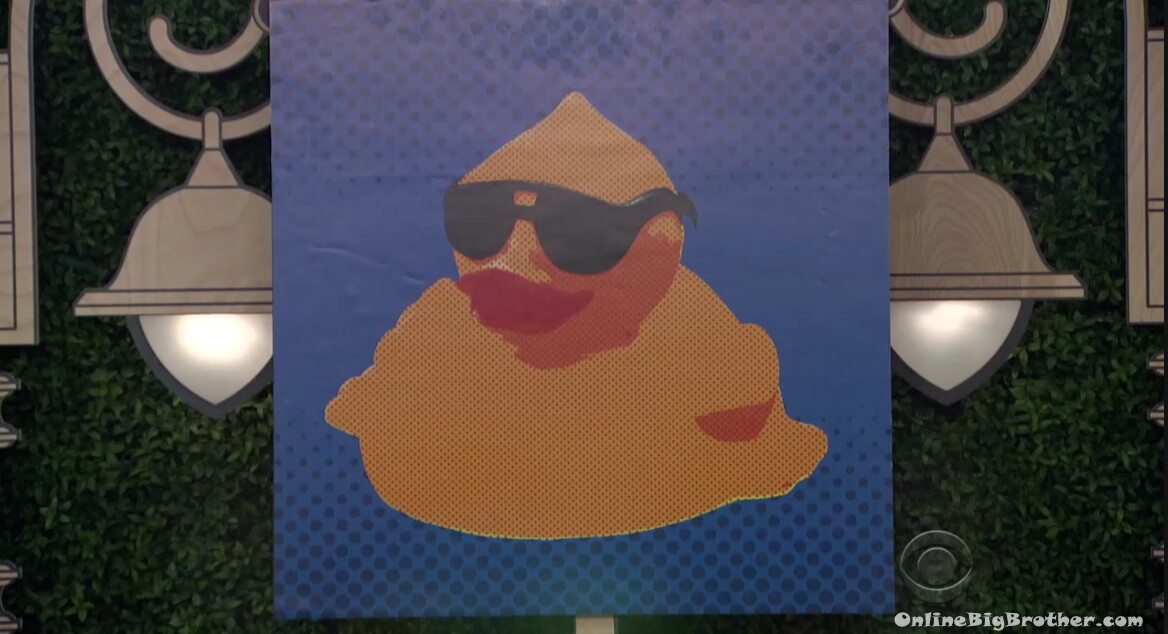 Marissa – I need it I think 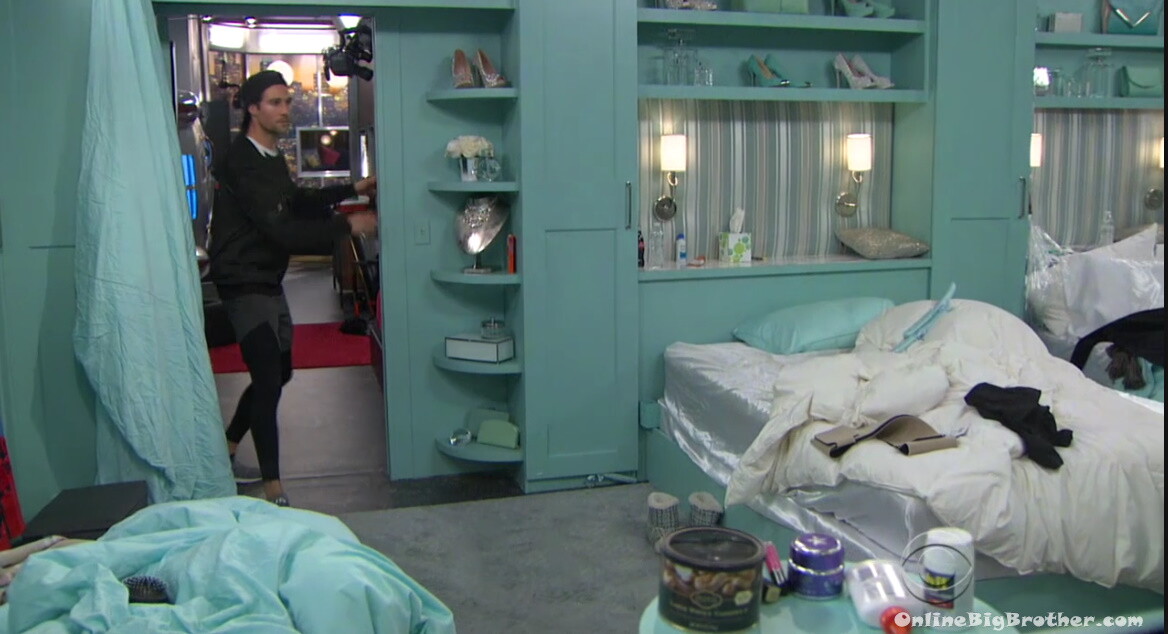 Ross wins the Power of Veto it was the DUCK! 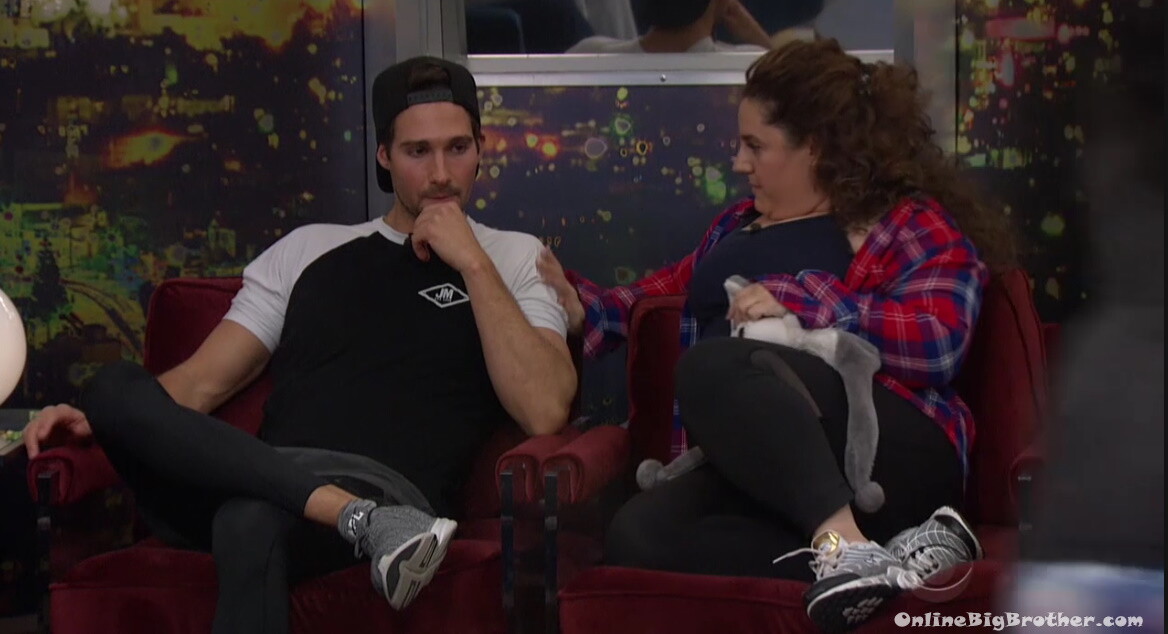 Mark – man things change quickly
Ross uses the Veto on himself. Omarossa nominates James.
James is red in the face 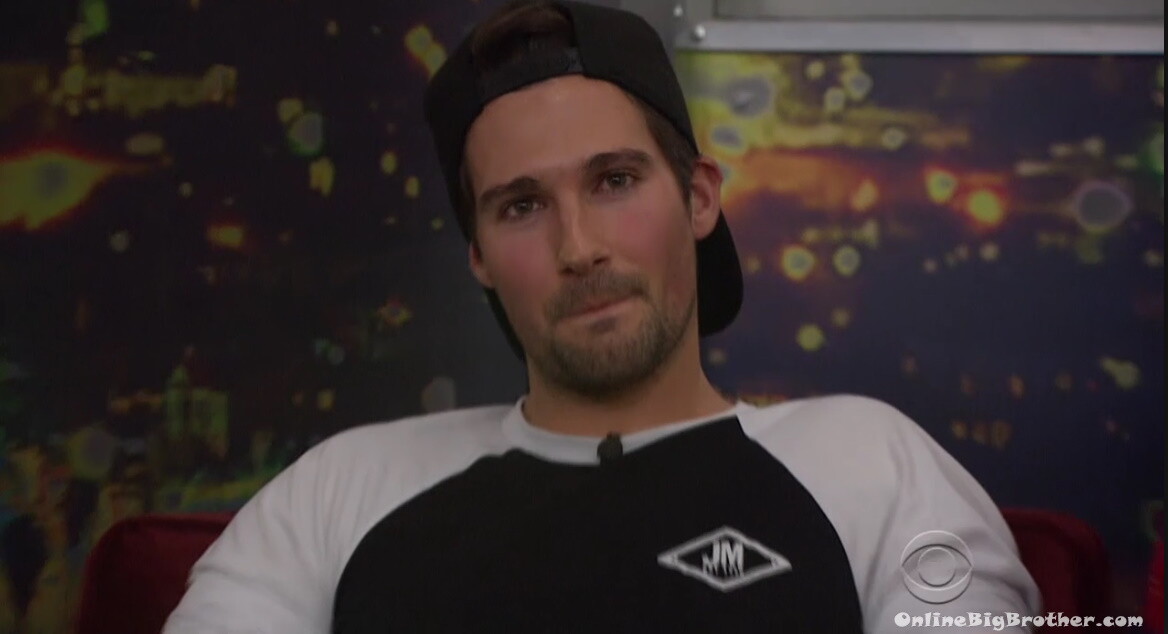 James is evicted. (in compression pants) He runs to grab a jacket but doesn’t have time. 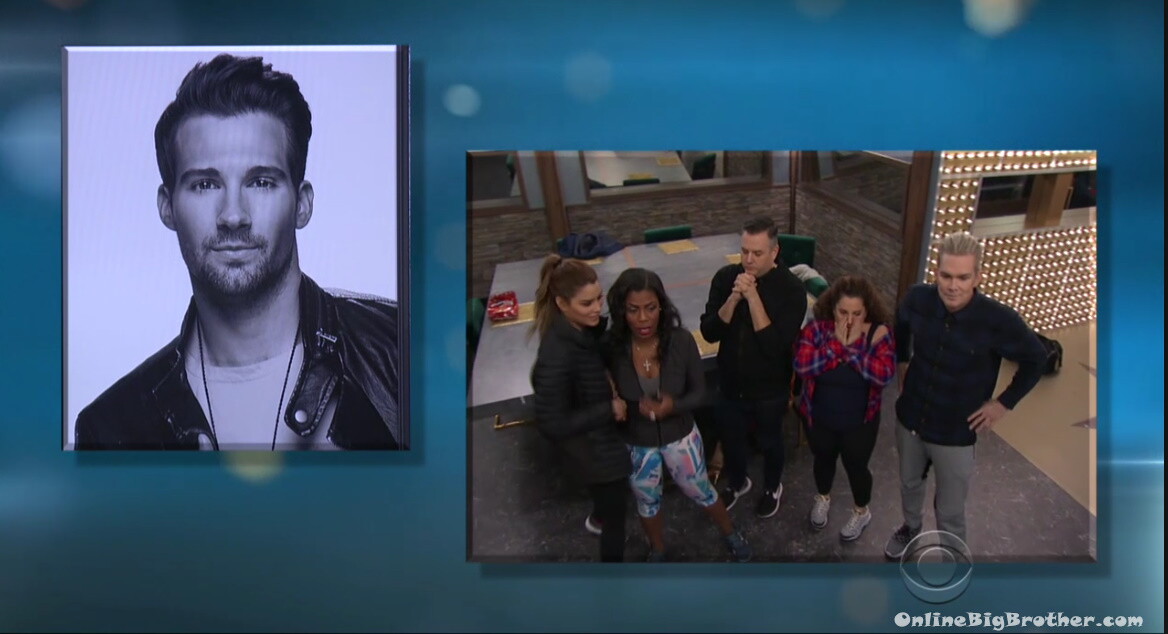 Black and white
Omarossa claims James was the BIGGEST target in the game and she got him out.. keeps repeating it 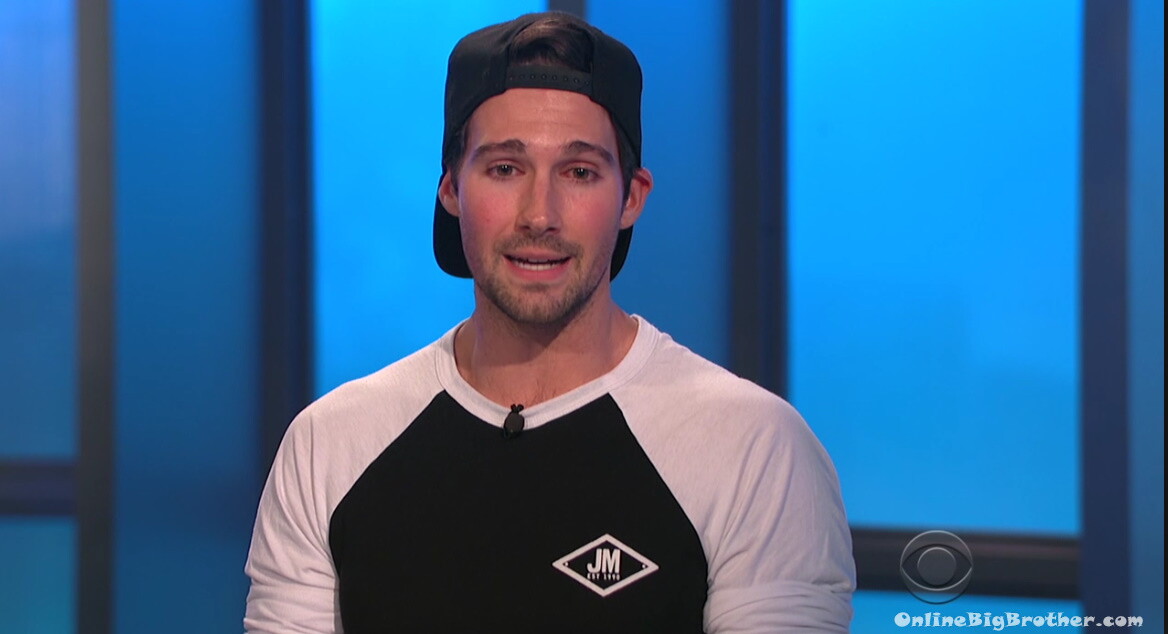 Julie says James is a competition beast.
James thinks Ross has done the best so far.

This “most powerful” Head of Household gets to evict 2 people. 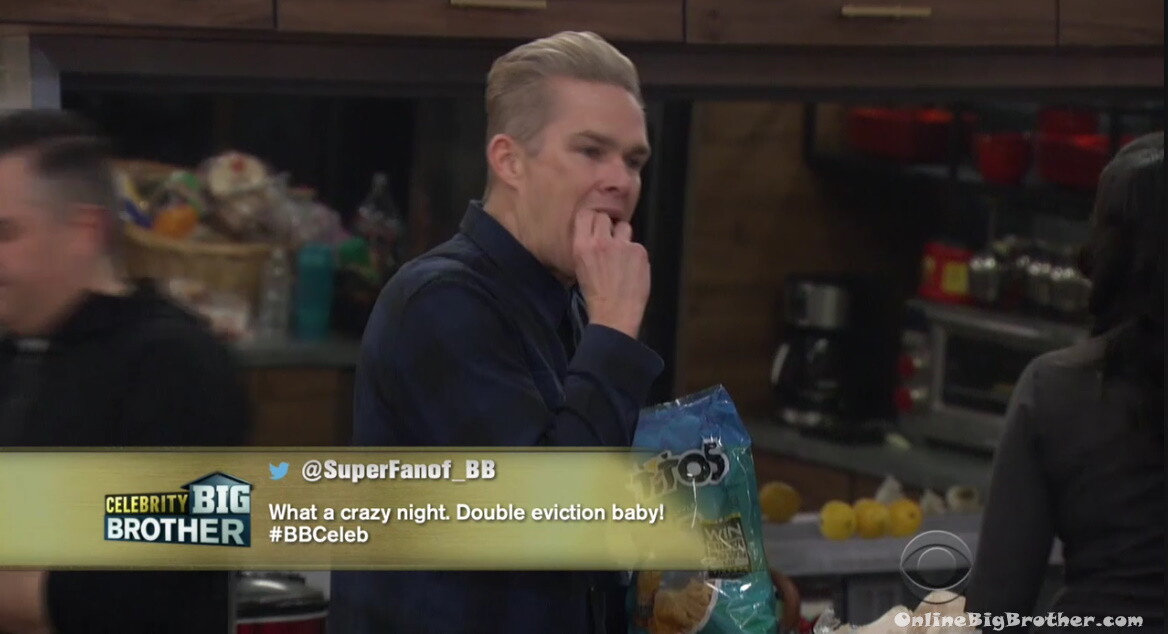 Mark – that’s gnarly (you know Mark has grown on me.) 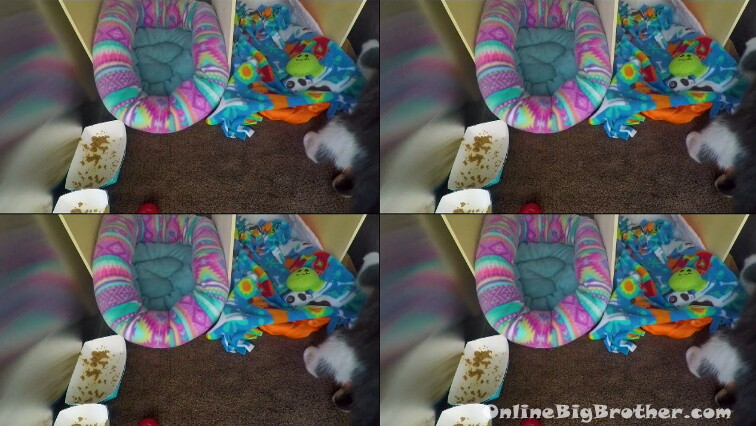 Feeds are still on pound kittens .. I think the HOH is happening but I’m not sure.

I’m kinda glad that both James & Brandi are gone. Same competing egos. And I’m afraid Omarosa is going to be dragged along at F2.

At this point I’m rooting for Ariadna to win.

Shannon sucked at this game. Surprisingly. I had high hopes for her going in, but now I don’t even like her. She keeps blaming everyone else for messing up her game. Did it yourself girlfriend! Good thing you are cute, likeable, and save African animals, that’s what might win you AFP, not your game.

Oma is the new target for sure. They better get her when they can or their luck for sure will run out.

I do need to ask this in case i’m just reading things wrong:
Mark and James said getting rid of Omarosa over Brandi would be personal on Ross and Marissa’s part, not game. This was the stated reason for nominating Marissa instead of Omarosa. Wasn’t getting rid of Brandi personal on Mark and James’ part? Who was going to vote Brandi at the end? What was Brandi going to win in comps?
Yes, there’s a strategic element in breaking a duo… but going after the weaker in the duo didn’t make sense. So it was personal. Listening to James’ goodbye message to Brandi sort of cements that.
Omarasa saying repeatedly she took out the biggest target tonight. She wasn’t aiming for James. She had no idea what the veto would be. That was a real crack in the justification armor, and in a way justifies the two original nominees reason for wanting Omarosa out.
Am I way off base about these impressions?

yet look how derek did it foir thw wins~!

I think Ross is a biggest threat all around. He is more likely to win the game. So Omarossa did nominate a threat who won veto, took himself off and then she nominated the next biggest threat, James.

You think the weaker of the Brandi/Ari duo is Brandi? They thought different and so do I. Her danger is the drunk talk she does, telling secrets that hurt others. James is a challenge winner and the stronger of the boys duo. Oma wants an all girl final so James was most certainly the next major target.

You are right, splitting the duos was mandatory and don’t forget that voting Brandi out makes no other enemies in the house. Her general nastiness and unpredictability made her an easy out for everyone including Ross.

Had James been able to listen to Mark’s wise counsel, he would have put aside his (hurt) feelings, seen the danger posed by the Ross/ Marissa combo, and voted game, instead of emotion. His unwavering, laser focus on getting rid of Brandi, blinded him to the fact that he needed to be checking his own six. Brandi was no threat to anything but his ego. Marissa, on the other hand, was never going to sit still for anyone but Ross (or possibly herself?) emerging victorious. Big Brother demands of each HG that he/she have the wit as well as the skill to play the LONG GAME. James counted on winning the final HOH and never entertained the possibility that the HOH he threw to Mark would be his last chance to even stay in the house. James was surprisingly naïve/ stubborn, even when Mark spelled it out for him. And so it was that James no sooner got rid of Brandi than he himself became a resident of the chopping block. He kinda reminds me of Cody, from last season, who got off to a great start, but couldn’t see past personal vendettas. Getting Brandi evicted probably doesn’t feel nearly so important, now, under the circumstances.
Sidebar: I actually watched The Amazing Race this season because of Cody and Jessica. Once Cody learned to listen to Jessica (something he never did in the BB house), they were unstoppable. Congrats to them on their million dollar win- Okay maybe only 500K after taxes, but you get my drift…

Now then, back to our celebs: Hang on tight Ari! It’s going to be a bumpy ride! Ross and Marissa are not your allies. In fact, Ross has managed to maintain his grip on the hearts and minds of all but Omarosa, who is on to him. She knows her worth (and it is considerable) to everyone in the house. Ari, if you can get rid of Ross and Marissa, you will have the numbers to win the game. You and Mark have won comps and are well-liked. Perhaps a 5-10 minute alliance with him would serve your best interests. Omarosa is still after Ross (and for good reason), so that may be helpful to you. In fact, how about you, Omarosa, and Mark make it your mission in life to finally send Ross and Marissa packing!! Otherwise, this will have been The Ross Matthews Show, written, directed, produced, choreographed, and starring Ross Matthews.
Nothing against Mark, but…

Completely agree with you, Talker.

Agree with you regarding Cody listening to Jessica overall, but don’t forget when Cody came back in the house for round 2 he listened to everything she said, including strategy and that backfired big time and Jessica wasn’t the best at the emotional intelligence side of the game either….So, for the 2nd half of his game, he did listen to Jessica, in Cody’s defense.

I guess we just remember them differently. He didn’t listen the first time around and, when talking to Julie, admitted he was “the worst player in BB history.” He and Jessica even laughed about it, BOTH times. When Julie told him he would have a second chance, he pledged to listen to Jessica. I became hopeful that he would win the “battle back.”. When he did, I thought we might see a different Cody. We did, but only in the sense that he was less overtly aggressive. Jessica had been doing well without him b/c she understood what needed to be done. She had figured out who needed to go in order to ensure their safety. I vividly recall Cody and Jess sitting outside, looking across the yard at the people she knew very well HAD to be nominated. Cody, in his infinite wisdom (NOT!!), sat there and TALKED HER OUT OF IT. For love of Cody, Jess deferred, knowing it would be the end for her and Cody. She was the smart one in the house and even a competition beast. He brought her game down because she always deferred to him. She still does, but he has learned to place more trust in her opinions. Now, he listens. Then, he did not. Not even when he got a second chance.

James forgot about the risk of seeking revenge:

“While seeking revenge, dig two graves….one for yourself.”

I am glad Ross won pov but to bad the couldn’t get Omarossa out I hope no one take her to the final 2.

That HOH was rigged. If Omarosa didn’t win, she would have been sent home and then the Sat show of her talking about the White House wouldn’t mean much. There has not been one show that they did not talk about her time in the White House….ugh CBS let it go already!

Its funny Ombrosa talks as if she was the ultimate insider within the WH….She was on the outside looking in at best….She is such a douche……14 years on TV and counting

blah blah blah, I don’t believe one thing that Oma says about the wh…one day she has his back 100 % the next day she bashes him…pick one Oma or are you tailoring your slander for your future book, that I won’t be purchasing btw. Your above every1 & everything, even wh rules, but your entitlement screwed you this time & you got sacked. Walk away with a little pride! Shame on you CBS for staging this crap for ratings smh

Can't wait for survivor to start

At this point Omarossa and Mark might be the 2 safest people in the house… Who wouldn’t want to sit next to one of them in final 2? Better yet who wants to sit next to Ari, Ross, or Marissa in final 2? They all have different things that will make them hard to beat. Either way anyone in the house would win over lady O and Mark.

UGH
Reply to  Can't wait for survivor to start

Hope Oma isn’t on survivor too

@ UGH- There is no one in this cast that I can even imagine on “Survivor.” If three weeks in a tricked out house with every convenience was too tough to take, 39 days without so much as a pot to piss in would result in a total mutiny. Think of it… The season ends after maybe 3-5 days (I’m being generous) with: NO SURVIVOR!! : – )

I don’t think these celebutards are capable of being strategic or deductive.
These are the morons that have convinced themselves chatty cathy is the biggest threat in final two…

May they never do Celebrity Big Brother again! Players quitting, Omarosa stays to be able to gossip like she is such a political insider, lousy players, and boring subplots. They truly were looking under rocks for this group. Ice Ice Baby?? Sugar Ray?? Please!! Guess you have to fill airtime when your opposite the Winter Olympics.

May they never do Celebrity Big Brother again! Players quitting, Omarosa stays to be able to gossip like she is such a political insider, lousy players, and boring subplots. They truly were looking under rocks for this group. Ice Ice Baby?? Sugar Ray?? Please!! Guess you have to fill airtime when your opposite the Winter Olympics.

maybe neve they do regular that quits to!