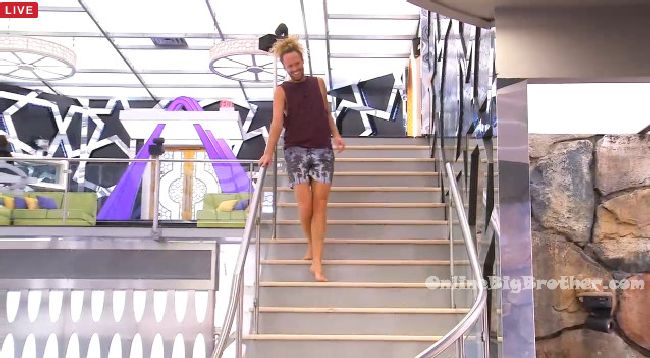 Tim won a Gift Card to The Brick

– They played some kind of reward challenge.
– Tim plans to give it to charity because he can’t use it.

When the live feeds return – Kelsey, Jared and Raul are out in the hot tub room. Inside the house – Tim asks is there like a charity or something they could give it to? Like some kind of half way house or charity? Joel says yeah. Tim says I’ll ask they if they can just give it to them. Nikki asks what are you going to get? Tim says I’m not, I’ll give it away. I can’t get chairs and ship them. (Tim won a gift certificate to The Brick – Likely 5 or 10K) 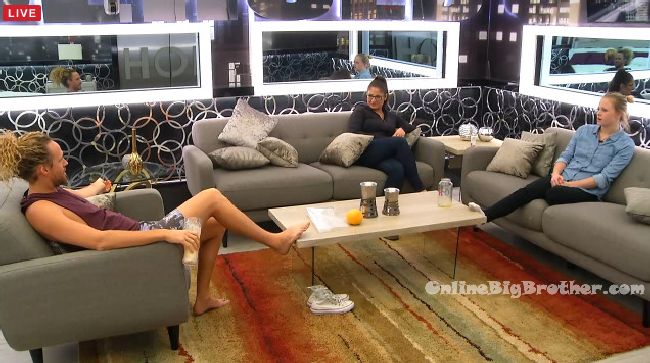 6:10pm – 7pm HOH room – Casssandra says its his own fault that he’s leaving this week. If he didn’t act like such an a$$hole this week he wouldn’t be leaving. If he says one more thing… I know he’s going to jury but I don’t care.. I’ll say something to him. Cassandra says we’re living with a pack of idiots, one circus short a clown. Maddy says when I put him (Raul) up I wanted to say Mitch misses you … go see him. Cass says no you did it good, don’t ruffle any feathers. Tim joins them. Maddy says talks about Rual and says I’ll call him out, I don’t care I know he’s leaving. Tim says the shows over no ones watching you any more. He is quite entertaining but he still could have been a nice person. Maddy says he’s mean and lies to everyone’s face. Cass and Maddy discuss how many people and weeks are left. Cass says if there’s a triple there will only be 7 people left. Cassandra says Kelsey isn’t that smart. Maddy says she’s been on the block 3 times .. she is clearly supposed to go. She’s an idiot. Cass talks about how Jared was livid when Kelsey kissed Nick last night during the game. Cass says that Jared said “I’ve punched bros for less than this!” Keeping Kelsey here weakens him. Maddy says I love the four of us. (Maddy, Ramsey, Cass and Tim) Maddy asks have you talked to Tim about it? Cass says yeah, he loves it. HE loves you and Ramsey. (This morning Cass and Tim were just talking about getting Maddy and Ramsey out soon) Ramsey joins them. Cass leaves. Maddy asks Ramsey if he’ll shower with her. You’re the kind of guy that talks the talk, but doesn’t walk the walk. Ramsey says he would because the cameras would be on them. Its different in this house. Maddy keeps pushing for Ramsey to have a shower with her. He says he won’t here in the house.

Want to watch the rest of big brother Canada 4 & all of Big Brother 18?
Sign up for the 6 month plan with HideMyAss VPN.

Okay Kelsey, the amount of times she says, “I know Maddy doesn’t like me” is so annoying because we all know you don’t like her. She’s a nasty piece of work (Kelsey). I actually think Maddy plays without emotion just like she does with her sleeping arrangement. Every time someone target these 3 turds they automatically insult everyone’s intelligence by saying it’s because of jealousy. No, it’s because they’re playing the game smart. Cassandra is dangerous and needs to go soon because her neck is getting fatter and it’s not good for her health. The (every season there’s a ‘persian’ princess), most annoying thing these women say because there’s no Persia anymore – it’s called IRAN.

you really need to find a hobby

You’re here too bud? You reading these comments means that you need to find yourself a hobby just as much as the last guy

You’re an asshole. Were you not the one running your mouth about “Now waits for the haters”….Did you mean you?. Fucking idiot, other people can comment here too eh and not have to worry about being pounced on because they disagree with you . Its posters like you that make people not want to comment and the reason why I barely comment here anymore.

Yes cut the head of the three and make more sets of three.

telling someone to find a hobby upset you that much? really?

??? J-Dawg didn’t disagree with me! He didn’t understand my “find a hobby ” comment. And that’s OK! i thought it was cute, and i was being silly because he had “dawg” in his name. I’m a dog lover, ive had dogs my whole life”!
Sorry for the confusion MapleSyrup! Please don’t be angry! you should be like your username: “Slow like Honey, Heavy with mood”!

What makes me LOL is you completely ignore the original comment, of slut shaming a girl and calling people turds.
If i watched a tv show or a game and felt angry and hateful towards the people in it, i would stop watching and change the channel! I mean , why torture yourself?
Should i just reply calling people assholes and fucking idiots, so i can get an invitation to the OBB Haters Club?

check out this reply, it’s like i read some biblical lines to Linda Blair!! What’s next your head does a 360 and you start spewing pea green soup?

someone who knows and watches the feeds

ramsey is so dumb. maddie plays him like a perfect prostitute, she cock teases him with cheap compliments and big promises (knowing full well what he won’t do), and when it comes time to pay she has a temper tantrum and cock blocks him. then when she needs him again and feels like he’s pulling away she’s sweet with her cheap compliments, lite kisses and promises, doing it all over again.

Ohemgee
Reply to  someone who knows and watches the feeds

Don’t have a stroke over it, lol,Relax, take a deep breath!

everyone is relaxed, just be cool. You seem to be replying negatively towards many people. it’s just an opinion

omg, here we go again. *facepalm* i guess i should’ve replied with the words, “dumb”, “prostitute”, and “cock” and throw in the word “fat” sometimes,then i wouldn’t be blamed for being negative! lol *facepalm*

i couldn’t agree more with you that the language used is just inappropriate. i just think these comments are a way for people to feel involve in the show and from the looks of it, you continue to bash on others’ comments and stop them from wanting to share their opinions.

Well i don’t hold the position that the language used here is inappropriate, so how are you agreeing with me?
i also haven’t stopped anyone from giving their opinions. And i only “bash” the comments that reply to me, like how i’m bashing your latest reply to me because it’s full of fallacies!!

“Gather up some straw boys and girls,…the Wizard’s not giving out brains tonight”!!

I Cass getting fatter?

WoW, you people are obsessed with this girls weight. Go find a hobby!

Wow I hate that Raul could be that type of person. I love how Ramsey dealt with it. Don’t give a bully power. I can’t believe people are like that. We’re all born the same way. It really hurts me, even though Ramsey didn’t take it as a big deal. It is kind of rude

Why are people disliking your comment? I’m really confused. I didn’t see you say anything negative or out of the ordinary. Aside from how naive you are. I rated your comment up.

Ramsey is a gem of a guy. Maddy on the other hand…is bi-polar. He deserves wayyyyyy better.

I couldn’t of said it better

if you didn’t know the answer is NONE…? ur part of the problem

Careful! You may be accused and blamed for being to negative! Yep the irony is real!

The amount of time Cassandra uses the term HATE to manipulate, or from delusion is disgusting…

Jared is such a sweetheart! I feel sincerely bad for the way he is being treated by Kelsey. Let’s go Jared and Ramsey!

I can’t wait for Ramsey to win HOH and go full Jihad on these infidels.

I always enjoy it when Tim stomps on the true outsider and misfit, Joel. It shows his king-of-the-misfits persona is merely an act. People are stepping stones.

Going from memory here, but I think this is a perfect transcript:

Kelsey: If you were really confident in your masculinity, Jared, I could blow a hockey team and you would be totally okay with that.

Cassandra: Hey, Kelsey lets drop this loser and peek at boys in the shower.

Raul: You bishes betta wait for me!

And i will pounce or bash anyone who replies to me with attacking a straw man.
I’m going to call out those fallacies and arguments of ignorance.

Has anyone taken comments about a reality show on an online blog this personal before? Must be a first for OBB.

That last video….
Maddy is so thirsty and disgusting.