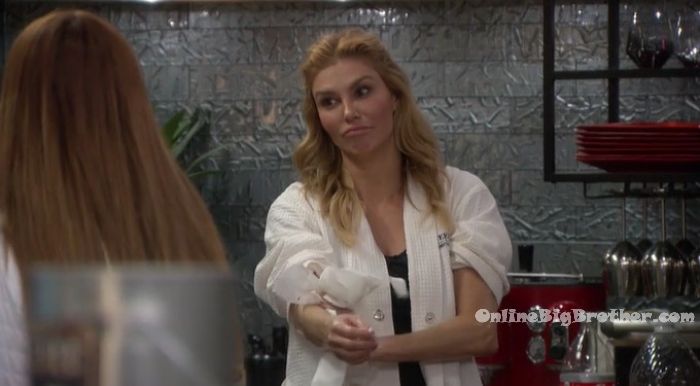 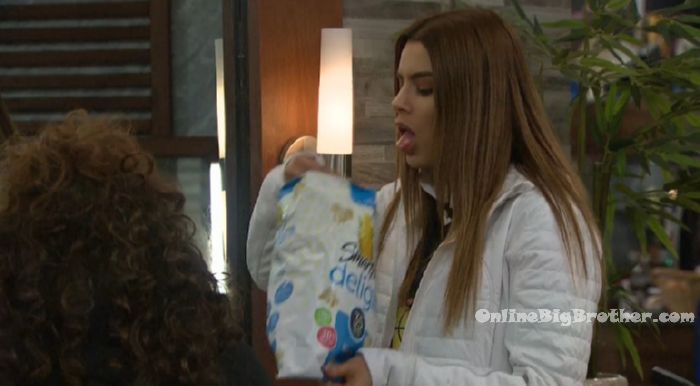 8:56pm The live feeds return from being blocked after the competition. Marissa and Ari are in the bathroom talking. Marissa – you know when you have that friend that can’t help but sabotage themselves. That’s her (Brandi). I don’t want to say anymore ..because what I am saying is ugly and I don’t want it to be. I’ll say it to you on the outside and we’ll go hahaha but not in here on camera. Ari – I knew she was going to do it. Marissa – such a dumb move. It’s going to send her home. But I got you boo… anything I can do.. Ari – we’re the same. But you cannot do that when you’re on a team. Its not a team. We were talking about friendship… Marissa – that’s why she has 10K in the bank. She doesn’t think. 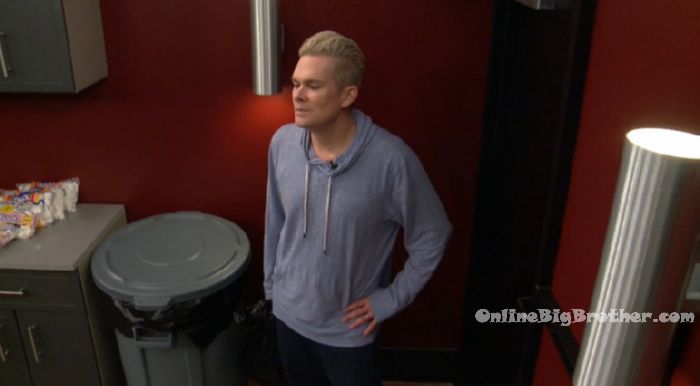 Storage room. Marissa and Mark. Mark – I think she (Omarosa) is going to put Brandi and Ross up. Marissa – yeah me too. Or me and Brandi. Mark – Metta and I are going to the finals I guess. Marissa – can I tell you… Who voted for Shannon? Mark – Omarosa did. Marissa – no. Mark – you don’t think so? Marissa – maybe to stir trouble. Mark – maybe Metta did. Marissa – nope! I know he didn’t. Mark – who would do that and just waste their vote though? Marissa – someone who wants their vote at the end. 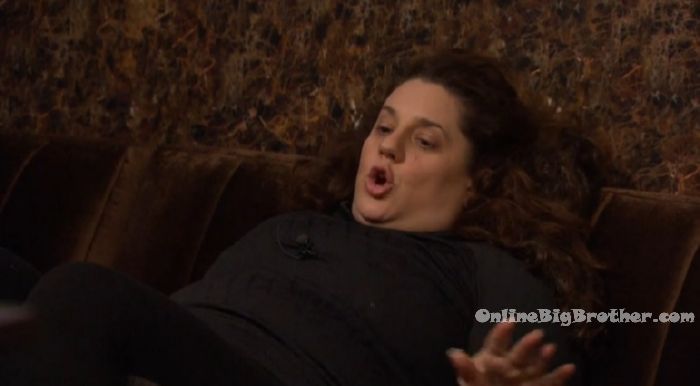 Lounge room. Ross and Marissa. Marissa whispers something to Ross. Ross – lets not bring it up. If its me and Brandi, then we use it. Ross – you need 3 votes. Marissa – you have me, Metta, James, and Mark. You’re fine. Your best case scenario is you and Brandi. Ari joins them. Ross – we’re going to act like normal. Ross leaves. Ari to Marissa – I’ve been taking care of her (Brandi) and now she does this? Marissa – it f**ks you. What’s probably going to happen ..Omarosa is probably putting me or Ross up or you and Brandi up right. So we’ll pull you down. Ari – if I go, its okay. Marissa – I will fight for you. He(Ross) is already counting votes. He’s like it will be me and Brandi. Mark would vote for Ross. James will vote for Ross, Metta will vote for Ross. Ari – do you think she is going to put me up with her? Marissa – if she did Brandi would go home. She is going to be the next to go probably. And that’s who’s in her sights. Ari – I feel bad because I told you guys but I felt like I needed to tell you. Marissa – we’re not going to say anything because its not going to come up. Why would she do that, it makes no sense. Ari – so selfish. She only talks about winning and money. When Keshia wanted to leave oh my god that was horrible. I thought she was in with us. Marissa – she is but she is playing a different.. Ari – she’s not even with us. Marissa – Like I am going down with the ship. Maybe it was because she felt bad for her. Maybe it wasn’t about the move. 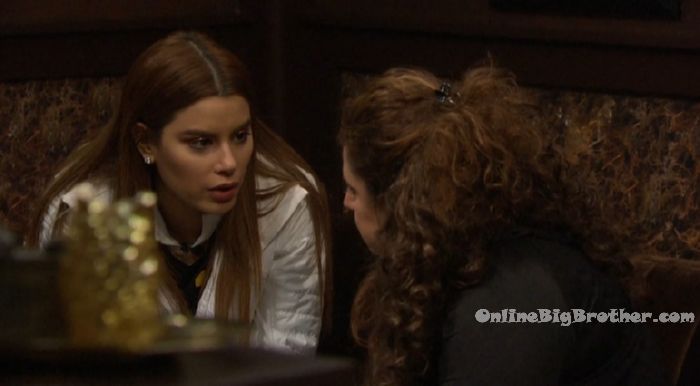 Bedroom – Marissa and Omarosa. Omarosa – who voted for her (Shannon)? Who would do that? Metta, I think it was Metta. He was up with her until 3 in the morning. Who would not waste a vote but… It wasn’t me. Marissa – it wasn’t me. Omarosa – it might have been James to stir it up. Marrissa – that’s what I was thinking, someone did it to stir.
` 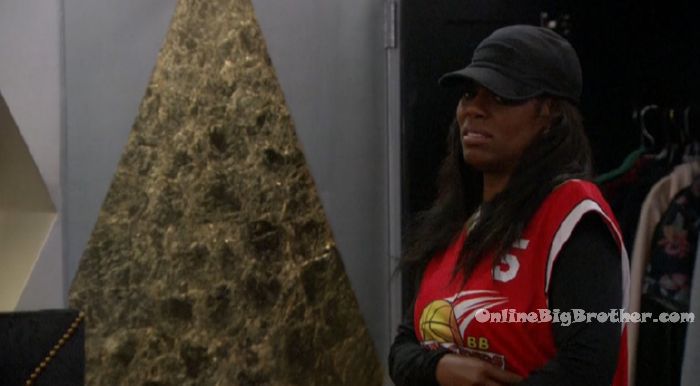 James and Omarosa. James – lets not talk too much tonight. Omarosa – I really want to talk to you before I make some decisions. They’re going to offer me game. James – they all have strong alliances and I don’t to be to be frank. Omarosa – so you don’t have a final 4 with them? James – no. Omarosa – then lets talk later. 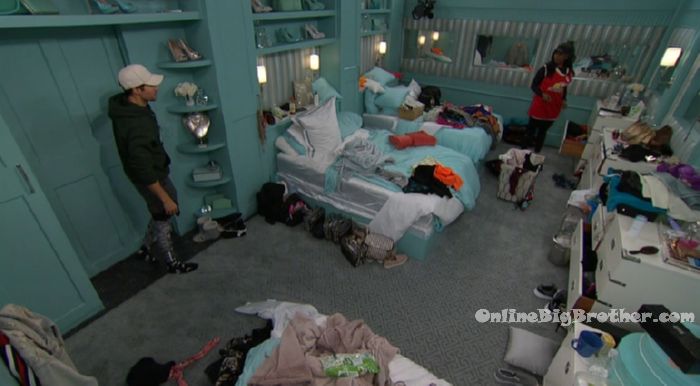 11:25pm Mark washing the dishes. Mark to James – I think Brandi is going to be up on the block. Brandi and Ross? In which case Brandi is ti 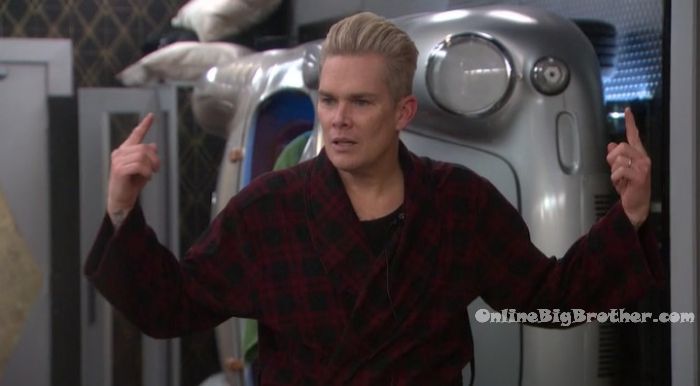 What did Brandi do?

she voted for Shannon to stay without asking

Oh no…how dare she vote with out asking. I never understood that, they are each individuals so vote how ever you want. She shouldn’t have told anyone and then it would have been blamed on Metta or Omarosa.

Right? “You don’t do that we are a group we vote as a group….. ” after they made that comment I thought to myself “did nobody explain to these people that in the end it can be only one winner?” It’s funny to watch these so-called super fans actually play the game not understanding what the end result has to be. 1 winner. Not 4 lol.

Sympathy vote for Shannon after all agreed to vote her out.

She voted for Shannon.

I could never figure out what the big deal is if one vote gets thrown to the person leaving.

pandering for a jury vote. almost like what josh did in his goodbye message to ruin paul in bb19

What Josh did was genius. Paul used him for all his dirty work & Josh beat him at his game for the win. wtg Josh!

I don’t think so. It just means that voting who(m) every out wasn’t your choice and you want to show that you have loyalty. If you call that pandering you should look up the definition

So Brandi don’t have the kiss butt gene. Really.
What did she think that vote for Shannon was. Lol now Onmorosa got HOH
She don’t want to use the gene. Funny people. I get the not wanting to be team OnMo,
But they are the ones preaching it’s only a game. So who bringing the Drama?

Personal Opinion:
Spotlight forces winner to use veto. This means no ‘i choose not to use the veto’ scenario.
Fun feeds.
VIP they can use once, twice or NOT AT ALL.
the not at all part means it’s a waste. the only time this vip has appeared in any shape or form (to my knowledge) was in bbcan season 3. though the not use at all part wasn’t added to the description until 24 hours after voting began. it was a dud.
diamond? Does anyone like any of these snoozers enough to actually give them a diamond veto? I’d have a hard time giving them a cut glass butt veto, let alone a diamond veto.

With Omarosa being HOH, this should be a very interesting week!!

Well they should of kept shannon she was a nomber for them .

I hope one of the obese alliance goes next. Ross and Marissa are so gross and like to pretend they are nice people but really are vile human beings. So gross to have to look at as well.

I hope Metta wins the whole thing. He is the only actual “celeb” in there. He a World Champion. What have the others done? Yeah thats right. Not Celebs.

What is wrong with you?!? Shaming people make you feel better about yourself?

Weren’t several of them on Dancing With The Stars? I guess if ABC considers them as stars, then CBS can call them celebrities.

Something is sadly wrong with your psyche to feel you need to be so hateful.

This shows over in a week, when’s the pace going to pick up?

I’m so angry this is only 3 weeks. This has been amazing gameplay and amazing feeds. Whoever casted this series did a great job (not Robyn Kass.) Ross and Marissa have to go but Omarosa will put up Ross & Brandi, for sure.

Guys, Don’t Forget To Vote For What Veto You Want The Winner To Have. There Are 3 Options Including The DPOV. Voting Closes Monday February 19 At 12pm EST/11am CST/9amPST

Your Common Sense
Reply to  Chessie_K

NO CBS… cannot continue their intrusive rooting in to MY personal device(s) life just to cast a friggen vote.

CindyWithaness
Reply to  Your Common Sense

It is because the real social experiment involves the fans outside the house not the people inside.

This crew is up shit creek without a paddle. This crew had 2 actual opportunities to dump Omarosa – nope they screwed up royally. Omarosa will apply pain to all of them. Her only alliance is to herself.

James is so screwed – he outs Omarosa’s lie (awesome) and then makes a deal with Omarosa during HOH competition!

Ross/Ari/Marissa need to chill the hell out! dumping on Brandi is bull shit! Brandi is not even standing up for herself – she never had time to tell anyone she was going to vote for Mark – not Shannon.

Ross/Ari/Marissa need to stop getting all drama’d out! this is a game and they all lied/are lying to each other

Maybe I was wrong Omarosa being HOH isn’t a bad thing all I gotta say thank gosh those 3 aren’t HOH ( Brandi,Ross,and Marissa).

Brandy just said something like the person who ruined the girls alliance just left. Am I missing something here? I thought Shannon flipping them to vote out Chuck was for the girls alliance. Omarosa told Shannon that Kiesha had a side alliance with Chuck. They wanted Shannon to use the veto to take Chuck off which didn’t make sense to Shannon because the target was supposed to be James.

I just read and watched the vidoe of Cody proposing to Jessica. You know, they weren’t my favorite on Big Bro, but I like them on the Amazing Race. The video was cute.

All I know is I seen Marissa use the bathroom and NOT wash her hands after, gross!