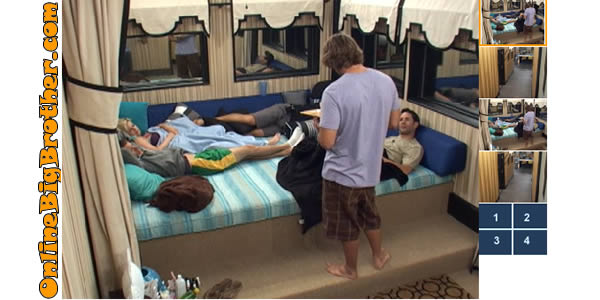 3:05pm Cabana Room Kathy, Ragan, Kristen, Brendon, Rachel and Andrew. Brendon is telling them about the “el Salvatore” taping over Enzo’s and Brit’s pictures. Kathy says it’s probably a prank.. the rest of them agree. Kathy goes on to explain why it’s not the real saboteur a) there was people walking all around when it happened and b) hayden was up in HOH and he could of seen in using the spy camera.. “theres no way the real Salvatore would of done it. ” www.onlinebigbrother.com

hayden wonders if the goodbye messages will be recorded today.. a couple people in the group say yes they will be. Hayden is explaining to them about twitter and how he can only type so many characters during each tweet so it’s “basically 1 or 2 sentences” … Ragan brings up the reality show Survivor.. Hayden doesn’t seem to know much about is and begins to ask him questions.

Ragan “its a little like big brother but its on a island”
Hayden “obviously they make it easier to survive otherwise nobody will be able to live”
Ragan “well they always have people in the 2 tribes that now how to do things like build a shelter and fish”
Hayden mentions how insanely hard it is to catch fish without the proper equipment.. He asks “How long does survivor last?”
Ragan: “30 days ”
Hayden: “THATS IT”
Andrew: “there on a island with no food its a bit different than here”
Hayden: “ohh ”
Kathy: “you should see them when they get out of the house”
Andrew: “there all skin and bones”
Ragan: “I’m excited to try out for survivor..” (sorry Ragan i don’t think you can survive survivor we rarely hear yo not complaining about food, sleep, being bored etc)
Hayden: “why is that where it’s at?”
Kathy and Ragan: “YA” 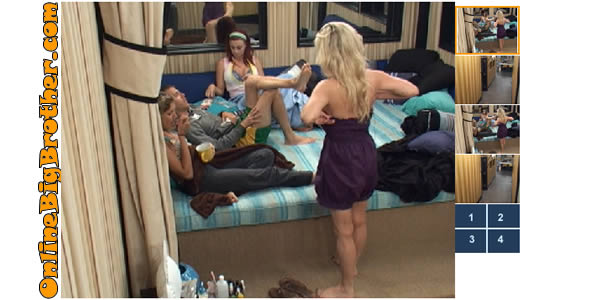 3:33pm cabana Room Rachel, ragan, Kristen and Kathy SURPRISE SURPRISE EL SALVATORE talk.
Ragan is telling them the identity of the Salvatore will be confirmed by Monday at the latest either we will find out because the sabotaging will end or production will tell us. (this is provided Annie is the salvatore)

Rachel “to what extremes do you think the Salvatore will go”
Kristen” they will do whatever it takes to stay in the house”.. Ragan agrees.. he adds that America will control the saboteurs vote. Rachel asks if the Salvatore will be overly dramatic or will it be subtle things. Ragan ” I think the Salvatore will be charming it’ll be like the devil” (HUH). Kristen agrees they will be charming but ads that the saboteur will backstab. Ragan says that the Salvatore will do things that is out of character so it’ll be the person that is acting strange, “the thing is maybe the lock was put on before the blackout and the blackout is a red herring” Kristen the fact that there was 2 lights out is a indication that there was a failed attempt (she explains more but can’t hear her)
www.onlinebigbrother.com
Kristen is saying she will not put Ragan or Rachel up and she suggests that if they win HOH they should put up a pawn and the person they want out. The pawn should be a person that will not win POV. They all are agree that they should strive to get rid of the EL SALVATORE if they win HOH.. Kristen “but you need to do what’s best for you FUCK other people advice” (lol then stop giving advice)

Hayden comes in and asks them if he can join the party… ragan asks what is causing all that Banging? hayden says “Brendon is beating his meat in the kitchen” they all giggle Hayden wonders why the fuck they haven’t given him a razer he’s been asking for days. Kristen says he looks nice that way, rachel agrees the girls think they want him to be all shaggy. 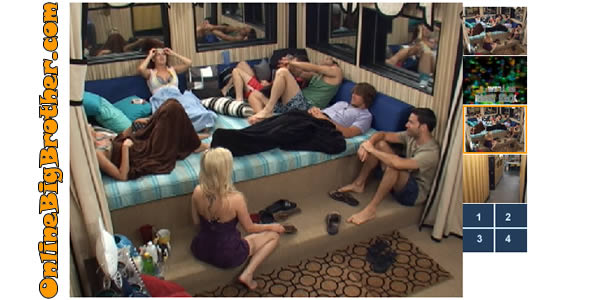 3:55pm Cabana Room Rachel, Enzo, Andrew, Matt, Kathy and Kristen. Andrew is telling them if he’s here week 5 he’ll let rachel bleach his hair blonde.. Rachel says it’s a deal. They start going over all the pictures hayden took with the HOH cam… They decide to make certain pictures a tradition.. Lane joins them. Enzo says he’s sick of being tired.. Andrew says he’s sick of hearing people are tired. The girls decide to have a arm wrestle to liven things up Rachel Vs Kristen… they wrestle for about 20 seconds and Kristen wins.. hayden says “now its time for mud wrestling” Kristen says she thinks rachel is stronger but she (Kristen) has more endurance… 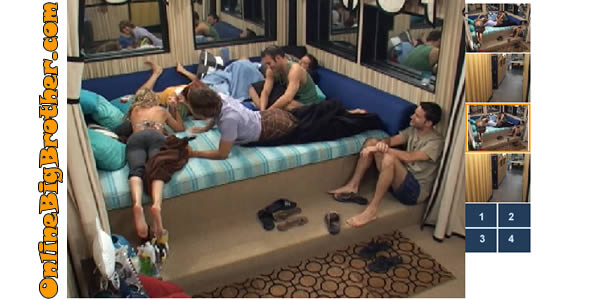 Ragan joins them again and they all start talking about the strange sounds they are hearing around the house. ‘Crickets, beeps, chirps, whistles”.. Ragan says it’s going to get a lot worse in the coming month.. Lane asks if they are going to do the call in walk up calls? Ragan says for sure but not so soon. Someone brings up season 10 were they did the calls early in the season. (this is the biggest group of bb fans that are playing bb i have ever seen) They are all agreeing that have / have nots is going to be Saturday..

They are either huge fans or just watched that season in there hotel in pre-season sequester. It seems like Lane’s entire knowledge of BB is based on what he saw in sequester and he still gets it wrong most of the time. He was saying the other day that this next HOH might be an endurance bc they had one second HOH in season 10 when April won the leaning wall rail hang, which was actually the 4th week.

Just watched CBS episode; if I hear one more idiot on tht show say “Scotch free” I’m going to stab something in my ears. Roach-el is sooooo smart, she thought the pov looked like a “siesta”. Siesta means nap, you half wit.

Haha!!!!!! Roach-el! I love it!!! Rachel isn’t very smart for a chemist. First the Yom Kippur on Andrew’s head, now the siesta. LOL.

:D I think Roach-el should really keep her mouth shut; especially with tht horrid laugh. Do u know what’s up with Bratney? On afterdark they all hang out with her— she’s totally into herself and snotty… I’m really disappointed this season. I hope they have another all-stars where Evil Dick turns Jeff to the darkside ;)

This season will heat up. When you have so many people that get along in a game where you have to backstab people, it will get intresting. Ragan will explode on someone this season if he keeps all his frustration bottled up. Cant wait, it will get really good, it’s still too early.

Quote from above: Ragan says that the Salvatore will do things that is out of character so it’ll be the person that is acting strange, “the thing is maybe the lock was put on before the blackout and the blackout is a red herring”

Finally, someone points out what was obvious from the beginning. That locked could have been slapped on at anytime a lot easier than someone stumbling around in the dark. The “lights out” was just to call attention to it. We’ll find out tonight!