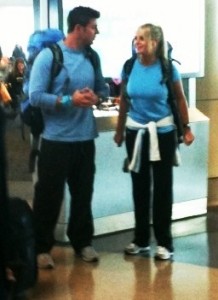 While many Amazing Race contestants wait months â€” sometimes years â€” to get selected for the globe-trotting reality series, Big Brother sweethearts Jeff Schroeder, 31, and Jordan Lloyd, 23, only had to wait days. “Just a couple days after Big Brother ended, production came up to us and asked if we were interested in doing Amazing Race,” Jordan, who won Big Brother 11 last summer (Jeff won fan favorite), told TVGuide.com. “We didn’t hesitate. We were like, ‘Yeah, we’ll do it!’

TVGuide.com: Teams tend to fight a lot on the Race. Did you have that problem?

Jeff: [Laughs] There was definitely a lot more bickering on the Race than there was on Big Brother, just because that it’s a more stressful show. Big Brother â€” you’re laying around in the yard all day by the pool. It gets stressful once or twice a week. On Amazing Race, you’re stressed out the whole time, so obviously there’s going to be more bickering and more arguing. But in the long run, it brought us closer together instead of tearing us apart.

Jordan: You’re going to see some bickering! Jeff throws some jabs here and there. There were times I wanted to shoot him so bad and times where he wanted to strangle me, but we got through it.

Welcome back Simon & Dawg! Just happened to check in on the very day you put up your site again. Know what I’d like to see? A quick followup on “where are they now” for the BB11 houseguests. For instance, did the Gnat get married and is she still working at blockbuster? Did Michelle go back to her lab rats? Is Russell fighting or what?

Also, are you strictly BB12 now or will you be following any other shows?

Best of luck to you both!

We’ve just started getting things running it’ll still a bit until their back in full swing. First thing i’m going to start working on is some “where are they now” news. Hmm not sure if we’re going to do any more reality sites maybe we should there seems to be alot of interest…..

Glad you came back!

Can’t wait to see those two on TAR. Too cute. I got it from a very reliable source that Ronnie the rat and his wife were asked to be on TAR but declined because they aren’t in shape LOL…go figure huh. The rat couldn’t handle the stress anyways. Also, they contracted the swine flu either during or shortly after the BB after party…the rat had pig flu…LOL.

As sneaky and “clever” the rat is I doubt he could last long on the amazing race… Unless he could speak a bunch of languages than I think he would have a chance.

Man its good to see this shit back up and running.

I’m glad to see people are coming back after such a long down time!

I thought you guys were gone for good. I went all drama queen, stopped eating, sulked around the house in protest.. Was going to e-mail and whine about life not being fair and this being my fun little refuge in the cold uncaring world when all of a sudden, I see the site and all is finally right with the world. Well, my sad, pathetic world. I started to listen to Miley Cyrus songs. See what you did to me? Seriously though, I’m glad you are back and I hope you had a great fall, holiday and new year..

LOL hey rockstar! sorry for putting you through all that :(

Last 4 months have been great, albeit a little stressful at times.. i’m glad I was able to get the site back up, we’re slowly putting everything back together to get ready for BB12.

Now you can stop listening to Miley Cyrus :)