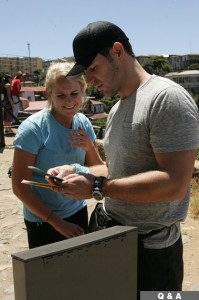 CBS doesn’t typically allow cross-pollution between their reality shows — you’ll never see “Survivor’s” Russell on “Undercover Boss.” But every now and then, the network sees something special in a duo (like Rob & Amber) brought together by fate (or the CBS casting department) and gives them another chance to go for the gold.

Such is the case with Jeff Schroeder and Jordan Lloyd. This Sunday the “Big Brother XI” sweethearts will trade their slop passes for passports when “The Amazing Race” waves its green flag on another exciting season. And since I was straight up obsessed with these two for the last half of 2009, I had a million questions.

Are you still together? Why come back to reality TV? Did Jeff ever take Jordan on that Hawaiian vacation he won on “Big Brother“? Turns out, I’m not the only one.

PW: So when I asked my readers what they wanted to know about you two, the overwhelming question was, did they go on the Hawaii trip together. So, did you?
Jeff: Man, everyone loves that question! We didn’t go to Hawaii — but we’re planning a trip to Antigua, which I think trumps Hawaii anyway. We’re gonna stay in a tiki hut.

PW: Have you guys gone back and watched “BB?”
Jeff: I haven’t. But Jordan has.
Jordan: I haven’t watched everything, I’ve seen a lot. But it made me mad. I couldn’t believe I was so naive about certain people. Especially when they showed what people were saying in the diary room. It was like, “oooh, that’s what they were saying about me!”

PW: Compare the two shows: which is harder?
Jordan: They’re hard in such different ways.
Jeff: “Big Brother” is like running a long race, “Amazing Race” is like doing a lot of super stressful sprints.
Jordan: I’d say working together on the race was harder for me. Jeff gets so mad at me sometimes.

PW: So do you think this is your last reality show, or might you pop up on “Survivor”?
Jeff: I’d like to make a guest appearance on “Man vs. wild.” I love that guy!
Jordan: I wouldn’t do any other shows … unless it was a Jeff & Jordan show! It probably won’t happen though.
Jeff: Anything is possible!

“The Amazing Race” premieres Sunday at 8pm on CBS

Of all the couples that got together on Big Brother this is who they have on their show. They were the most boring Couple ever. I am so disappointed. You had another better couple previously who really tried to get on the show and it would have been the first time I EVER watched this show. Jordan is an air head. Jeff is not that great either. I did not like them at all. Bummer!!

A girl after my own heart.. (If of course I liked girls..) I agree.. Bummer indeed.

At first, it looks like a huge contrast of shows… stress wise. But the more I throught about it, the more I am inclined to say that the amazing race would be easier. The main reason? Privacy. Big Brother is like rats in a cage being watched (and prodded) by scientists. With no release and no escape. At least on the Amazing Race, you are keeping acting and get some time out of the camera’s eye.

// its kinda cute that they’re still together.

But I’m a bit peeved it took them that quick to get on the show, I had been waiting for a Janelle/Will or better, Janelle/Kayser group on the Amazing Race since season 6

I’m shifted by the way an individual managed this topic. It is not typically My spouse and i knowledge a web site together with interesting posts just like the one you have. I’ll take note of the feed to be up-to-date along with approaching changes. Just striking along with accomplish carry on inside the sound work.