SEE what they CAN’T show you on TV!! 3 Day FREE Trial

2:46pm JULY 12th Living Room Brendon, Lane, Enzo and Andrew. They’re talking tattoos, Lane says at first he was just going to get one but after you have one you’ll get a second “There kinda addicting” Andrew has heard that it can hurt. Lane shrugs, says if they are done right and in a good spot it’s not bad. Andrew asks where people can get tattoos? 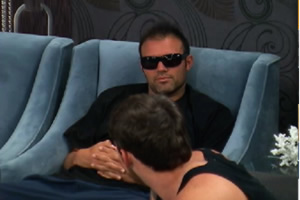 Lane list off some places but basically tells him you can get anywhere tattooed. LAne is telling them he had his tongue pierced twice. Andrew asks him why do that other than increase pleasure for your partner. Lane said he was into piercing and tattoos and his brother did tattoos. Lane explains his tongue was massively swollen he went to the bar with it and had to keep drinking to keep the swelling down. He says he had the “Craziest” Tongue rings “tickler ones”, “a vibrator one”, “8 ball with all different names”, “Snake tongue” and “glow in the dark ones” Andrew asks if the ladies liked them. Lane “Hell ya… the vibrating ones are a bitch because they chip your teeth” He goes on to explain all the dental repairs that had to get done because of his vibrating tongue. Brendon :”man thats wild”. They ask andrew if he would get his tongue pierced, he says if he was drunk he would do anything

Lane wants to start tattooing in the house using prison style tattooing. Enzo and Andrew don’t think it’s a good idea. Enzo thinks a tongue ring is weird “Whats a dude with a tongue ring doing on his down time thats what I want to know” Lane says he never played with it”

3:12pm Backyard Houeguests out of lock down the Washing Machine has been fixed… Big Brother has left them instructions on how to operate it. the words “Be Patient” in the instructions is condescending to some houseguests and their a little pissed.

3:23pm some houguests are laying in the sun, others are chatting about shit. Annie is trying to convince Matt to vote for her to stay and Rachel/Brendon are cuddling in the bedroom but nobody cares.

Do Brendon and Rachel even talk game? Seems to me like they are too busy cuddling and all to be bothered by the game at all. They better get their heads in the game soon, Brendon can’t win all the games.

At least Jeff and Jordan strategized some, even if they were stupid enough to get conned by Pig Pen.

They are way too cocky.

There is too much shade down here!

I mentioned this earlier but it was a comment to a late night post. It was regarding the rope that Hayden got in his HOH basket from home. Since it is one of the items listed as one of the 12 tools the saboteur can use – I wanted to know if it is still in site when watching what is going on in the HOH room.

It was deliberately left hanging on the handle of the door right before Hayden and all the HG walked in to see his HOH digs. Hayden justified why he had it and I believe him. However. since the real saboteur knows what s/he can use as a tool to set someone up – s/he knows that its in the HOH room.

Has anyone noticed that whenever they are in the HOH room if any handles it or plays with it while talking in a group or one on one? Has it gone missing? Just curious because if I had the feeds that’s what I would be following in order to find out who the saboteur is.

It is obviously someone who can’t possibly make final 4 but is usually around at least the first month the show is on.

What list are you referring to? Is it on this website? If so, could you link me?

Where is the list of the 12 tools the saboteur can use? That’s the first I’ve heard of that. I think this whole saboteur thing is kind of stupid. Maybe it will get more interesting, but right now I don’t see the whole reasoning behind it, or how it is going to change the game.

Listen to people already being called floaters I mean come on theyve only been there for a week plus Rachel being on block and have not has shown nothing but class.Annie being on it is total talking a lot crap fake crying and trying to bs everyone she bi but total hitting on Lane for vote playing gay card with Ragan.

What’s up with your site. It is me or are you having problems running it this year?

I am starting to get pretty bummed out and to be honest join another site.

It is a shame because I really enjoyed this place last year. Is everyone now using twitter? Slow posting of events and comments – plus navigating this site is confusing. I hope its just momentary technical glitches. If it is then at least post something so people like myself will know.

I don’t mean to sound harsh, but this is 90 percent of the fun I get out of watching this show.
Thanks

sorry to hear your not happy Jimik60, dawg and I can’t possibly work any harder on this site than we already are. Thanks again for sharing your opinion with us.

Please come back to visit from time to time.

I am not going anywhere – I guess when there are a lot of folks commenting at the same time some of us get locked out because of server overload – plus being on the east coast doesn’t help.
I am sorry you misinterpreted what I was saying. I just wanted to bring a possible technical problem to your attention.

I t seems to be going fine now . Thanks simon & dawg for addressing my concern.

We hate to see you go JimiK.. Things always start slow we usually don’t see the crazyness start until 3 weeks. Either way maybe we can solve some of these glitches.. we’re open to suggestions

Simon & Dawg are right – the first few weeks things are pretty slow as we all get to know the Houseguests. I don’t twitter so can’t compare other sights to here. I found this site 3 or was it 4 years ago when I was looking for updates from the live feeds & this was the best that I found.

You may look around but you’ll probably be back. They guys work hard keeping us informed and considering I can’t make it through all of after dark – I applaud them for their hard work!

Thanks Cheesh… are you a bb8spoiler veteran?

i basically use twitter to post funny images and sometimes headlines that are posted here to. its fun but the site is the main focus by far

chick from louisiana
Reply to  Chesh

I agree! I located the site last year and had a blast here. I have checked other BB sites in the past, but this one always has the most information and the latest. As soon as BB started again this year, this was the first place I came. ( It’s an addiction) All day long I check up with you guys and get the latest info. It is by far the best bb spoiler site.

WOW for someone who is looking at a site for FREE you sure do have alot to complain about. I don’t see what you’re saying about having a hard time navigating around this site, seems pretty simple to me. Maybe it’s the person behind the computer and not the site. Just a thought….Keep up the good work Simon and Dawg your site is the best for up to date information!

Simon and Dawg have the best BB site anywhere. You guys rock.

I agree and I dislike everything.

Thanks, I appreciate it.. what team you on this year?

Think Brit and Lane are a real life couple…