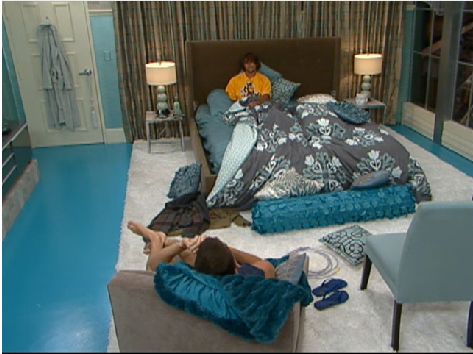 1pm – 1:15pm Hayden in up in the HOH room with Ragan talking. Ragan says that he has been holding off talking to Hayden because he didn’t want it to seem fake. Hayden tells Ragan that it is really hard to figure out who is genuine, because I have the power right now. Ragan says that he is a good judge of character, and that he knows Hayden is genuine. Hayden says that he feels the same way about him too and that he’s told others that as well. Ragan tells him that based on Hayden’s decisions he can tell Hayden is a good judge of character. Hayden says he was raised to respect people and give them the benefit of the doubt. Ragan says that his game play is just to evaluate who he can trust, and to watch which people squirm this early and play that hard in week 1. Ragan says it says something about their character. Hayden says that people have been throwing people under the bus left and right. Ragan tells Hayden to watch the people who throw people under the bus and to be careful and follow your instincts. Ragan says at first he thought the saboteur twist was stupid on the first day from the point of view of a viewer, but it really messes up your game because you feel like you don’t know who to talk to. Hayden says yeah, it just increases your paranoia. They both think that there will be another message from the saboteur before Thursday’s eviction. Ragan says he feels most comfortable with Hayden, Kristen, and Matt …and that Rachel is a follower with a good heart. Both Hayden and Ragan think that Big Brother will be trying to persuade them through the diary room sessions to keep the saboteur. Just as they are talking about this Big Brother cuts the feeds….

I can hear Big Brother speaking, “You are not allowed to talk about production.”

My favorite is when they just say “Stop that”

Oh I know, that one busts me up too.

The two houseguests that are linked, possibly?

the two pictures are for rachels pair of ta-ta’s…. they couldn’t fit those ginormous things into a single picture…. had to crop and cut those bitches

Rockstar
Reply to  I