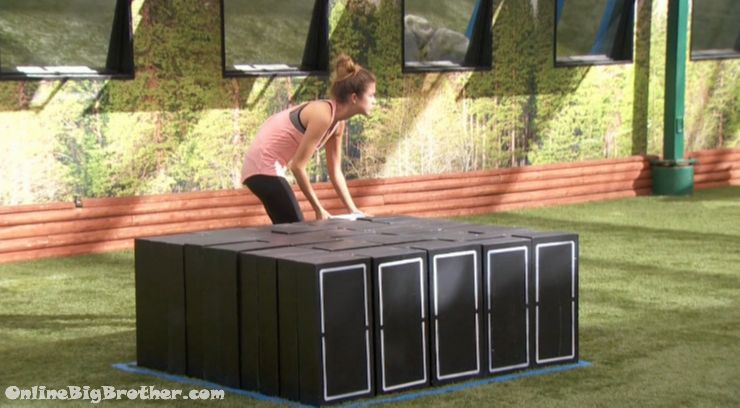 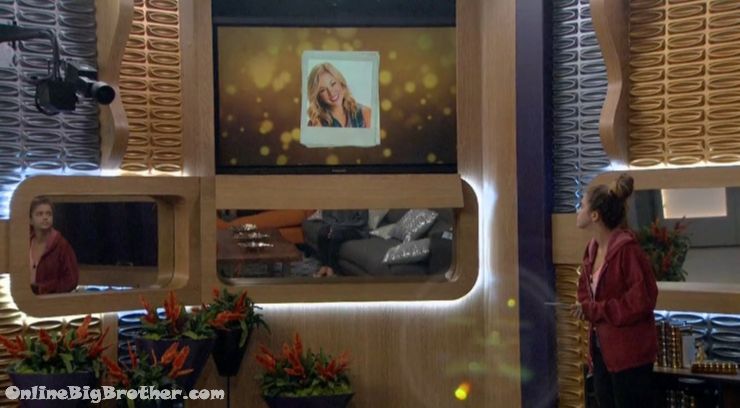 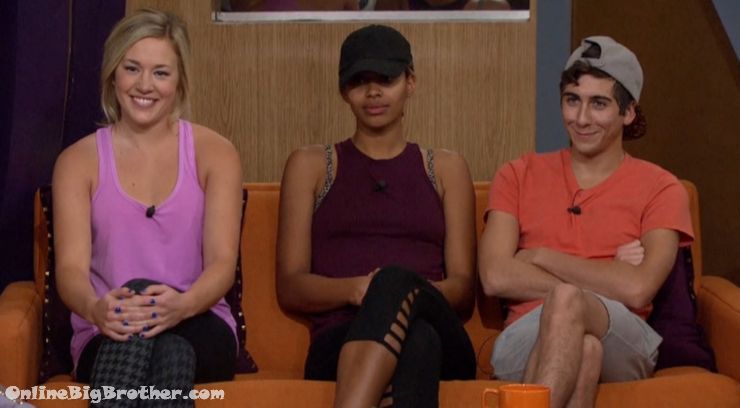 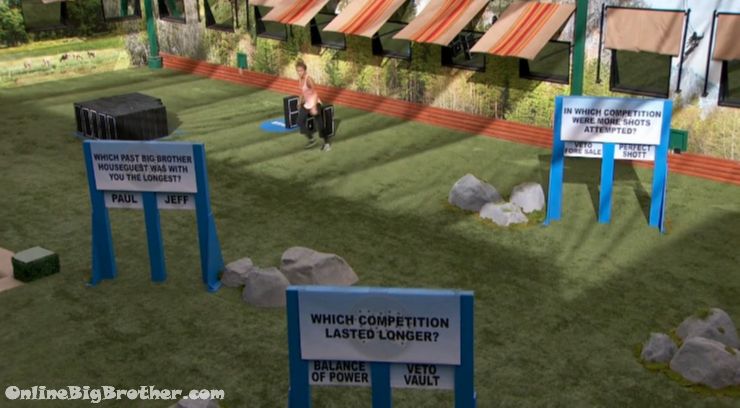 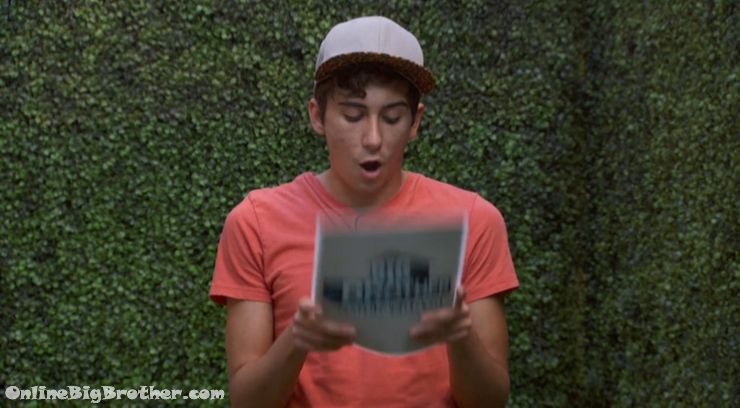 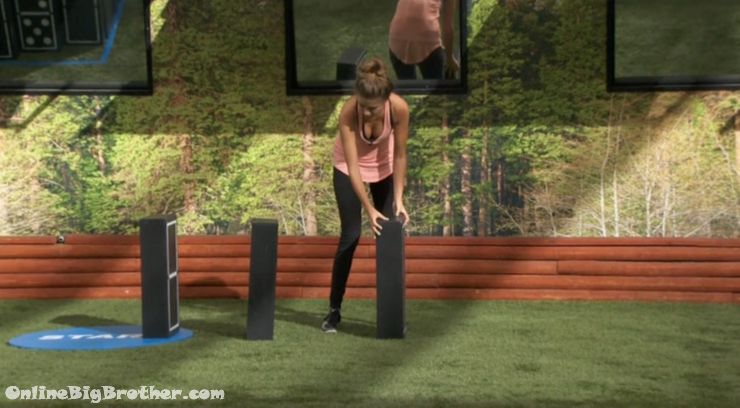 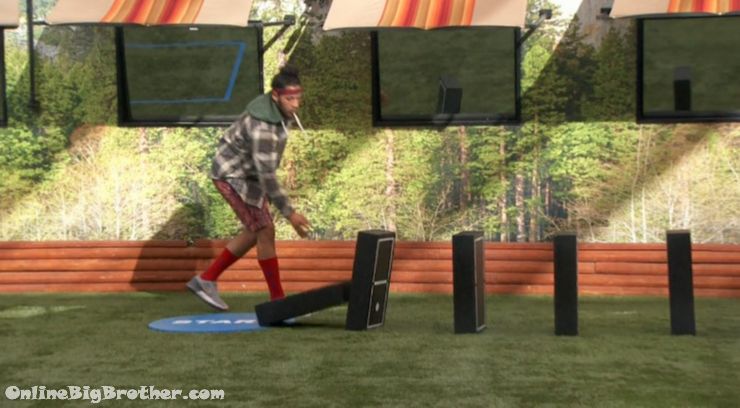 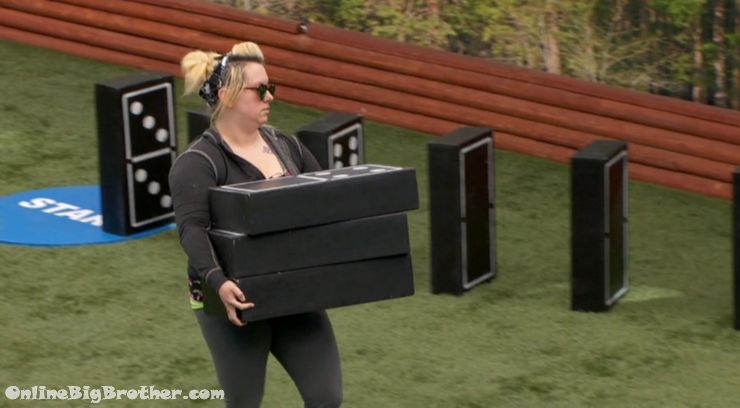 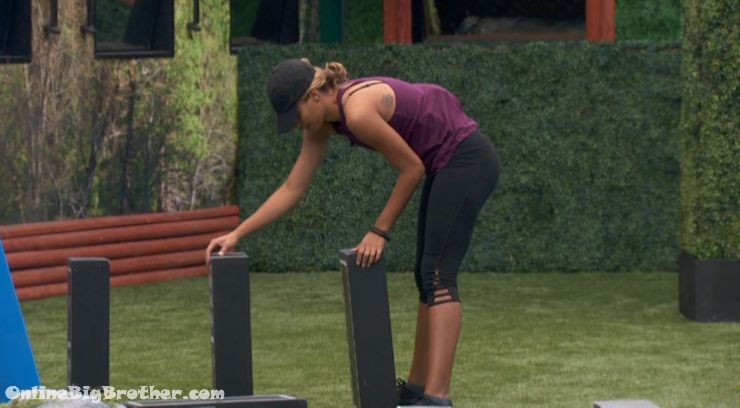 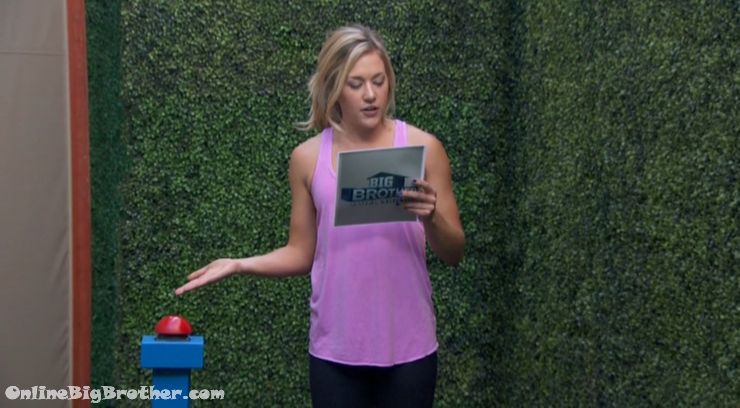 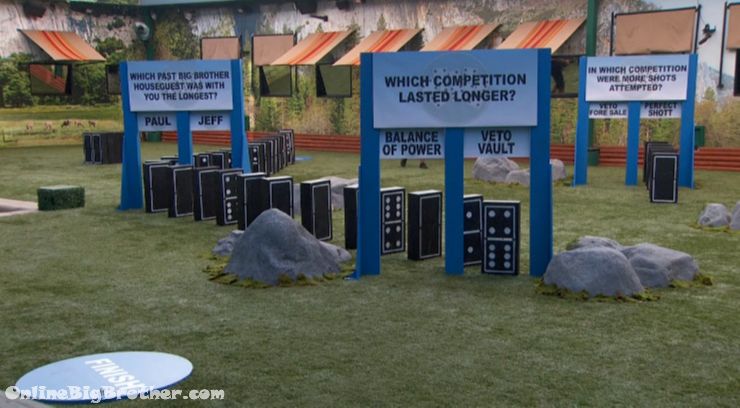 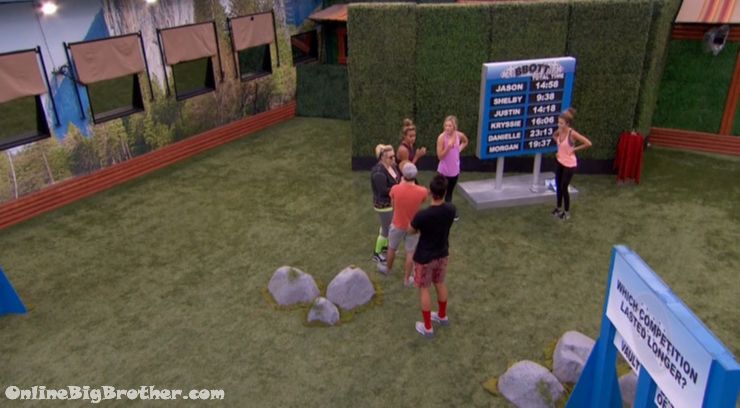 The correct answers were Jeff, Veto Shott and Veto Vault

Safe to say Shelby will use the veto on Morgan. Leaving Danielle and Jason on the block.

Who would you rather stay Daneille or Jason? 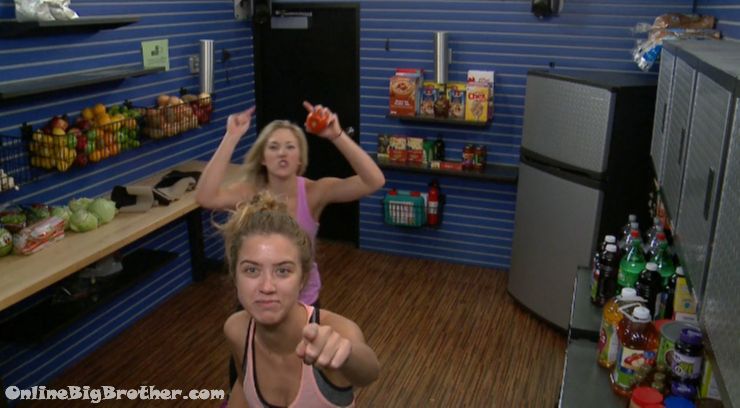 4:48pm Celebrating that neither will be going home this week.

Shelby – this feels good… this feels very good
Shelby – Not this time America… you’re not taking another Willett sister away from me.
Morgan wonders if Danielle will even try to campaign. 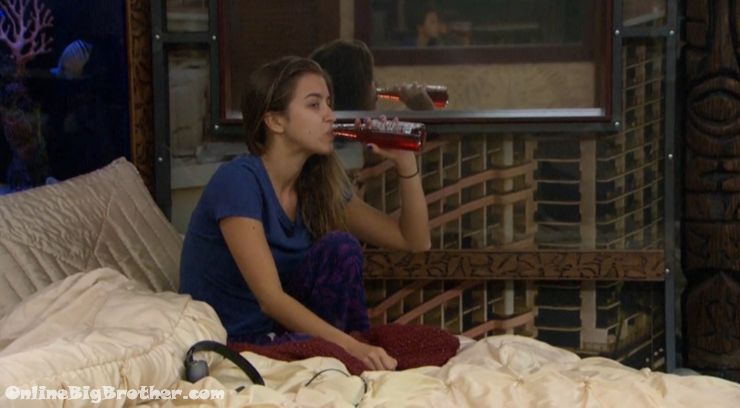 6:54pm HOH Morgan and Shelby
Morgan – first time ever we don’t have 3 up there..
Shelby – we have to make sure at least Justin votes out Danielle
Morgan – it’ll be me, Justin, Kryssie voting
Shelby – and America
Morgan – Justin for sure will vote Danielle.. America will vote Danielle they’re not going to vote Jason
Morgan – MY mind is going 8 million miles a hour
Shelby – I hope it slows down this is the only night we get top relax.
Morgan – I feel like Alex.. played the game so hard and got cut early.. She’s looking at me and is like What the hell are you doing.
Morgan – I’m trying so hard.. I keep thinking OK i’m goign to try so hard in this comp and it’s going to pay off..
Shelby – I know you wanted to win it for yourself.

Morgan sounds bummed out that she hasn’t done a lot in the game.
Shelby says she’s felt the same thing until recently.
Morgan – I have a fire to win it .. when is it going to happen
Shelby – next HOH hopefully
Morgan – Hopefully America can see I can work a deal with Justin and Kryssie to toss a HOH comp..
Morgan is going to tell Justin if he tosses the HOH comp to her he’s guaranteed the care package and final 4.
MOrgan – I’m targeting Jason I wanted him out week 2
Morgan is going to add to Justin that by throwing the HOH to her she can take Jason out saving Justin from having to do it.
Shelby – he’s already safe with the care package..
Morgan – exactly he’s already safe..

They talk about Kryssie going on about playing the “Loyalty game” she told them she’s loyal to them going to final 4. They will be the ones taking Jason out so Kryssie can keep playing the loyalty game. 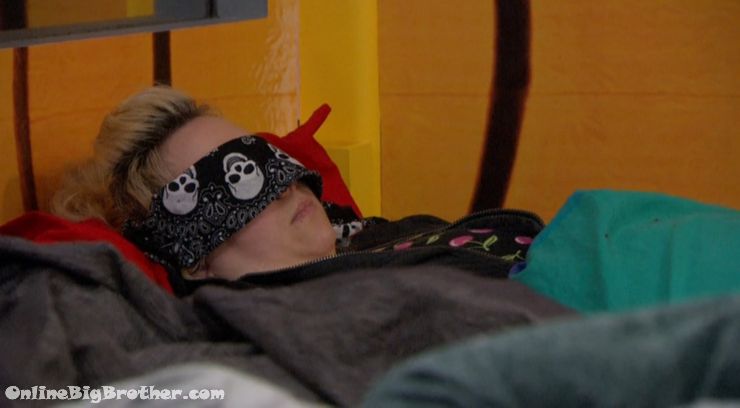 So Shelby needs to put Justin up best bet if she wants Jason or Dani or hell even Justin out . I know yall want krissie out but she isn’t the threat and that would be a waste of Shelby’s HOH

Thank God Shelby won!!! WOOOOOOOOHOOOOOO!! I just hope they wisen up and take Jason out this week instead of Dani. They need to be thinking about end game, not emotions. Jason will win in the end. Hands Down. there’s nooooo waaaay America would EVER vote Dani to win. Now is their only time to get him out. He’s OTB take the shot!! The ppl on chat are all saying take out Dani. That’s only bc they don’t like her. If you’re really a fan of Shelby you’d want Jason gone. If Jason stays……..Morgan doesn’t win HOH. Shelby and Morgan are $crewed. Jason has Kryssie and he can easily get Justin back. If Jason goes. The girls for sure have Justin and Kryssie has nowhere to go. They can take Dani out next week.
As far as the CP. That’s pointless. There’s No way Dani would get it over Justin. And when Justin gets it…it says he has to complete a task to claim it….and we all know he $ucks at tasks. LOL

I must say I absolutely love KARMA! You think Dani and Jason regret that BS 5 person alliance out of spite? Would be the better move to take out Jason, but that won’t happen. Don’t let the door hit you in the ass, Dani!

YAY…Shelby Rocks!
I think they need to get rid of Jason this week. He has a huge fan base and if he’s sitting there at the end, he will win. I don’t think they realize this and that’s why Morgan was put up as America’s Nom – Jason’s fan base.
Kryssie should have been AN. Can’t believe that burper is still there. All the other sites (beyond this one) said she was ahead in the polls for AN this week.

Yes! What’s up with these polls?

According to people on chat, the polls are $crewed up bc of the misfit fans. Apparently, they’re getting on multiple devices and voting. That’s also what they were doing for the real CBS vote too. That’s how Scott and Alex were both nominated over Kryssie. They were using the free 1 wk trial on all access, signing up for multiple accounts and voting. Which is BS! But what do you expect? I don’t expect anything less coming from people that actually like Jason, Danielle, and Kryssie!

From what I’ve been able to observe on twitter this morning, LNJ fans are now saying they will vote for Kryssie to win if Jason doesn’t make it to final 3.

I wanted Danielle out this week but they need to get Jason out. This is a golden opportunity and will be out of America’s hands. Jason has a lot of fans out there that are going to be keep saving him before anyone else in that house. They would be foolish not to get rid of him now.

Vindication!!! Way to go Shelby!!! Comp BEAST!!! I think it should be Danielle going bc it will still be 3 vs 2 and Danielle can win comps over Jason easily. Plus I could see Jason thinking he could win easier against the girls in the end but Danielle wouldn’t care she would be completely against them.

I’m honestly enraged that Morgan was americas nomination, who are these people!!!!
I’m not pro ballsmasher or LNJ, I like game players aka Jason, Danielle and Shelby.

Morgan is much more tolerable that krissy or Justin. And the game would be boring if it was Shelby vs LNJ.

I just don’t understand how voters thing krissy deserves to be in the house over Morgan! So disappointed.

Much as I’d love to see Danielle go, I don’t think this chance to send Jason packing should be passed up.

Also, has the LNJ group already commenced with the complaining and sh*t talking?

This worked out great for Morgan. She will be taken off the block and won’t have to worry about being nominated in the future for AN. AWESOME!!

Dani has to go Comp wise she is to good

Shelbie beast moding them comps… She will get out a huge target in Jason or Danielle this week. I would like to see her make it to the final, she is very deserving. I don’t care how the rest plays out as long as 1 ball smashers makes it to the final and that preferably being Shelbie. If Morgan makes it I am cool with that too, well if any of the last 5 that’s cool too…

Although I totally agree with wanting to see Shelby and or Morgan in the final 3, they would not have a chance on winning with the voting being done by Jason and the misfit fans, even if they both brought the useless, quitting, crying, vulgar Krissey to final three with them. Sad really.
Shelby is the winner of these last six. Krissey quit from day one throughout. Danielle broke evry BB rule and was never punished. Justin broke some rules as well but he was at least entertaining. Jason is the biggest disappointment being a fan of the game yet used no strategy only his fan base.
The season started off with promise however America’s bias towards their favorites, no matter how poorly they behaved, turned this into a pissing contest.

I don’t understand why people hate Morgan so much. I would have rathered had Kryssie as America’s nominee then voted out. That whole LNJ have been nastier than Morgan.

I don’t understand why people hate Morgan so much. I would have rathered had Kryssie as America’s nominee then voted out on Wednesday. The LNJ have been nastier than Morgan has. I’m happy that Shelby can save her.

It seems to me only the President Trump supporters are posting here these days… : (

This is great but ...
Reply to  Ariana Grande stinks!

Well, I agree with your user name at least. :)

Soooo glad Shelby won Veto !!!! Will be glad when Dani walks out the door. I can only hope she sees the real fans feels about her after she leaves. How would she like it if someone was wiping snot on her son’s stuff out of spite….

This site has always called out production for rigging and influencing the game, and no one see the obvious cheating by production! The only comps Shelby “beasts” are timed comps that she has been given the answers to. She didn’t even look at the questions before answering them or the course before deciding which way to go. This should be Jason’s HOH. I’m still waiting for you to call them out on all their bull crap.

Well my my my ….. oh you mean like they gave Hillary the debate questions ahead of time!

Is this the last America’s Nominee and care package? Is all that’s left after this week America picking the winner?

… even if a BS gets past the LNC and America to reach the Final won’t they just lose anyway since America (aka Jason’s twitter trolls) act as jury?

Morgan is on AN because Justine fans don’t like how she be trying to play him acting like she wants him while really thinking he would fall for it, and talking trash about him to Shelby behind his back like he is a dummy! That’s why Morgan is on the block FYI