SEE what they can’t show you on TV! 3 Day FREE Trial

6:15pm July 10th HOH Hayden and Kristen. Kristen is worried because they were not at the convention and now people are talking that something is up with Hayden and her. Hayden says that Andrew pointed it out… (bubbles breaking this shit up)Hayden tells Kristen that all the girls in the hose cannot be trusted. Kristen agrees she says the guys are much more trustworthy, She really trust Lane. Kristen brings up seeing hayden and Brendon talking and she wants to know about what. Hayden says that Brendon 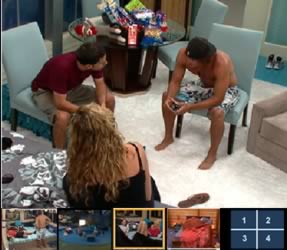 offered him an alliance that included Rachel. Hayden says he’s going to keep Brendon on the friends list for the next 3 weeks just to get the heat off. Eventually Hayden will need to get rid of Brendon “I can’t trust the guy.. I put him up on the block” they are both agreeing that Annie is the right person to send home. Kristen is worried they don’t have the votes because everyone is worried about Brendon and Rachel being a power couple. Hayden says they need to ensure that they get the votes. Talk moves to the saboteur. Kristen speculates it’s Matt and Annie. Hayden tell her no fucking way Matt’s been campaigning against Annie hardcore. Hayden is certain that Annie is the saboteur. Kristen mentions that at the very lest she part of some twist in BB. Kristen suspects that other people know that her, Hayden and Andrew have something going on. Hayden tells her no fucking way. Kristen 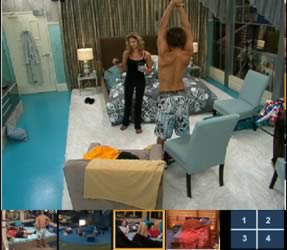 giggles about how weird Andrew is. Hayden laughs to but they both agree he’s a nice stand up guy. Kristen said she’s been thinking that a funny twist would be Enzo and Kathy being the 2 saboteurs. She thought about this because Enzo is always talking about his blonde skinny wife. they go over the strength of their alliance and say there should be a third to seal the deal with. Kristen says they should keep Andrew but leave him in the dark.. hayden is nervous about this because Andrew is such a big target everyone wants to put him up .. “Especially the girls” They tentatively agree to keep Andrew but not share any secrets as to not risk him fucking it all up unintentionally.

They bring in Andrew

They bring up that Matt told him Andrew’s been telling people about Hayden and Kristen missing the convention. Andrew says he’s shocked that Matt said that becuase he told him it was Brendon and Kristen…. 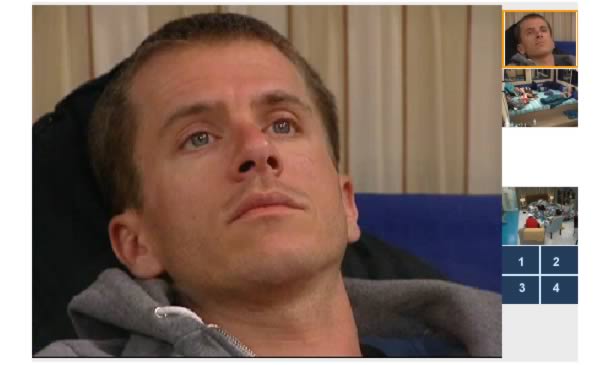 7:00pm Ragan, Monet and Annie. Ragan starts crying says the house is getting to him.. all the camera’s and the pressure. He starts wiping away the tears and says that now we’ll start to get known as the gay guy that cries all the time. Annie and Ragan both share stories about coming from a past where they were not popular and how right now the house feels like that again for them. They go on to talk about the show and how Ragan thought while watching the show taht have nots was going to be so hard, they told him about it in pre production he didn’t beleive them. He’s amazed at how hard it is to be a have nots it’s breaking him down. 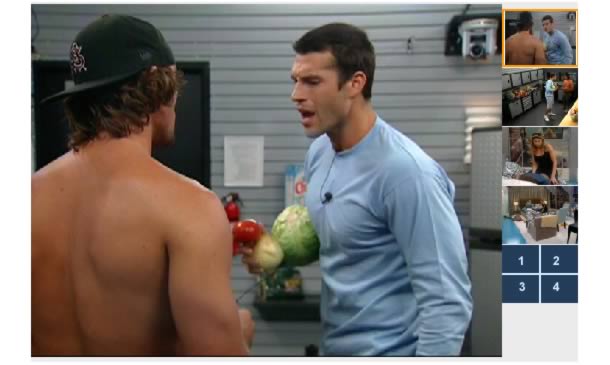 7:40pm Storage Room Hayden and Brendon. Hayden tells Brendon that Annie is most likely going up. He asks Brendon how close he is to Annie and if this will cause issues between them. Brendon says he’s only close with Rachel. Hayden defends putting up Annie by telling Brendon that the only way to save Rachel is to put Annie up otherwise Rachel doesn’t have the votes to stay. Brendon thinks theres another way.. he suggests putting up monet. Hayden says that putting monet up will never happen she’s got too many guy votes and hayden kinda likes her. 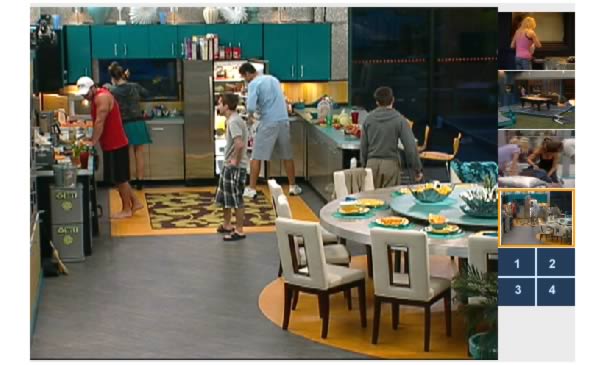 Glad to have you and Dawg back for another great season.

we’re really excited about this year it’s going to be a blast. I’m glad to see some of the regulars coming back..

this was a great site last year, and it’s started out great this year!
hello simon. let’s strap up for another roller coaster ride!!!
and go andrew sabotuew!! lol.

hey cardic_dude, thanks for the complements

The shot above of them all in the kitchen; we watched this last night. I am amazed at how small Matt really is. I’ve seen small men before, but he is downright petite!!! And notice his posture and Ragans posture; both small shoulders and hunched over. They walk around with the same bad posture and the exact same movements. They even look similar if you pay attention. I’m just saying…………..

I get what you’re getting at, but I doubt they are kin.

I do believe Matt is the saboteur, though.