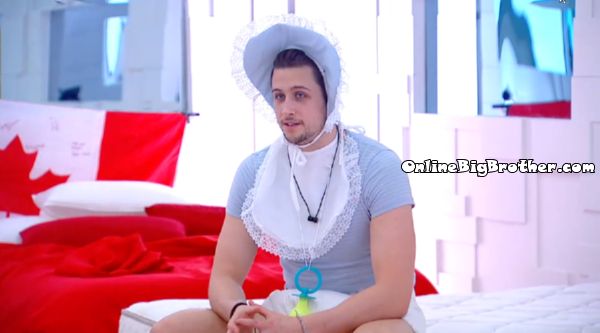 8:04am LIving Room Heather and JOn
JOn talking about what to say to Adel about going up as the pawn. Heather mentions how she was already nominated twice

8:05am Storage room Adel and JOn
Jon going over with Adel about what he’s saying to Heather during the pawn negotiations.

8:22am Production comes over the speakers says they will be locked out of the house in 45 minutes and Jon will be called to the Diary room in 30 minutes,. 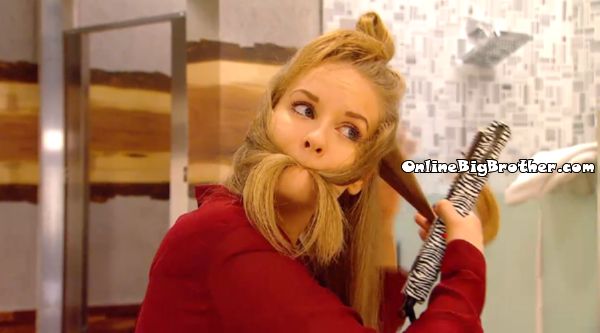 8:44amm Bathroom Heather and Sabrina
Heather saying today should be interesting “Everyone is talking about pawns”
Sabrina tells her she is going home is she doesn’t win POV so its fairly safe for Heather to be the pawn.

8:57am Big Brother Comes over the speakers tells the house guests the bed sheets need to be stripped off the beds.

10:53am Sabrina and Neda BEdroom
Neda says Heather is upset, “I don’t know I think she’s getting the feeling”
They wonder why Jon isn’t telling Adel that Sabrina knows she’s staying.
Sabrina brings up next week’s HOH and what would happen If Neda or Adel win.
Sabrina – “So basically the only scenario that I go home is if Adel wins”
Neda says yes.

Jon joins them.
Sabrina asks Jon if Neda wins HOH it Sabrina and Her on the block. It’s Jon’s votes.
Jon doesn’t answer says he hasn’t decided. They start chatting about whether or Not Heather will be a bitter jury member. Neda doesn’t think she will be but Sabrina thinks she will.
Sabrina leaves..

Neda “I’m leaning towards Adel in final 3”
Neda thinks Sabrina will be better at the competition and Sabrina will have more jury votes. 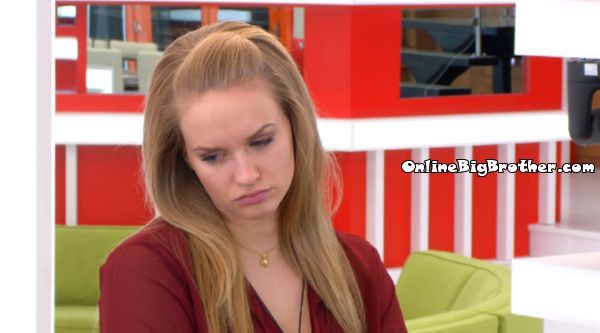 11:04am Kitchen Heather making a toad in the hole 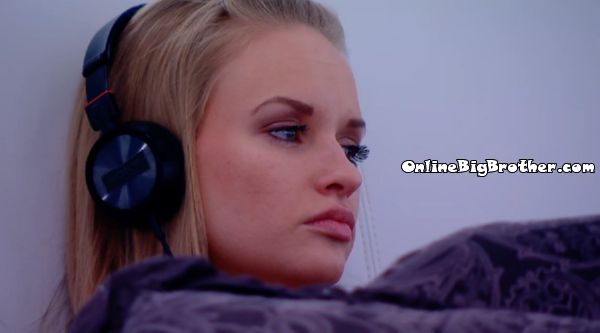 adel is a moron, he really believes jon is going to take him to the end…… his so stupid he does not even think his going if heather wins pov…

Two days ago Adel looked at Jon’s picture before everyone was awake and said “You’ve got to go”.

adel does not think his going home if heather wins pov….. he believes jon and neda are taking him to the end….

adel is probably right. he would be first choice to F3 for anyone. he is bad at puzzles and word games and memory games, and he hasn’t proved himself for any physical ones either. they have seen both Sabs and Heather do fairly well in both, when they are in them long enough to show what they can do that is. Sabs did not do badly in the postcard one, for example, which was a bit of both.

What? Are you stupid? He knows they arent taking him to F3, which is why he isn’t telling Heather she’s going home. He knows if he does, she’ll have more fire in her belly to win POV, in which case Jon would put him up and they would vote him out.

The outfit Jon is wearing suits him to a tea. Since the game began he has expected to get what he wants when he wants it period.
He is an insecure, jealous, pampered little baby. He whines when he does not get all the booze. He pouts when other house guests
are getting attention. Boo hoo Jon. Why is it he cannot have some fun with his costume? Oh yeah because he is indeed a BIG BABY!

Hahaha well noone asked you “HELLO” so you can go ahead and shut up. If you were on thia show you’d be criticized way more. Oh wait no you’d be voted out first because of your shitty attitude

jon and neda got scared that sabrina and heather are alone in the bedroomm.. they went to check on the two paranoid mother fuckers…..

Adel is STUPID, coward , hypocrite, it sickens me he’s all of the sudden nice to Sabrina, he has ZERO clue he’s about to go home if Heather wins POV, I also hate the fact that he isn’t bothered that Joneda are keeping Sabrina (person who he wanted to get rid of all season) over someone from his own alliance HELLOO DUMBASSS!??!?! anybody home??!!! if Jeda’s willing to cut Heather off, they’ll cut you off in a heartbeat DUMBO

His gameplay is terrible, and one part of this is turning on his allies with 0 problems.
Whoever saw him, when Jon mentioned 1st time Arlie as the target for him, he pretty said “OK” before Jon managed to end his sentence. The same thing happened with Heather being the target.

Rooting for the “Adel saves Heather” veto outcome. Would really shake things up at this point! Neda is very dangerous to everyone.

Joey, that would be awesome, but I don’t think it’s going to happen. Unfortunately, Heather is on her own and has to win PoV to stay alive. If she does win it, I’ll be doing my own version of BB Best Dance!

Adel needs to use veto, if he wins it, on Sabrina, only way to get Neda out. Because if it’s Neda against Sabrina, Sabrina goes and Neda stays

joey this wont happen adel for some odd reason he thinks his not going home if heather wins pov…adel will keep noms the same if he wins veto…. heather is on her own on this one…….

In addition to being and idiot in the game, he’s also a jerk. Saying he doesn’t care about Heather being upset being on the block (and not being told she’s going up) shows both his character and how little he has idea how to play the game.
Neda not talking to Heather about her concerns might be either a very stupid or pretty smart move. If Neda can blame this move solely on Jon, she can be safe next week. I doubt it will work though, Heather is too smart to think Jon can come up with and decent game ideas on his own.

I really hope Heather wins POV in two consectutive weeks, she can send Jon or Neda home next week.

jon dont bs heather , heather know youre full of shit .. shes really not giving u any info on what she plans on doing…

Is Jon really blaming his nominations on production? In addition to being a very unbelievable twist, if Jon was always set on putting Sabrina and Adel on the block, how would production putting him on the spot change Adel to Heather in a few seconds? He can’t seriously think Heather will buy it…

adel does not talk game, he is lucky he’s come this far. he has put all his eggs in one basket and will get evicted because of it

its all confusing to me everyone’s making deals w everyone its a game & anything can happen depending who wins pov & or hoh….Sabrina was used all game cuz shes not a threat she’s just a number & playing that role got her friends in the jury & to the final 5….Its anyone’s game still really

its really up to production who gets far in this game….notice the last hoh that shit was made for jon to win …. to many production interference this year…. allison coming in two week late and getting a safety for a week….. canada as hoh…… hidden veto allison again…. the last pure bb game was bb 10 dan ghessling ….

Hey I was just thinking that earlier! Man I love Dan. He’s my number 1

Are Jon and Neda changing their minds to keep Heather instead of Adel, once the POV is won? Also their game move to take Sabrina to final 3,then maybe final 2 is not such a great move, Sabrina will have Allison and Rachelle’s vote and after this move. I believe that Heather and Adel would be pissed off, and vote Sabrina. In past conversation Jon saying if our group got voted out before final 4 we should lose each other votes. Stupid of him to even say that. Neda is really trying to make Jon look like the bad guy in front of Heather I wish she would bring this up to Jon about Neda.

How about we say good things or nothing? Jon is a big baby? Adel is a moron? Paranoid mother fuckers? I hope none of you would
Mind people judging you so harshly of you were the ones in there! Neda’s playing a super smart game it
Would be smart to get her out but I would be alright if a smart person won the game! Jon’s just as smart for teaming up with her and they’re both smart for the decisions they’ve made individually and as a team. I think they both deserve to be in final two.

Eat this
Reply to  C'mon people

You say don’t judge people. And call them this at that. But you can refer to people as “smart”. Who are you to judge who is smart and who is dum. Ur a piece of horse crap

nope jon still wants heather gone and neda has to go along with it… she is not going to go against jon and piss him off … neda wants jon atleats f3 because jon will take her to f2,, at this point neda and jon wants adel f3,,,

Adel is not going anywhere and he knows it.

Why can’t Jon have some fun in the baby outfit? All of the serious hardcore live feeders want to be entertained. Imagine if it was Arlie in the baby clothes. It would be comedy gold!

cause jon is a big cry baby.. his a sore loser also..

You need targeted visitors for your website so why not try some for free? There is a VERY POWERFUL and POPULAR company out there who now lets you try their traffic service for 7 days free of charge. I am so glad they opened their traffic system back up to the public! Check it out here: http://10x.at/5i4w