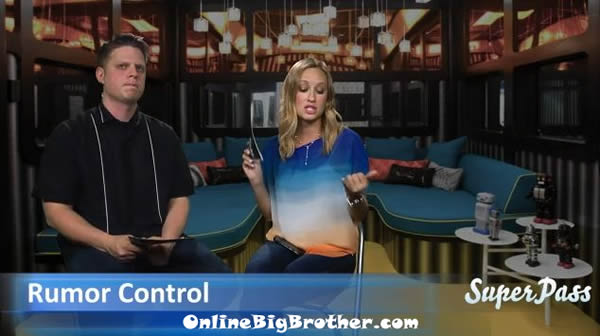 The SuperPass Rumor Control is an exclusive live segment that you have access to with your Big Brother Live Feeds. The rumor control segments are live, but you can re-watch them at any time.

The rumor control segment begins with Chelsia and Laremy introducing the show. Chelsia says that both Rachel and Janelle aren’t there for the show today. She says that they don’t have any guests for the show, but then corrects her statement and says that they have one guest. Laremy is the man behind the pre-season interviews and today he is going to give inside information about the Big Brother 14 cast.
Chelsia says that Mobile for Iso devices goes live on July 12th and you do not need Flash to play the video. (You do not need to download Flash or an App to watch the live feeds.) She says that you will have access to watch the live feeds and the live shows. For android devices you will need Flash 11.1 to run Superpass.
Chelsia talks about the rumor about the mentor’s photo that was released by superpass and she states that they just randomly picked photos because they had to a few days prior. She says they have no idea who will be entering the house. 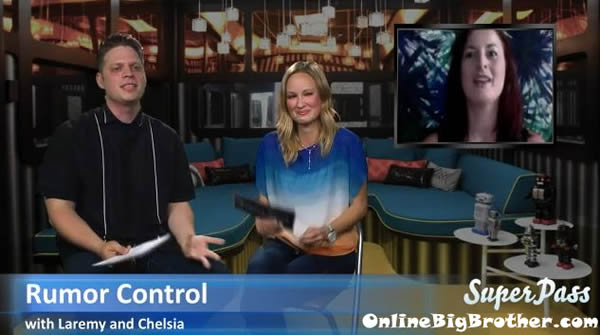 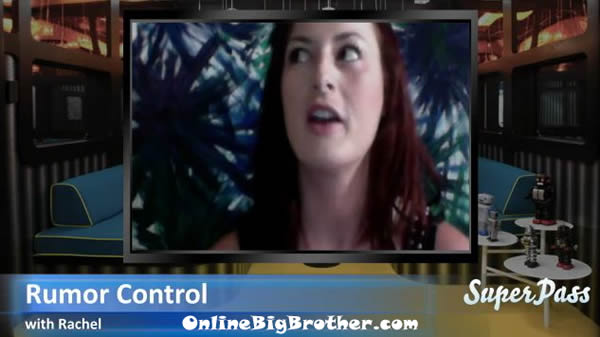 If you don’t already have the Big Brother Live Feeds, NOW is the time to SIGN-UP! Every season before the première SuperPass offers the Early Bird Special where you can save $10 off the regular 3 month subscription price. That allows you to watch the ENTIRE season of Big Brother 14 for only $29.99! Plus you get $30 in music credits, exclusive interviews, and much much more ..so its win win! Sign-up today for the the limited time offer runs out! On July 12th the live feeds go back up to the regular price of $39.99!

I don’t like the mentor twist its lame. I hope one of the 4 twist is if you win HoH you can play in the nex one I never can understand why the HoH had to sit one out.

@Beyonce fan. I’m going to guess that one of the reasons for Big Brother not allowing the house guests who was just HOH,to compete in the next HOH competition has to do with the viewers having a problem with the same person being in power twice in a row.The viewers will probably only like that idea if the house guests that they’re cheering for ends up being the consecutive winner of the HOH competitions.But that’s just one reason that I can think of.

CHELSIA IS ONE OF MY FAVOURITE HOUSEGUESTS! <3

Has anyone else noticed that Danielle didn’t host rumor control part 2? Therefore the houseguest entered the other day so I think she is prolly in the house….I think she is a mentor for sure

Yeah its a good observation, even Chelsia and Rachel both think Daniele is one of the mentors.

Not surprised Rachel is impressed with Ashley, the only HG that was so annoying that I couldn’t watch the whole interview. Looking at the photo, it’s clear that the girl on the right is Janelle. If you look closely at the top of the towel, you can see her blonde hair. I just don’t want the season to be a 4 player chess game, where the mentors make the moves and the newbs are the chess pieces. That would suck. They already had their chance and their moment of glory. Give some new people a chance. What I really want to see is a mutiny against the mentors.

It was bad enough we get Boogie and Britnow they add Dani to the mix what the hell for?
I gotta hear that squeaky voice again plus with Brit always biting her nails and picking at her face.

By the way what the deal with Kara, why would the other hg recognize her???

Google her name. She was Playmate of the Year.

Why does BB always pick a few hg who dont know shit about the game?
🙁

I think kara was some kind of playboy slut

I WISH DANI WOULD BE A MENTOR! but she was blacked out by cbs………

Another season, here we gooo!

I just wished they didn’t include past HGs, mentors or not! They do not need veterans to make this game interesting. No point of an All-Stars if they keep doing this…