8:45am Big Brother wakes up the houseguests for the day. Ragan heads straight for the hammock and goes back to sleep. Monet goes to the backyard couches and lays down. Matt and Lane are in the bedroom talking. Matt sums up the conversation he had with Ragan last night in the hammock. Ragan tells Matt that Brendon and Rachel are suspicious of Matt, that they wanted Ragan to spy on Matt and find out who Matt would put up but Ragan told them he wouldn’t do that. Matt says that Ragan thought they might try to flip the vote and if they did then they wouldn’t even tell Ragan, that it might be a good idea for Matt and Ragan to disassociate for a few days, and that after this week Ragan would not be allies with Brendon and Rachel because he didn’t like how they ran the HoH. Matt tells Lane that Ragan is disgusted by the way that Brendon and Rachel have been running the HOH this week and doesn’t want to be associated with them. 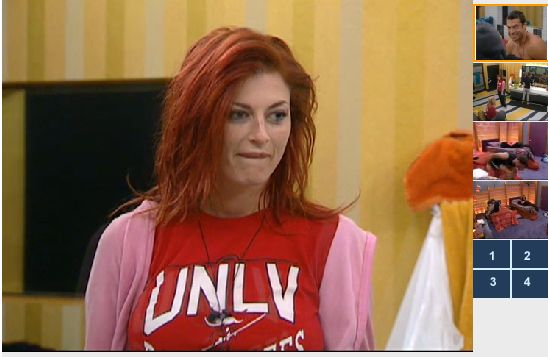 9:15am Ragan and Brendon are sitting at the kitchen counter talking. Ragan is talking about his family life. Enzo, Hayden and Kathy are trying to sleep in the lounge room. Matt goes out to lay in the hammock and Lane comes out to workout. Matt tells Lane more about his conversation with Ragan last night. Matt says that Ragan was getting all teary eyed and shit. Lane says that he has a change of heart about Ragan ….he says that before he may have put Ragan up on the block if he was HOH but not now.

9:20am – 10:10am Matt joins Britney and Monet on the couch. Britney asks Matt if he would rather listen to Brendon talk about how smart he is for 4 hours or go out with Rachel in Vagas but not be able to drink. Matt says I don’t know … probably Vagas. Britney says but you would have to listen to Rachel when shes all drunk. Matt tells her that he can tune anyone out. Britney says that Rachel was trying to be nice to her this morning and told Britney if she ever wanted to talk. Britney jokes and says ummm..yeah if I ever want to know something about valtrex. They talk about how disgusted they are with how Brendon and Rachel are running the HOH. Matt says that Hayden really impressed him with the way he ran the HOH the first week. They all talk about how bad they want to get Brendon and Rachel out next week. The feeds cut out and when they come back Matt is talking about who he would evict. Matt says he would get out Brendon, Kathy and Andrew. Britney says that in her HOH they’re going to give her mood lifters. Matt says he really wants to get HOH. Matt is says he’d want to take Kathy out next because she is playing discussing. Monet says that she doesn’t think Kathy even has the capability to even press a buzzer. Britney comments how entertaining could Kathy be …all she does is smoke and do laundry. Matt says that he just wants to fast forward to Thursday and that he hopes they let them watch the HOH competition if they go out. Britney says she will be sad if either one of them leaves this week. Britney says that if she got HOH there would be self help books in there. Britney says that she knows Annie was the saboteur but that she really thinks they made the wrong decision and that they should have gotten Rachel out. Ragan joins them on the couch. Britney says that if Ragan had just a little less morals he would be banging every one in the house. Ragan says if he had less morals he would have come into the house with crabs and a venereal disease. Ragan says he wouldn’t have even made it into the house if he had anything …with all the blood work the had to do to get into the house. Ragan and Matt go and workout.

Regan is a sell out…a BIG sell out…you don’t sit there claiming you are this honorable person, then go slam the entire room….Regan is making his bed with the wrong people….people ALWAYS see those with power(hoh) as disgusting week 1-2…they did with jesse, and it made NO sense because jesse was just….jesse…why get made about it? its a game, but regan betrayed the ENTIRE other side of the house by telling word for word what went down….thats pretty lousy…thats not a good gameplay move, you win over lane, but risk losing 5 votes? idiot.

Ugh, I give up on this Season. I hope Andrew wins it all – he’s the only one that is staying out of the “Summer Camp” spotlight. Let the kids have fun!

I really hope Ragan does flip on Rachel/Brenden. The other side needs as many votes as they can get. I really hope R/B are up on the block next week.

Yep Ragen is gonna be used and abused by the brigade..he has a big amn crush on the brains..kristen is gonna get the meow meow’s spot come down to the knitty gritty.

i can see wither enzo, lane or brittney winning HOH this week…..

Can’t believe I am going to say this… but I am coming around on Britney. She is foul for sure. You can’t trust her, you can’t respect her, but I just can’t help but laugh at her one liners. She’d scare the hell out of me in real life b/c she is such a back stabber but on TV she is entertaining. Maybe I am just jealous that she comes up with them so effortlessly?

She drives me insane. She is one of those girls I’d make fun of for eating paste however, she is starting to grow on me like a fungus. She is entertaining and I watch to be entertained. I hope she gets hoh next

I agree-I don’t really like Brittney, but right now she is the most entertaining person in the house! CBS should just do a whole show showing her one-liners! That would be better than what we have been seeing. Can you imagine the people that have to edit the live feeds to come up with 3 hours worth of TV entertainment?????? Poor guys!

Plus, if they did a show all on Brittney, when Rachel found out, she would have a melt down since I think the only reason she is in a “showmance” is for camera time……

Britney was absolutely hysterical this afternoon on the live feeds. She was talking about how Nick was hooking up with some skank called Nicole. It was hilarious. And then Brit and Lane were imitating what B&R were saying to each other while working out in the yard. They were coming up with some classic lines.

I finally got through to my friend at CBS. After about 5 minutes of trashing him about the information he gave me (3 sets of relatives in the house) – he apologized and yold me that it was not entirely untrue. One of AG’s staffers purposely leaked the misleading info. Anyway, he told me that AD staffers read every blog about BB. They especially like this one (snaps to you Simon & Dawg). I guess acroos the board many people aren’t very happy with this year’s cast. However, there really is one HG who is linked with a past HG. He said that yesterday he saw Steven (Daigel) from BB10 talking with BB production staffers. He later learned that Daigel is related to Lane and will be making an appearance hosting this week’s HOH competion or next week’s POV. Supposedly he will secretly try to assist Lane in winning a competion. I can see a resemblance between Lane and Steven, however, I don’t know if Lane wouid want the public to know he is related to a “gay” porn star. But as “Ms. Pussyfarts” keeps saying , “expect the unexpected’ ad nauseum.

Thanks for sharing JimiK this is exciting news!

It’s made my day that people involved in the show like this blog. :)

ILL WILL
Reply to  jimik60

“expect the unexpected” she said that shit like 30 times already….. her HOH was useless she didn’t do shit but get out monet which everybody wanted already… she didn’t shake up anything the BB house is still as smooth as it’s been…. im gonna start calling rachel,brendon,kathy, and kristen “Team Delusional” because they have done nothing but make up shit about everything and everyone and they believe the shit they say….

Rockstar
Reply to  ILL WILL

this early in the game, there is no possible way to shake up the house

From day one, I always thought that Lane looked a lot like Steve Daigle. I even put the two pics of them next to each other and the resemblance is there.
I guess it wasn’t my imagination.

Can someone update me on Hayden. Did he tell the brigade about the conversation up in the HOH room with the other side of the house? What became of all of that? Was it on the live feeds or did BB cut that out to show on live TV? Let me know – dying to know…