Dan Gheesling — the guy who won “Big Brother 10” — scored another reality victory this weekend when he popped the question to his GF during a high school football game … and she said yes! 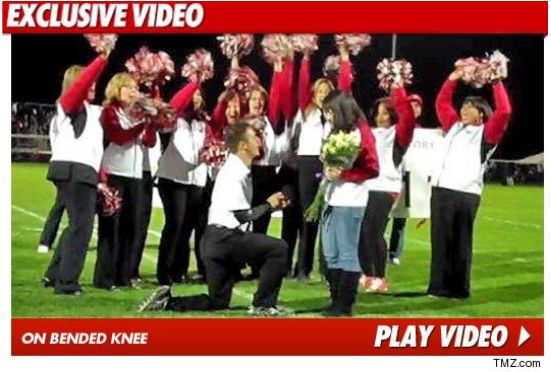 It all went down Saturday night, when Dan — an asst. coach at St. Mary’s Prep in Michigan — orchestrated a little halftime surprise for his girlfriend Chelsea … who works with the cheerleading squad.

After shooing away the team mascot, Dan — who scored the $500,000 grand prize on “BB10” — dropped to one knee and whipped out a 2-carat diamond ring in front of a massive crowd.

We’re told D&C are planning to tie the knot next summer.

He had a different girlfriend when he was on BB, right? I want to say her name was Monica?

Whatever happened to Monica.

It’s nice to see at least one former houseguest (and winner at that) in a happy and positive light.

I really liked Dan when he was on the show, and I hope his future marriage is a success.