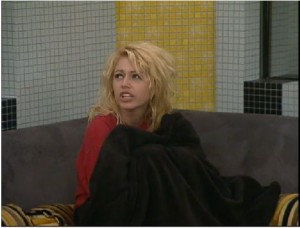 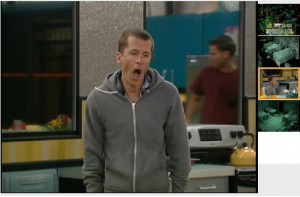 8:30am The feeds cut out and when they come back Big Brother has woken up the houseguests for the day. Britney is sitting on the bathroom couch saying good morning the others that come in. Lane told Britney that he wanted to go into the shower first, that he’s never first. He says he has to go to the bathroom first, and when he goes in Britney tells him that when he comes out she’ll be in the shower. Lane starts bugging Britney and she tells him to just let her wake up and that she’s sleepy …just let me be sleepy. Lane then goes into the shower. 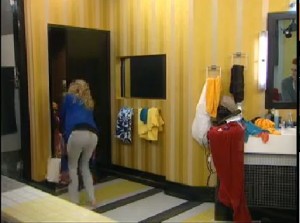 Annie joins Britney on the couch and they complain about Lane and how guys are quick in the shower, but that girls take longer because they have to wash their hair. Ragan, Annie, Brendon, Britney, and Lane are all now in the bathroom. They are talking about past seasons of Big Brother and houseguests. They talk about Chima calling Russell a terrorist.  The houseguests are on an indoor lockdown. The houseguests think that the Power of Veto Competition will happen today at some point. Hayden, Matt, Monet and Enzo are sitting at the Kitchen table talking. Enzo has his sunglasses on.

9am Kristen, Kathy, Britany, Annie and Rachel are in the bathroom. Kristen didn’t know that Britany was going to the washroom and she opened up the washroom door while Britney was on the toilet. Kristen said SORRY …I didn’t see anything!! 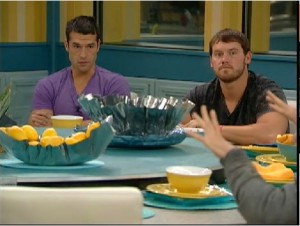 Natalie was getting a ring from her boyfriend but was wearing Jessie’s t-shirt.  That if Natalie was asked by her boyfriend to marry him she was like ..Hell ya!  Lets get some sushi!  Hell YEAH!!

925am Ragan, Lane, and Brendon are at the kitchen table talking about past season of Big Brother. Ragan is telling them about Evel Dick and how he would bang pots and pans over the houseguests to wake them up and rattle them before competitions. They then start talking about random stuff. Most of the girls are still in the bathroom getting ready.  The houseguests are all getting ready and making their breakfast…. and slop for the have nots…

Any word on Britney and her “injury”? Is she actually hurt in the feeds or is she fine now and she is just as weak as she looked on the show last night? Damn I hope she is not another Jordan for this year, doing nothing and squeaking through.
Is Enzo as bad in the live feeds as he appeared on the show.

That would be crazy if brit is the sab. ( falling down almost sabotaged her team) Never know- personally I don’t think she is, but it would definately be a surprise if it was. I still say Kathy or maybe Matt. I can’t wait to see that pov competition

How is Enzo and Lane buddy buddy? Redneck and jersey boy?
Hope Rachel doesn’t leave so soon, She is one of the few flashing her personality (& maybe her boobs soon, even tho I’m a straight girl) and so easy to laugh at, she needs to be here to keep it from being boring. At least Andrew is doing something, even if its davening his prayers and he is TRYING to be funny and it annoys people, good god it is only week one people, how disappointing.

I think Annie may be the last girl standing….unless she is the sneaky sabatour