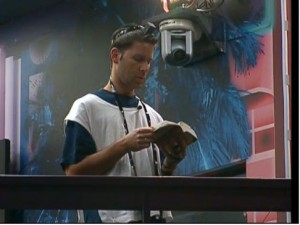 6am – 6:15am Andrew has woken up and is walking around the kitchen and then off to the bathroom. He then goes up to the HoH balcony and starts doing his Jewish ritual. He’s standing on the balcony reading his Jewish book and rocking back and forth…. After he is done his ritual goes into the HoH room and wakes up Hayden. Andrew is really worried about leaving. He keeps saying over and over again how worried he is about going home. Andrew tells Hayden that he is not the saboteur and that he really wants to stay. Andrew tells Hayden that he knows that when he walks into a room he knows people are talking about him being the saboteur. Andrew tells Hayden that he wants Matt out next week. Andrew says that the two people he doesn’t like are Matt and Britney. Andrew says that those two are on his target list. Then he says that Brandon thinks he is taking him off the block but that he will not take Brandon off the block if he wins the power of veto. Andrew says that if there’s a slop pass hes taking it obviously. Andrew keeps telling Hayden that he likes him and that he trusts him. Hayden says that he likes Andrew and that he’s told people that… Andrew interrupts him and tells him not to tell people and it will put a target on his back. Andrew says that he wants to make a deal with Hayden and says he only trusts him and Kristen. Andrew then tells Hayden to go back to sleep and heads back to bed. 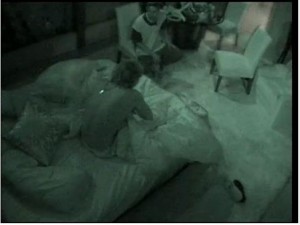 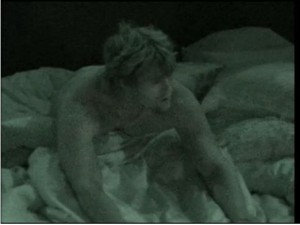 Yeah, that’s the way to get in good with the HOH. Wake him up at the crack of dawn and tell him you want to get rid of one of his closest allies. Good thinking, Andrew. I thought he had game, but now I see he is just lame.

Awesome! glad you guys are back! Love this site. Followed you last season, you have the best bb site with the latest info. So who are people thinking is the one sabotaging the game?

Good morning Dawg and Simon, good to see ya’ll again. At least I waited until it wasn’t the butt crack of dawn :) Looking forward to the season with you all…….