1025am – 12pm Rachel and Britney are in the kitchen talking about random stuff. Andrew is up near the HOH room eating something and playing chess with himself. Kristen and Kathy are laying out on the lounger trying to nap.  In the kitchen Britney and Rachel are talking about the iPad and the Kindle. Britney says that her mom has a kindle but would never buy one herself because she thinks they are too expensive and it won’t pay for itself. Britney says that she only reads one book at a time anyways so why would she need to carry around something that has numerous books on it. Brendon joins in on their conversation. The subject turns to the twilight series. They then start talking about the Big Brother house and how different it looks from what they though it would be like. 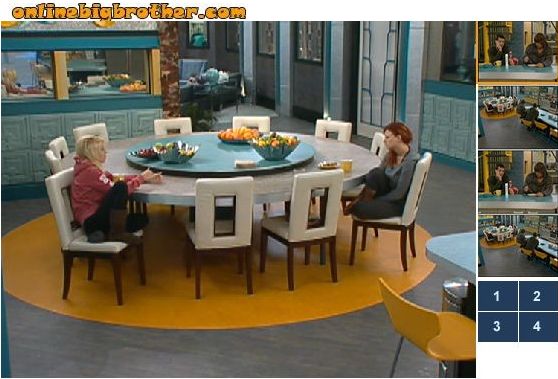 Rachel leaves to go to the bathroom. Kathy joins them in the kitchen. Kathy says that she really doesn’t want to be booted. Ragan joins them. Britney asks if Ragan if he is okay, because it looks like he is having a bad day. Ragan says that he just doesn’t want to eat slop. Ragan mentions that Kathy looks down. Ragan asks are you okay? Ragan and Britney reassure Kathy that she isn’t going any where. Ragan says trust me, I would pee my pants if you were voted out. Kathy leaves and to have a smoke and then lays down to take a nap in the lounge room where Andrew is already sleeping. In the kitchen Ragan, Britney and Rachel are all talking about school and Ragan tells them about how he teaches his students. They discuss tests in schools and then Ragan and Rachel start talking about psychology. Meanwhile Brendon has been on the elliptical for the last hour. Rachel, Ragan and Britney talk about being in sequester. Rachel says that she hates being alone and craves attention from others. They talk about how emotionally draining to be in the house… and all they think about is the game and being in there. Britney says that once you are in this house you only exist in this house, we exist one way only. Ragan says that they only have one role in the house.. they are a houseguest.

12:10pm Enzo and Hayden out on the backyard couches dreaming about winning the next HOH…

he would pee his pants if kathy was voted, out? think he might wanna get the weak bladder checked? LOL

I hope Kathy gets voted out JUST so I can watch Raygayn pee his pants. I’m not a fan of the vomitmances this year between R/B or H/K. Maybe if Kristen wasn’t hootchie-ing around behind her bf’s back I could think it was sweet.

I’m surprised at how little Kristen gets called out for that. She was worried about coming off like she was stuck up … which is exactly how she appears. She must get called that often. But betraying her boyfriend and laying around making out with someone else when she KNOWS her boyfriend is watching everything … not cool and, yes, very hoochie.

Interesting, I called it a BARFMANCE, but it didnt catch on…

Mr. Don't Give a F**k
Reply to  apples2apples

word it don’t matter if she only was with him for a month, because if it was a man with a women at home even if he known her for a month he would be considered cheating on her by all women watching( more of women’s pathetic “double standards” when their the ones doing wrong its OK but if it’s a man it’s wrong), they should, break-off all relationships b4 going in the house because you never know whats gonna happen…… hayden and kristen are kinda cute, but rachel and brendon are just wrong, him being a pussy and her being a skank dressing any kinda way around a bunch of men, whine thousands watch…

Your comment seems a little misogynistic… why would you end a relationship to go on a television show? Because you’re a girl and men are going to hit on you? What? That is too old fashioned to think that people haven’t got free will to make decisions regarding who they do and don’t want to be with…. you can meet someone any day, anyhow, any place if you are in the frame of mind to stray. Or, you can stay and love the one your with….

so your OK with your man cheating on you??? are you that awesome???

I agree. Also its good to remind ourselves that all reality is semi-suspended in the house. Eliminating all contact with the real world and creating an environment of just the other housemates, I can easily understand the wandering away from a short-term previous relationship. Its as if they are the only people in their worlds right now. I also think most all people, man or woman would jump at the chance to go on a romantic adventure if one presented itself.

Mr. Don't Give a F**k
Reply to  apples2apples

if ragan peed his pants julie would fall out laughing LOL

She was only with the guy for two months prior to coming on the show. Yes, it seems so wrong BUT we don’t know what he’s doing while she is there! Do you really know someone after 2 months? Oh wait, Rachel and Brendon have each other figured out already! Must be a devine intervention!

Did I just read that Andrew asked Hayden if anyone knew about their alliance? Didn’t catch it on live feed – read on the BB app. Can anyone confirm this? If so, that is CRAZY!!!

OUTSTANDING!
Simon, you and Dawg keep making this site better and better, for which we are all very appreciative.
You both deserve the honor of winning the $500K instead of these houseguests!

Is that Lane killing someone in the above pic?