9:10am Big Brother wakes up the houseguests.  Lane, Enzo and Kathy are laying on the couch in the backyard.  Rachel is making breakfast in the kitchen while Brendon cleans dishes.  Brendon asks Rachel why she didn’t give him a kiss goodnight.  Rachel asks why is it always her that needs to go to him.  Brendon says it isn’t he just would have liked a kiss.  Rachel asks why is everything a game to you. Brendon says because everything is a game.  Brendon then kisses her.  Brendon asks Rachel why shes always making breakfast for everyone, and that she doesn’t need to.  Rachel says because she likes making breakfast and because she’s bored.  Rachel says that she needs to talk to Brendon about something later.  Rachel says that she had a dream last night that Andrew could mind control her and Brendon.  She says there was a dot on her forehead and that meant he could control her. 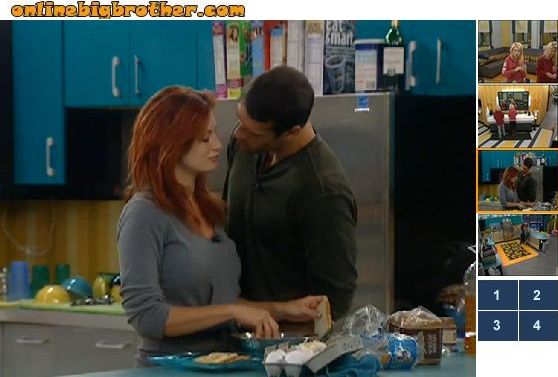 9:40am – 10:10am Rachel, Kristen, Hayden and Britney all sit down at the kitchen table to eat the French toast that Rachel made.  Hayden and Brendon talk up at the bar in the kitchen.  At the table Britney, Rachel and Kristen talk about really random stuff like Christmas decorating, Martha Stewart, kids… Rachel starts talking about this person in Vegas that has a three year old that swears and is out of control.  Rachel says that this person talks about how she wishes she never had her little girl.  Britney talks about a friend she knows that had a child and she was the type of person that you would have thought should never have kids.  Britney says that she is the best mom, and she never would have thought it.  Britney says that little 15year old boys have porn stashes and she had wedding magazines.

Back in the day I would read all my boyfriend’s Penthouse magazines and get all crazed by the time he came home from work. He was 23 and I was 15…. sick I know, but that is how I rolled. We were together for 3 years and I turned 18 and started dating my own age boys. Now I date only men 10-15 years younger and not by choice…I guess I am just immature.
On topic, I think Andrew and his stories and wandering in on B&R all the time is very pervy… I think he has “issues”… sexual ones!

Thank you again for keeping this site up and running. This year especially, I’ve gotten tons more of enjoyment out of reading your posts rather than watching these particularly disappointing people in real time. Last night, for example, I totally gave up after about ten minutes of BBAD and decided that it would be more entertaining to go clean my stove and scrub the toilet, knowing you’d cover all the best parts this season has to offer. And speaking of best parts, there’s still not much to choose from, thanks to this cast, but you miraculously manage to find the more important stuff and report it here for us. So when I complain here so much this season, please don’t think I’m referring to you who keep this site going… you’re the only reason I still watch the show!

We’re glad you like the site.. this season it’s all about finding the best tidbits. We have a new addition coming to the site hopefully tonight. I hope it all works out it’s going to be cool

Can’t wait to see the new addition Simon….it’ll give me motivation to get into work in the morning!!

I’m in total agreement with this post. The websites about BB are MUCH more exciting than the show – and yours is one of the best! Thanks for all your work!

Due to an exhausting work load, being out of town with the work, and other circumstances, I find myself missing shows this season, most of them, and I come here to see what has been missed. I then go to ONDEMAND and watch the show. Thanks for this site… it is at the top of my search list for BigBrother info. Great work!!!!!!!!!! CBS should give you a shout out…* goes back to catching up on all that has been missed since Sunday*

awww, is poor brendon on his period? lollll

Brendon acts like these two have been together for six months or something. Too bad Rachel has fallen for this guy over the game. Maybe she’ll wake up and go team up with the girls.lol. Wishful thinking. And I agree great updates on this site. I had no intention on following this season until I start reading the posts and comments. Very entertaining!

Sometimes two people just have a connection and everything else is secondary in their lives after that…. I think we are in for a long lovefest between these two. Game be damned… they want only each other. Can’t believe they aren’t going for it in the shower of something…

I personally don’t think the relationship is going to last. She is very immature and you know new relationship. . . they are gung-ho and then they fissle out as two people get to know each other better. I think that is going to happen to these two.

OOOOO SIMON WHAT IS IT? By the way you should try polls to see who the general populations fav houseguests r. It seems in my chatting and reading enzo brit ragan and lane are the favs (they r mine as well)….but it would be interesting to see.

My favorites to watch are: Ragan ( smart and low-key but on point to game play)
Britney ( she knows the game AND is fighting to stay, + she’s funny!)
Lane ( not as dumb as you first think… playing the game well)

My favs are in no particular order (It’s a big list so far) Kristen, Hayden, Lane, Brit, and Meow Meow.. Ragan was on the list but I really can’t stand him anymore. Matt needs to stop touching his dink, Brendon needs to dump Rachel, Rachel just needs some work (not plastics surgery kind more the mental kind), kathy is blah, Andrew is Blah

Yes, I agree,meowmeow is a good character on the show but how come he didn’t know how they do and double eviction? That worries me for his game play.

what Ive noticed the past 3 seasons very few of them studied the show, i mean don’t production give them tapes to review while in sequester b4 they enter the house????

If I had to be in this house for 3 months I would study every tape I could and decide on a strategy based on successful outcomes…. then I would get voted out the 1st week! Ha!!! My favorite players have all been in your face, balls to the walls, confrontational and lack any tolerance for liars. I would confront all shady behavior… yeah, I would be gone first!
Favorite historical players were: Dr. Will, Evil Dick, Janelle, Daughter of Evil Dick… but I hated her most of the show…

I M WITH YOU SIMON…. RAGAN IS DRIVING ME NUTS. I AM SO SICK OF HEARING HIS PAST BB KNOWLEDGE. WHO CARES. PLAY A NEW GAME. HIS VOICE IS LIKE NAILS ON A CHALK BOARD

He just seems to know the game really well… but I guess it could get annoying if you had to live with him. I love talking BigBrother with my Mom because she never misses a season and we have very different tastes in what drives us nuts. I didn’t like Ronnie at all… those characters make me squeamish.

????? Is that what Simon wrote about Hayden? I think he might have been listing his FAVORITE players of the game.

I M WITH YOU SIMON……I WISH RAGAN WOULD STOP WITH HIS KNOWLEDGE OF PAST BB HOUSEGUEST..ENOUGH ALREADY WE GET IT YOU KNOW THE GAME. JUST PLAY THIS SEASON AND STOP WITH THE LECTURING. HIS VOICE IS LIKE FINGERNAILS ON A CHALK BOARD

The interruption with the vacuum cleaner was straight up creepy…. who vacuums between 2 people grinding on a chair! And why didn’t Brendon or Rachel tell him to leave them alone and get the hell out of there.
I get the feeling the Kosher Doctor is a peeping Tom back home and likes to lick toes in his spare time.

To buddhistgirl: AR is Arkansas NOT Arizona AZ

My comment is why when they are both from ARKANSAS is one abbreviated ARK and the other abbreviated AR? Do you understand my point now?

They both wear Arkansas shirts but that is too obvious. Matt and someone I think.

I keep looking at Matt and Ragan…. and someone mentioned Brendan and Andrew…. if this is a false lead I am going to be mad. BB Grandma said they already cleared it up, but I think it is a real clue. I have been studying the distance between Kathy and Kristen…. I wonder if she named all her kids with “k” names… hmmmmmmmm…. something to think about.

buddhistgirl69, I was catching up on comments this afternoon and I saw this one from you. I just wanted to say that Simon and I got a message from someone on here that said they knew Britney personally and Kathy is not her mother. Now, I don’t know if that was a true statement but they thought they should tell us since so many were questioning it. Was that the truth? I don’t know but I thought I would share that with you, too. I don’t remember where or when that comment was but I think it was several days ago.

Have any 1 notice kathy and brit both have the same dimples. sorry i forget to put my name on the comment above

I pity the fools

Did you people not see that the rumor that two people know eachother was made up to cause confusion by Annie. None of them knew eachother before coming into the house. Stop wasting time discussing it.

I’m wondering if production tells them to talk about who that want out next week so much. It seems this years’ cast is more obsessed with that than previous years. The players that get the farthest always talk about who they want to save, not eliminate.

I would prefer if they found people who never saw a previous episode. Human nature is interesting enough for me. Trying to figure this years’ “game” based on the way other years have gone is just like picking lottery numbers based on last years drawings.

The game is the game, and it never works out the way they plan.

House guests don’t eat the french toast.
They may be infused with BG’s various STDs