12:45pm Matt comes into the HOH room to talk to Brendon and Rachel. Ragan stays while Matt starts telling Brendon and Rachel what he needed to tell them. Matt says so here’s the deal. Matt says he already told Ragan. Matt says that he is 100% positive that Britney is the saboteur. She was the first one in the house… she took the ideal bed … Then we had the hotdog things and she just dropped and hurt her knee. He says then she was the one to point out the locker room door. Matt says its like what Ragan was saying how magicians distract people to do the trick. Matt says that’s exactly what she did …and she was the only one to point out the lock on the door. Matt says that then he was up in the HOH when he heard who Hayden was nominating. And 20minutes later she was spreading it and starting shit. Matt says that’s when he first started watching her. Matt says then the caramel competition how she was told there was a tooth right there and she still didn’t go get it. Like how do you not go get it when someone points it out to you. Matt says then she went and stirred up shit with Andrew last night …like why the fuck would you do that!? He say a) you didn’t even see it and b) why the fuck would you stir up shit there was no need to!! Matt tells them to not say anything to Britney or anyone else …. Rachel gets called into the diary room. Ragan, Matt and Brendon continue to talk about the game and how it really shows people true colors. 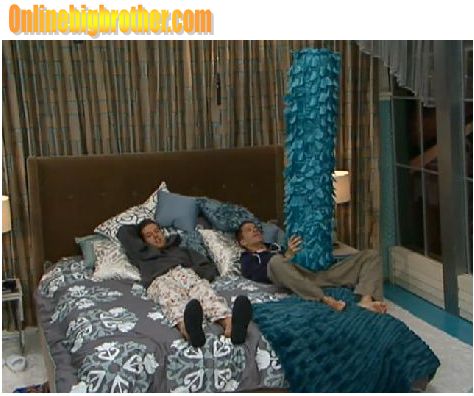 Matt and Ragan are laying on the HOH bed talking to Brendon. Matt has his hand down his pants. Ragan grabs this really large prop from the HOH room and lays on the bed beside Matt. And then Ragan says I want to see Matt sit on this and say that its not big enough for him. They all laugh. They continue to talk about how crazy this game is …its not the real world. Brendon asks Matt what he thinks about Lane. Matt says he’s a nice guy and he is loyal to the house because he was friends with Annie but didn’t even give her the sympathy vote. So at least we know where he stands. Matt says that he works out with him but doesn’t really know that much about him like how he hangs out with or anything. Matt asks if Brendon cut a deal with Hayden after the POV to save Rachel. Brendon says no, no … I just campaigned about him saving her. Brendon says its hard to go through the game with someone that you care about. Brendon says that if Rachel had gone home and he won HOH he would be gunning for Hayden … but it all worked out so he’s not going after Hayden ….right then the feeds cut to TRIVIA…

1:05pm The feeds are showing TRIVIA…. 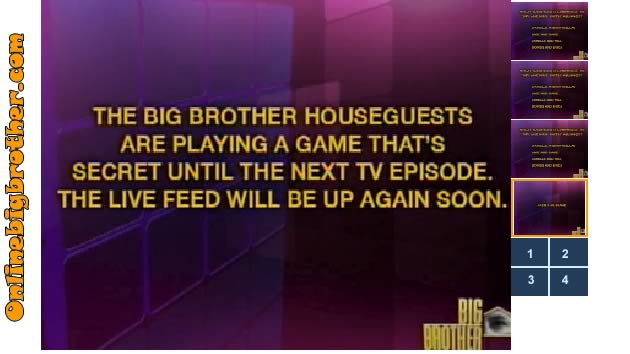 I don’t know if it’s because we are not too far along but so far none of these people really interest me. I am not even interested in the feeds this year. Maybe after a few more episodes but this year so far I am bored.

Last night’s After Dark on Show time was hilarious.
After Rachel won the HOH, she had everyone laughing in stitches.

Matt is going to look like a real idiot Sunday when they tell them Annie was the el salvatore!

Simon, did you hear anything about Annie going to sequester? What is the deal with that? Are they possibly going to bring her back later?

Simon
Reply to  chick from louisiana

Ya shes in sequester .. Like “the Playa” said they may bring one houseguests back or she might be in sequester because her work isn’t complete as El Salvatore

ILL WILL
Reply to  Simon

her work should be complete as she lost the 50k because she didn’t last 5 weeks or did i read the rules wrong?

id love to see her come back in some form

Rockstar
Reply to  ILL WILL

ILL WILL
Reply to  Rockstar

LOL id like to see them bring the president on there, and see how insane the house makes him

I’ve heard one of the possibilities is that the next 3 HGs eliminated are going into sequester and then the HGs vote one back since BB lost one player early on.

well since the house guest found out annie was the sab…….. i doubt they bring her back

The Playa
Reply to  Kyle

yeah they did that wit kaiser sosay, I mean “what up kaser”, on janelle’s bb season

I am the saboteur

I wish they wouldn’t disclose the saboteur to the HG, and just continue the cryptic messages messing with their heads. It would be great if they only disclosed it after week 5.

The sab was a great twist on the game, but it going to end up being stupid and irrelevant like pandora’s box last year. The key Jeff found was basically worthless. The saboteur just locked a door, placed some beeping devices, let loose a bug, and told a few lies. Dumb.

The President would blame everyone else if he lost a comp.

I heard they already told the H/G that Annie was the saboteur & that they were clapping & yelling & junping around & all excited that they got her out first. That’s what I read this afternoon.